On the surface of things, it might not look like people who live in the six blue zones (Ikaria, Greece; Okinawa, Japan; Loma Linda, California; Sardinia, Italy; and Nicoya, Costa Rica) have much in common. But look a little closer and you’ll find that people living in these locations bear some striking similarities, both in lifestyle and healthy habits.

That’s the concept behind researcher Dan Buettner’s popular book Blue Zones, which highlights the fact that people in these tight-knit communities have some of the highest concentrations of centenarians. In fact, according to Buettner’s research, people in the Blue Zones reach age 100 at 10 times greater rates than in the United States.

So what’s their secret? A combination of communal living, religious belief, natural movement, stress management, and healthy dietary patterns appear to increase the chances of reaching that sought-after triple-digit birthday. Here’s a look at how to add a little blue zone energy to your own life — moving to Greece or Italy is optional.

1. Incorporate movement throughout the day.

The physical environments of the blue zones are inherently conducive to movement. In Sardinia, Italy, for example, local shepherds walk their herds an average of five miles per day up and down the island’s mountainous landscape. Other Blue Zone cultures have yet to embrace many of the technological conveniences that take the work out of everyday tasks like housework and gardening — meaning they must exert more physical effort to get them done. Not surprisingly, this extra activity leads to perks like better cardiovascular health and lower rates of cancer.

While most of us can’t suddenly become Sardinian shepherds, we might be able to curate our routines to include more natural movement. Consider: could you make a habit of an after-dinner walk each evening, choose to bike to nearby errands, or start a garden in the backyard?

2. Get involved in your community.

Whether through volunteering, religious membership, or being a part of a close-knit social circle, people in the blue zones are intentional about belonging somewhere. It’s a healthy habit that appears to add years to their lives. According to the blue zones “Power 9”—aka nine signature habits—attending a faith-based service four times per month can add four to 14 years to life expectancy. And the sense of purpose and belonging you might receive from community involvement could be worth up to seven extra candles on your birthday cake.

People living in the blue zones aren’t necessarily vegetarians, but they do tend to follow plant-forward diets. Their emphasis on plant-based foods is so pronounced that Buettner dubbed another one of the Power 9 the “plant slant.” It’s not just any plant-based foods that fit the bill. Beans in particular are the cornerstone of most centenarian diets, according to the Power 9.

“Beans are an important part of a healthy diet, as they combine protein, carbohydrates, fiber, and potent antioxidants, providing a perfect combination of nutrients that not only provide satiety but are protective against chronic disease,” says Greek dietitian Elena Paravantes-Hargitt, RD, founder of the food blog Olive Tomato and author of The Mediterranean Diet Cookbook for Beginners.

To get the most benefits from beans, Paravantes-Hargitt recommends consuming them as the centerpiece of meals. “Ideally, you want to be eating beans as a main course two to three times a week,” she says. Her go-to recipes include thick bean stews and beans sautéed with olive oil, onion, and tomato paste or puree. 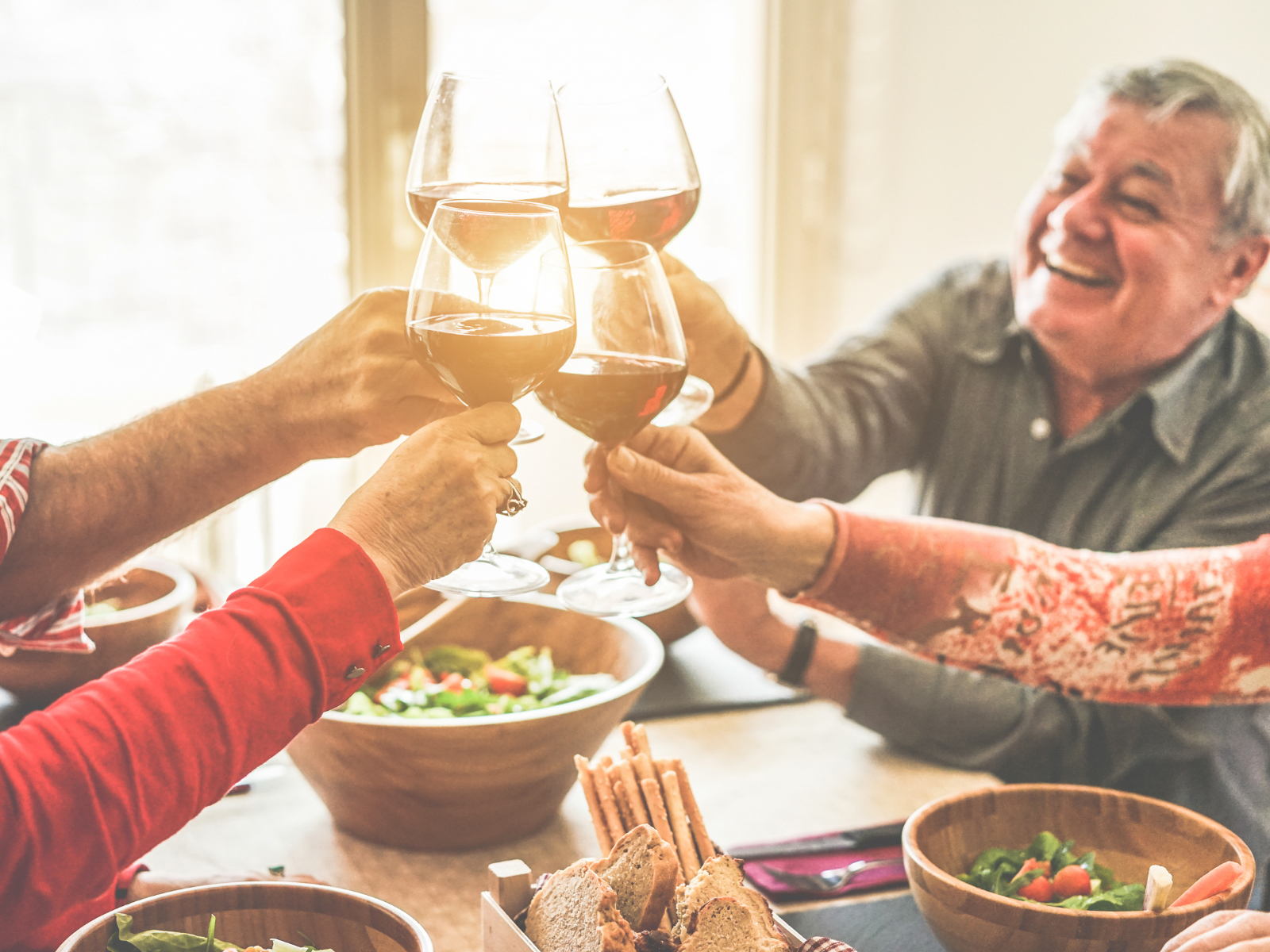 Blue Zone folks’ approach to alcohol is neither to teetotal nor to overdo it. Instead, people in these regions typically consume one to two drinks per day in a social setting or with food. Often, a glass of wine is the signal of the end of the workday and a cue to relax.

Sound like a sweet way to un-wine-d at the end of the day? Consider a regular 5 p.m. happy hour with your co-workers, spouse, or friends. Just keep in mind that an “official” glass of wine is just 5 ounces, not the overly generous pour you might get at the bar.

If you’ve ever visited a Blue Zone yourself, you may have been warmly welcomed to sit down to a meal with family or friends. In these regions, eating communally is a given and may be an important piece of the longevity puzzle.

“We know from studies that there are multiple benefits of families that eat together, particularly for children,” says Paravantes-Hargitt. “For adults, eating with friends and/or family can maintain mental health and provide a feeling of connection, as well as decrease loneliness and isolation. It also helps communication skills.”

Sitting down for leisurely communal meals might be a tall order in a fast-paced 21st-century life. But even small shifts toward meal sharing are a step in the right direction.

“If you are at work or school, set aside time for lunch and meet up with co-workers for a quick bite,” Paravantes-Hargitt says. “At home, lunch can be tricky, but how about making a plan to have a family dinner on weekends and/or a Sunday breakfast every week?”

For those that don’t have family close by, she suggests joining a cooking club where you can cook and dine with like-minded people.

Transport yourself to Sardinia with these 9 Longevity-Promoting Recipes from Italy’s Blue Zone.

6. Don’t eat past the point of fullness

Ever heard of hara hachi bu? It’s the Confucian mantra spoken before meals on the island of Okinawa as a reminder to eat only to the point of about 80% fullness. The idea goes that preventing yourself from overeating not only precludes weight gain, but also keeps you more mindful at mealtimes.

“This practice not only has obvious physical benefits of maintaining a healthy weight, but it also creates and nurtures a healthy relationship with food, since [people in blue zones] trust and listen to their hunger to guide them, instead of being worried about calories, fats, etcetera” Paravantes-Hargitt explains. “The ancient Greeks had a saying ‘metron ariston,’ which translates into ‘everything in moderation,’ and that is true when it comes to people who live in the Blue Zones.”

Read next: People in Blue Zones Eat These 7 Foods  — and They’ve Been Shown to Increase Longevity