9 Recipes That Use Greek Yogurt to Make Delicious, Protein-Rich Meals

Creamy, tangy, and full of health benefits, Greek yogurt has grown to immense popularity and stayed there, and with good reason: it’s an incredibly easy way to add protein and immune-boosting probiotics into your diet. As a bonus, it tastes far more indulgent than its nutritional label denotes, too.

Read next: What’s the Difference Between Greek Yogurt and Regular Yogurt?

Because it’s cheaper per ounce to buy Greek yogurt in a large tub versus a single serving container, many people end up with a lot of extra on hand. Using it up as a granola topping for breakfast everyday is great, but Greek yogurt has the ability to add all of its benefits to every meal of the day, from dinner to dessert. Here, we’ve got nine different recipes that feature Greek yogurt in ways you might not have thought of. 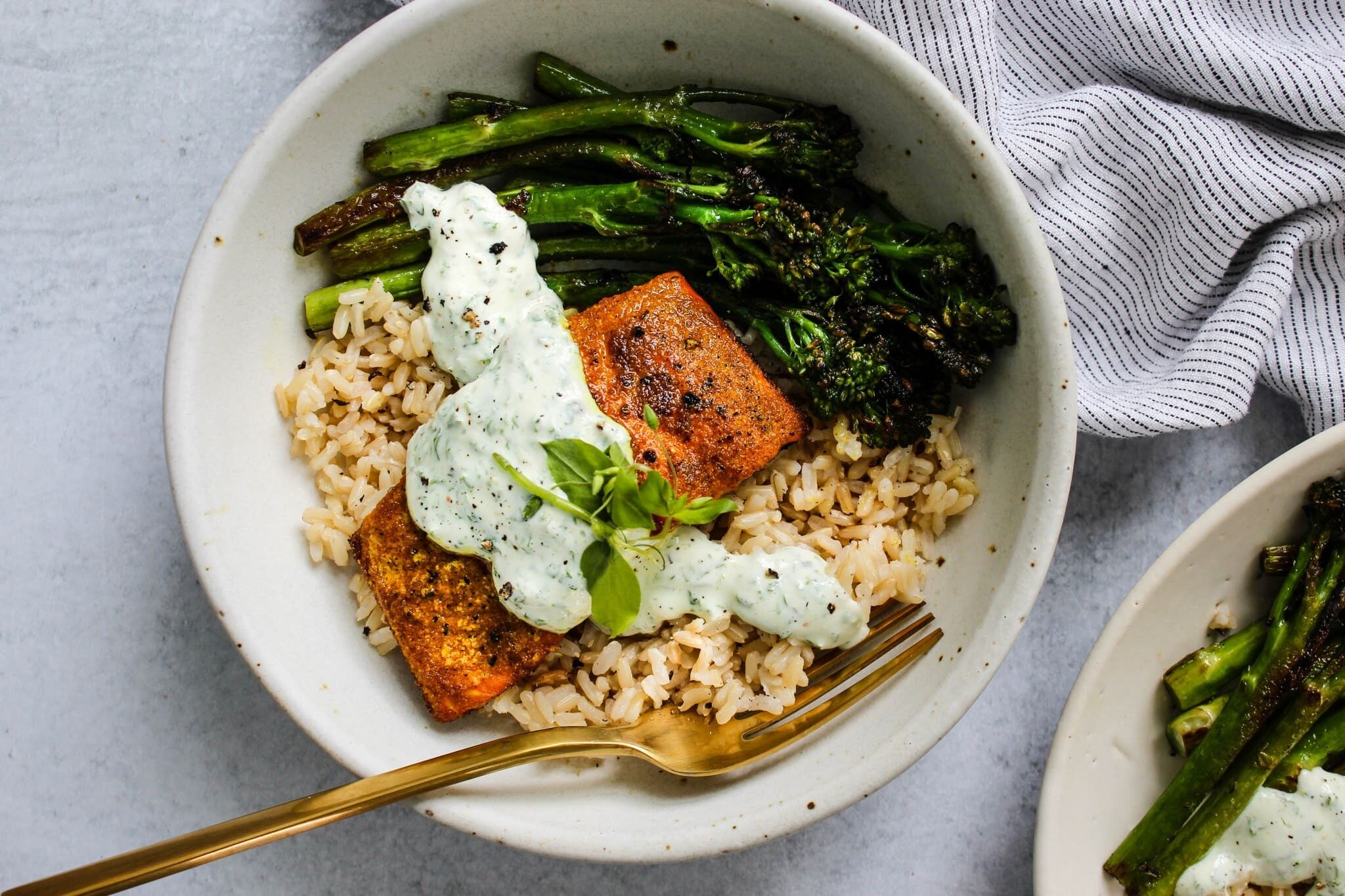 The spice mix for this salmon is vibrant as can be, but it’s the Greek yogurt sauce that really makes the crispy turmeric salmon sing. It employs a heap of fresh parsley, which is an inexpensive way to brighten nearly any dish and pack antioxidants into it. While you might worry that adding lemon juice directly into Greek yogurt would cause it to curdle, that doesn’t happen like it would with cream or milk. 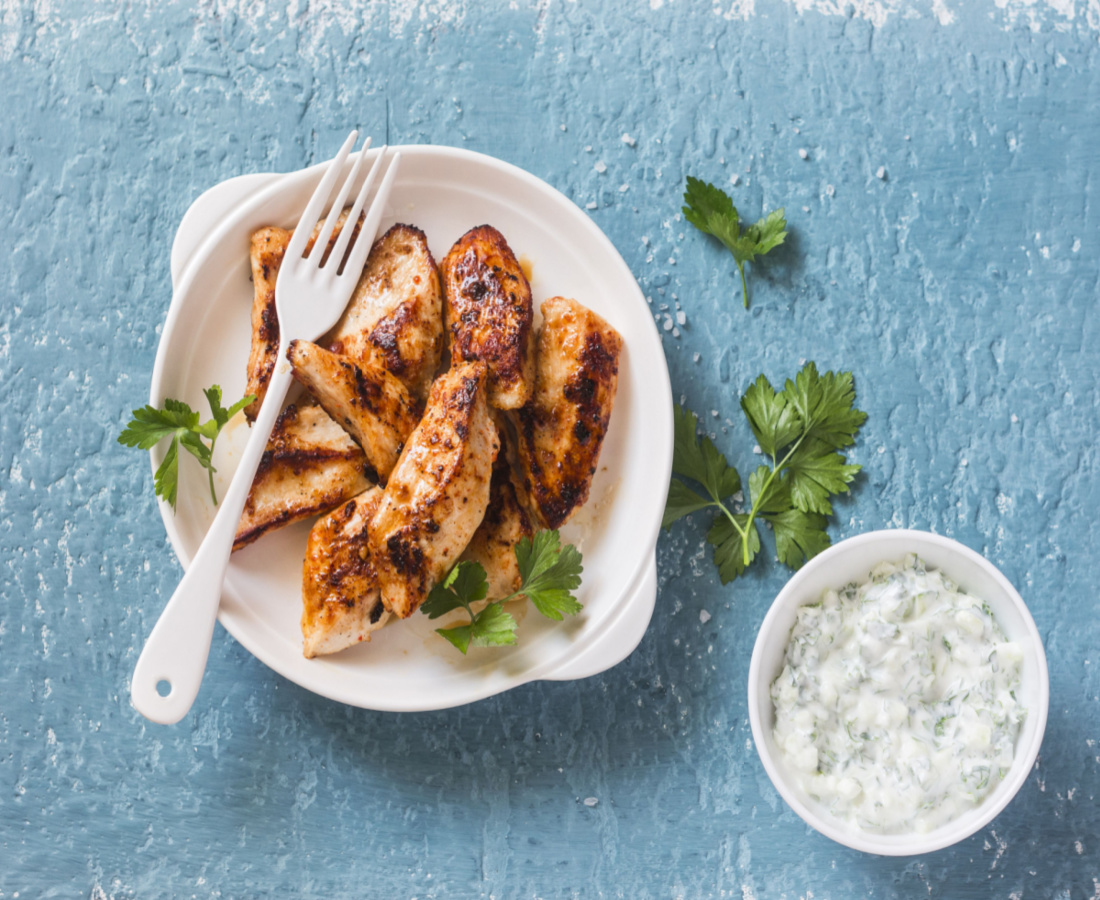 Chicken is a solid protein choice, but it gets made even better when you add a Greek yogurt marinade to it. The marinade will soften the chicken, making it ultra tender. It will also add extra protein. This marinade is chock full of various herbs and spices, from Italian-inspired ones like oregano and thyme to Mediterranean smoked paprika and cumin. A touch of honey cuts through the tang of the yogurt. 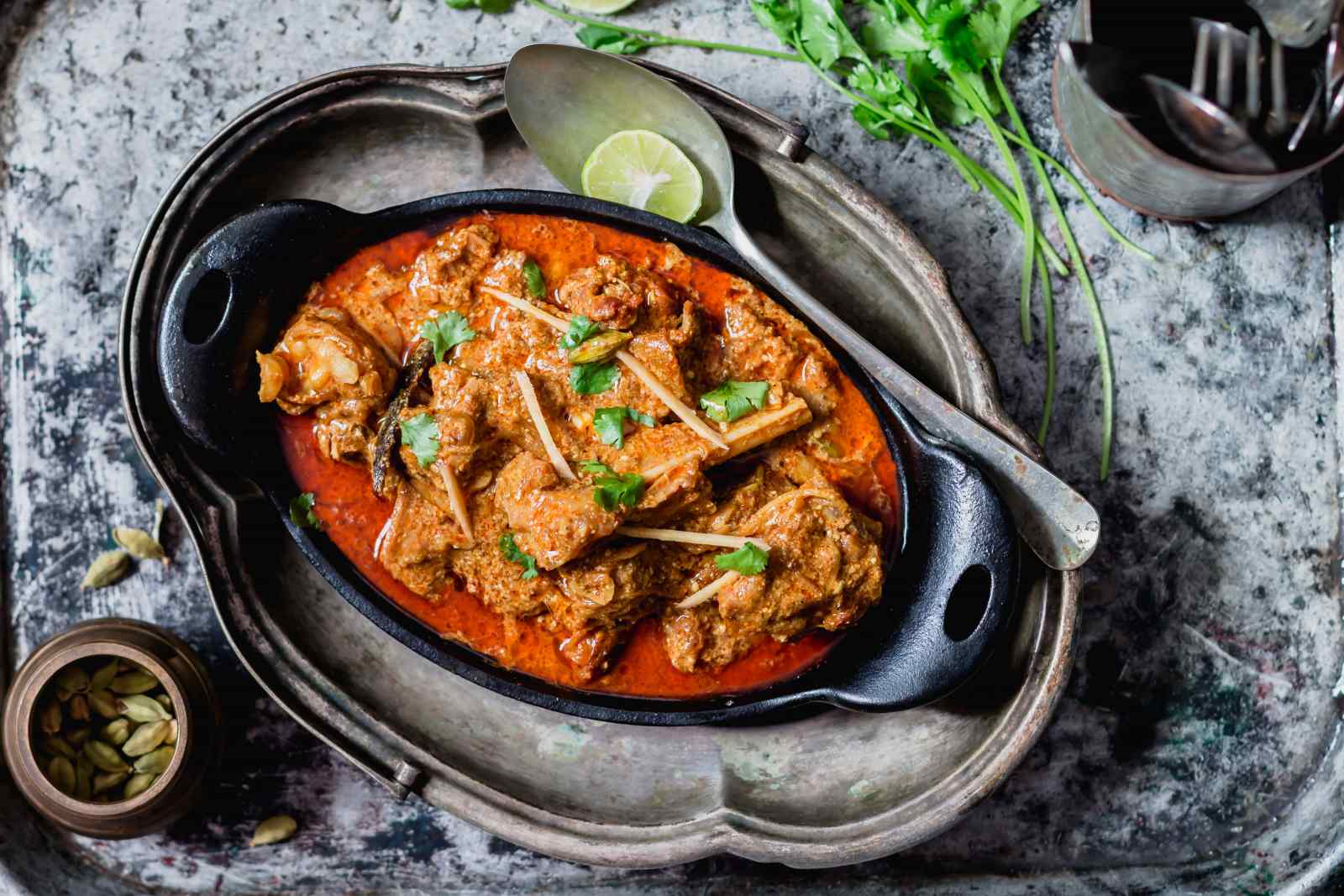 A traditional yogurt lamb curry recipe has you make a thick yogurt yourself, but Greek yogurt is the perfect swap for those of us short on time (and active cultures on hand). If you’ve never used whole spices in a recipe before, you’ll be blown away by the amount of taste they add. Usually you have to saute them and then grind them, which can be a long process, but for this curry you’ll leave them in the sauce whole. Just be sure to eat around them. 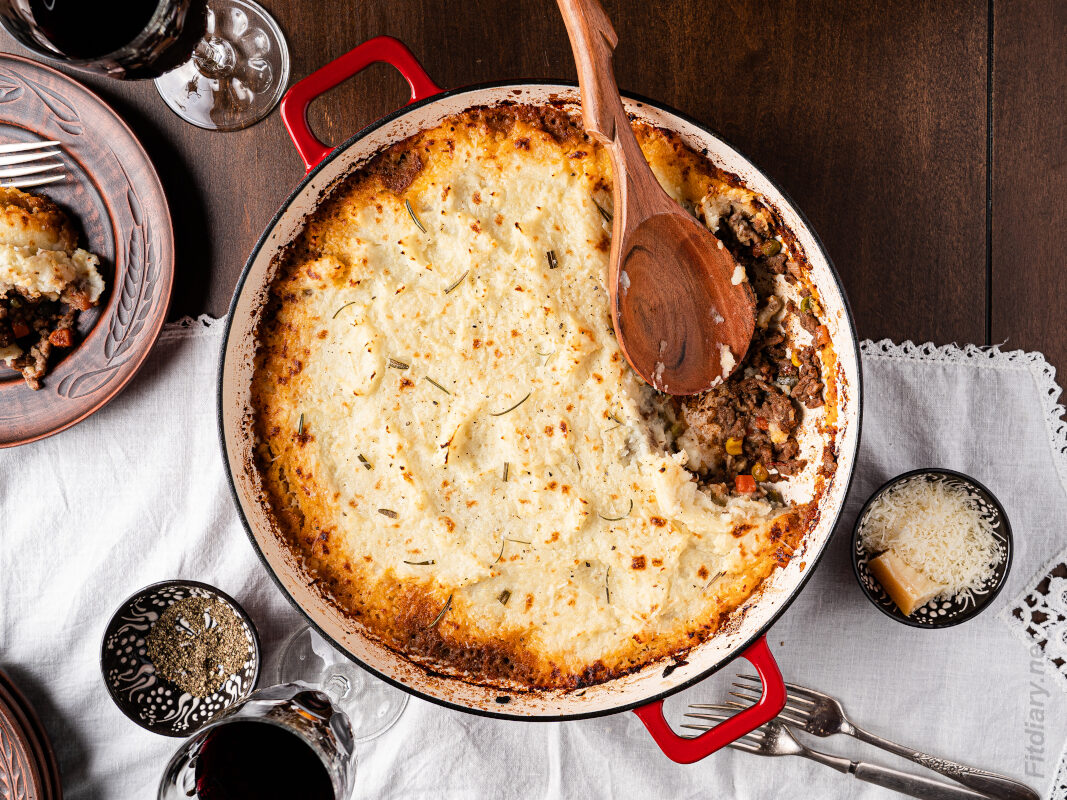 Eating healthfully doesn’t have to be an all or nothing affair, as evidenced with this healthy shepherd’s pie recipe. The meat and potatoes are included as usual, but they’re made healthier with the addition of cauliflower and Greek yogurt for the mash. For the filling, consider using steamed fresh vegetables instead of frozen if you have them available. This is also a fun place to swap out beef for a more nutrient-dense protein like lamb or bison. 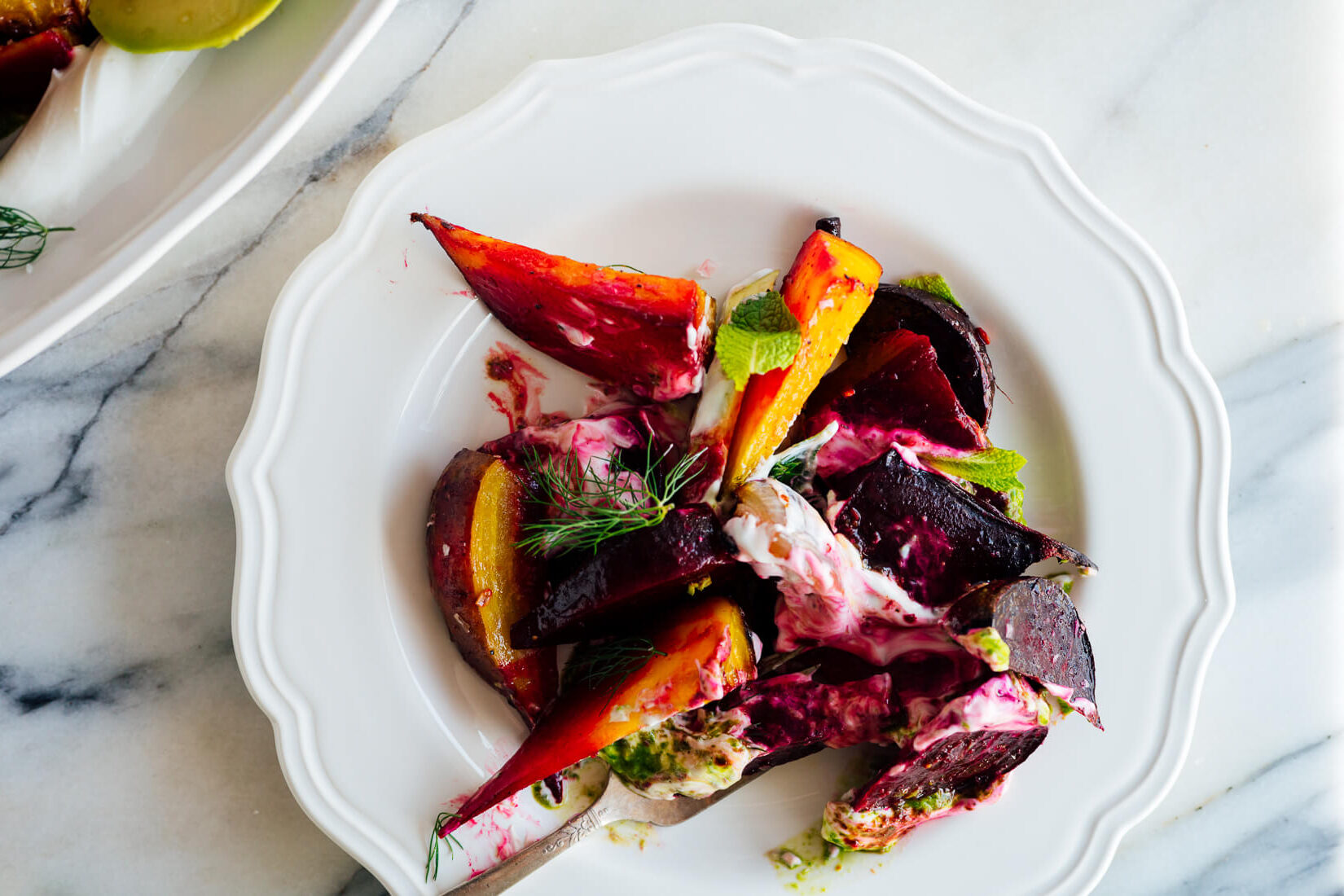 You might think Greek yogurt is as thick as yogurt gets, but this roasted beets recipe has you strain it even further. The result is a yogurt “cheese” that is even richer than the usual version, and it’s heavenly. Here, it’s paired with yellow and red beets, the sweetness of which will perfectly balance the yogurt’s tang. A vinaigrette made with lots of fresh basil pulls the yogurt and beets together, making this recipe useful as a wonderful light vegetarian lunch or a dinner side dish. 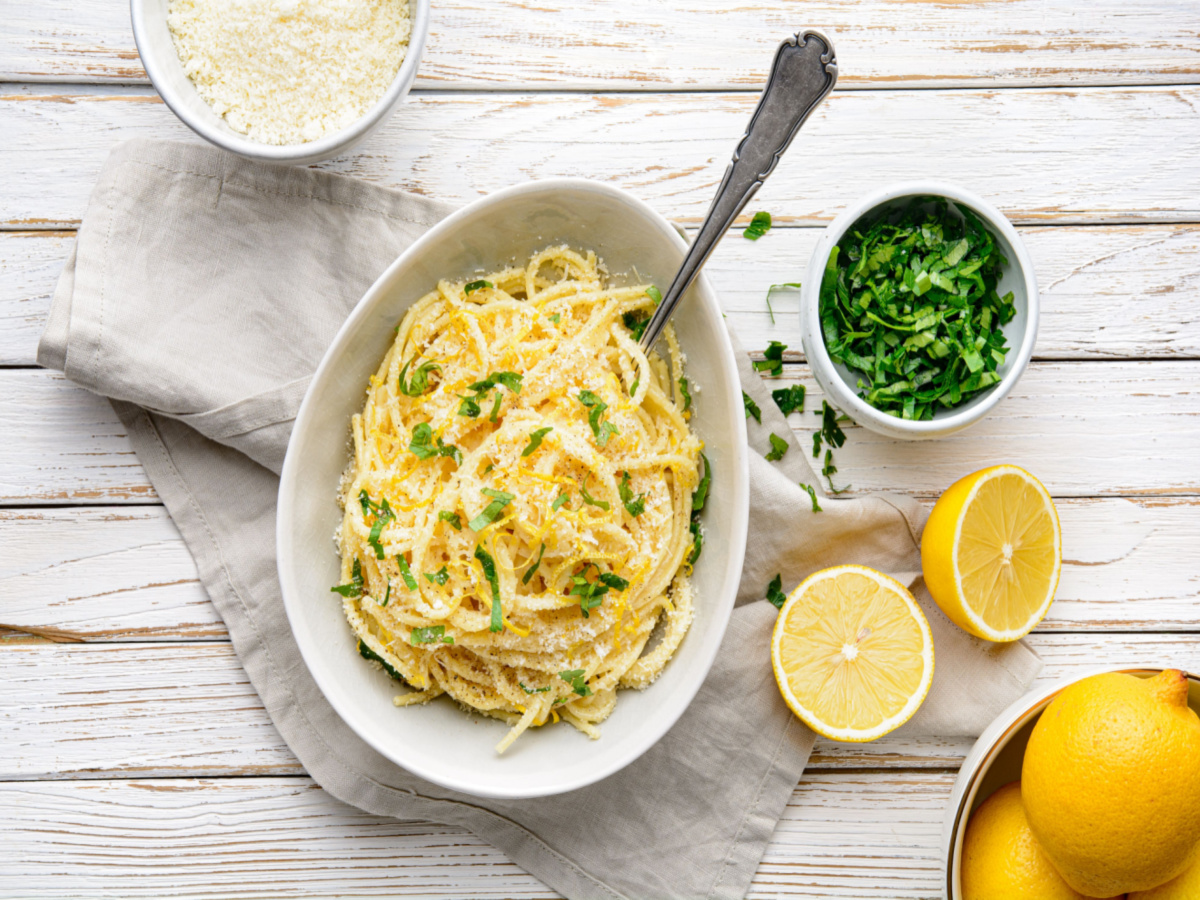 You could use any alternative pasta for this Greek yogurt pasta dish, but there’s nothing wrong with whole wheat pasta, either — especially considering you’re using nonfat Greek yogurt as the base of the sauce for it. Lots of fresh garlic is sautéed with butter and lemon, creating a depth of flavor for this deceptively simple entrée. Also, let’s note that choosing low-fat or whole organic Greek yogurt instead of nonfat would still be a healthy choice, and would make the dish even more satiating. 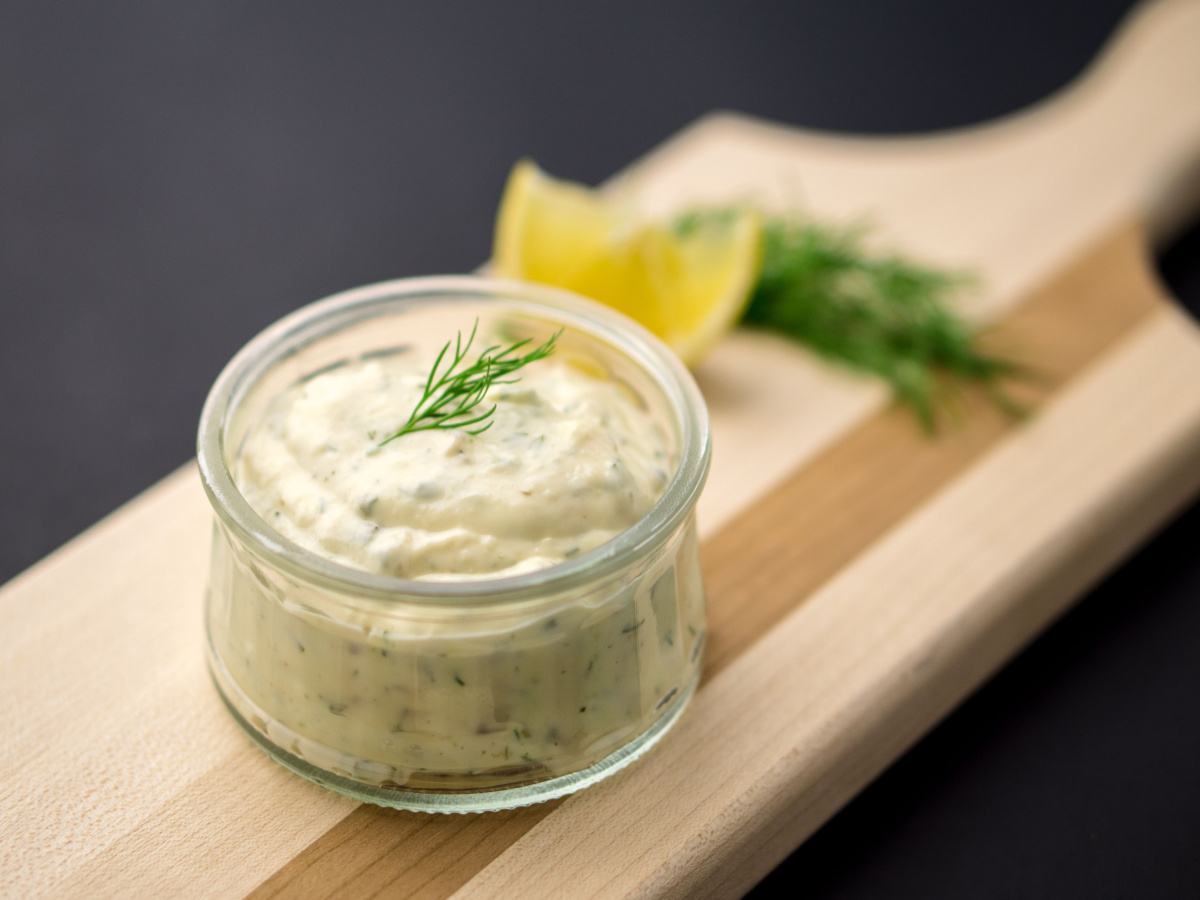 Tartar sauce is undoubtedly a yummy condiment, but it’s typically made with heaps of mayonnaise. Not so with this tartar sauce recipe, which instead uses a base of Greek yogurt and contains no mayo at all. It still has all the flavors you’d expect from a tartar sauce, like capers, dill, cayenne, and dill pickle, so you’ll scarcely notice the swap. Try it on top of baked fish, or in a sandwich as a spread. 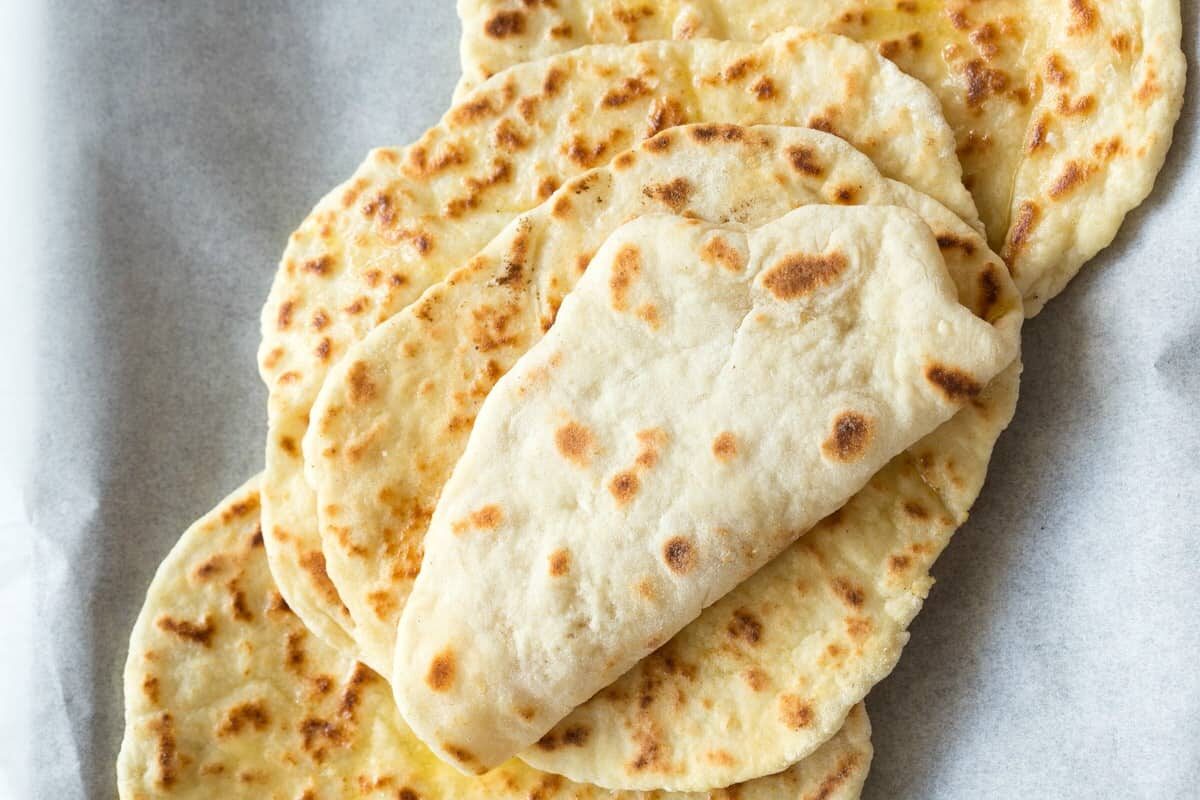 It sounds shocking, but this Greek yogurt flatbread requires only two ingredients. And to add to the shock value, it can be made gluten-free: simply take self-rising flour (which is available gluten free), Greek yogurt, and a pinch of salt, and mix them together into a dough. Roll it out into circles, cook in a pan on the stove, and you’ve got an easy homemade flatbread that’s full of protein. 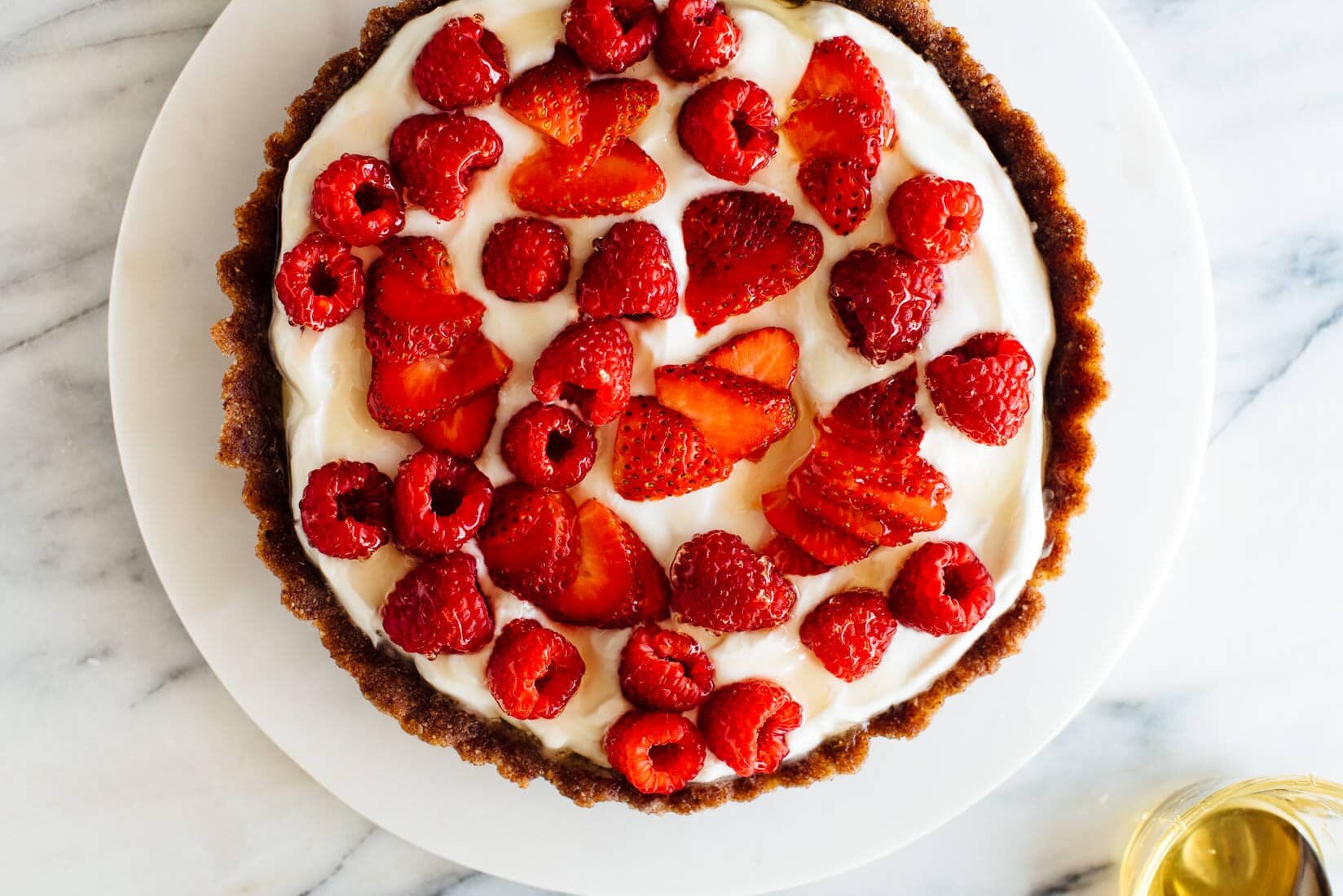 If you thought dessert couldn’t be the most healthful part of a meal, you haven’t tried this no-bake Greek yogurt tart recipe. The crust is made out of dates and pecans, and the filling is composed of Greek yogurt, mixed berries, and a touch of honey. It can be made dairy free and/or vegan through an advised swap of vegan Greek yogurt instead of dairy, and maple syrup for the honey. When you’ve had a light dinner and want a big helping of dessert, this tart is a perfect one to make.