We could probably eat Italian every night of the week. Pizza, pasta, chicken parm — what’s not to love? Except maybe the way you feel after a cheesy, carb-heavy meal. That’s why we’ve found lighter versions of all your favorites. These healthy Italian recipes that deliver all the comfort and flavor you’d expect; plus, healthier swaps mean they’re often loaded with extra nutrition as well. Buon appetito!

1. Healthy Alfredo Sauce Recipe from Show Me the Yummy

This recipe from Show me the Yummy brings leans on broth and and Greek yogurt to bring the flavor and plenty of nutrition, without the overindulgence. We promise you won’t even miss the cream! Serve with your favorite pasta—gluten-free, plant-based or conventional.

Sometimes, you just need a bowl of meatballs. Make these leaner turkey meatballs that still pack plenty of protein into a healthier meatball sub, serve them with spaghetti squash or regular spaghetti, or just eat them as is. A green salad to go with is always a good idea.

If you’re following a vegan diet, or just trying to eat more plant-based foods, this vegan lasagna is for you. It uses tofu in place of ricotta, vegan shredded cheese, and an easy homemade cheese sauce to deliver the ooey-gooey part you love. This recipe calls for vegan ground beef, but you could just as easily load it up with your favorite vegetables.

Chicken is a great source of protein, but it’s often, well, slightly boring. This lighter piccata sauce brings tons of lemony, garlicky flavor, with the brininess of capers and some fresh parsley. It only calls for one tablespoon of butter, and if you want to skip the butter entirely (and use all EVOO), go ahead. You can also use gluten-free flour instead of regular flour, or just skip it altogether. Really this dish is all about the lemon-garlic-caper trifecta.

Sometimes the secret to making something healthier is simply adding vegetables. That’s mostly the case here with chicken parm that goes easy on the cheese and sits on a bed of zucchini noodles. This feels like it’s not going to weigh you down—and it won’t. Even better? It’s actually (truly) ready in 20 minutes.

These stuffed shells use an entire pound of spinach! There are also plenty of options if you want to cut back on the cheese or make it with vegan sour cream instead of ricotta. This wins points for versatility and deliciousness in equal parts.

Bless the simplicity and keeping-it-real nature of this recipe, which calls for turkey instead of beef and whole milk instead of cream.  Smart shortcuts, such as buying good-quality refrigerated pasta, are encouraged here, too. If you want, make it totally vegan with plant-based ground beef.

Shrimp scampi is so timelessly tasty because of butter, and lots of it. This recipe cuts back on the butter, ups the lemon and herbs (easy and healthy moves), and pairs it all with zoodles to bring a seriously lightened-up scampi to the table. Serve with a veggie-based rice like RightRice instead of veggie noodles, if you like.

9. Tuscan Steak with Marinated Cherries from Half Baked Harvest

Yes, we’re talking about steak here with a fried egg on top, which is pretty traditional in Tuscany. The key here is to choose the best-quality egg and best-quality steak. Rubbing the meat with plenty of garlic, rosemary, and olive oil lends tons of flavor. Marinating tomatoes saves even a lackluster off-season selection, and a handful of fresh arugula gives the whole thing some zing. 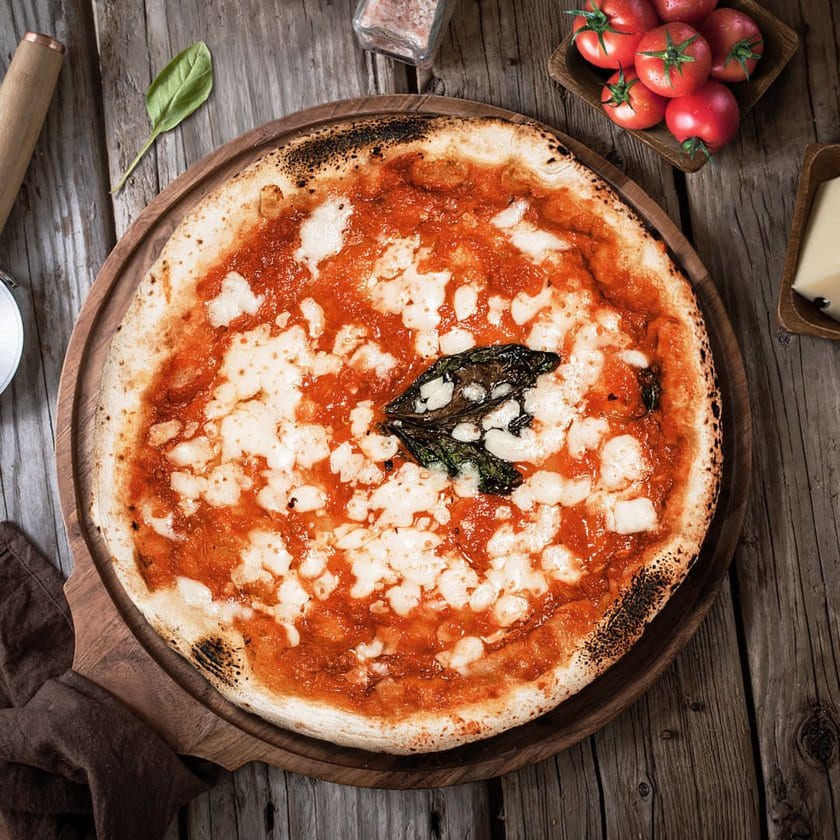 Some people might say that baking a frozen pizza isn’t “actually cooking” and doesn’t count as a “recipe,” but those people should learn to take a breath and relax. Some nights, you’re just not in the mood for all the prepping, cooking, and cleaning up after a big meal, but you still want to enjoy a beautiful dinner — and on those nights, you should treat yourself to a seriously high-quality frozen pizza made by Talia di Napoli. Unlike most frozen pizzas, these are actually made in Italy with seasonally sourced, natural ingredients: extra-virgin olive oil, garden tomatoes, fresh basil, and creamy fior di latte mozzarella. The pizzas are then flash-frozen, preserving their integrity, before they’re shipped right to your door. Frozen pizza may feel like a cheat, but since these are pristinely fresh and made with real, whole ingredients, you can feel good about serving (and eating) them.