When To Buy Organic—And When To Safely Skip It

The arrival of the Environmental Working Group’s annual lists of the Dirty Dozen and Clean Fifteen is the healthy food world equivalent of Hollywood’s early-morning Oscar nominations. Never heard of these lists? The Dirty Dozen are fruits and vegetables that are riddled with pesticide residue, so those are important to buy organic, while the Clean Fifteen are a-ok to buy conventionally farmed. And the list has seen some changes from last year.

How important are these lists? On thousands of conventionally grown produce samples it analyzed, the USDA found 178 different pesticides. If you’re thinking, “I always wash my produce, I’m cool,” we’re sorry to tell you that the pesticides lingered even when fruits and vegetables were washed and even peeled, in some cases.

It would be great to buy all organic, all the time, but that can get expensive and limit your choices. Use the Dirty Dozen list to guide you on the fruits and vegetables most beneficial to buy organic, and then you can be a bit more flexible with the Clean Fifteen.

So go ahead and commit these lists to memory—or print out a pretty PDF to take with you when you shop.

Each of the foods below (listed in pesticide-residue order) tested positive for a number of different pesticides and contained higher concentrations than other produce. More than 98 percent of samples of strawberries, spinach, peaches, nectarines, cherries and apples tested positive for residue of at least one pesticide—a single sample of strawberries showed 20 different pesticides. Spinach samples had, on average, twice as much pesticide residue by weight than any other crop. And new to the list this year? Pears and potatoes. 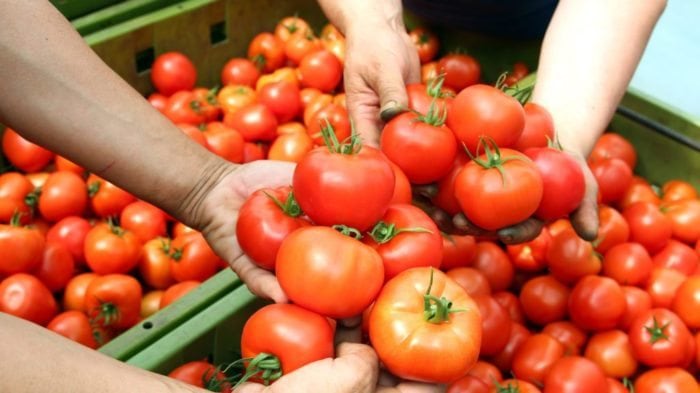 Fell free to pile on the guac and grab another ear of corn: Avocados and sweet corn were the cleanest of all, with only 1 percent of samples showing any detectable pesticides. As for the rest of the best, more than 80 percent of pineapples, papayas, asparagus, onions and cabbage had no pesticide residues. No single fruit sample from the Clean Fifteen tested positive for more than four types of pesticides—and only 5 percent of Clean Fifteen vegetable samples had two or more pesticides. Avoiding GMOs? A small amount of sweet corn, papaya, and summer squash sold in the United States is produced from genetically modified seeds. If this is a concern for you, buy organic varieties of these crops.

There are good reasons to buy organic other than simply avoiding pesticides on your plate, of course. While the research is mixed on whether organic fruits and vegetables contain more nutritional benefit than their conventionally grown counterparts, they are better for the environment and for the farmers who grow them. Organic farming uses less energy, results in more fertile soil, and is more profitable to farmers, the Washington Post found. So do it when you can, and when you can’t, stick to the cleanest contenders.

BIO: Sarah McColl was founding editor in chief of Yahoo Food. Her food writing has been featured in print and online for Bon Appétit, House Beautiful, Modern Farmer, Extra Crispy and others.