In a world where passing on the bread basket is the trend, sourdough stands out. More and more people are talking about it, baking it, and eating it. Not only does sourdough have a unique tangy taste, it’s unique in its relationship to our health. In comparison to the average loaf of grocery store bread, sourdough bread is actually full of good things your standard loaf might be missing. Here are five ways sourdough is healthier than conventional bread.

1. It’s one of the least processed breads you can eat.

Sourdough bread dates back to 1,500 BC in ancient Egypt. It was the only form of leavened bread that existed until just a few centuries ago when commercial yeast became available. That means we’ve been eating this leavened bread longer than any others. In fact, it’s such an old form of leavened bread and hasn’t changed much with modernization that it’s one of the least processed breads we can eat. This, in and of itself makes it a healthier choice: Studies have shown that processed foods are linked to a slew of negative health consequences, including an increased risk of cardiovascular disease and increased risk of mortality.

2. It’s a good source of prebiotics.

When sourdough bread dough is rising, the bacteria from the starter ferments the flour in the dough and pre-digests it. That means by the time the loaf is baked and you’ve cut yourself a slice, it’s easier to digest than conventional bread. In fact, if you have trouble digesting conventional bread or have a gluten sensitivity, you might not have a problem eating sourdough bread. This is also an important fact for those with gluten sensitivity.

Read more: How Sourdough Bread Changed the Way I Think About Carbs

4. It has more nutrients than conventional bread.

Once again, this is thanks to good bacteria and fermentation. When the bacteria in the sourdough starter breaks down the wheat, it also breaks down phytic acid. Naturally found in wheat, phytic acid actually blocks our bodies from absorbing many of its vitamins and minerals. But once it’s degraded, we’re able to absorb good things like potassium, magnesium, zinc, and folate from the bread.

Read more: Why You Should Eat Nutrient-Dense Foods + What That Really Means

5. It has a lower glycemic index than conventional bread.

Many conventional breads can cause blood sugar levels to spike quickly — leaving you with an energy crash soon after. However, because of the fermentation process used to make sourdough bread, many of the sugars and starches in the flour are broken down and eaten up by the natural yeasts so there is much less left in the baked bread than a conventional loaf. That means sourdough bread’s glycemic index — the number given to foods that measures how the carbohydrates in them affect blood glucose levels — is lower. So rather than having your blood sugar spike when you eat a slice of sourdough bread, it will remain much steadier, preventing an energy crash. 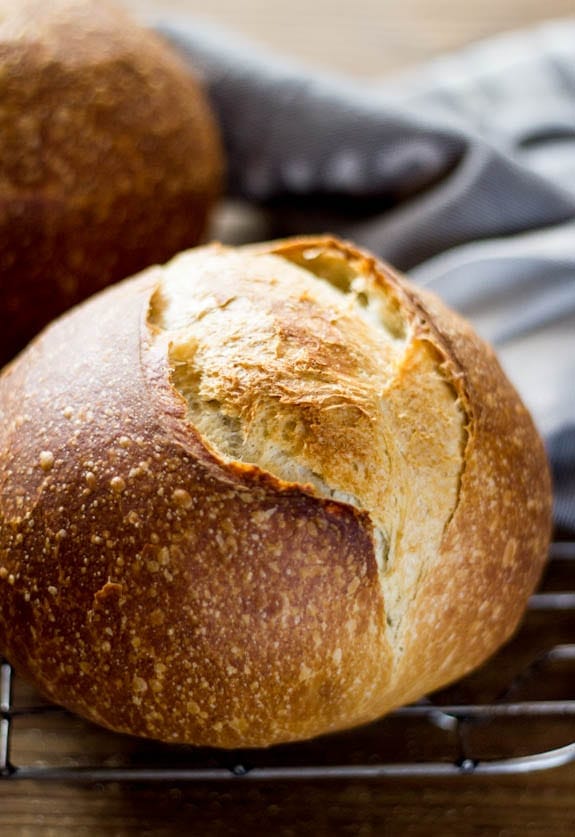 How to Buy Sourdough Bread

I would argue that the best way to buy sourdough bread is not to buy it at all, but to make it. Baking bread from scratch has a reputation for being incredibly difficult. I can tell you from experience, though, that’s it’s actually pretty easy — and more importantly, it’s enjoyable. There are tons of tutorials online (I like this one) and once you get the hang of it, you may never go back to store-bought.

But, if you are going to buy sourdough bread, know that not all sourdough bread is created equal. While it’s readily available at just about every grocery store and bakery these days, some packaged sourdough bread might not be made with a long fermentation and might have added commercial yeasts. This type of sourdough bread can still be delicious but it won’t have the full health benefits.

Instead, buy it at from-scratch bakeries and farmers markets. It might be a little more expensive but it’s worth it. And, for the most nutrients, opt for whole wheat sourdough bread.