I’m the daughter of first-generation Mexican parents and grew up in a predominantly Latin neighborhood of Los Angeles, so I definitely had my share of some of the best food my culture has to offer. But it was during my trips to Mexico that I got an even closer look at some native dishes and the history behind them. While meats are undoubtedly a part of many traditional Mexican meals, plant-based cuisine goes back centuries, inspiring many of the Mexican vegetarian recipes I’m sharing here.

Read next: I’ve Been on the Vegetarian Keto Diet for One Month — Here’s What I’ve Learned

Today, Mexico City is home to numerous vegetarian and vegan restaurants, serving dishes influenced by the city’s Aztec roots — many with a modern gastro touch. Ancient foods like maize, beans, and squash are as important to Mexican residents now as they were to ancient civilizations. So while the modern Mexican plant-based movement may feel new, I see it as simply a reinvention and love of thousands of years of Mexican food history. Tetelas are one of my favorite go-to snack foods. They originated in Oaxaca and Puebla — neighboring southern Mexican states — and at their most basic, require only a handful of ingredients. At first glance, they may look like a little triangular quesadilla. While similar, they’re actually made by rolling out corn masa into a circle and layering with a few spoonfuls of refried black beans and Oaxaca cheese before folding them closed into the traditional triangle shape and cooking them over a hot comal (a typically cast iron griddle) until browned. In this recipe, sautéed chiles and onions can be stuffed in with the beans and cheese — fresh salsas and creams on the side — for an extra serving of vegetables and a hit of spice! I know, a bowl of beans might sound boring, but once you’ve had these, you may change your mind. These aren’t just beans from a can — they lean more in the style of frijoles charros (think Mexican cowboy beans) and are cooked with onions, garlic, and a medley of spices and herbs. The beans alone are delicious as-is, but the con todo (with everything) part takes them to a whole new level. The addition of chopped, fresh onions and tomatoes, slices of ripe avocado, and cubes of Oaxaca cheese make this a whole meal. 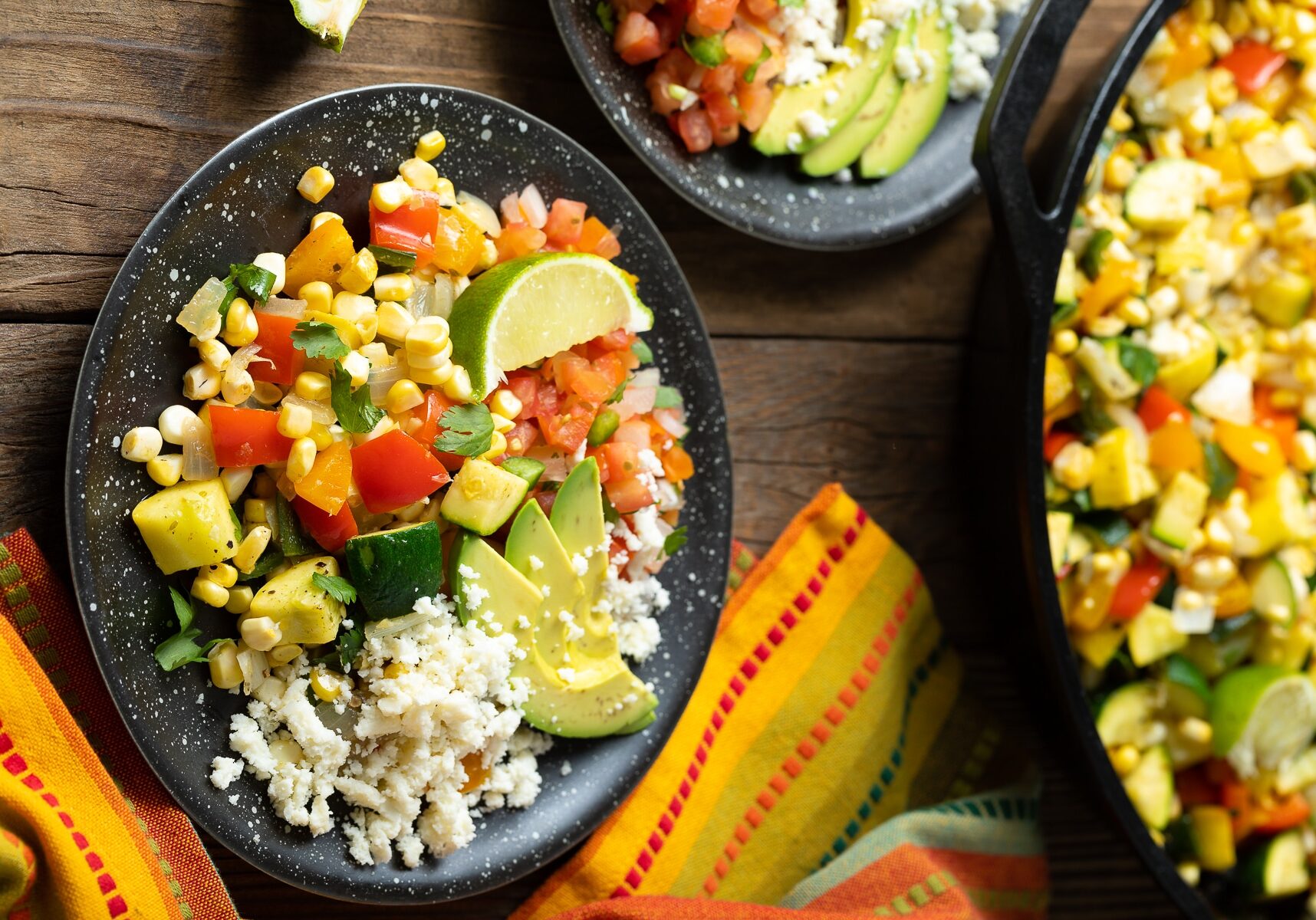 When it comes to native Mexican ingredients, you can’t get much older than squash and corn. Both are indigenous to Mexico and go back seven to 10,000 years. This recipe calls for both and is loaded with even more healthy vegetables. Because squash is the star of this dish, it was given the name calabacitas (little squash or little zucchini). The recipe for this traditional dish can vary depending on region, making it versatile and forgiving. I personally like cooking down the vegetables until they’ve released more juices, becoming more of a soup, and topping it with a little bit of mozzarella or jack cheese. 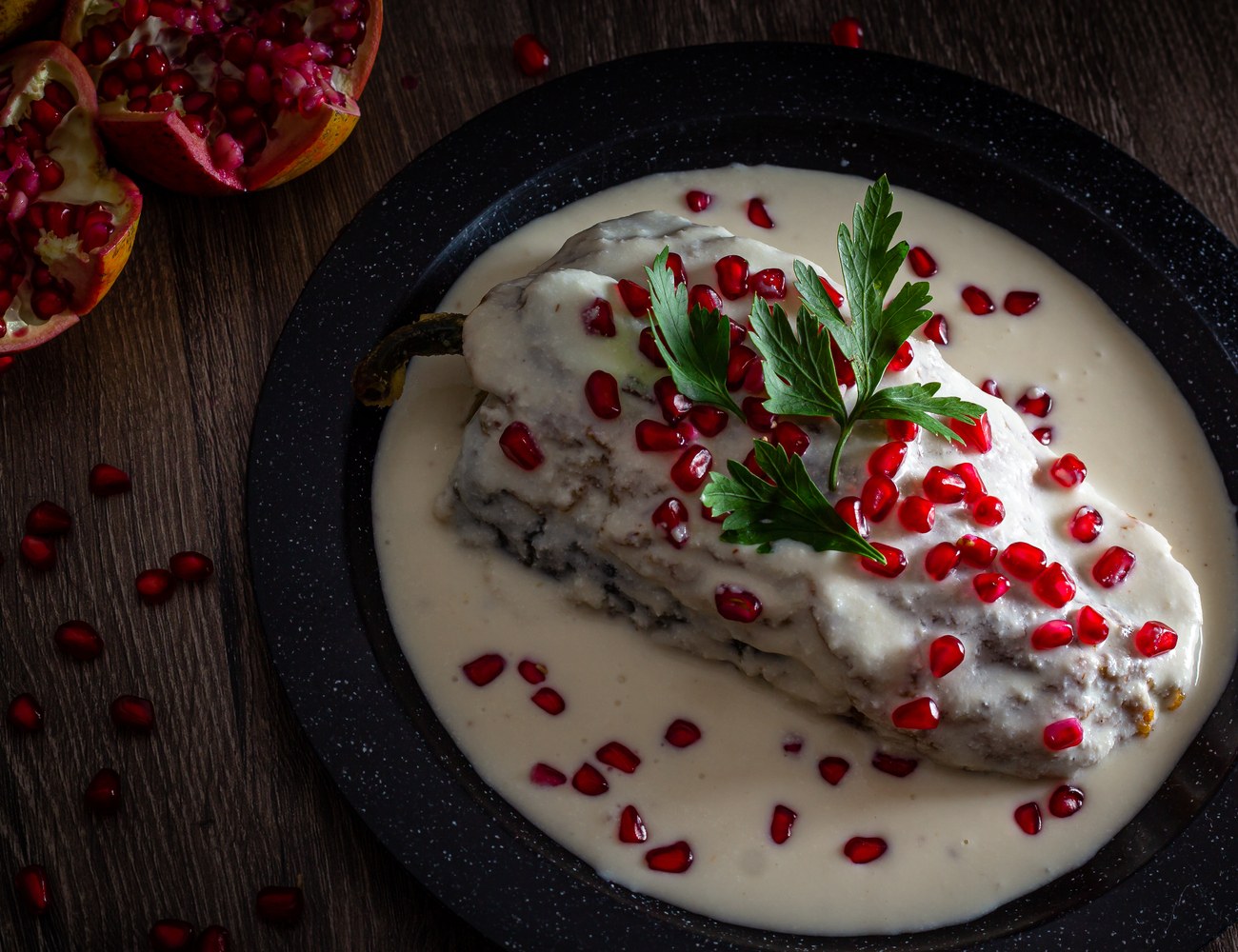 Chiles en Nogada, or chiles in walnut sauce, is a traditional dish that screams with Mexican pride — if you couldn’t already tell by its use of the colors of the Mexican flag. And I won’t lie, it can be quite laborious, but honestly, it’s oh-so-worth-it. Come to think of it, the level of intensity in preparation could be one reason why it’s typically reserved for Mexican independence day or other special occasions. In this variation, the “meat” in this picadillo (minced meat mixture) is made with lentils, but it’s still full of the warm spices and fresh and dried fruits found in the traditional recipe. The velvety walnut sauce and pomegranate seeds that top the dish tie all the flavors together and make it transcendent. 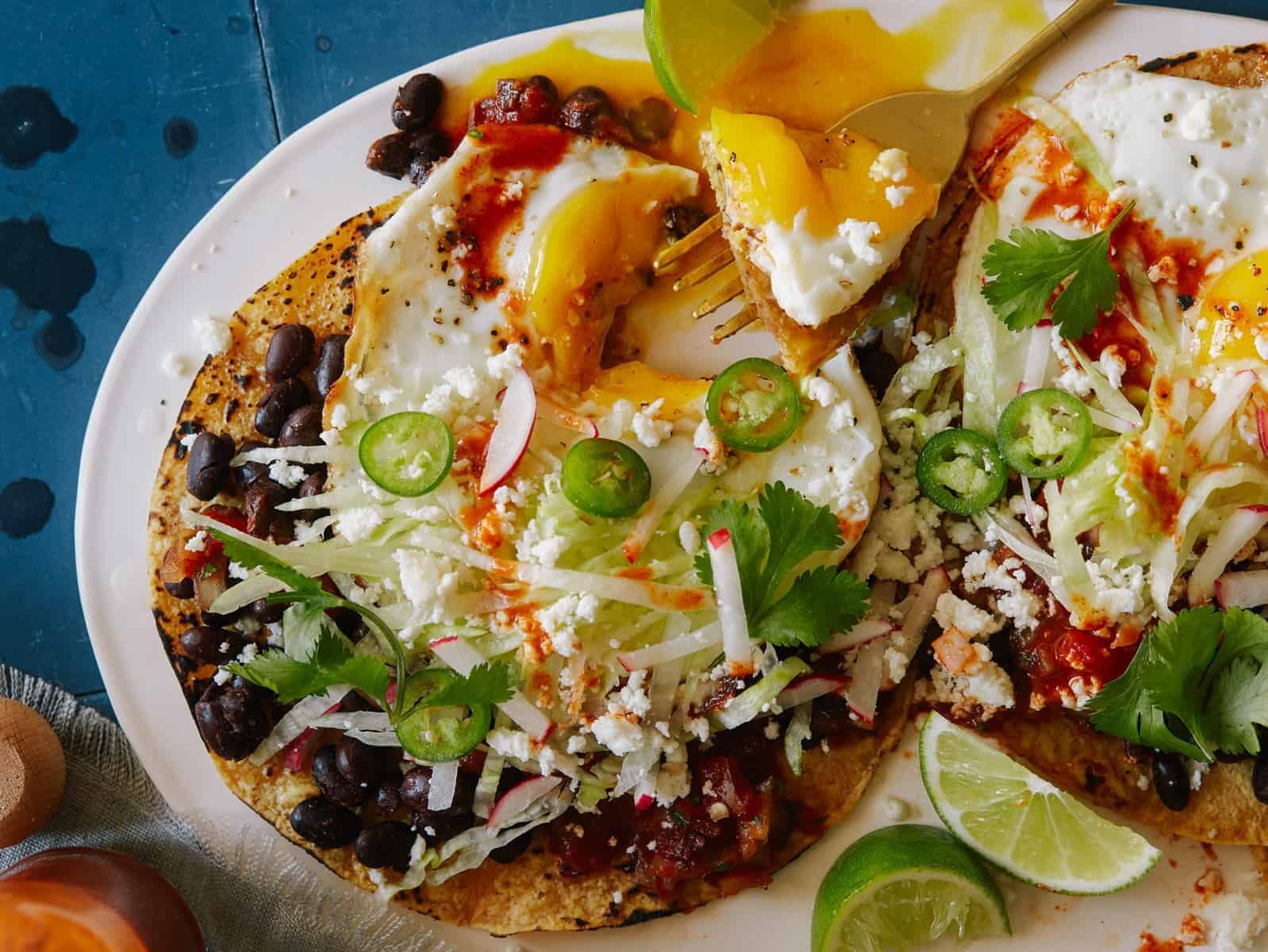 Starting my day off with something high in protein and low in carbs — but full of flavor — is usually a recipe for keeping me satisfied as I power through my morning. Mexican ranchers were probably searching for the same thing when they invented huevos rancheros (ranch eggs) that first became popular in the 1500s. My abuela made hers by placing a corn tortilla in a cast iron skillet with a couple tablespoons of vegetable oil, cracking an egg on top, and then spooning the hot oil over the egg until the whites were just done, the yolk runny, and the tortilla perfectly crisp — finishing it off with a big spoonful of homemade salsa and a sprinkling of mild, crumbly cotija cheese and fresh cilantro. This recipe does things a little differently, and it’s a better-for-you version, if I’m honest: it uses heart-healthy olive oil, and you assemble the ingredients over a warmed tortilla instead of frying it. Whether the beans are added on top, like in this recipe, or on the side like my abuela preferred, it’s sure to be a hit at your breakfast table. 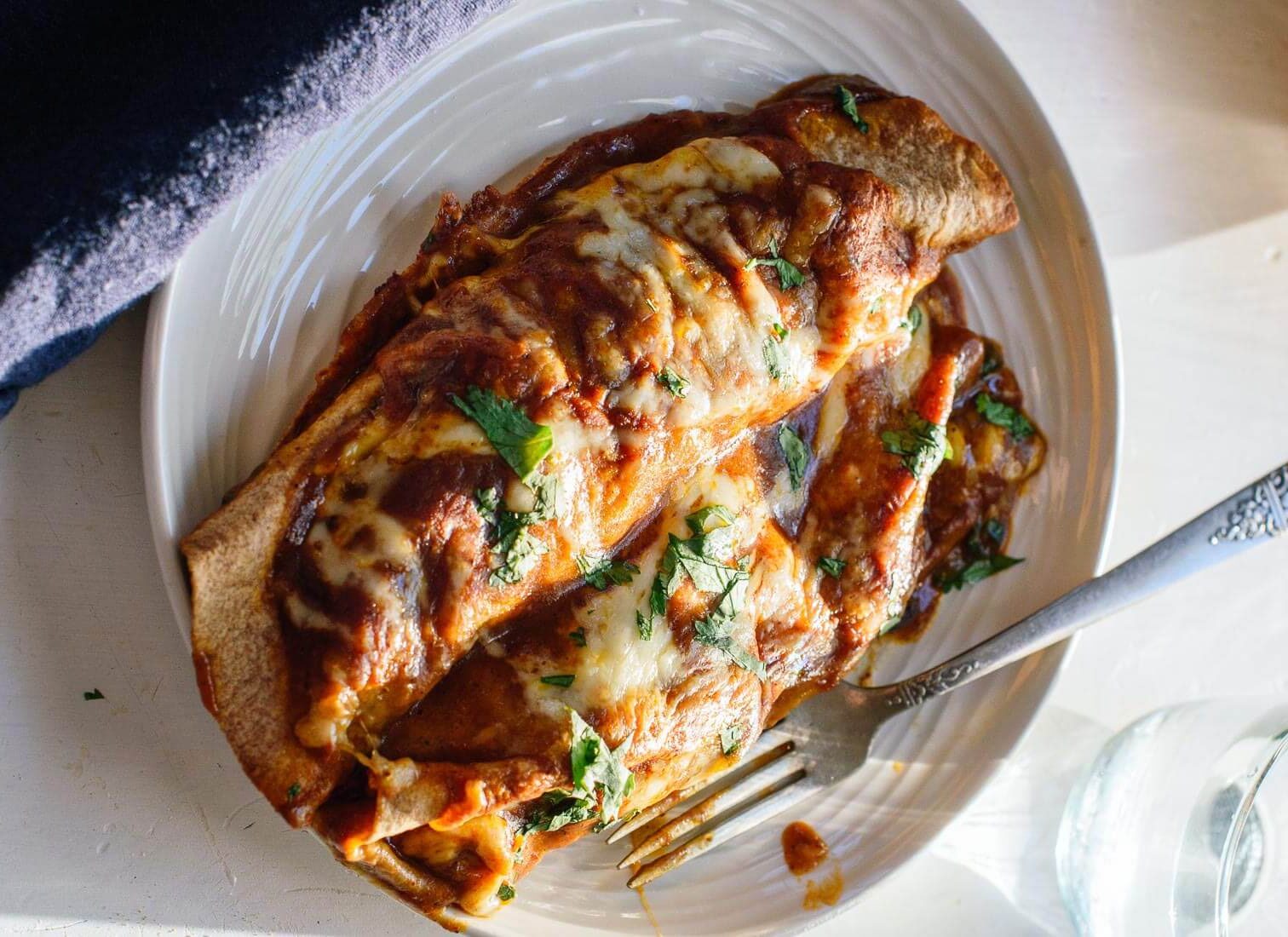 Go to just about any Mexican restaurant and you’re sure to find enchiladas on the menu. Although most versions contain meat of some sort, this is a dish that doesn’t actually require meat at all. Also, it might look difficult, but it’s really pretty easy — including the homemade sauce, which seems intimidating but is simpler than you might think. The tortillas are stuffed with a hearty mix of sautéed vegetables, beans, and cheese, and topped with a lightly spicy sauce and a generous amount of cheese.

My pro-tip for this traditional dish is to use warm corn tortillas instead of flour, and to make sure the sauce covers every corner (no dried out tortillas, please!). Instead of Monterey Jack added on top before baking, try garnishing with cotija cheese when the dish is right out of the oven. 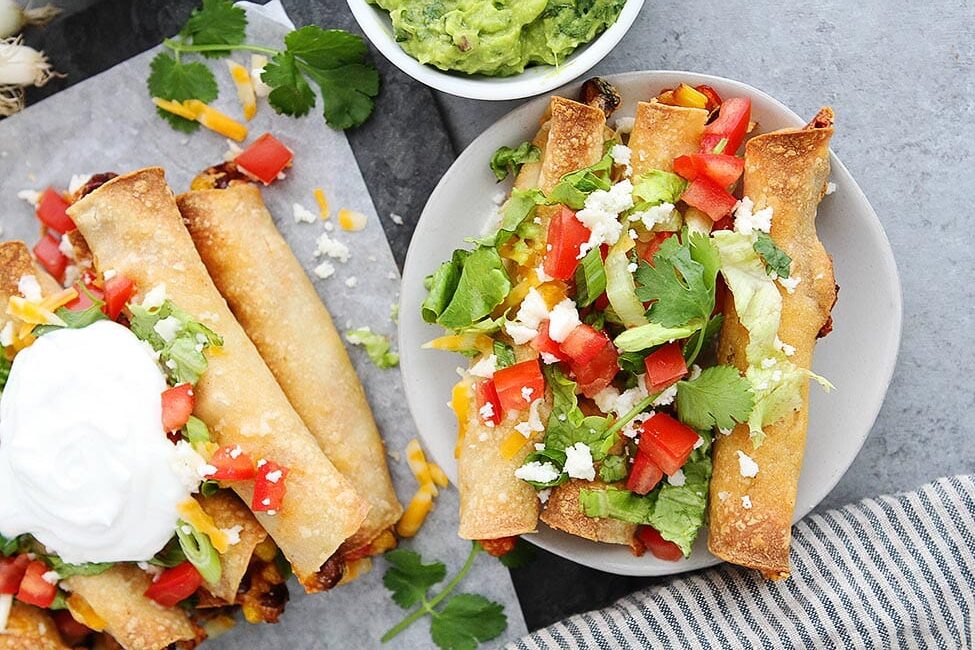 There’s some debate around the origin of taquitos. Some say they were invented in San Diego, California by a tortilla factory owner rather than in Mexico. I don’t think anyone can be totally sure, but what I do know is that tacos are a very typical street food in many parts of Mexico, and this crispy, rolled version is just as delicious and great for taking on-the-go or for a sit-down family meal. There’s certainly no doubt that they taste great filled with shredded beef and deep fried, but this version uses black beans and cheese, and opts to bake the taquitos for a healthier twist that still reminds me of my childhood in all the best ways. Just like I have a hard time ending any meal without a sweet element, the same goes for this: Popsicles, or paletas, are the perfect dessert for those hot summer days that are not far off, or as a treat when you’re already stuffed but that sweet tooth is calling. They come in a rainbow of colors and flavors, and the tangy mix of hibiscus and lime is one of my favorites. The dried hibiscus flowers are steeped to make a sort of tea, then cooled down and mixed with sugar, lime juice and zest, and a touch of sea salt before being poured into molds and frozen. The mixture is as just as refreshing when served as a cool drink; just leave out the salt and pour over ice — or rim your glass with the salt and add a splash of tequila!

Read next: These Quick & Easy Breakfasts Are Loaded with Fruits & Vegetables