A Physician & Busy Mom On How She Never Misses A Workout

Gretchen Lidicker is a writer, researcher, and the author of the books CBD Oil Everyday Secrets and Magnesium Everyday Secrets. She has a degree in biology and a masters in physiology with a concentration in complementary and integrative medicine. She's been featured in the New York Times, Marie Claire, Forbes, and Travel & Leisure.
|
October 24, 2019

Dr. Bindiya Gandhi has a schedule that would make any person’s head spin. She’s a physician, medical director, and busy mom of one (soon to be two!). And yet somehow, she still manages to get her workouts in.

Dr. Gandhi’s Instagram feed is scattered with photos and videos of her sweating it out at home—oftentimes with her daughter, Soraya—tinkering around the room playing or even joining in on the workout session. “On the weekends I’ll have a little bit more flexibility and can sneak into a studio yoga class. But on weekdays after or before work, it’s usually just working out at home,” she explained.

According to Dr. Gandhi, an integrative medicine physician and the medical director of Revive Atlanta MD, yoga is what helped her get through labor. She worked out about 4 days a week through her whole first pregnancy and plans to do the same with her second, which she’s already more than halfway through. She does mostly yoga, which she’s been practicing for about 16 years.

But how does she manage to stay motivated? 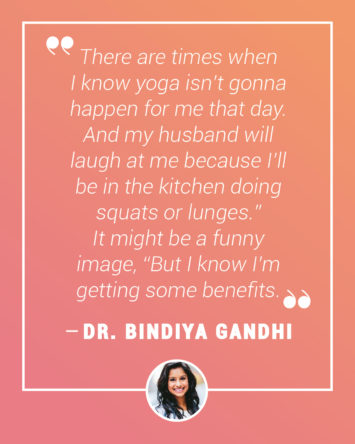 Her at-home practice is made easier by the fact that she did a yoga teacher training and became a certified teacher in 2011. “I don’t have time to teach, but it pushed my at-home yoga practice to another level because I don’t have to rely on going to a studio for a great session,” she says. We have to admit we think this is pretty genius; and it definitely puts an interesting spin on the saying “If you can’t do, teach.”

But being an active person — who also want to have kids and a career — isn’t easy, either. There are definitely some expectations to adjust. “It has been hard,” she said. Sometimes, especially when you have an infant, you’re having to choose between a workout or sleep. “And sometimes you’re like, I’d rather sleep,” she says. But then you just adjust your workout and move on. Dr. Gandhi’s overall philosophy is that it’s better to do some movement than none at all.

“There are times when I know yoga isn’t gonna happen for me that day. And my husband will laugh at me because I’ll be in the kitchen doing squats or lunges.” It might be a funny image, “But I know I’m getting some benefits,’ she says.

How To Do it: If you’re struggling to make it to the gym, re-think your routine and perfect the 30-minute at-home workout instead. You’ll still get many of the same benefits!

9 Recipes That Use Greek Yogurt to Make Delicious, Protein-Rich Meals

For Years, I Had Heart Palpitations. This Diet Change Finally Helped Me Get Them Under Control

I Reversed My Pre-Diabetes Diagnosis in Three Months: Here’s How

6 Expert-Approved Tricks for Handling Your Stress

9 Foods To Eat Every Day for a Longer Life

The Unhealthiest Foods for Your Heart, Says Dietitian

The 7 Best Foods for a Better Night’s Sleep, Say Dietitians