How To Feel Low-So Good

When Jessica Goldman Foung was attending Stanford University, lupus attacked her kidneys and brain. The great news is that she recovered and flourished. The bad news is that her kidneys were in such dire straits, she was told she needed a kidney transplant and dialysis for the rest of her life. But instead of being defined and defeated by this illness she adopted a very strict low-sodium diet of 1 teaspoon of salt a day (1,000 mg of sodium), started the now popular Sodium Girl blog, and changed not just her life, but the lives of others.

In her new book, Low-So Good: A Guide to Real Food, Big Flavor, and Less Sodium (Chronicle Books, 2016) Jessica provides tips, wisdom, and recipes for the 90 percent of us who consume too much sodium. Clean Plates spoke to Jessica about the perils of excess sodium, where it’s hidden, and good substitutes. As a bonus, she gave us a low-sodium recipe for decadent Dukka-Spiced Salmon Patties. 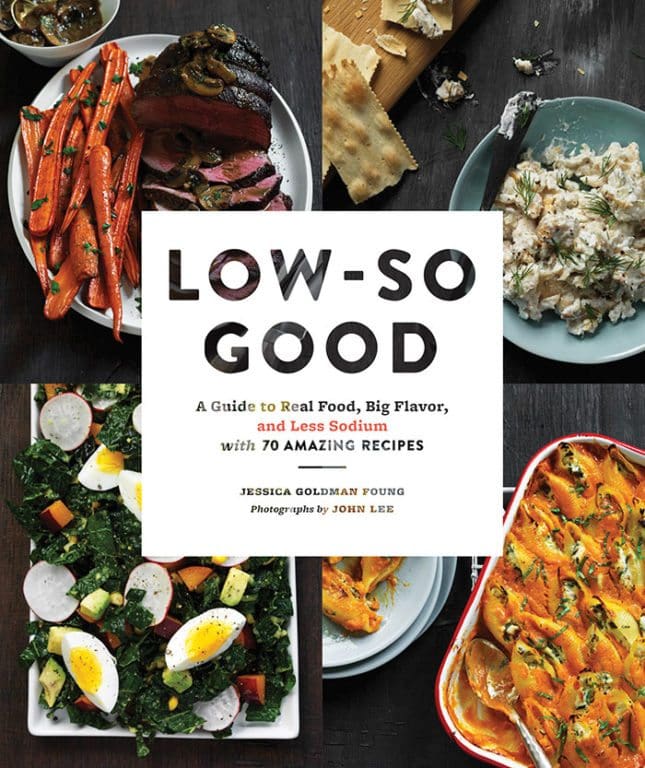 Clean Plates: What does excessive sodium do to your body besides the inherent danger of high blood pressure?

Jessica Goldman Foung: Sodium is an essential electrolyte that plays a big role in everyday functions, like balancing fluids and transporting nutrients. However, depending on health needs and sodium sensitivities, too much sodium may have an adverse affect on the body (such as retaining excess fluid and resulting hypertension). It can also increase the risk of developing other conditions, like stroke, heart failure and kidney disease.

As most Americans eat more than the recommended sodium intake, spend a week tracking your sodium habits. There are a lot of great mobile apps available to help you calculate, like MyFitnessPal and MyPlate. But be sure to talk with medical professionals as well to find out your limits and what’s right for your body.

C.P.: Is there less sodium in sea or kosher salt than iodine salt?

J.G.F.: Sea salt is often thought to be the “healthier” salt, as some believe it contains more nutrients and a more natural taste than table salt. But even with this distinction and its bigger flakes, it is very important to note that sea salt, kosher and table salt ALL contain the same amount of sodium. No matter which kind you use—Kosher, Himalayan, or what’s on the table—one teaspoon of each will still equal about 2,300 mg of sodium.

C.P.: How does your 7-day reboot work? Why is it important to reboot your palate?

J.G.F.: A successful “low-so” diet not only requires one to adjust the tastebuds from its salty expectations, but also adjust his or her routine (i.e. shift from processed foods to fresh food cooked at home). And while both changes require time and get easier and tastier with time, there’s nothing like diving in head first to get started.

That’s the objective of the Reboot: It not only introduces readers to flavorful recipes and creative ingredient swaps to help avoid high-sodium food traps, but also cooking tips (like Sunday meal prep), cooking techniques (like ricing cauliflower), and leftover makeovers (frittata “croutons”) that both re-perk up the palate and create confident cooks.

J.G.F.: Some sneaky sodium contributors that show up in many recipes include milk, bread, and broth! But easy and creative swaps exist that will keep these items out of the kitchen and favorite dishes on the table. Most milks, including nut, soy and hemp milks, contain around 100 mg per 1 cup depending on the product. So, in place of cow or almond, look to coconut, which can contain less than 15 mg per serving.

When it comes to bread, don’t say goodbye to sandwiches. Use sturdy butter lettuce or collard greens like a wrap; hollow out an English cucumber half to look like a “baguette” and fill with hummus and shredded veggies; make a nori roll with 0 mg sodium seaweed; thinly slice jicama into rounds for a crunchy bite; or bake a frittata in a sheet pan and then cut into squares to make a “frittata foccacia.”

Finally, broth: Even the low-sodium broths can quickly creep up on the sodium scale. So instead of using something from a can or even making the DIY kind, simply let your ingredients provide the flavor. Orange or lemon juice, a splash of wine, umami-filled tomatoes, and even a little jam will lend unexpected zing to your soups, stews and curries. Other fun, low-so ingredient swaps include: pickled grapes for olives; chopped broccoli and salt-free nuts for breadcrumbs; macaroons and hash browns for quick pie crusts, sweet and savory; and grilled yellow squash halves for hot dogs or “squash dogs.”

C.P.: What are some fall-back dishes to choose in restaurants?

J.G.F.: When dining out it’s always best to call the kitchen in advance so they can prepare ingredients and a special meal just for you. However, when dining-on-the-fly, look to vegetable-heavy salads (with no dressing), fresh vegetable sides (not blanched in salted water), and fresh protein (like, unseasoned or not-breaded fish and steaks). Most importantly, though, when options feel limited, think of the menu as a key to what’s available in the kitchen. Customize that leafy salad with other ingredients (like citrus, avocado, red chili flakes) or textural additions (like a runny fried egg or salt-free nuts). Be creative and eat well!

C.P.: Is there a salt substitute that you like?

J.G.F.: You cannot just take the salt out of the foods you love—the result would definitely be boring. That’s why one must replace it! And the funny thing is, salt is just one spice on the rack and a whole world of flavor awaits those on this diet! Right now, I’m a sucker for dried dill weed, cumin, salt-free garlic powder and chili pepper. But here’s what I tell everyone: For one week take away the salt from the table and replace it with something else to sprinkle. That could be another spice or spice blend. It could be fresh, chopped herbs, or crushed nuts. A simple switch like this can completely change a dish as well, in a good way.

For the Salmon Patties

Zest of 1 lemon, plus 1/2 lemon for squeezing

Carrot–Sweet Onion Dressing (see below) or Greek yogurt for serving

For the Dukka Spice Mix:

For the Carrot-Sweet Onion Dressing:

Place the salmon fillets skin-side down in the prepared baking pan. Bake until the fish turns light pink, 10 to 12 minutes. Transfer to a plate. Once cool enough to handle, peel off and discard the salmon skin. Put a fresh piece of parchment in the baking pan.

Using two forks, flake the cooked salmon into small pieces and transfer to a large mixing bowl. Add the dukka, green onions, white onion, cilantro, lemon zest, egg, and chickpea flour. Stir to combine. Make small salmon patties, 2 1/ 2 in [6 cm] wide, using about 1/ 2 cup [90 g] of the mixture per patty. Place the patties in the prepared baking pan. Cover with aluminum foil or plastic wrap and refrigerate for 30 minutes, or overnight, to help the patties firm up for successful frying.

When ready to cook, line a large plate with paper towels. In a large skillet, heat 2 to 3 Tbsp vegetable oil over medium-high heat until the oil begins to ripple. Carefully put two patties into the skillet and cook until golden brown, 3 to 4 minutes. Flip the patties and cook for another 2 to 3 minutes. Transfer the patties to the prepared plate. Discard any browned bits from the skillet and repeat with the remaining patties, adding more oil and adjusting the heat as needed. Serve warm with a squeeze of lemon juice and a drizzle of dressing.

For the Dukka Spice Mix: Heat a medium skillet or sauté pan over medium-high heat. Add the pepitas and toast, stirring frequently, until they turn golden and begin to pop, 3 to 5 minutes. Transfer the pepitas to a small mixing bowl. Add the sesame seeds, coriander seeds, and cumin seeds to the skillet and toast until they become fragrant, about 2 minutes.

Transfer the toasted nuts and seeds to a food processor (or spice grinder). Add the garlic powder and pepper and pulse until the mixture forms a crumbly powder. Store in an airtight container for up to 1 month.

For the Carrot-Sweet Onion Dressing: Fill a small pot with 2 in (5 cm) water and place a metal steamer basket in the pot, above the water. Bring the water to a simmer over high heat and place the carrot pieces in the steamer basket. Cover and steam over medium-low heat until the carrots are tender, about 20 minutes.

Transfer the carrot to a small food processor (or blender). Add the onion, grapeseed oil, vinegar, lemon juice, garlic powder, and 1 Tbsp water and blend. (The dressing will be slightly chunky, so if you want it smoother, add a bit more water or lemon juice.)

Store in an airtight container in the refrigerator for up to 1 week.

Variation: Want to make a faster version of this recipe for dinner? Simply coat even-size salmon fillets with 1 tsp vegetable oil each. Rub the dukka on top and cook the fillets as directed. Remove the skin and serve whole with lemon wedges or the dressing.