In the past year, jackfruit has gone from relative unknown to veritable “it” food. Chefs, home cooks and bloggers in search of a soy- and grain-free plant-based meat substitute have embraced jackfruit, in part because it’s a whole ingredient, rather than a processed food product. Intrigued? Read on.

Thankfully, it wasn’t jackfruit that hit Sir Isaac Newton in the head, teaching us the law of gravity. Spiky, chartreuse-rinded jackfruit, native to South and Southeast Asia, is the world’s largest tree fruit, sometimes weighing in at a whopping 100 pounds. It’s big in versatility, too—the fruit can be dried, roasted, or grilled in sweet and savory dishes, while the seeds can be boiled, roasted, or ground into flour. Plus, the tree’s rot-resistant timber is used to build furniture and musical instruments.

Perhaps the oddest thing about jackfruit is that it’s used traditionally in India as a substitute for…meat. It’s added to stir-fries, curries, and a popular rice dish called kathal ki biryani. In fact, the Bengal word for the fruit translates as “tree mutton,” Eater reports.

“It’s been super popular,” Kate Grimes, co-owner of San Diego’s Del Sur Mexican Cantina, tells Clean Plates. The restaurant recently began serving jackfruit tacos, enchiladas, and burritos in adobo, mole, and a spicy mango sauce. It has a fairly neutral taste and absorbs other flavors well, so it works in a variety of dishes.

“It turns out almost like a pulled pork consistency,” she explains. “For a lot of people who used to be meat eaters, it’s nice to have that texture.”

It’s also a sustainable choice. In a warming world, where staple crops like maize and wheat struggle in unpredictable climates plagued by drought and heat, jackfruit flourishes.

“It’s a miracle,” Shyamala Reddy, a biotechnology researcher at the University of Agriculture Sciences in Bangalore, India, told The Guardian. “It can provide so many nutrients and calories – everything. If you just eat 10 or 12 bulbs of this fruit, you don’t need food for another half a day.” One cup of sliced raw jackfruit contains 155 calories 3 grams of fiber, and it’s a good source of vitamin C, magnesium and potassium.

Thanks to its surge in popularity, you can find jackfruit, canned and fresh, in grocery stores across the country, like Whole Foods and Wegman’s. Use the canned, ripe fruit in sweet dishes or atop sticky rice. If you can’t find it at the supermarket, try an independent Asian market, where it is often sold cut-up into more manageable pieces, rather than a whole one.

HOW TO COOK IT

It tastes “like chicken,” is a good rule of thumb from Kate Grimes of Del Sur Mexican Cantina. At home, she will use the same marinade for her husband’s chicken as she does on jackfruit for herself, then grill or bake it before adding to salads. Like tofu, its texture soaks up flavors, and it can be shredded to make a sloppy joe-style “burger.” “It’s so easy to cook—it soaks up the flavor,” Grimes says.

Or sample one of the new heat-and-eat lines of jackfruit meals currently on the market from The Jackfruit Company and Upton’s Naturals in flavors like South Indian curry, barbecue, and chili-lime carnitas. 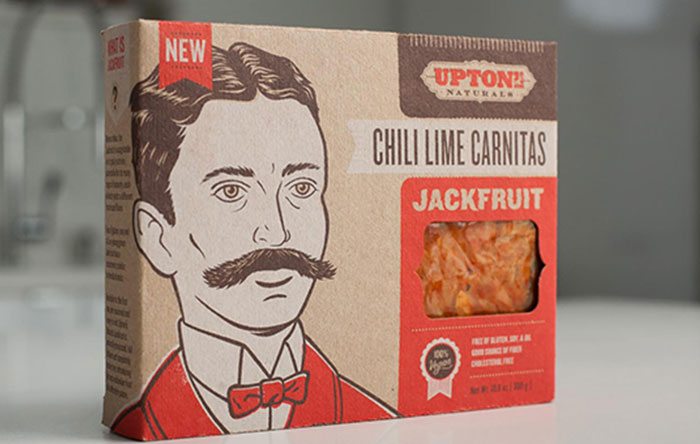