Can This Green Give You Super Powers?

Shishito peppers have been showing up on restaurant menus for a while now, served blistered and generously sea-salted for a tongue-tingling snack or appetizer. These glossy-green Japanese peppers are flooding fall farmer’s markets, awaiting home cooks who aren’t afraid to turn up the heat…ever-so-slightly.

On the Scoville scale, which rates a pepper’s spiciness based on its capsaicin concentration, the peppy shishito pepper falls well below the jalapeños’ assertive punch, but above the bell pepper’s mellowness, which helps explain their popularity. If you like a pepper to taste like more than just heat, the shishito is a flavorful choice. Be forewarned: About one in ten shishito peppers will have an extra spice kick thanks to a higher concentration of capsaicin.

And these little peppers pack more than just flavor: One serving of shishitos (about 8 peppers) provides 170% of your recommended daily Vitamin C and 80% of your daily Vitamin A, as well as loads of vitamins K and B6. Peppers, in general, are a superfood; they act as an anti-inflammatory agent and can lower LDL (the bad cholesterol) while helping keep blood sugar levels in check. Plus, capsaicin speeds up metabolism—so pile on the super low-calorie shishitos with abandon. 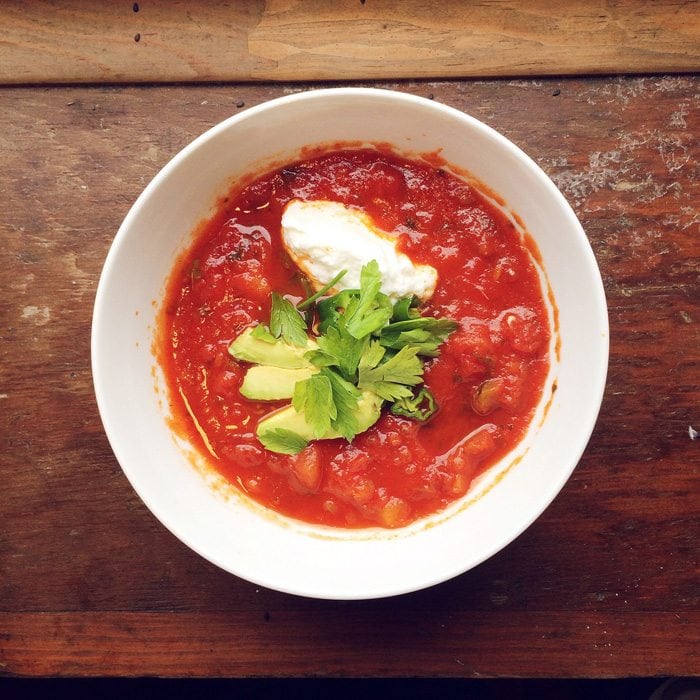 Shishito peppers can be used as an easy substitute for French fries or popcorn, or to bolster dishes like this fresh Shishito Gazpacho recipe (below). Try roasting a batch for topping tacos, pickling them as you would jalapeños, or in an easy salsa over morning eggs. They’re also delicious on crostini with a slick of ricotta and honey. But the most popular preparation for shishitos may be how they appear at restaurants: Grilled with some olive oil and sea salt, and eaten hot.

When choosing shishitos look for ones with firm, smooth, unblemished skins, and stems that are sturdy. If you’re not going to eat them right away, store them unwrapped in the refrigerator for up to two weeks.

Bring a large pot of water to a boil. With a paring knife, score the bottom of the tomatoes with an X. Drop the tomatoes and shishito peppers into the boiling water. Remove tomatoes after 15 seconds. Remove the shishitos after 3 minutes. Transfer both to an ice bath and let cool for about 1 minute. Remove and pat dry.

Stem and coarsely chop the shishitos and place in a large bowl. Peel, core and seed the tomatoes and add to the shishitos. Add 1/2 cup tomato juice to the mixture. Add the cucumber, bell pepper, red onion, jalapeno, garlic clove, olive oil, lime juice, balsamic vinegar, Worcestershire, cumin, salt and pepper and stir to combine. Pour 1 1/2 cups of the mixture into a blender and puree at high speed for 15 seconds. Return the pureed mixture to the bowl and stir to combine. Cover and chill for at least 2 hours, up to overnight.

Serve the gazpacho with avocado, sour cream and cilantro.