The Best Sugar Substitutes for Baking, According to a Pro Baker 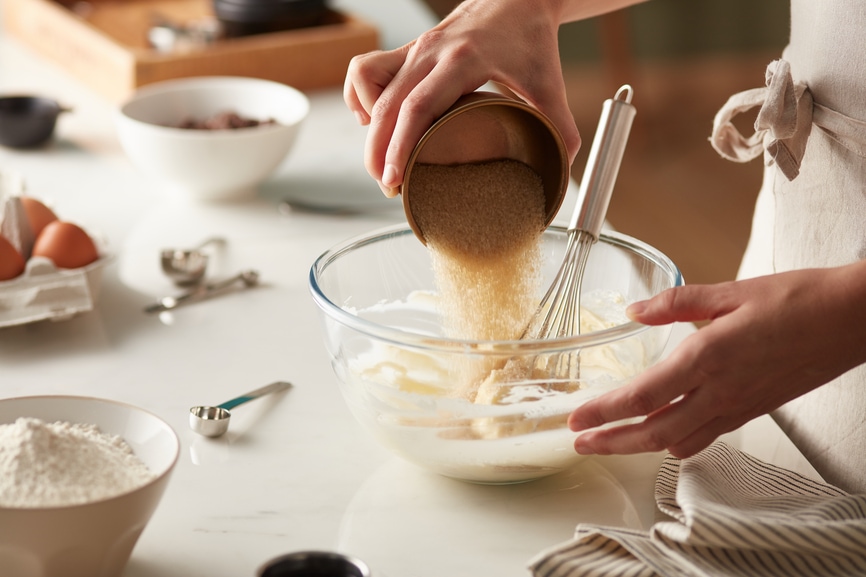 White granulated sugar has long been the go-to sweetener for baking. That’s because sugar does a lot more than add sweetness to your favorite baked goods. It keeps your cookies soft, it stabilizes your meringues, and adds height to your cakes. There is, as they say, a science to baking — which can make finding sugar substitutes for baking a bit tricky.

Luckily, there are loads of bakers out there who have been experimenting with alternatives, from maple syrup to monk fruit. We asked Sadie Radinsky, blogger, baker, and author of Whole Girl, to share her favorite sugar substitutes for baking. Here’s what she had to say:

Coconut sugar has been one of Sadie’s favorite sweeteners since she first started making Paleo, gluten-free treats. “It has a delicious, complex flavor, and is a great Paleo alternative to regular cane sugar,” she says.

So, what makes it healthier? Coconut sugar is less processed than granulated white sugar and has trace minerals, like iron, zinc, calcium and potassium. It also has a slightly lower glycemic index than white sugar, which means it will cause slightly less of a spike and crash.

Another pro: It’s relatively straightforward to substitute in for regular sugar — but, Sadie adds, “I never use it 1:1 because I make all low-sugar recipes.” A good rule of thumb? You can reduce the white sugar in a recipe by about a third without seeing any negative results.

Monk fruit, like stevia, is a no-sugar sweetener, which means you can make your baked goods entirely sugar-free. Sadie likes Lakanto, which makes a number of different monk fruit sweeteners, including Classic and Golden, both of which also include erythritol, as well as a liquid monk fruit extract, which is made entirely from monk fruit and water.

“Unlike most sugar alternatives, this monk fruit sweetener has very little aftertaste,” Sadie says. “Think of this as similar to stevia extract (but without the aftertaste!).”

She uses the granulated sweeteners for baked goods and the liquid extract to sweeten beverages and no-bake desserts. One drawback? “Although Lakanto tastes very similar to regular sugar, it doesn’t caramelize the same way. So in some recipes, I like to use half Lakanto and half coconut sugar for a treat that’s lower in sugar but still has a caramel-y texture.”

Maple syrup is a delicious unrefined liquid sweetener that, like coconut sugar, contains trace nutrients and has a lower glycemic index than white sugar. Sadie uses pure maple syrup (or Lakanto Maple-Flavored Monk Fruit Syrup) in a lot of her recipes (like these tahini blondies!) to keep them moist.

It has a similar sweetness to regular sugar, but, if you’re swapping it for granulated sugar, you’ll want to decrease the total liquid in the recipe by about 1 tablespoon for every 1/4 cup of maple syrup.