Serena Wolf on Mastering the Art of a Quick & Simple Bath

Gretchen Lidicker is a writer, researcher, and the author of the books CBD Oil Everyday Secrets and Magnesium Everyday Secrets. She has a degree in biology and a masters in physiology with a concentration in complementary and integrative medicine. She's been featured in the New York Times, Marie Claire, Forbes, and Travel & Leisure.
|
October 17, 2019

“I’m very much a tequila person, which people find funny because they assume you’ll have a glass of wine. But I say have whatever you want!” says Serena Wolf, cookbook author and the woman behind the food and healthy lifestyle blog, Domesticate Me.

She’s not talking about any old beverage, but rather, the type of drink you bring into the bathtub, which just so happens to be her favorite place in the world.

The Ordinary Magic of a Quick and Simple Bath

But why baths? Out of all the self-care practices they can, admittedly, feel overly time-consuming and even plain inconvenient. But for Wolf, that’s the point. She sees baths as her most powerful tool against a world that values being busy far too much.

“I’m someone who strives to be less busy,” she says, despite being in the “hustle’ phase of her career, as she calls it. She manages to squeeze baths into her schedule on the regular by planning ahead, explaining that her bath ritual actually starts the moment she decides to take a bath (usually hours before the fact). Once she decides, she plans her day around it: “I’ll even make something that takes exactly half an hour in the oven and use that half hour to soak.”

Wolf has been very open about her struggles with anxiety and admits that her bath obsession is also a way to keep her nervous system in check. “I know that a bath has calmed me down in the past, so it’ll probably calm me down now. It’s something I always rely on to make me feel better,” she explains.

Despite being fully committed to them, you could also call her a bath minimalist. “I add Dead sea salts and occasionally some sort of coconut oil or coconut oil powder,” she says. The soaking can last anywhere from 10 minutes to the point where “my husband is knocking on the door to make sure I’m okay,” she jokes.

She often brings a cocktail with her — hence the aforementioned tequila conversation — which she puts in a stainless steel tumbler so it stays cold despite the steam. Brilliant. 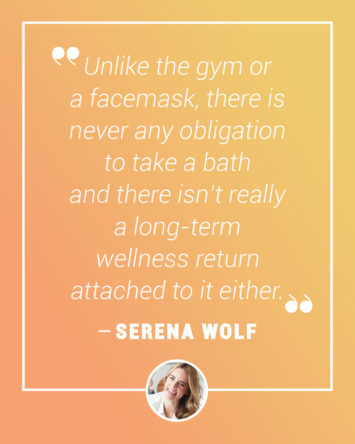 As she tries to unpack what, exactly, it is about baths that’s so appealing to her, all of a sudden she says, “I just realized what it is!” and explained: “[Unlike the gym or a facemask], there is never any obligation to take a bath and there isn’t really a long-term wellness return attached to it either.” All you really get from a bath is the time you spend in the bath, and that’s why they feel so darn luxurious.

“I was somebody who grew up taking baths. And then you transition to a shower because it’s more efficient and more grown-up.” But Wolf bucks this idea. “I was never really down with the shower,” she says.

How To Do it: A good self-care practice is one that makes YOU feel good, so don’t overthink it. Keep your bath ritual easy by adding a simple bath salt. When you’re looking to take it up a notch, treat yourself to a cocktail while you soak.