10 Veggie-Packed Soups That Are Perfect for Summer

Chances are that when you think about “summer” food, you think of barbecue, salads, and frozen treats. But soup? I bet you don’t immediately think of soup. Here’s the thing, though: If you’re relegating soup to colder months, you’re seriously missing out. Hot or cold, it’s the perfect base for all sorts of produce: corn, zucchini, herbs, greens, tomatoes, I could go on… Here, we’ve rounded up 10 of our must-make summer soups.

The base of this chilled vegan soup is cucumbers, avocado, and a little lime. It’s incredibly simple to make — you basically just blend everything together — and then you can get creative with the toppings, like tomatoes, corn, cilantro, and hemp seeds. 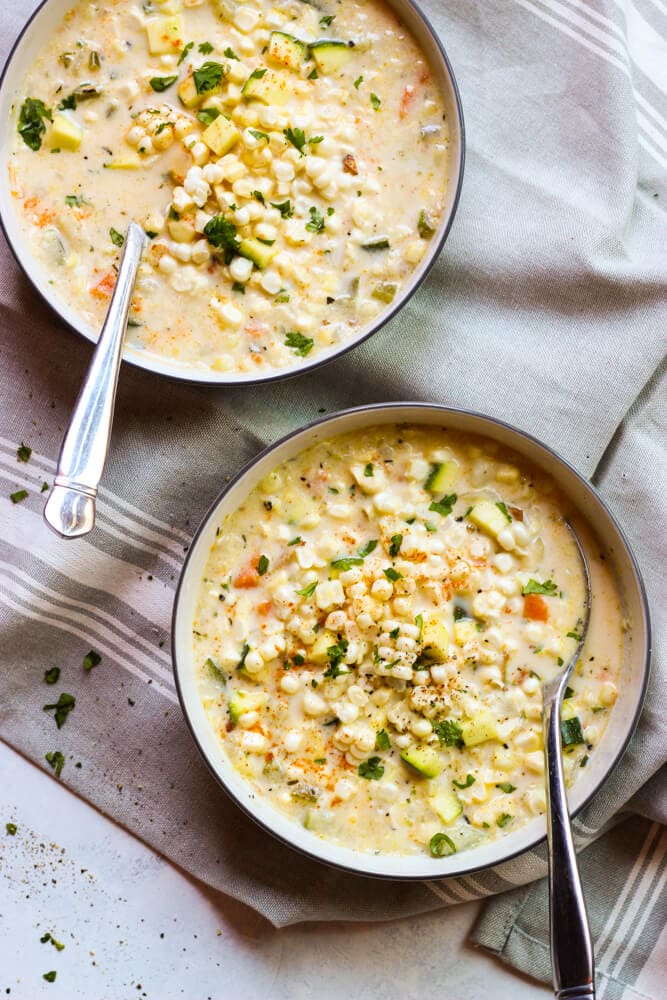 This riff on traditional corn chowder doubles down on vegetables: In addition to corn, the soup is filled with zucchini, carrots, potatoes, onion, and celery. It also swaps heavy cream for half-and-half; if you want to make it dairy-free, you could substitute canned coconut milk. 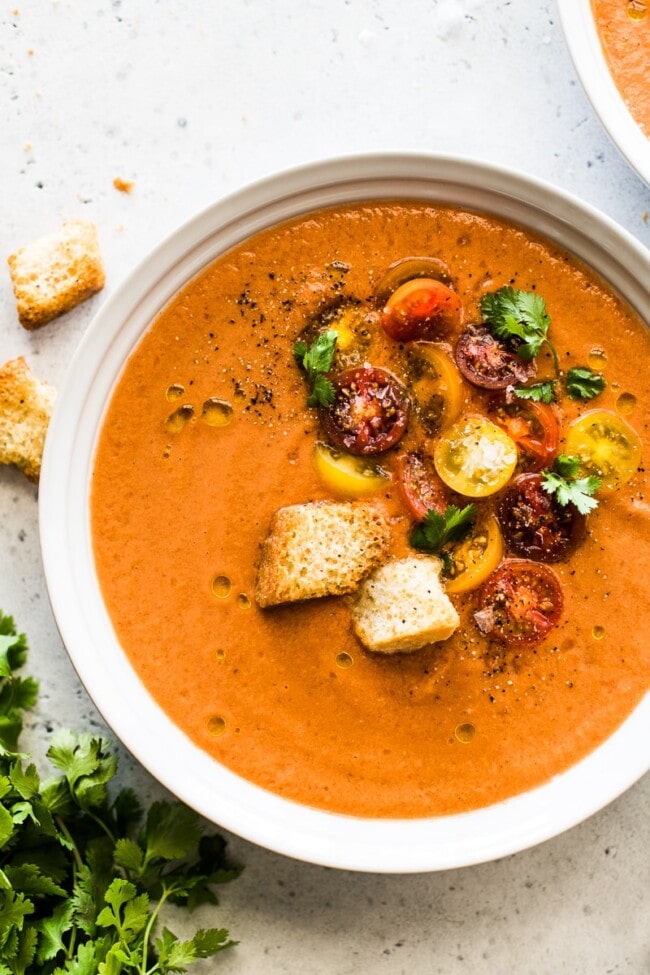 Traditional gazpacho is the ultimate summer soup. Made with just a few simple ingredients — like sun-ripened tomatoes, cucumbers, bell peppers, and onions — this chilled soup is light and refreshing. Pro tip: It’s best to let gazpacho sit in the fridge for at least a few hours before eating, preferably overnight, so that the flavors meld together. 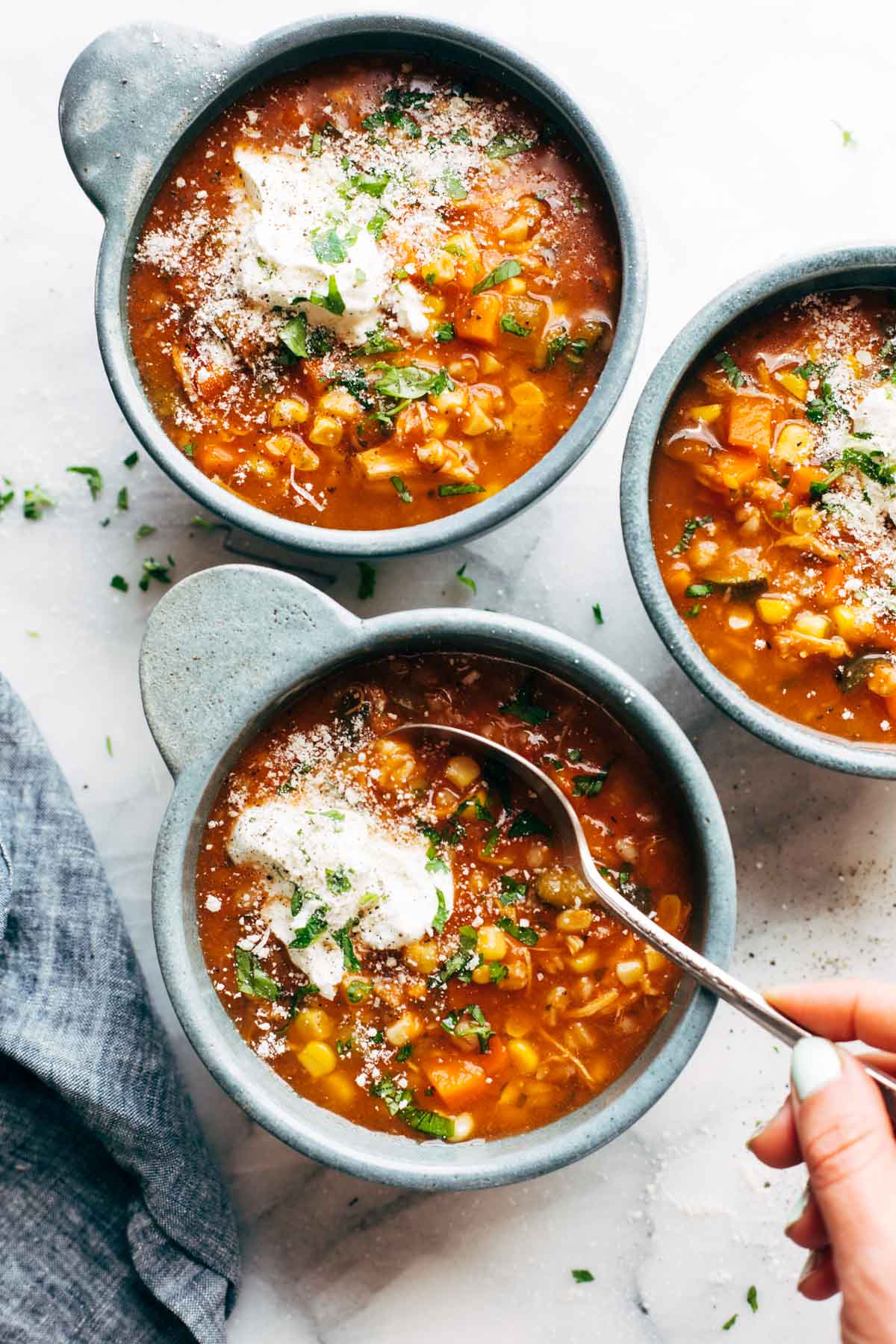 Don’t want to heat your kitchen up by making soup? Grab your Instant Pot! This recipe from Pinch of Yum has a tomato base, and is filled with chicken, zucchini, corn, and an optional grain like quinoa or rice. 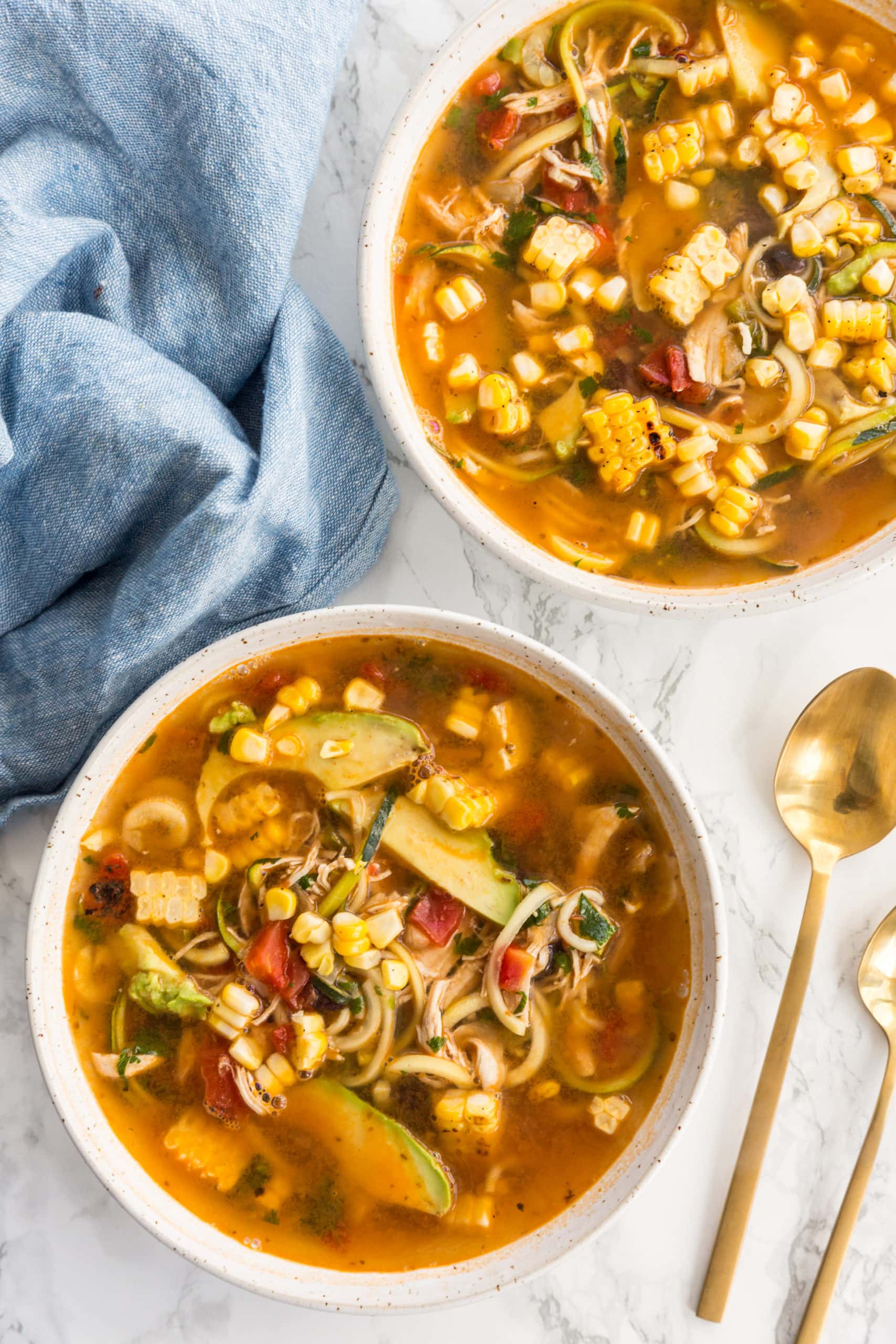 5. Chicken and Corn Tortilla Soup with Zoodles from Inspiralized

Tortilla soup is one of my all-time favorite soups. The broth is so flavorful, it packs some heat, and there’s a lot of great textures. This recipe from Inspiralized is a seasonal twist on the classic Mexican dish. Instead of tortilla chips, she uses zoodles for added crunch. This flavorful soup is also a great make-ahead option because it gets even better after a couple of days in the fridge. 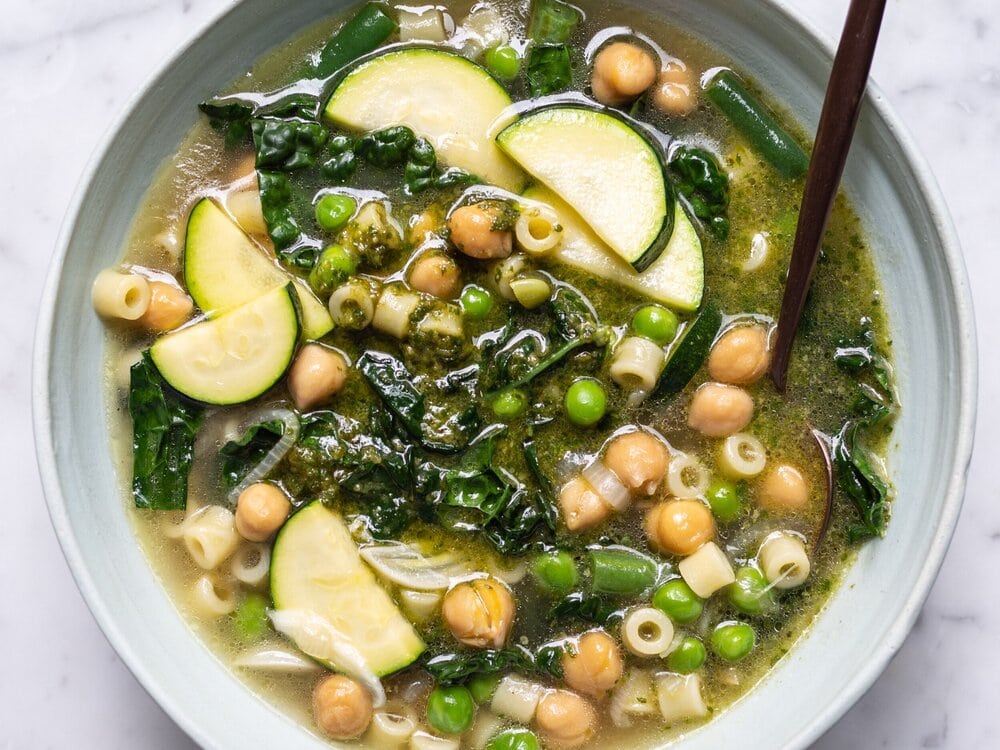 If you, like me, crave all the green things during the summer, this is the soup for you. This fresh take on minestrone is filled with peas, zucchini, and green beans, and the whole thing is drizzled with homemade basil pesto. There’s a lot of room to play around with this recipe, too. You can switch out the beans, the veggies, and even the kind of pesto based on what’s available. 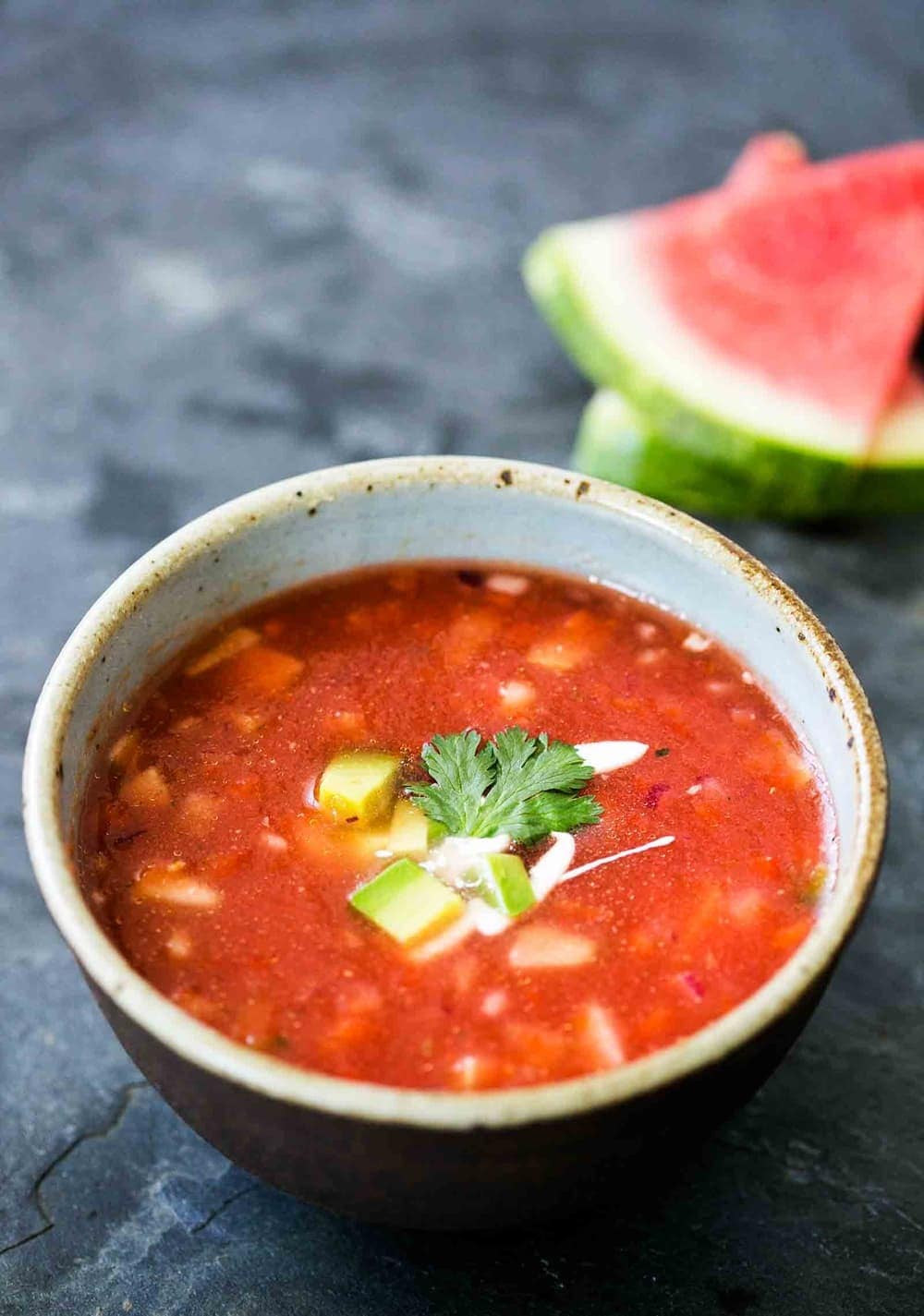 I’m always trying to figure out how to incorporate more watermelon into my diet during the summer. Eating it out of hand or in salads is always nice, but what else am I missing out on? The answer, it turns out, is gazpacho! Instead of the traditional tomato, watermelon takes a leading role (but there’s still plenty of tomatoes and cucumbers to be found in this soup). Trust me: you’re going to want to make a big batch of this. 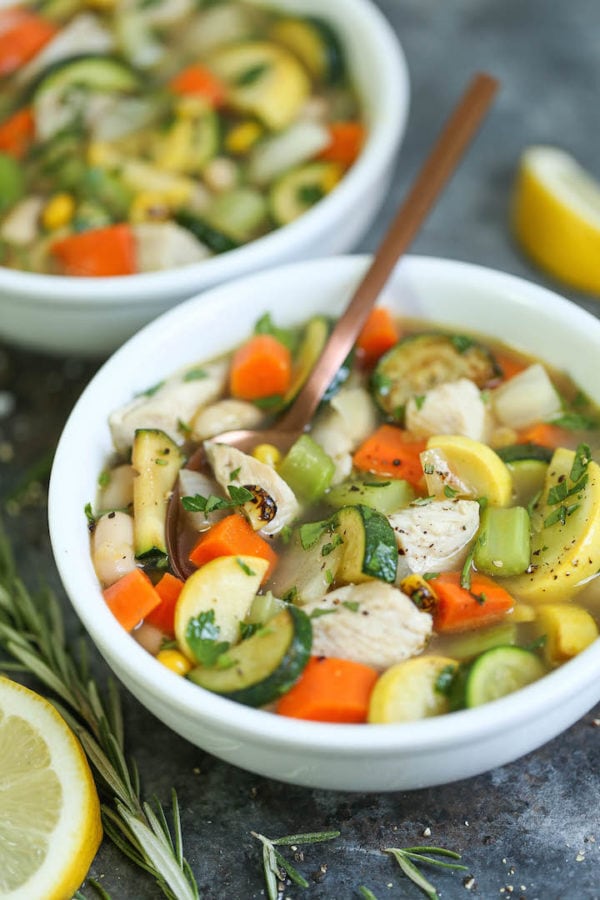 Just because it’s hot out doesn’t mean you don’t deserve something comforting! This soup is everything you know and love about the classic dish with plenty of zucchini, yellow squash, and corn in the mix. 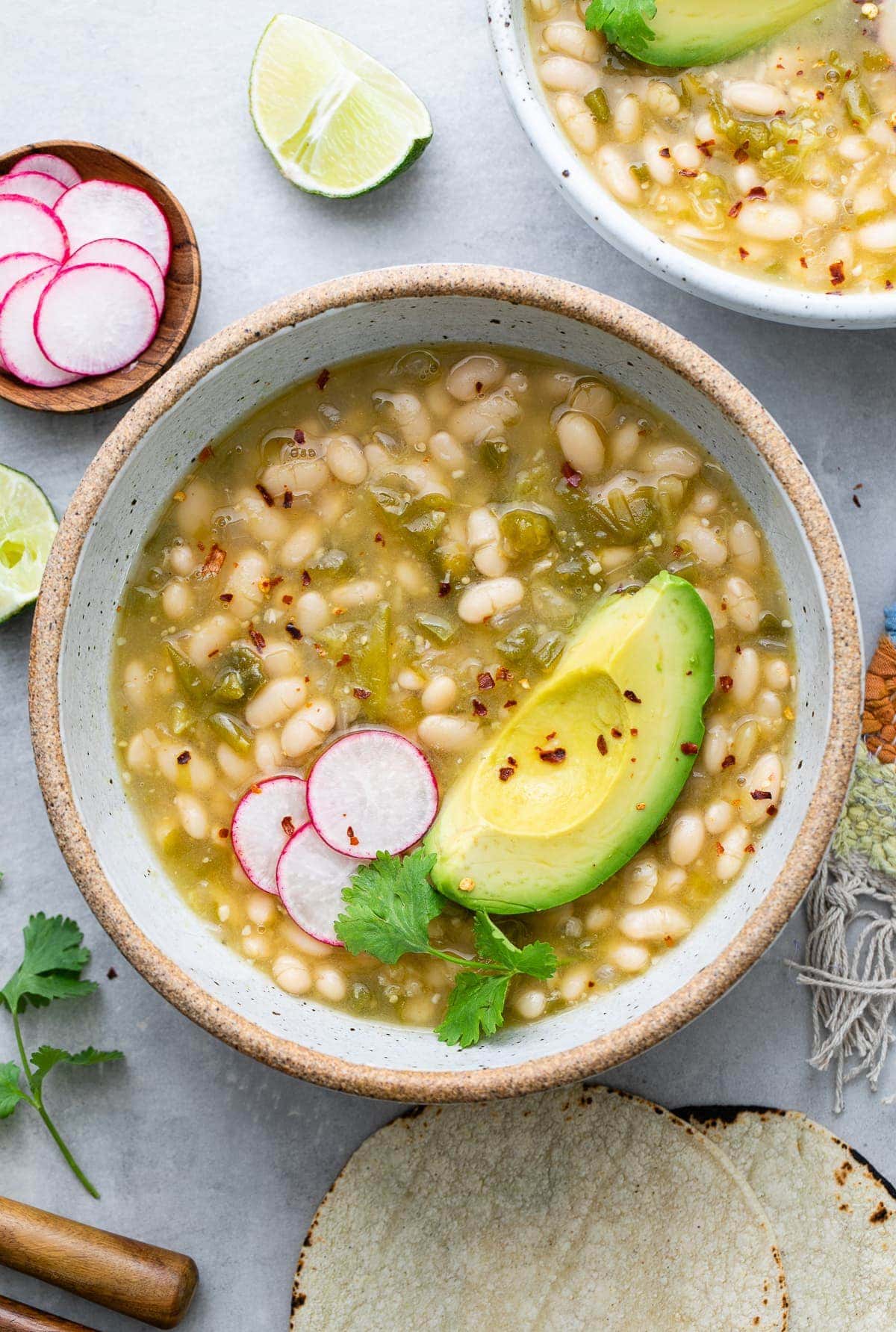 9. White Bean and Tomatillo Soup from The Simple Veganista

This vegan soup is chock-full of white beans, fresh tomatillos, and a couple of jalapeños for heat. Not only is this soup a heartier option for summer, it’s also a great source of protein and fiber. Top it with cooling avocados, lime, and cilantro, and serve with flour or corn tortillas. 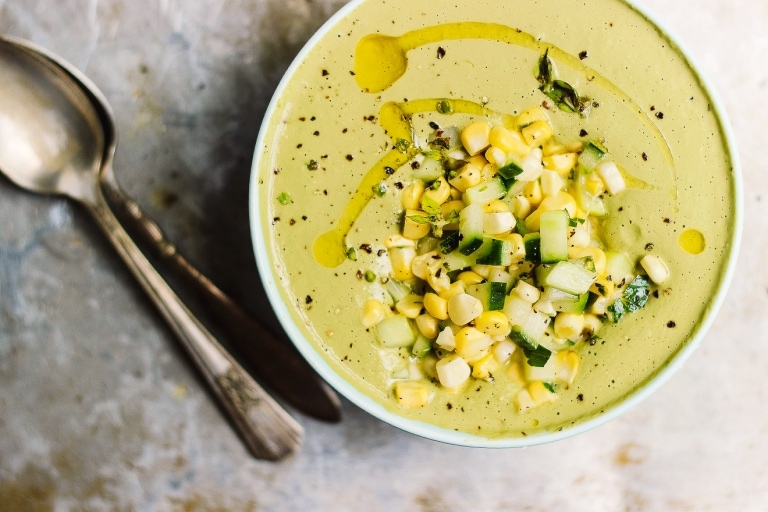 Photo Credit: With Food and Love

10. Chilled Cream of Basil Soup from With Food and Love

The base of this chilled soup is raw, soaked cashews blended with basil and spinach. The result is a creamier soup compared to the others on this list, and one that’s loaded with good fats and protein. The soup is topped with a simple corn and cucumber salad, and a healthy drizzle of olive oil.