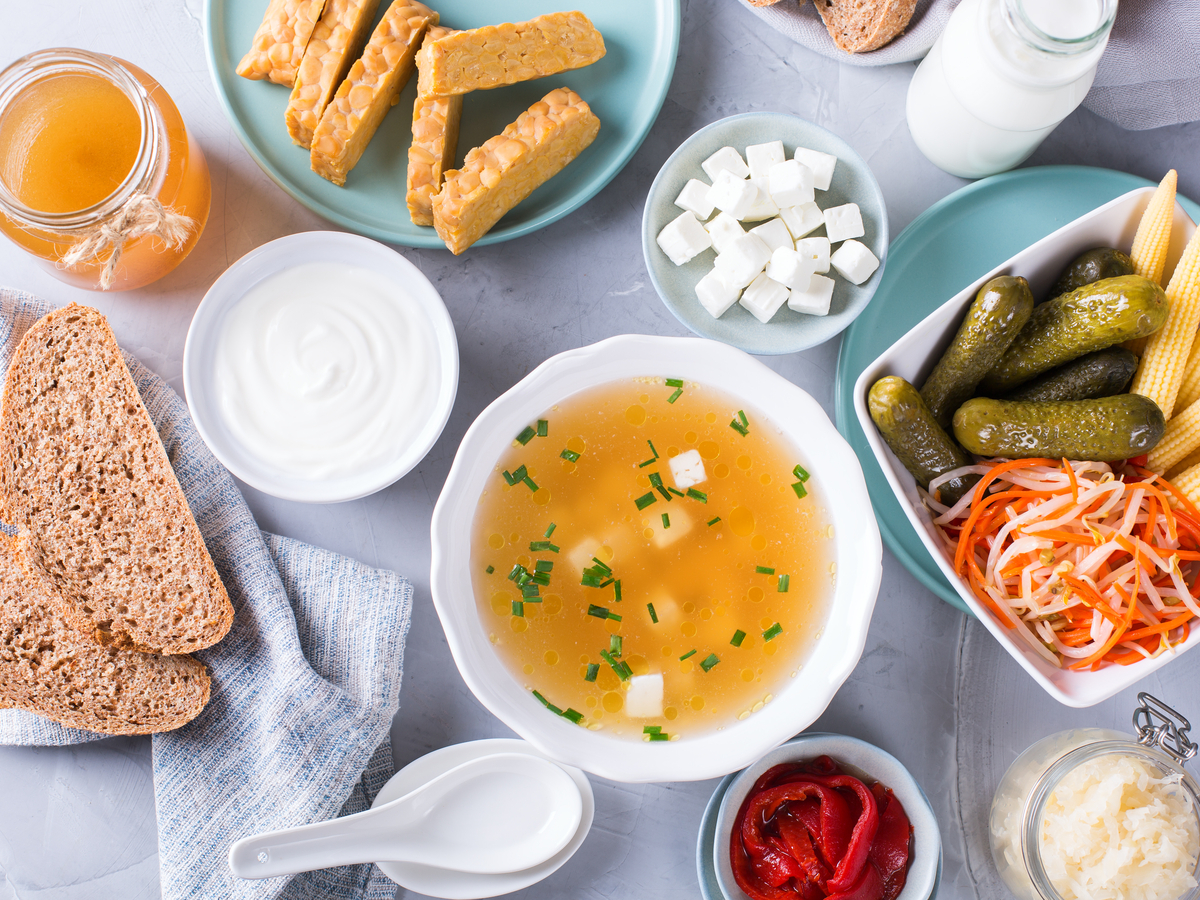 Just when we were finally all set on consuming probiotics and beginning to wrap our brains around why we need prebiotics, there’s a new word gaining steam in microorganism terminology: postbiotics. As it turns out, there are some important differences between the three. So what are postbiotics, why should you care about their discovery, and — most importantly — will your health benefit from trying them? Read on to learn everything you need to know about this new category of gut-friendly bacteria.

The International Scientific Association for Probiotics and Prebiotics (ISAPP) convened in 2019 to agree upon the definition of postbiotics; that’s how newly discovered they are. Postbiotics are the byproduct, aka the waste, of probiotics. First, the good bacteria in our guts feast on prebiotic foods, which have fiber that is otherwise indigestible to us. Then, by being made strong from having nutrition, those probiotics proliferate and do the great work of helping us maintain a strong immune system.

Read next: What’s the Difference Between Prebiotics and Probiotics?

Before learning about prebiotics, most of us didn’t ever think about what food probiotics eat. In the same vein, we never really considered what happens after they eat it, either. The answer to that is exactly the same for nearly all organisms: they excrete waste. While that definitely sounds unappealing, that waste (called postbiotics because it occurs after the bacteria eats) actually offers numerous health benefits. Let’s look at what those benefits are.

The benefits of postbiotics

Postbiotics contain organic short chain fatty acids, assorted enzymes, and carbonic substances. How is that helpful for our wellness? “It’s important to consume postbiotics,” says Amy Davis, RD, LDN. “They are believed to be responsible for many health benefits, including strengthening the immune system, helping improve digestive problems, and potentially having some cardiovascular and anti-cancer benefits.”

Studies have shown that postbiotics have the ability to help modulate, or better control, our immune systems. One study found that they directly help our immune system function properly, whether you’re healthy or you have digestive issues. For healthy individuals, they were shown to improve overall wellness, and for those with chronic issues, they found relief from illness symptoms.

If you’ve ever experienced gas or bloating from taking prebiotics or probiotics, you’re far from alone. Both are notorious for potential digestive upset. “Because probiotics and postbiotics are so closely linked, many of the health benefits, like immune and digestive health, are very similar,” Davis says. “However, one major benefit to consuming postbiotics over probiotics or prebiotics is that they will likely cause less digestive issues like gas and bloating. This is because they are the by-products of fermentation, so the process that sometimes gives GI-sensitive people issues is skipped over altogether.”

“Postbiotics are not living, so they are more stable than active probiotics,” says Marisa Moore, a registered dietician nutritionist and Nurish by Nature Made partner. “This means they may be an option for people who are immunocompromised and cannot take live, active cultures.” Studies back this up, too. The authors of one 2021 study published in Biologics, for instance, say that postbiotics are even more powerful than probiotics in some ways, without any of the downsides of probiotics. While more studies are needed, initial evidence is incredibly promising. Another study resulted in praise for the use of postbiotics in ill patients, and the study’s authors say that the results demonstrated postbiotics worked well for immunocompromised people, too.

Is it better to get postbiotics through supplements or diet?

Postbiotics are becoming available as their own products. So far, they’re mostly sold in pills along with probiotics or prebiotics, but they can also be purchased without those, particularly with other immune-boosting ingredients. Should we be trying these supplements, or is it better to get postbiotics through the natural process of eating prebiotic and probiotic foods?

“A supplement could make it easy,” Moore says. “But I encourage aiming for variety in the diet to naturally increase your production of postbiotics. You can get prebiotics from bananas, sunchokes, asparagus, onion, and garlic, among others. Another very common source is chicory root (or inulin) which is commonly added to high fiber bars, some cereals, granolas, and other foods. And probiotics are abundant in yogurt and other fermented foods.”

Because there are no firm dietary guidelines around bacteria consumption, Moore notes that whether you purchase postbiotics is an individual choice. “It’s based on a variety of factors, from your current diet and health status to supplement accessibility,” she says. “There are no formal guidelines surrounding how much would be enough.”

Davis agrees, telling us that while you can easily consume postbiotics as a supplement — typically in the form of sodium butyrate or dry yeast fermentate — she recommends putting your diet first. “My top recommendation for increasing postbiotics would be to increase your intake of probiotic-rich foods, like plain yogurt, cultured cottage cheese, kombucha, and kimchi,” she says. “At the same time, also increase foods high in prebiotics, such as oats, flaxseed, asparagus, garlic, and onions. Increasing your intake will naturally boost the amount and variety of postbiotics.”

There’s also the diversity of organisms from assorted foods to consider. “As long as individuals are eating probiotic-rich foods, and getting the recommended 25-38g of fiber per day, the postbiotics naturally produced by your body should be sufficient,” Davis says. “Another factor to consider is that your body will create a larger variety of postbiotics than the individual one or two types of postbiotics found in a supplement.”

The caveat to food consumption

While we absolutely agree with Davis and Moore that a healthy diet is better than supplementation in general, it’s also important to consider your own digestion and immunity situations. If you are someone who gets uncomfortably bloated or gassy when you eat prebiotic-rich or probiotic foods, eating more of them for the sake of getting postbiotics isn’t a sound idea. For anyone who experiences digestive upset from those foods, it makes more sense to take postbiotics alone, as their own supplement. After all, if you’re looking to improve upon your health, upsetting your system with foods that it cannot properly process should be avoided.

Postbiotics are the waste produced by probiotic bacteria after they eat prebiotic fiber. While postbiotics have been around for as long as probiotics have, they were only discovered and defined a few years ago, in 2019. There are numerous benefits to ingesting postbiotics, including their ability to improve one’s immune system. Because they are inactive, they may be easier to digest for people who cannot properly process probiotic or prebiotic foods or supplements. If you have a healthy digestive system and you consume prebiotic and probiotic foods or supplements, you may be getting all the postbiotics you need. But if those foods cause digestive upset for you, trying postbiotics as their own supplement may be a wiser choice. There is still much to be learned about this emerging form of bacteria, but so far, the verdict on whether they will benefit your diet is a solid yes.

Read next: These Probiotic-Packed Foods Can Help Heal Your Gut