When we think about sleep-related habits, typically bedtime routines come to mind, not the morning rush. And while it’s true that evening sleep hygiene can set us up for either success or failure, the habits we have earlier in the day can also have an impact on how refreshed we feel upon waking.

Read next: Better Sleep Means Better Wellness — So Are Sleep Aids Actually Good for You?

“Morning habits can have an immense impact on one’s sleep quality because they can affect the 24-hour sleep and wake cycle,” says Po-Chang Hsu, MD, MS, and Medical Content Expert at Sleepingocean. So our morning routine doesn’t just affect whether we get an extra ten minutes of snoozing — it may also set us up for failure at bedtime. According to several sleep experts, here are the morning habits that are actually ruining your sleep, and what to do instead to greatly improve the quality of your shut-eye.

1. Waking up too early

It may seem obvious that waking up too early is something that interferes with sleep — clearly, if we’re awake, we’re not sleeping — but by depriving ourselves of some critical sleeping hours in the morning, we can also end up sleeping poorly at bedtime, and end up fall asleep later than is healthy. “Early morning awakening is a common feature of insomnia,” says Carleara Weiss, Ph.D., MSH, RN, and sleep science advisor for Pluto Pillow.

“Sometimes, due to academic or professional requirements, we set the alarm to wake up too early to get ahead of traffic, prepare the kids for school, or attend early morning classes,” says Alex Savy, Certified Sleep Science Coach and Founder of Sleepingocean. “This causes the body to get exhausted quickly, and a cat nap later in the day can accidentally turn into full daytime sleep. This habit can disrupt the sleep cycle and make one find it hard to sleep at night.”

Instead, Weiss suggests that you adjust your schedule to accommodate seven to nine hours of sleep, and try to establish morning routines that don’t require waking in the wee hours. Early rising is less problematic when it comes after a proper amount of sleep, and if the realities of your work or family situation don’t easily allow for a less-painful alarm time, taking daytime naps is fine, but don’t overdo it, says Savy. “A daytime nap of more than 30 minutes may affect nighttime sleep.”

A few extra ten-minute increments of sleep may seem like they’re improving your quality of rest, but the snooze alarm is not actually benefiting you in the sleep credit column.

“Although sleeping for another ten minutes may sound tempting, hitting the snooze button does more harm than good,” says Weiss. “Feeling lethargic and groggy, having a slow reaction, and experiencing slow thinking are among the harmful effects of snoozing the alarm clock.” Furthermore, if your body gets used to anticipating an early alarm with several snoozes to follow, you are potentially causing yourself sleep anxiety and stress at night, which also affects your quality of sleep. 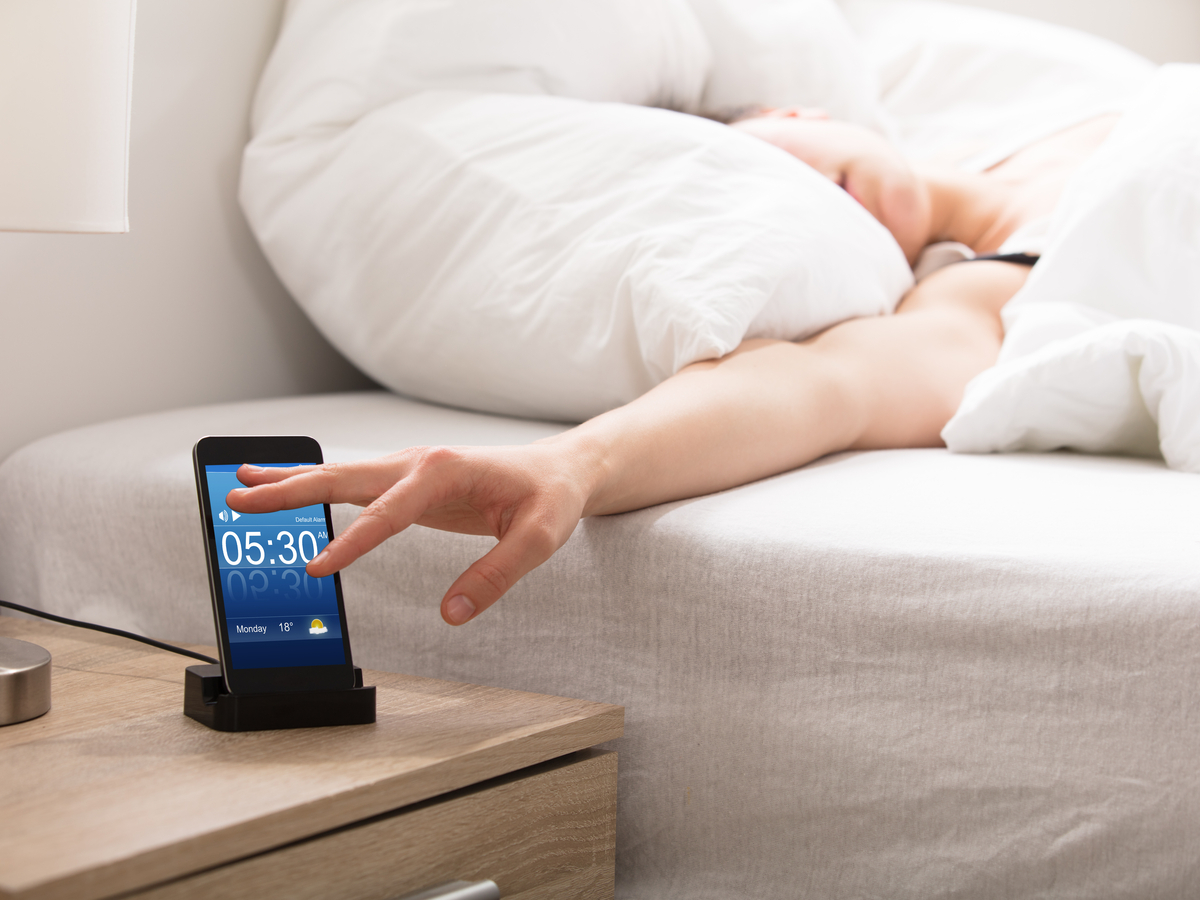 3. Having an inconsistent wake-up time

Sometimes, it’s great to sleep in. But waking up and getting out of bed at different times on a regular basis can negatively affect your sleep, regardless of how tired you are. “Waking up at inconsistent times every day can shift one’s circadian rhythm, causing sleep issues, disruptions, and an overall decreased sleep quality,” says Hsu.

Instead, try to spend a week going to bed and getting up at the same time every day. While it may not be easy at the beginning, once the good habit is formed, you may find yourself drifting off much more quickly, and waking more refreshed — maybe even without an alarm.

Your bed should be a special space — and work shouldn’t enter into it. “For freelancers or those who work from home, it may seem delightful to wake up in bed, have coffee, grab the Mac on the nightstand, and start the day’s work right in their pajamas,” Savy says. But he also notes that working from bed decreases sleep quality because your brain starts to associate that space with being mentally active.

5. Being in the dark, literally

Just as melatonin responds to darkness signals at night to help you fall asleep, cortisol is a hormone that responds to light to help you wake up. Obviously sunrise varies throughout the year, but turning a light on in your bedroom once it’s time to get up can help trigger your waking instincts, rather than languishing in a dark room.

“The brain responds to the light changes during the day,” says Hsu. Getting plenty of daylight in the morning can help people keep their biological clocks running smoothly and sleep better. Conversely, not getting enough light exposure during the day can cause circadian rhythm disruptions and, consequently, reduced sleep quality.”

6. Not having a consistent morning routine

In addition to not having a consistent wake-up time, not having a wake-up routine can set you up for fatigue and lack of concentration during the day, says Weiss. “Irregular wake-up times and rushing out the door as soon as you get up do not allow the brain and the body enough time to adjust the transitions from sleep to wakefulness,” she says.

Instead, Weiss advises creating a morning routine and sticking to it. Again, habits are formed through repetition, so after a few days of good morning behaviors, they will start to become habits, and you’ll find yourself going through the motions with more and more ease. “Our body works like a clock, and consistency is key to good health,” says Weiss. “Use the first hour upon awakening to establish a synchronized circadian rhythm that will keep you sharp during the day and help you sleep better at night. This can be achieved not only by waking up at the same time every day, but also by trying to exercise and eat breakfast at the same time every day.”

It’s also not a good idea to spend too long lounging around in bed after you wake up. “Don’t spend more than 20 minutes in bed after that first alarm,” says Savy. If you need a moment between waking and actually rising, it is better spent meditating, considering the day ahead without looking at your phone, or practicing gratitude.

7. Having coffee too early

This may feel like bad news for many who feel they rely on a cup of morning brew to help them wake up, but you can improve your sleep cycle greatly over time by delaying your coffee consumption. “Caffeine is known to awaken the body and energize the mind, but drinking it before 11 a.m. is counterproductive as far as nocturnal sleep is concerned,” says Savy. “Many studies have shown that coffee can disrupt cortisol production, the morning hormone that takes over from melatonin after its all-night shift. Peak cortisol production happens between 8 and 9 a.m., but drinking coffee interrupts that natural regeneration process.”

“Coffee’s effect on sleep cannot be overemphasized,” continues Savy. “A cup of coffee can affect sleep for up to 16 hours as it interferes with the natural circadian melatonin rhythm.” So consider limiting your caffeine intake, and try to get your coffee fix a little bit later in the morning so you’re not disrupting your body’s natural cortisol production.

8. Not making your bed

“Never leave the bed untidied after waking up in the morning,” says Savy. “Chances are it will remain the same when it’s time to sleep.” Also the slightly chaotic feel of an untidy room can set your psyche on edge when it comes time to lay down and rest. Clutter is associated with stress and life dissatisfaction, so tidying-up might genuinely be good for your mental health. Fortunately, making your bed can become a good habit very quickly, and there’s reason to believe that when you make your bed, you’ll sleep better in it, too.

Read next: 9 Totally Natural Ways You Can Fall Asleep Faster