The Totally Free Way to Deal with Anxiety

For as long as I can remember, I’ve been anxious. Not panic-attack-level anxiety. More often than not, there’s a feeling of discomfort in my chest or stomach. Or I’ll catch myself mindlessly picking at my cuticles to the point that they bleed. Or I’ll hear a faint voice pop into my head and whisper “something’s about to go wrong,” “you’re not quite good enough,” “you probably shouldn’t even try,” or “you just got lucky this time.”

I’m not alone in feeling perpetually on edge. About 18% of U.S. adults have an anxiety disorder, according to the Anxiety and Depression Association of America. But, while research supports the effectiveness of treatments such as cognitive behavioral therapy (CBT) — a type of talk therapy in which a therapist helps you become aware of distorted or negative thoughts so you can view and respond to them more effectively —only about 37% of anxiety sufferers actually receive treatment. Stats are similar for other mental health disorders like depression, too.

There are some common barriers to the traditional therapy model. It’s time consuming, somewhat inconvenient, and expensive. I personally feel all of these things.

The good news: Technology has stepped up to the plate. There are apps that connect you with real therapists (like Talkspace, convenient but still relatively pricey). And there are artificial intelligence-powered chatbot apps that are free. They’re basically little therapy robots in your pocket.

Given my budgetary concerns, I decided to try these bots out to see if they’re legitimately helpful.

After some research, I settled on two reputable-looking apps: Woebot and Wysa. Clinical studies on both of these apps (this 2018 study on Wysa, and this 2017 study on Woebot) suggest they may boost mental health. I checked in with both apps daily for about a week.

So, what can you expect from a mental health bot?

With both apps, there’s no illusion that you’re talking with a real human being. Woebot is a quirky artificial intelligence robot, while Wysa is a cute AI penguin. Upon opening the apps, both Woebot and Wysa asked me a series of simple questions. The purpose? To gauge my mood, to see what times worked best; and to understand what was bothering me. From there, you chat, and the bot replies/

Both apps were developed with cognitive behavioral therapy principles (CBT) in mind. Meaning, they’re great at pointing out distorted, negative thoughts and asking questions that get you to shift your perspective.

Here are a few more specifics on each app and how I used them.

Here’s what to expect from Woebot.

Woebot checks in once a day and takes about 10 minutes. First, it has you rate your mood. Then, much of the conversation centers around how you’re feeling, whether your thinking around a particular situation is distorted, and how to reframe those thoughts so you feel better. 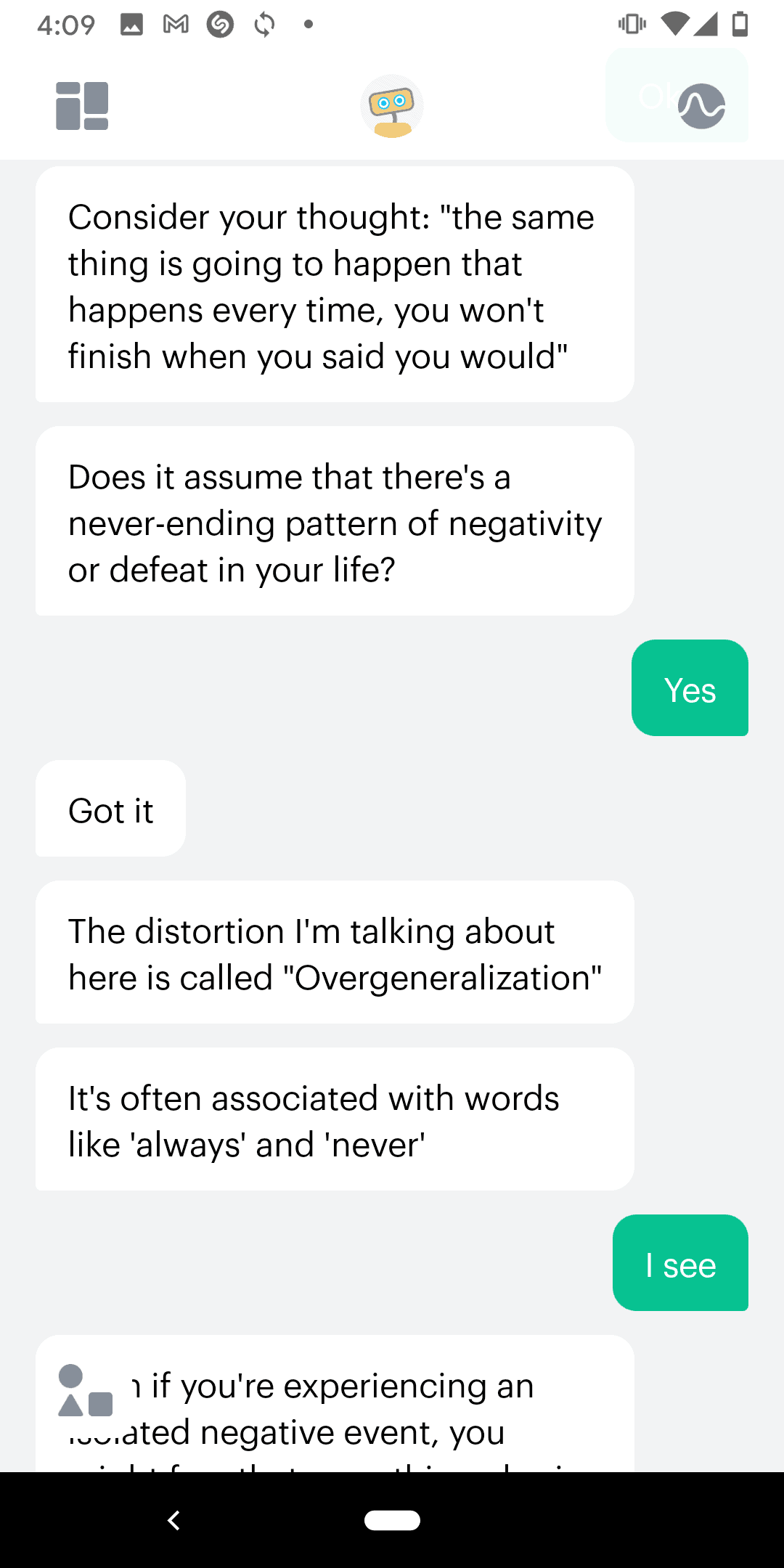 When I was dealing with work-related anxiety, Woebot asked me to identify three negative thoughts running through my head. It then helped me identify the specific type of distorted thinking I was engaging in with each thought. Then, it guided me through an exercise in which I reframed and rewrote one of my negative thoughts. This was surprisingly enlightening (I learned I’m really self critical.)

Woebot also walked me through activities such as gratitude journaling, in which I’d list out things that had gone well recently. These were all compiled in one place so I could reference them later if I needed a boost.

Here’s what to expect from Wysa.

Similar to Woebot, Wysa checks in daily. It has you rate your mood by sliding a big yellow emoji face up or down. From there, you talk about what’s bothering you. Wysa weighs in with supportive, CBT-inspired responses and prompts to help you reframe your thoughts—much like Woebot.

When I was completely overloaded with a variety of projects, Wysa had me list out all my tasks. Then, it asked me if any of these were in my control. It then prompted me to take 2 minutes and make a list of everything I could do to make these situations a bit better. None of these recommendations were groundbreaking. In fact, I knew they were what I should be doing — but the fact that someone (well, some thing) was guiding me through it actually made me engage in these healthy practices. 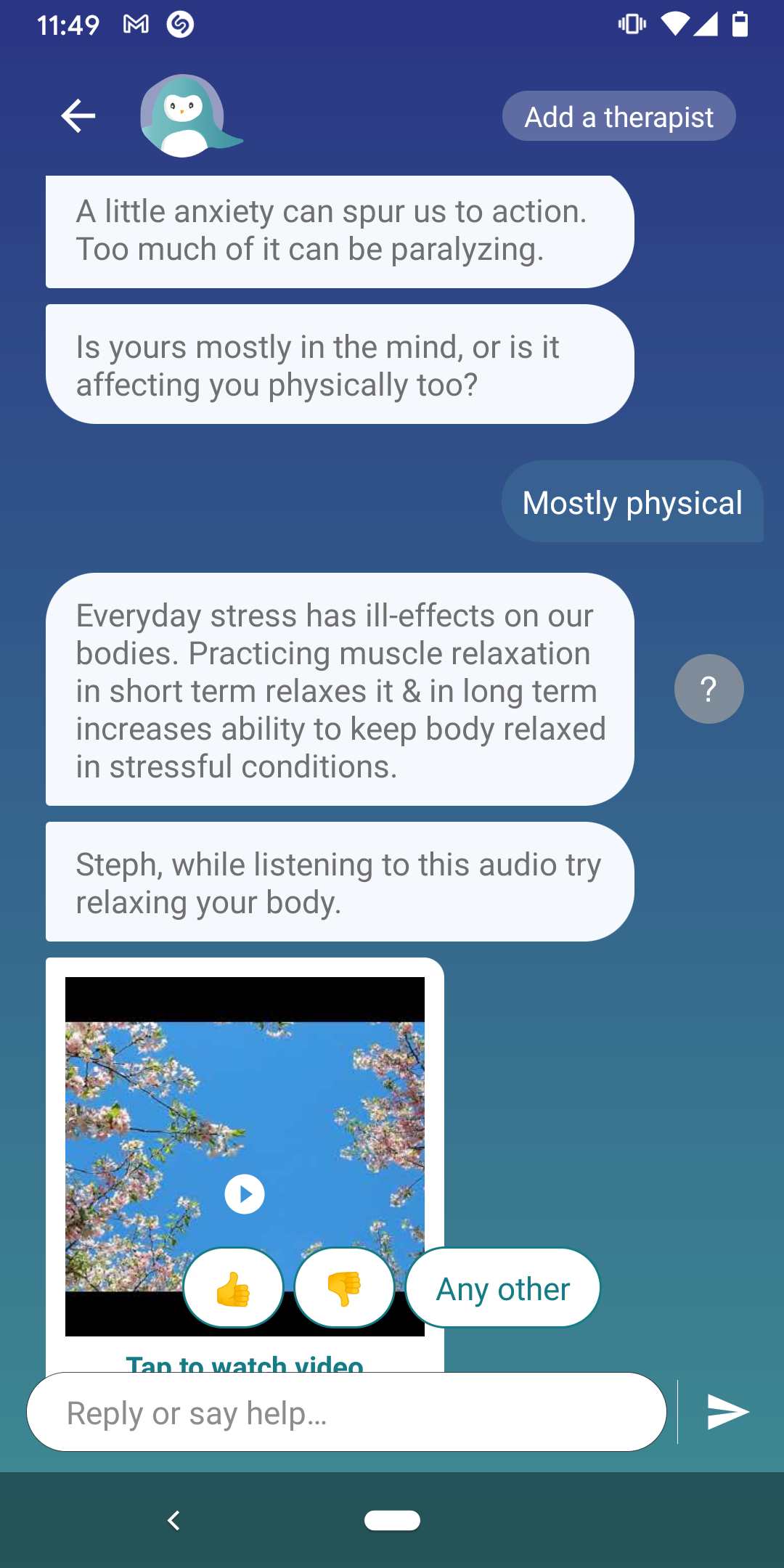 Compared to Woebot, Wysa was better at serving up specific exercises (both physical and mental) to get through tough situations that were affecting my mental health. For example, when I was experiencing a lot of physical anxiety and tension, Wysa sent me a quick video guiding me through the 12 poses of a yoga Sun Salutation — which helped me get out of my head and into my body. Another time, when I was distracted, it sent me a helpful 4-minute guided meditation to help me refocus.

The pros of spilling your guts to a mental health bot.

Honestly, I was expecting to absolutely hate these apps, but I found them surprisingly useful. I won’t be using them every day, but I’m keeping both of them on my phone for a few reasons.

The cons of spilling your guts to a mental health bot.

Of course, there were some downsides. To come up with appropriate responses, Woebot and Wysa hone in on specific keywords. So if you include too much detail or nuance, they get a little lost in the word soup. This can be frustrating (because it becomes super clear you’re chatting with a set of code), and it’s why neither app could ever be a replacement for seeing a real therapist, if that’s what you truly need. Both apps do allow you to upgrade (for a fee) and chat with a real therapist.

Based on my experience, these apps can be one helpful component in a well-rounded self-care routine that supports mental health — and they’re particularly good at helping reframe toxic thoughts and just making you feel a little more supported. You don’t have to have full blown anxiety or depression to benefit either. Personally, I’ll be using them to help bridge the longer gaps between my real-life therapy appointments, but I’d recommend them to anyone who’s interested in dipping their toe into the world of mental wellness.