Here’s Exactly How to Deal with Your Food Cravings

Can’t step away from the chocolate, chips, or cheese? Before you go down the shame spiral, know that it isn’t simply a lack of willpower. There are physiological reasons why we have certain food cravings, and understanding that can help us stop the cycle.

Why Some Foods Are So Addictive

In a 2015 study from the University of Michigan, researchers asked people about the foods they just can’t seem to quit. Not surprisingly, the most addictive foods participants reported have two major things in common: High fat content and high glycemic load, which is just a fancy way of saying that eating them causes your blood sugar to spike.

Now, it’s totally normal for blood sugar to rise after we eat something, specifically carbohydrates, and fat is an essential part of a healthy diet. But how high your blood sugar rises, and what types of fat and how much of them you eat, can mean the difference between enjoying and overdoing it.

There’s also a psychological aspect to food addiction. “So many of us learn to use food to pacify our uncomfortable feelings—to numb our boredom, rejection, shame, loneliness, and anxiety,” says Megan Bruneau, MA, RCC, an eating disorder therapist and body image expert based in New York City. “So food becomes the drug of choice for most Americans.”

Lynn Schultz, LCSW, a therapist in New York City who specializes in treating eating disorders, works with her patients to distinguish whether it’s physical or emotional hunger they’re trying to sate. “Rather than seeing food as ‘addictive,’ I look at why this food is creating this pattern for you,” she says. “And then, based on that, we look at interventions that break a negative cycle.

The good news is that you can break the cycle. 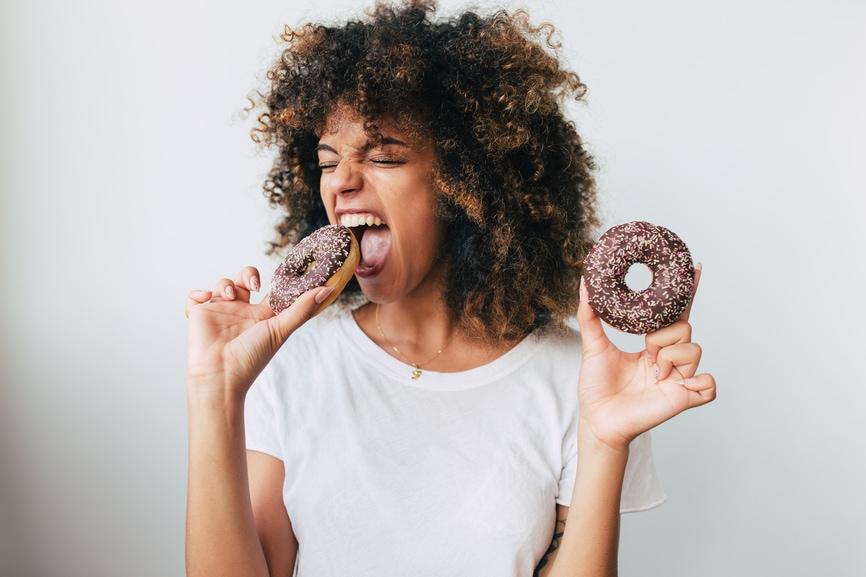 How to Deal with These Common Food Cravings

A study published in the journal Obesity found that chocolate cravings, and the pleasure one derives from eating it, are pretty similar to what people experience during drug addiction. This is especially true when you’re eating chocolate cake, cookies, and ice cream, i.e. foods that have added sugar and calories to the chocolate base.

The fix: Try dark chocolate. If you think your chocolate habit is more than just a simple pleasure, challenge yourself to go without it for a few days, or even up to a week. When you do indulge, keep portions small—portion out one to two squares of the dark stuff and before eating it, put the remainder out of sight. Look for healthier dark chocolate brands made without refined sugar and with added nutrients.

With all that fatty oil and cheese, and a crust made of white flour… Pizza, it’s so hard to quit you!

The fix: Make healthier pizza with grass-fed, organic cheese and a cauliflower crust, which is full of fiber, so you stay off the blood sugar roller coaster.

Their salt and fat content make chips a food that’s easy to crave and hard to stop eating.


The fix: Veggie chips to the rescue! Bake up beet, kale and other types of baked veggie chips. In a time crunch? Grab a bag of Terra Chips or Good Health‘s chips.

Who can blame Cookie Monster? A study published in the journal Addiction Biology actually found that rats became as addicted to Oreos as they did to cocaine (yikes).

The fix: Making your own cookies with whole-grain flour or nut flours, will boost both the fiber and protein content. You can also reduce the sugar in the recipe. Or, better yet, have sprouted whole grain crackers paired with goat cheese and fruit.

We all scream for ice cream — and it’s no surprise, given its luscious sugar-fat combo.

The fix: Make ice cream a special going-out treat. Order the kid size and savor it. Or indulge on frozen bananas, mangos, papaya and other fruits that have a heavier texture. Freeze them and then process in a blender for a delicious satisfying ice cream-like treat.

Along with the high fat and starch, French fries’ saltiness can be a draw to people struggling with adrenal fatigue, since their bodies may crave sodium to balance out their electrolytes.

The fix: Sweet potatoes, parsnips, carrots, and avocados all make a wonderful swap for standard potatoes. Making them yourself allows you to control the salt and fat.

Get this: There’s a naturally occurring chemical called casomorphins in cheese that produces an opioid effect. So yes, you literally can become chemically addicted to cheese. The high-fat content, sodium, and naturally-occurring milk sugars also contribute to its addictive traits.

The fix: We’re not a fan of fake or low-fat cheeses, so your best bet is to have grass-fed and organic varieties and eat them in smaller doses as a special treat.Easily digestible sheep and goat’s milk cheeses, are healthy options that are great paired with fresh fruit.