I love coffee: the taste, the smell, the ritual… but it doesn’t love me. Like so many others, coffee tends to give me stomach irritation and the jitters. I also don’t need anything to mess with my sleep, which is precious enough as it is. A lot of people are sensitive to coffee, which is one reason why mushroom coffee is now trending. And there are so many other mushroom coffee benefits beyond lowered caffeine, including potential immunity-boosting qualities and improved brain function.

What is mushroom coffee?

Mushroom coffee is typically made from a combination of ingredients, one of them being (not surprisingly) mushrooms, along with coffee or cacao. As it turns out, brewing tea from mushrooms (chaga, in particular) is a long-running practice by folks living in Scandinavia and Russia. Mushrooms are a functional food, believed to have wide-ranging health and wellness benefits.

Some mushroom coffees also contain herbs and other beneficial ingredients designed to give you a sustained boost of energy — without the jitters, stomach upset, or telltale crash-and-burn once it all wears off.

We recently tested out products from three different companies and found our new favorite mushroom-filled brews. 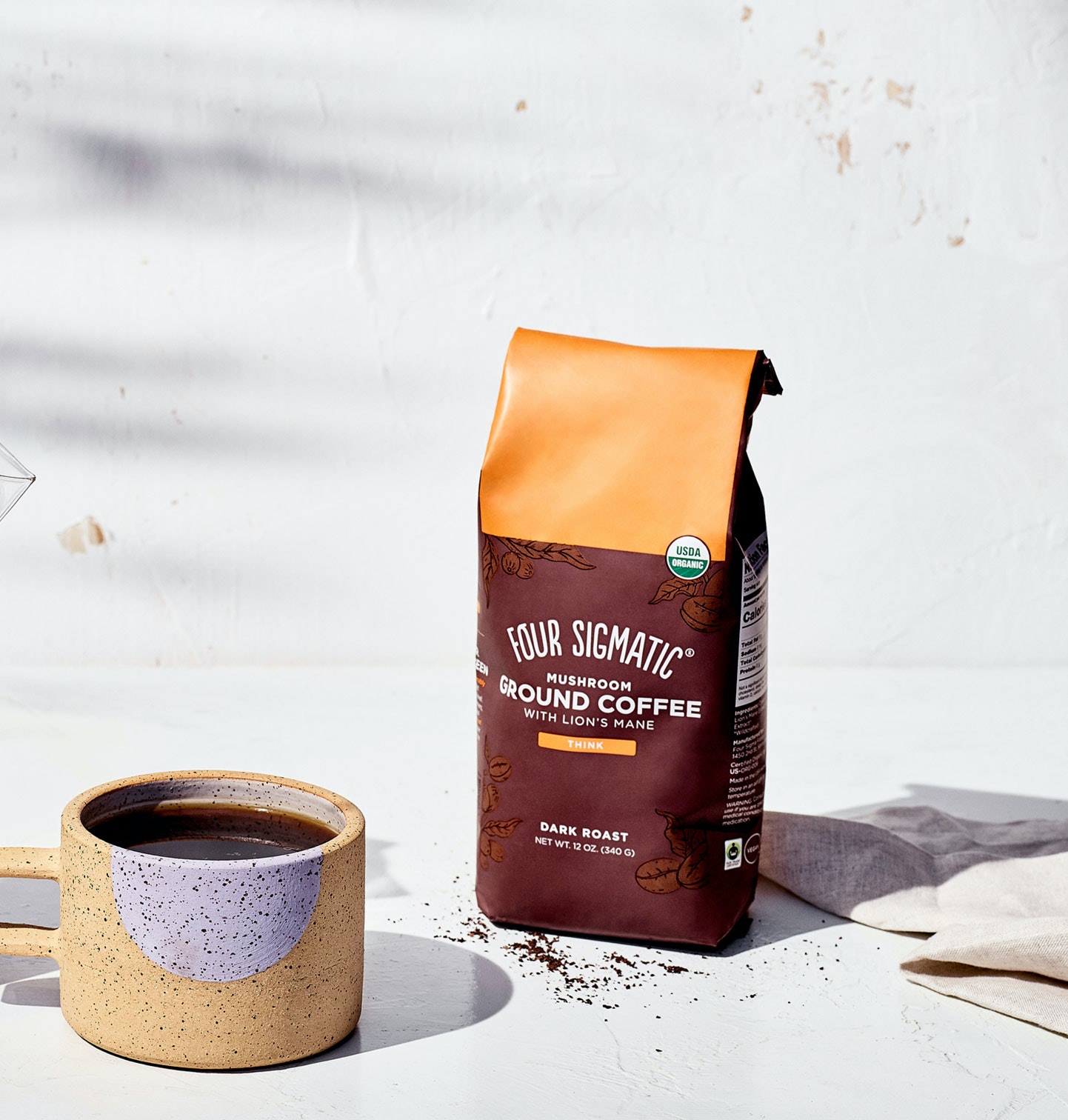 The scoop: Four Sigmatic was founded by Tero Isokauppila in 2012, who grew up on a farm in Finland, and whose grandparents brewed mushroom tea during WWII. Finland has a very strong coffee culture, and people have also been brewing chaga (mushroom) tea there for decades. Isokauppila says it’s estimated that between 4 and 10 million pounds of chaga grow in Finnish woodlands. This mushroom has been shown to have a positive impact on brain functions, including learning and memory.

What’s in it: You get a combination of single-origin, fair-trade organic arabica coffee along with extracts of organic lion’s mane and chaga mushrooms (250 milligrams each). This brews just like regular coffee.

Caffeine content: 150 milligrams. To put this in context, a 12-ounce cup of coffee contains 136 mg of caffeine. For a lighter dosage, their Balance Coffee blend has just 75 mg of caffeine.

Read next: 5 Myths About Caffeine — Debunked

The benefits: The company says it produces “hours of crash-free focus,” as the mushrooms help to curb any negative effects like jitters and anxiety that normal coffee brings.

The taste: Like straight-up coffee, without any real discernible mushroom earthiness.

The feel: A gentle boost of energy. No stomach irritation. 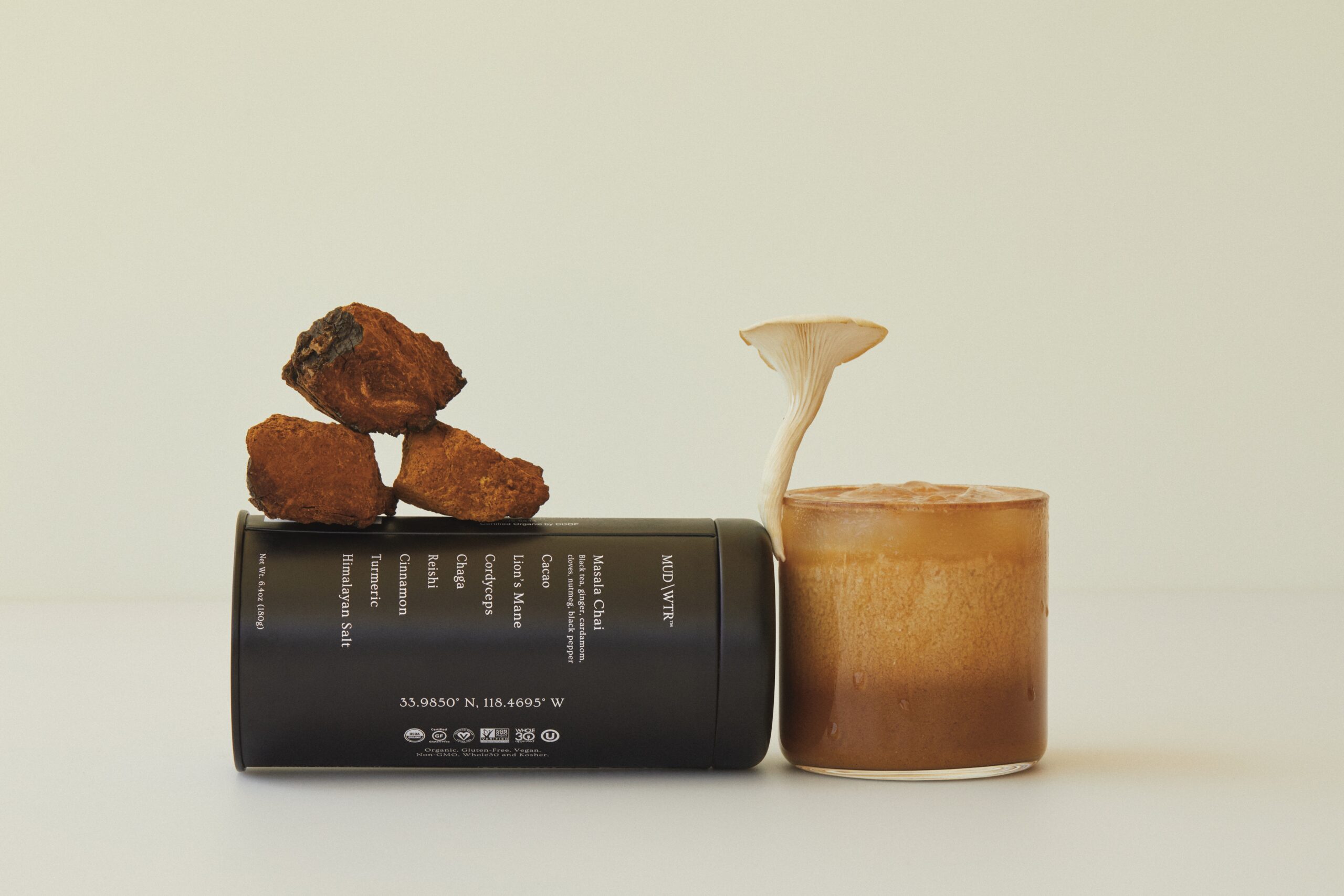 The scoop: You have to hand it to this brand: it seems to be all over everyone’s social media feeds these days. The cheeky vibe translates into all of its packaging and product presentation. Founder Shane Heath worked in Silicon Valley for years and came up with the concept after having negative experiences with caffeine’s side effects — and after traveling to India and falling in love with chai.

What’s in it: Masala chai, cacao, and four organic mushroom types (lion’s mane, chaga, reishi, and cordyceps), along with turmeric, cinnamon, and Himalayan salt. The company uses whole mushroom powders that include both the mushroom and mycelium (which means you receive all the mushroom coffee benefits), and they aren’t extracted using water, alcohol, or other solvents.

Caffeine content and source: 30 mg, which is about ¼ to ⅕ of the amount normally present in a 12-ounce cup of coffee. This is derived from cacao and tea.

The benefits: Heath describes the contents as a “hall of fame ingredients list,” as it includes lion’s mane for focus, chaga and reishi to support a healthy immune system, cordyceps to promote natural energy, turmeric and cinnamon for their antioxidants, and cacao for mood and energy.

The taste: This one’s got some spice to it: it’s like a cacao-driven cup of chai, with a little bit of earthiness from the mushrooms. Not a bit of bitterness, though.

The feel: Smooth, sustained energy. No jitters, and no negative effect on my ability to fall asleep. 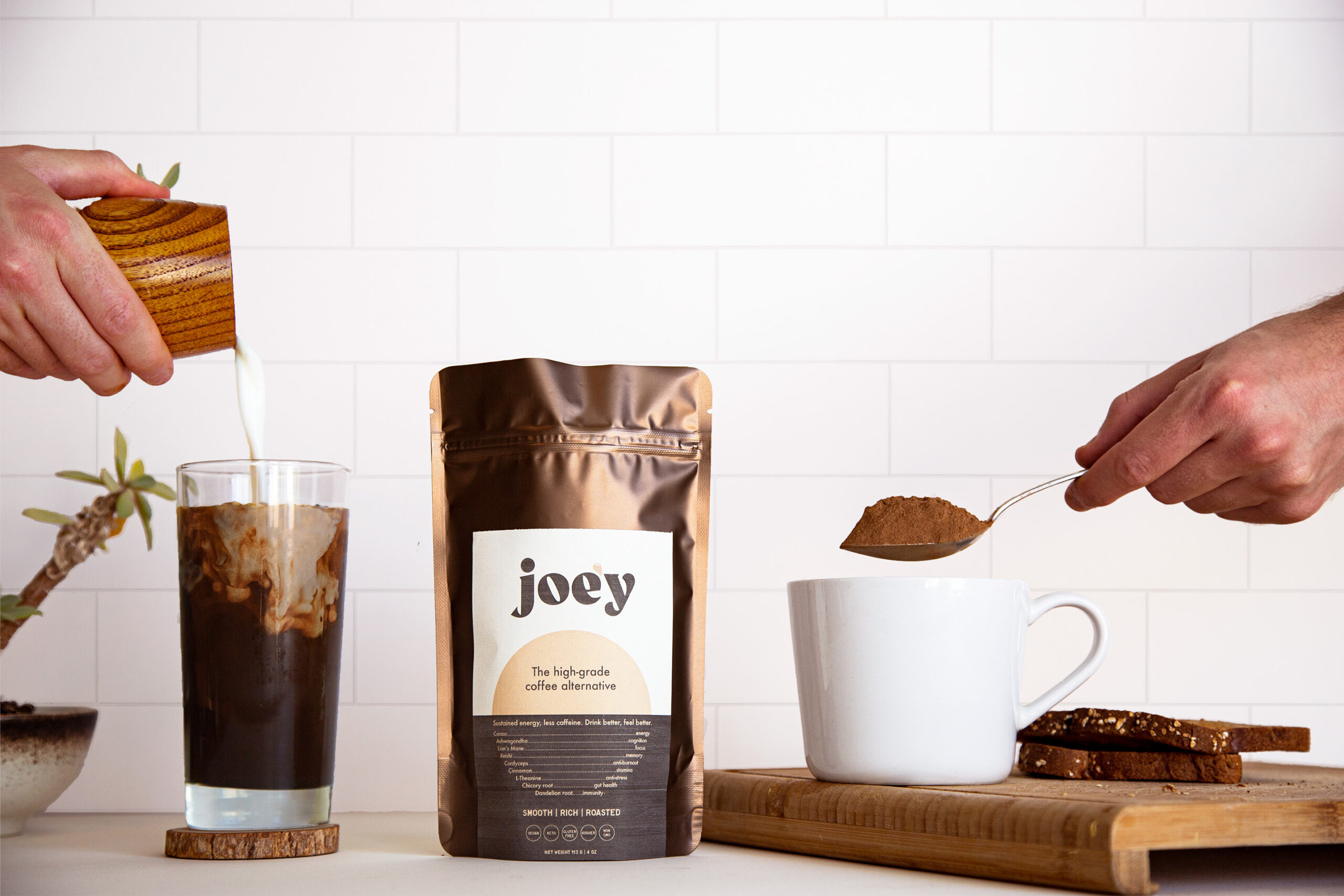 The scoop: joe’y contains a rich combination of ingredients. The best way to describe it is that it’s not coffee, and not quite tea, but it’s something else entirely. “joe’y is for the coffee drinker (or ex-coffee drinker) who enjoys aspects of that flavor profile, but wants a healthier option. Our aim is to ‘scratch the itch’ with flavor, while providing an entirely new, healthier drink to get the boost of energy,” says co-founder Brendan Smith, whose own caffeine habit and heart condition led him to develop the company with partner Amanda Fields.

Caffeine content: Between 25 and 50 milligrams of caffeine or ¼ to ½ the strength of a regular 8-ounce cup of coffee. The caffeine comes from cacao.

The benefits: The ingredients combine some prebiotic benefits (from the chicory and dandelion), with stress management and calming (ashwaganda and l-theanine), along with the mushroom benefits. Brendan Smith, one of the co-founders, says it’s hard to stop drinking coffee altogether, so it’s wise to be strategic about it. “Swap out afternoon coffee [for this] — it won’t mess up your sleep cycle because of the caffeine half-life we built into it,” he says.

The taste: Roasted, full-bodied, with a blend of sweetness and spiciness.

The feel: A definite boost, and a smoothly sustained release of energy.