I Instantly Made Healthier Choices Thanks to This Surprising $20 Purchase

In college, I had a distant crush on a mysterious, handsome guy I’d see walking around campus. He always wore a white t-shirt, and he carried one of those nondescript, gallon-sized plastic water jugs everywhere — the kind you buy at the supermarket. I’d never seen anyone do that before, and for some reason, I was absolutely mesmerized by him. What can I say, I was 20 years old, and the heart wants what it wants. We never wound up meeting (I never even learned his name!) but all these years later, I’ve suddenly been reminded of him again thanks to the massive, ongoing trend for equally giant-sized water bottles.

Apparently, this guy was ahead of his time: these days, huge colorful water bottles are everywhere, from TikTok to Instagram, in the hands of lifestyle influencers, gym bros, and even girls who are trying to bring back the VSCO style. And the bigger, the better, it seems.

Adequate hydration is critical for all of our body’s systems, but research shows it especially impacts our skin health, neurological function, and gastrointestinal health. If there’s one thing that most doctors and nutritionists can agree on, it’s that drinking more water throughout the day is generally a pretty good idea.

“As long as we’re not over hydrating and hijacking our electrolyte balance, drinking more water is better than drinking not enough,” says J. Sunny Fisher, Ph.D. “It’s important to remember that water plays a critical factor in so many things related to health — our cells are made of more than 70% water, so is our brain, and it plays an important role in flexibility, keeping our joints lubricated, and flushing our bodies of toxins.”

Although I knew it was super important to drink more water than I had been, I simply could not get myself to do it. I knew something needed to change.

I found a water bottle that transformed my drinking habits.

I used to have a cabinet positively overflowing with products that were supposed to encourage me to drink more water throughout the day. They didn’t work.

I tested out sugar-free, flavored water packets, several greens powders, and a rainbow of thermos options. I thought they might help, but to be honest, they never really did. I’d test something new out for a day or two, but ultimately, I decided I didn’t like it, so back on the shelf it would go.

Then came the wave of gigantic, oversized bottles labeled with corny motivational catchphrases. You know the ones: they’re festooned with that overly cute font usually reserved for “Live Laugh Love” signs, but instead, these say stuff like “You’ve Got It!” and “Halfway There!” down the side, corresponding with hours of the day. The final one, which is supposed to hit at 8 p.m., commences with “You Made It!”

If this seems silly to you, that’s because you’re right. But it also works. One day, on an absolute whim, I randomly purchased one of these bottles from Amazon. I wasn’t expecting much from my 64 oz. HydroMATE water bottle, but I’m going to be real with you: this innocuous little online purchase changed everything for me. 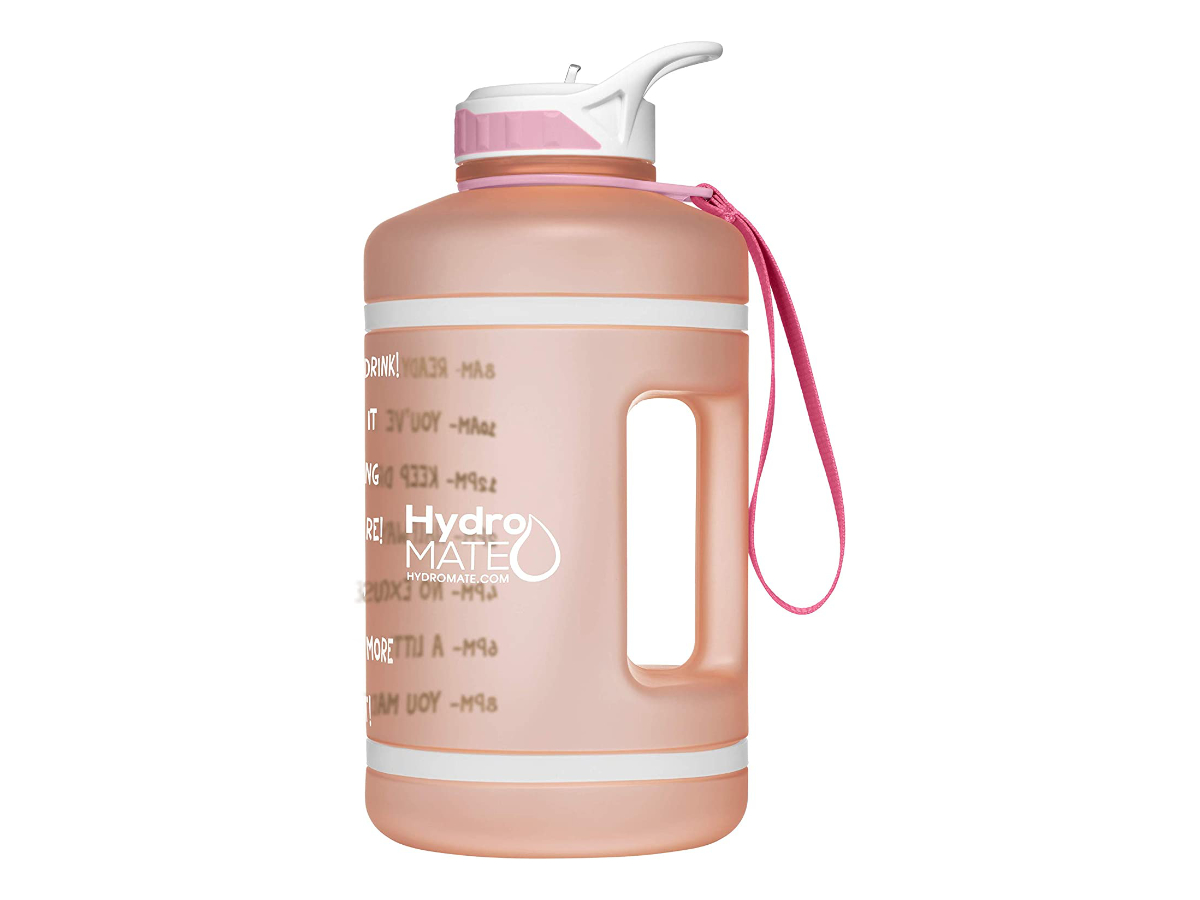 It might sound ridiculous, but this water bottle transformed my hydration habits almost overnight. The first morning, I decided to work the bottle right into my routine. So after brewing my morning coffee, I filled it up to just above the 8 am line, then brought the bottle along as my companion through the day. Initially, I rolled my eyes at all the affirming phrases (they’re so clichéd!) but eventually, they’re like buoys I sail by, each one a marker to hit my goals.

The water bottle held me accountable to keep up with my goals.

Getting to measure my progress made me really want to keep going until I fully completed the task. It also helped me achieve this healthy habit faster than I’d imagined. I never remembered to drink enough water throughout the course of a whole week. Now, I’m barely even trying — and I’m doing it every day.

So what’s going on here, psychologically? According to Fisher, who specializes in applied positive psychology, there’s a simple reason why this water bottle style has been so successful for me and others. It starts where you might least expect: those positive, affirming phrases. While they might feel kinda cheesy at the start, they actually are really encouraging.

“These phrases provide an intrinsic motivational value because it feels good to actualize our potential — in whatever way, form, or shape,” Fisher says.

The positive reinforcement was an integral part of the design, not to mention the fact that carrying around your entire day’s worth of water turns an everyday chore into a more fun, game-like experience. Gamification has consistently been shown to help people make healthier choices overall, and while drinking through a bottle of water isn’t exactly a complex game, it still adds that extra edge — like trying to hit your goal on a Fitbit.

My HydroMATE water bottle gave me something else that was frankly invaluable: in a time when so much is out of our hands, drinking my way through this large water bottle on a daily basis allowed me a small sense of control over my life. A feeling that has now become as coveted as that morning cup of coffee.

I’m actually motivated to refill the bottle every morning when I wake up.

Fisher approves of this method wholeheartedly: “This is a proactive strategy, as opposed to the reactive strategy of drinking water when you start feeling sluggish,” she says.

It’s a stitch-in-time approach: by drinking a bunch now, you’re getting ahead of the dehydration rather than trying to play catch-up when you’re feeling thirsty, which is definitely a better path forward. It took me so long to change my hydration habits, but I hadn’t realized how powerful the feeling of accomplishment could be — and sometimes, we all need a little assistance to get there.

Read next: Here’s How to Stay Hydrated (Without Guzzling Tons of Water)