We Ate a Lot of Frozen Pizza — and Found the Healthiest, Tastiest Ones

Fast, cheap, comforting — frozen pizza has all of that in spades. One thing it doesn’t usually have? High nutritional value. Let’s face it, if we’re turning to frozen pizza, we’re not exactly on a mission to eat the most nutrient-dense meal. Even so, some pizzas are more healthful than others, so why not choose one that’s actually pretty good for you?

“Not all frozen pizzas are created equal,” says Carly Knowles, a registered dietician based in Portland, Ore. An avid cook (her new cookbook The Nutritionist’s Kitchen comes out in December) and working mom, she’s no stranger to frozen pizza. “When I’m looking for one for myself, or making recommendations to patients, I try to encourage them to find something that’s more than cheese and bread. Although that’s admittedly delicious and there is some nutritional value, there’s a chance to get a lot more.”

Here’s what she says to look for when picking out a good-for-you frozen pizza:

1. Load up on vegetables. First and foremost, Knowles says, find a pizza with lots of vegetables. “And don’t be afraid of adding a big handful of arugula or spinach on the top like the fancy restaurants do.”

2. Choose a veggie or whole grain crust. A veggie crust (usually cauliflower) will offer added fiber and nutrients, and usually a hit of protein too, since they’re often made with chickpea flour. But if that won’t satisfy your craving for a fluffy bread-y crust, opt for one that’s made with whole grains. “Anytime you see the words ‘whole grain’ that means it’s coming along with more fiber.”

3. Watch our for sodium, saturated fat, and sugar. “In a nutshell, sodium, saturated fat, and sugar are the pitfalls to look out for,” says Knowles. Fairly high sodium levels are inevitable with frozen prepared foods, since salt is a preservative as well as a flavor enhancer. And there will always be some saturated fat as long as there’s cheese. But if you skip the cured meats and sausages, you can keep sodium and saturated fat from going off the charts. As for added sugar, “there’s sometimes more sugar than you’d expect,” says Knowles. “It’s often in the sauce, but sometimes in the crust as well.”

4. Be wary of additives. While you’re checking out that nutrition label, take a peek at the ingredients list. If you find a laundry list of additives with hard-to-pronounce names — usually preservatives and dough conditioners — you might want to take a pass. “For some of these, we don’t know what their effects on the body are, and some we do know and they’re not good,” says Knowles.

And the Winners Are… The Healthiest, Tastiest Frozen Pizza

We took this advice to several grocery stores and rounded up the healthiest frozen pizzas we could find. We narrowed our selections to pizzas with cauliflower or whole grain crusts, each topped with vegetables and no meat. Then, we zeroed in on those that offered the most dietary fiber and protein, had reasonable amounts of sodium, low saturated fat, and less than 1 gram of added sugar.

Our contenders chosen, we put them to a taste test. Which pizzas had us going back for more? Ultimately, there were two clear winners in two distinct categories: cauliflower crust pizzas and whole-grain crust pizzas. 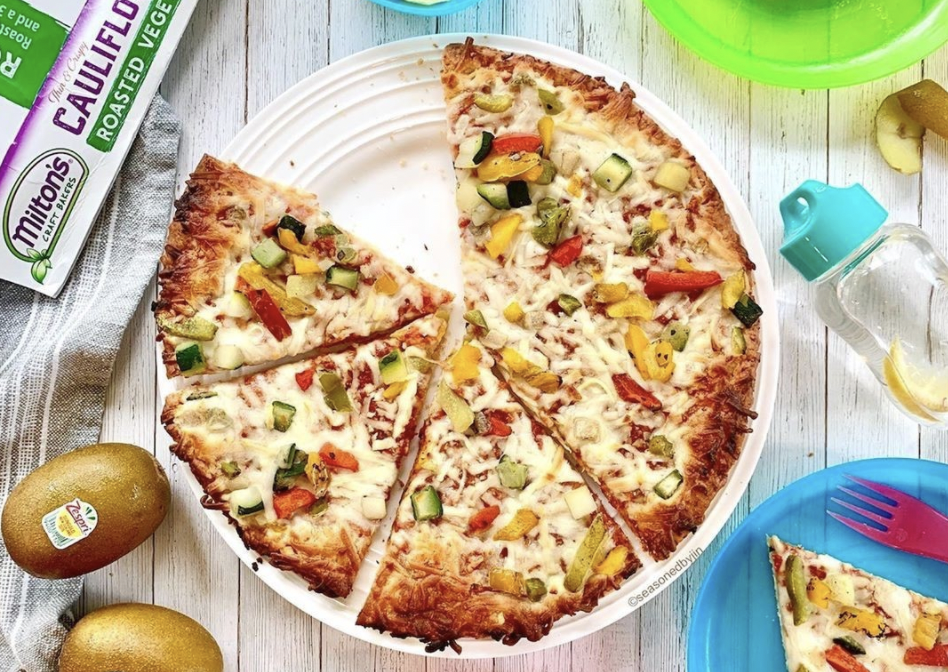 There are lots of brands vying for shelf-space in this category, but after tasting through them all, Milton’s (available at Costco) came out on top for its thin and crispy crust that actually tasted like pizza — not a bowl of steamed cauliflower. The tomato sauce, roasted peppers and zucchini had a bright freshness we loved, and the blend of three cheeses added richness and a proper all-important cheese pull.

In the whole-grain crust category, we fell for this deliciously-fluffy vegan pie from Sweet Earth Foods. It’s loaded with vegetables, including antioxidant-rich crucifers like broccoli and Brussels sprouts. You’d never know the mozzarella was vegan. It’s also quite low in sodium for a frozen pizza, and has no cholesterol too.