Are You Buying the Best Almond Milk for You? 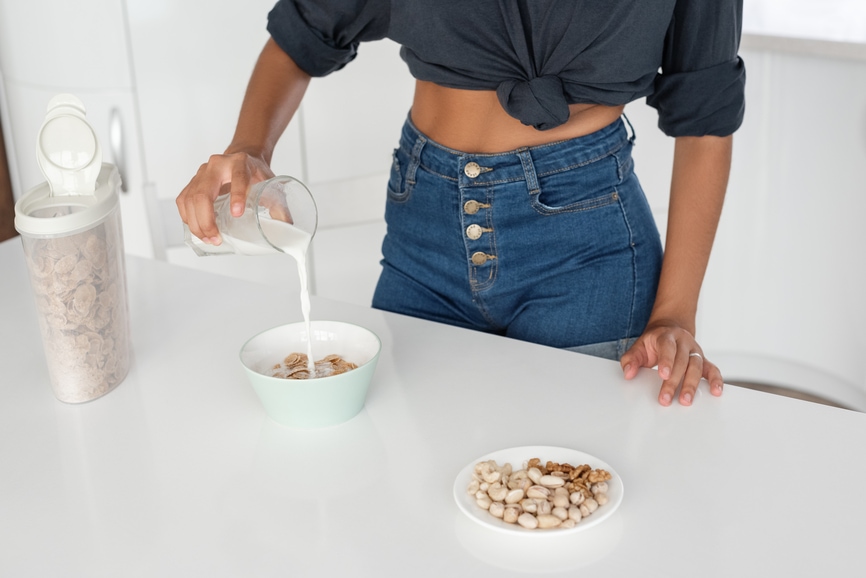 If you’ve stared down the row upon row of almond milk options out there and been completely overwhelmed, know that I am right there with you. You see, I’ve recently been trying to cut back on dairy and decided it was time to finally give almond milk a try. My first visit to the alt milk section was no less than daunting. How could there be so many choices for one product? Which one was the best almond milk for me?

Trying to understand the labels was like trying to read a different language — and I knew I couldn’t be the only one who felt this way — so I brushed up on some of the common terminology.

Here’s what to know:

Added sweeteners are often the second ingredient (after water and before almonds), with anywhere from 7 to 13 grams of sugar per cup. Unsweetened almond milk, on the other hand, typically contains 0 grams. The takeaway? If you’re being mindful of your sugar consumption, unsweetened is your best choice.

Almond milk naturally separates. To counteract this, the majority of brands add various stabilizers and emulsifiers to their product. One stabilizer, carrageenan, is derived from seaweed and has been linked to inflammation and gastrointestinal issues. It’s best to avoid it, though many brands have removed it and clearly state so on the label.

Gellan and locust bean gums are other common additives, as well as sunflower lecithin. So far there is less-than-comprehensive data available about them. Until there is, be aware, read the label, and decide for yourself if consuming them is healthy for you.

While whole almonds are a good source of calcium, magnesium, and vitamin E, almond milk is not. That’s because  the pulp of the almonds is removed in order to create a smooth product — meaning most of the nutrients in almonds are also removed. Many brands fortify their milks with calcium and vitamin E, along with vitamin D and A, both are which are commonly found in cow’s milk. If you’re looking to get more vitamins and minerals, look for the fortified stuff.

This is a much less common term, but it’s beginning to pop up on a few brands. Cold-pressed means what it sounds like: The milk is extracted without the use of high heat in order to better retain nutrients, flavor, and freshness. Basically it’s a less-processed almond milk.

It’s also likely how you’d make almond milk at home: The nuts are soaked in water, blended with the water, then pressed and strained.