“Unless you were raised by macrobiotic hippies, you’ve had it. I’ve had it. And there’s no shame in saying it—we’ve all had macaroni and cheese out of the box.” So says Miyoko Schinner in her book, The Homemade Vegan Pantry: The Art of Making Your Own Staples, which includes an impossibly “cheesy” vegan cheese sauce — in shelf-stable form.

But her book is more than just one recipe. Schinner offers a rock-solid foundation of staples for your kitchen that promise tons of flavor; Schinner is all about enticing people to a plant-based diet not through ideology, but through taste.

Her recipes will save you money and time. Consider, for example, that half-gallon of soy milk that runs around $4 at the store. To make the same amount of soy milk at home it only takes a handful of soybeans and some water. And, by making it at home, you’re eliminating the environmental impact of packaging, shipping and storage. Need more proof? There’s homemade vanilla extract that makes use of leftover vodka.

But About That Vegan Cheese Sauce

When it comes to vegan cheese sauce, her genius recipe is as simple as blitzing a few ingredients together in the food processor to make a vegan cheese powder. Stick the gloriously cheesy-tasting powder in your pantry and you’re set to combat five weeknight dinner panics in convenient succession.

When you’re ready to use the cheese mix, cook 1 cup of dry macaroni (we like brown rice elbows like Tinkyada) according to package instructions and drain. Whisk together 1/3 cup mix with 1 cup water or unsweetened nondairy milk in a saucepan over medium-low heat. Simmer, then toss with hot cooked macaroni noodles. 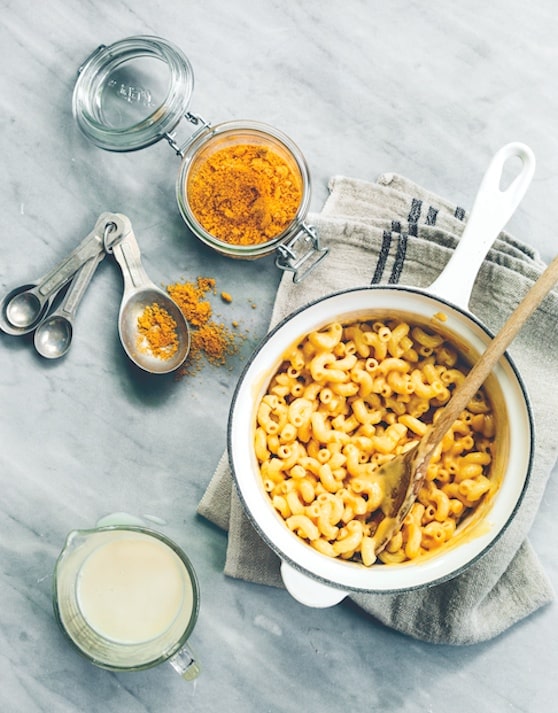