My dad’s family is Ukrainian, so I’ve been thinking about my grandmother a lot over the past couple weeks. My grandma and I were very close, and one of the reasons I loved her so much was that she wasn’t exactly a stereotypical grandma  — you’d be much more likely to catch her modeling a terribly fashionable outfit at the Copacabana than cooking varenyky at home. She was beautiful, she was glamorous, she drank Jack Daniel’s on the rocks with a twist, and she was not what you would call domestic in any way, shape, or form. However, she also gave me my first knish, and since I immediately adored them, she always had them ready for me when I visited. She later introduced me to other traditional aspects of Ukrainian Jewish cuisine, which connects me to my family’s culture to this day.

Whether you’re looking for a way to feel a sense of connection with your heritage or you’re just feeling at a loss right now and want to do something with your hands, making a traditional Ukrainian recipe — or a modern, healthy play on a classic Ukrainian dish — might be a good way forward. And if you’re able, consider donating to an organization like Sunflower of Peace, a nonprofit dedicated to providing Ukrainians with first-aid medical backpacks. 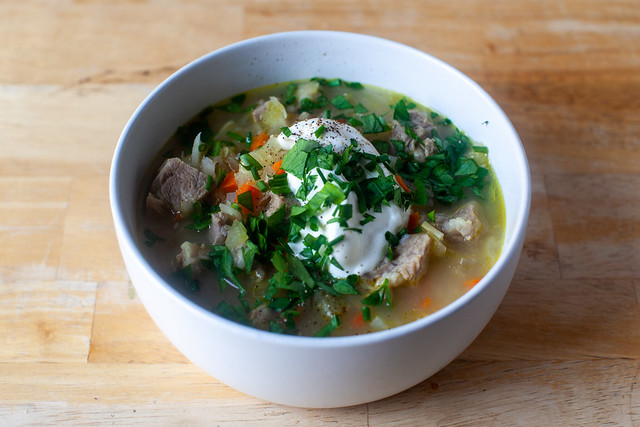 Veselka is an iconic Ukrainian restaurant in New York’s Ukrainian Village neighborhood, and one of their best dishes, in my opinion, is their cabbage soup. Cabbage is one of those ingredients that doesn’t get enough love in American cuisine, and this richly flavored soup is capable of making people who are cabbage-wary fall in love with this incredibly healthful ingredient. Cruciferous vegetables like cabbage have been shown in studies to help reduce chronic inflammation and keep your heart healthy. 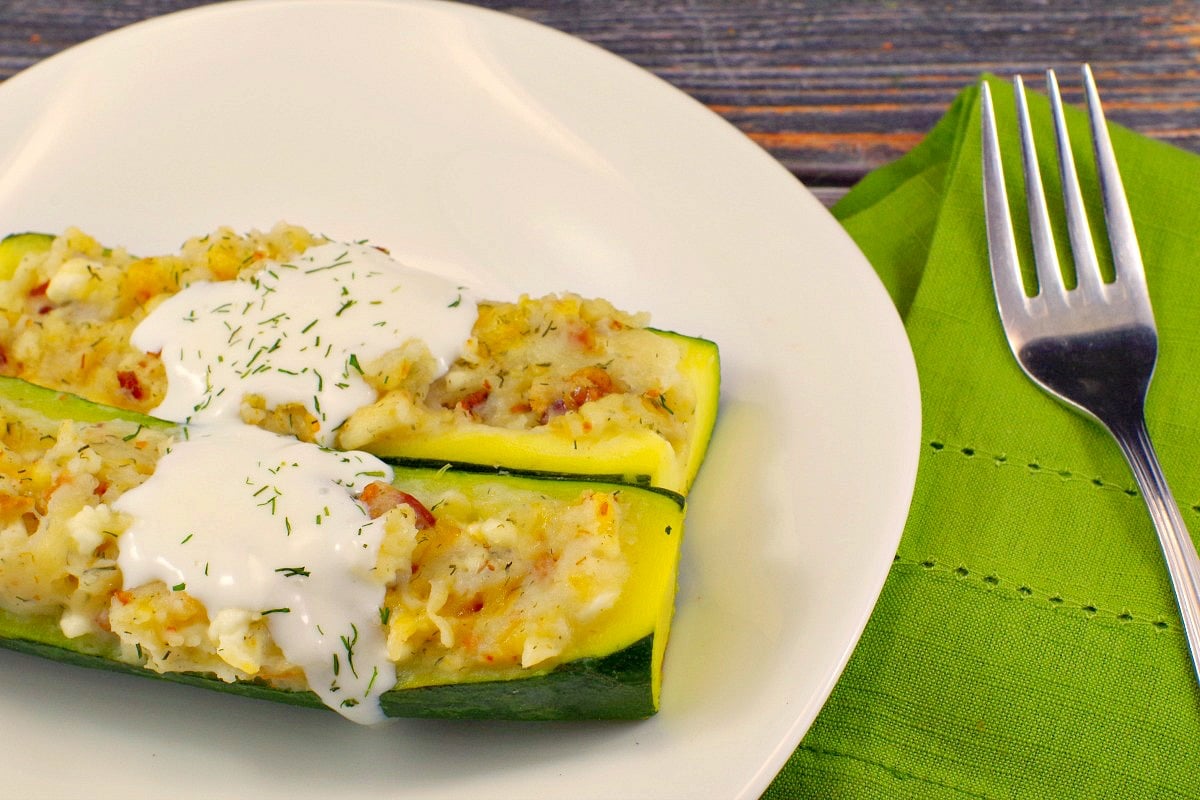 As Ukrainian recipe author Terri puts it, “I honestly can’t ever remember a meal at Baba’s that didn’t include perogies. And that’s okay when you’re a kid, but as a health conscious adult, pierogies at every meal isn’t exactly the healthiest of choices.” That’s why I adore her creative, smart play on the flavors she loved as a child: Pierogi zucchini boats. By replacing the pierogi dough with a zucchini, you’re removing all the refined grains and adding in plenty of vitamin A and healthy fiber. The Pierogi filling remains largely unchanged  — although we’d recommend making these simple Greek yogurt mashed potatoes rather than using instant. 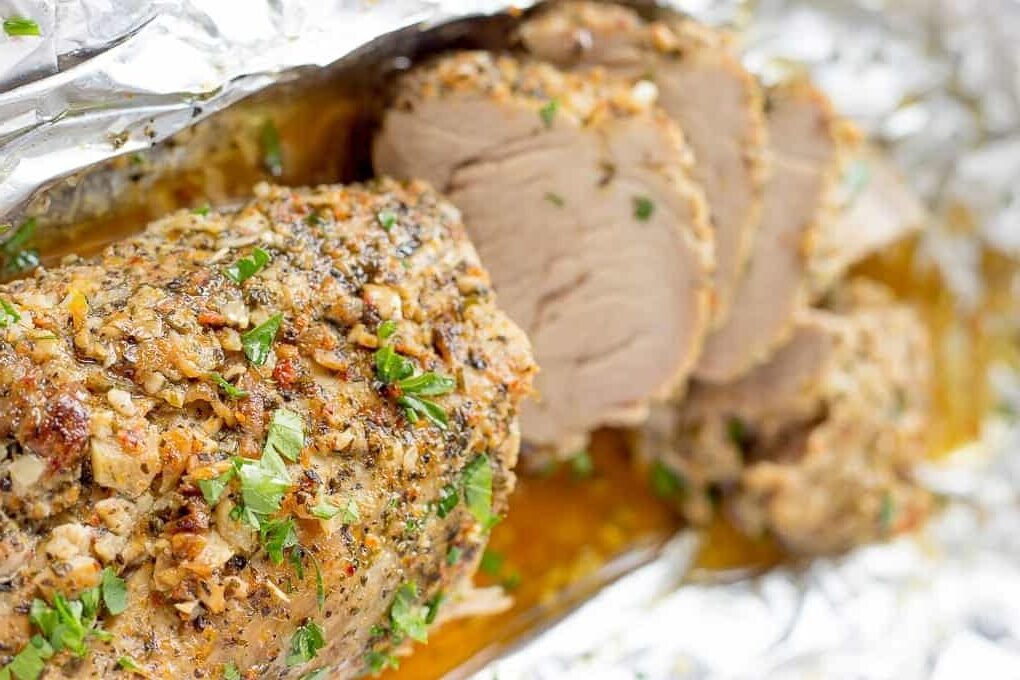 For obvious reasons, this recipe doesn’t exactly connect with my Ukrainian Jewish heritage, but as a merely Jewish-ish person who totally eats pork, I’m a big fan of roasted pork tenderloin. This recipe is so simple, made with just a handful of ingredients, and it’s incredibly hands-off: a great weeknight dinner recipe if you can do five minutes of prep work the night before. Pork gets a bad rap for being an unhealthy meat, but the truth is, pork tenderloin is as lean as chicken breast, and the American Heart Association gives it a “heart check” mark, which indicates it as a heart-healthy protein. 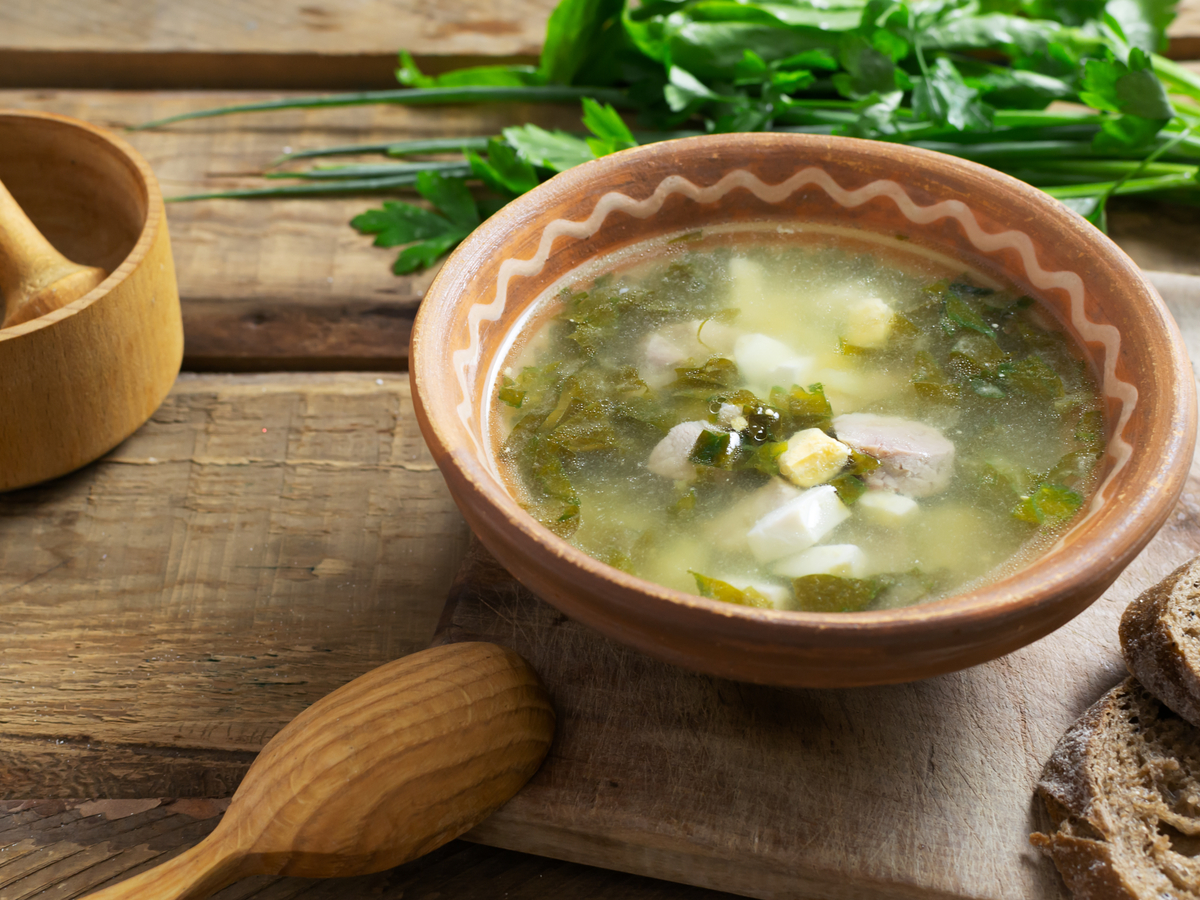 Chances are high that you’ve heard of Traditional Ukrainian Borscht, which relies on beets to give it that iconic, bright red color and subtle, earthy flavor, but unless you’re very familiar with the cuisine, you probably don’t know about Ukrainian Green Borscht. This is a delicious, healthy soup that’s packed with tons of spinach and herbs. It’s traditionally made with sorrel, but as the recipe author notes, that can be hard to find in American grocery stores, which is why she replaces its tart flavor with lemon juice. If you can track down some sorrel, this soup will taste more authentic, but the lemon juice definitely helps create a balanced dish. And if you prefer a plant-based version, check out this Vegan Green Borscht. 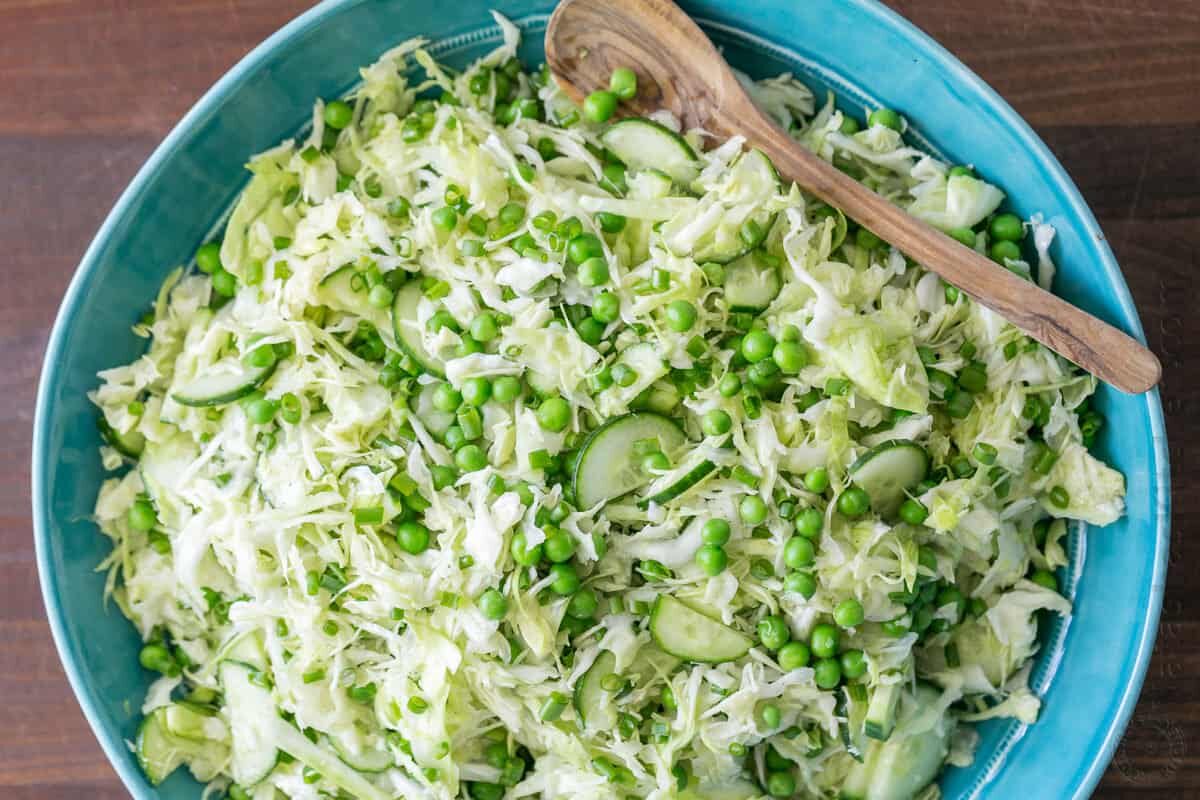 This cabbage and pea salad is easy, delicious, and healthful — like a vinegar-forward, mayo-free coleslaw. I love the sweet pop of peas against the crisp bitterness of the cabbage and brightness of the apple cider vinegar. You can make this recipe without a mandoline, but it’s way, way easier and faster with one. I’ve recommended this $10 mandoline before because it’s economical and comes with a cut-resistant glove — and this kind of glove is 100% necessary if you’re going to be messing around with a mandoline. 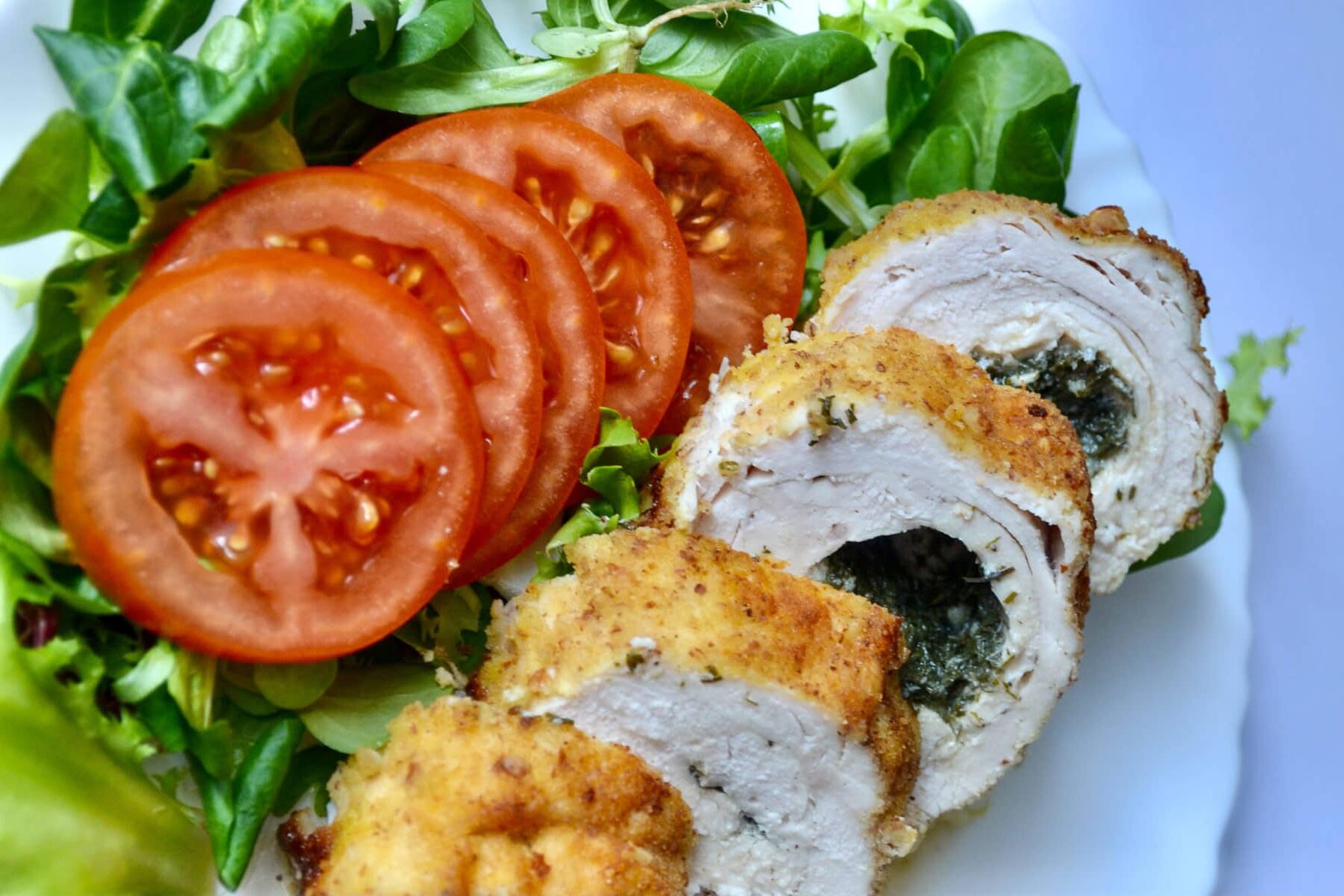 This is not even remotely a traditional version of Chicken Kyiv, but it is a really smart way of going about making this classic dish if you’re following a keto diet or just want to limit your carbs. If you want to skip the frying step, feel free to jump straight to baking, and if you want more crunch, you can easily mix “keto bread crumbs,” aka crumbled-up pork rinds, into your almond flour mixture. (And yes, you should spell the city — and dish — K-y-i-v, because that’s the spelling derived from the Ukrainian language.)

7. Leek Salad with Apples and Carrots 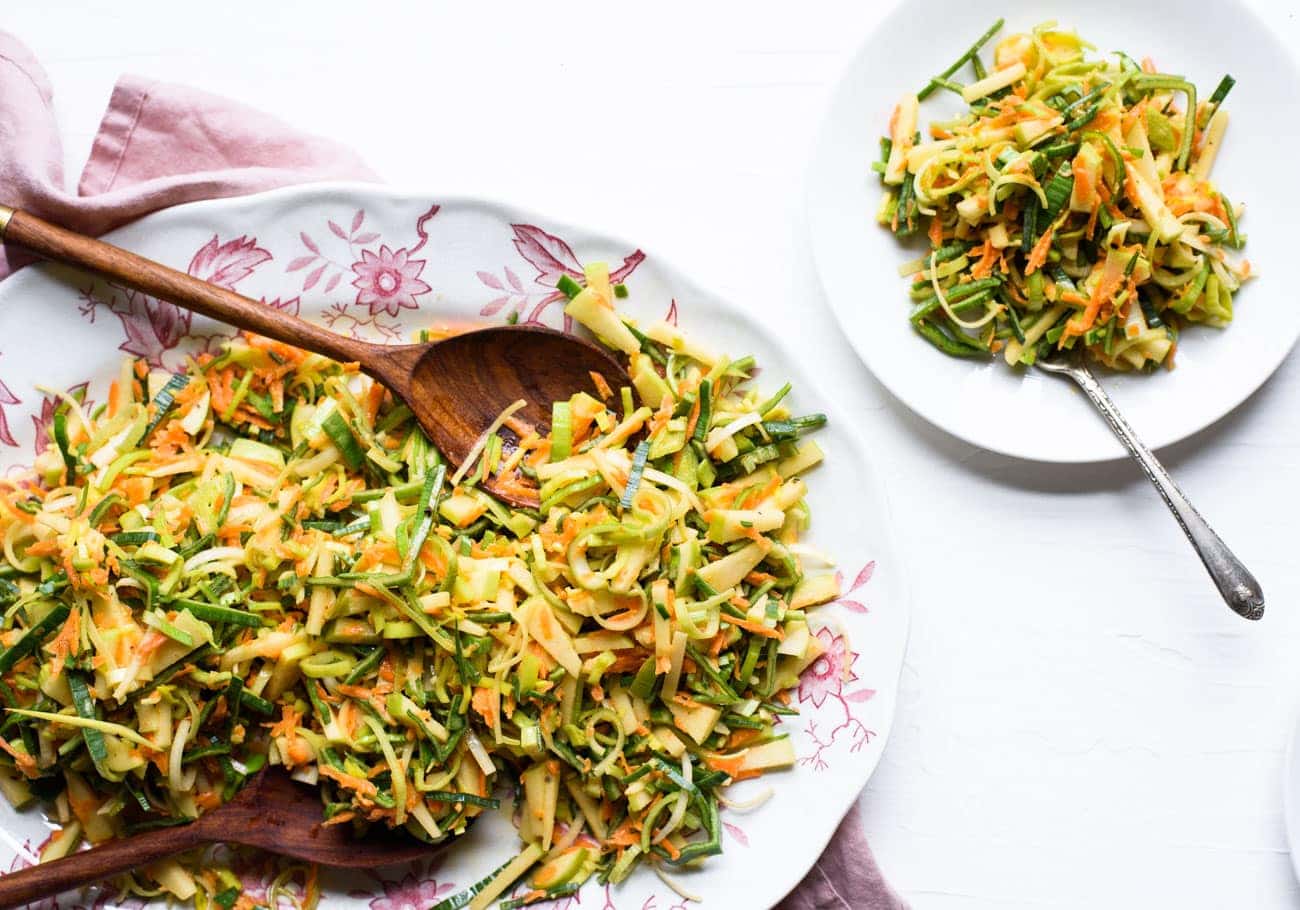 I’ll be the first and (probably only) person to say it: Leeks are the mussels of the vegetable world. I know that statement is moderately insane, so please bear with me. What I mean is that like mussels, leeks are absolutely delicious, but they’re so incredibly annoying to clean, it often doesn’t really feel worth the hassle to prepare them. However, if you can put up with the multi-step process you need to go through in order to remove their grit — which the recipe author, Alex, helpfully outlines here in her delicious leek salad recipe — they’re really worth it. Kaempferol-rich foods like leeks are associated with lowered risk of heart attacks, and they’re full of the healthy, prebiotic fiber that keeps your gut flora happy. 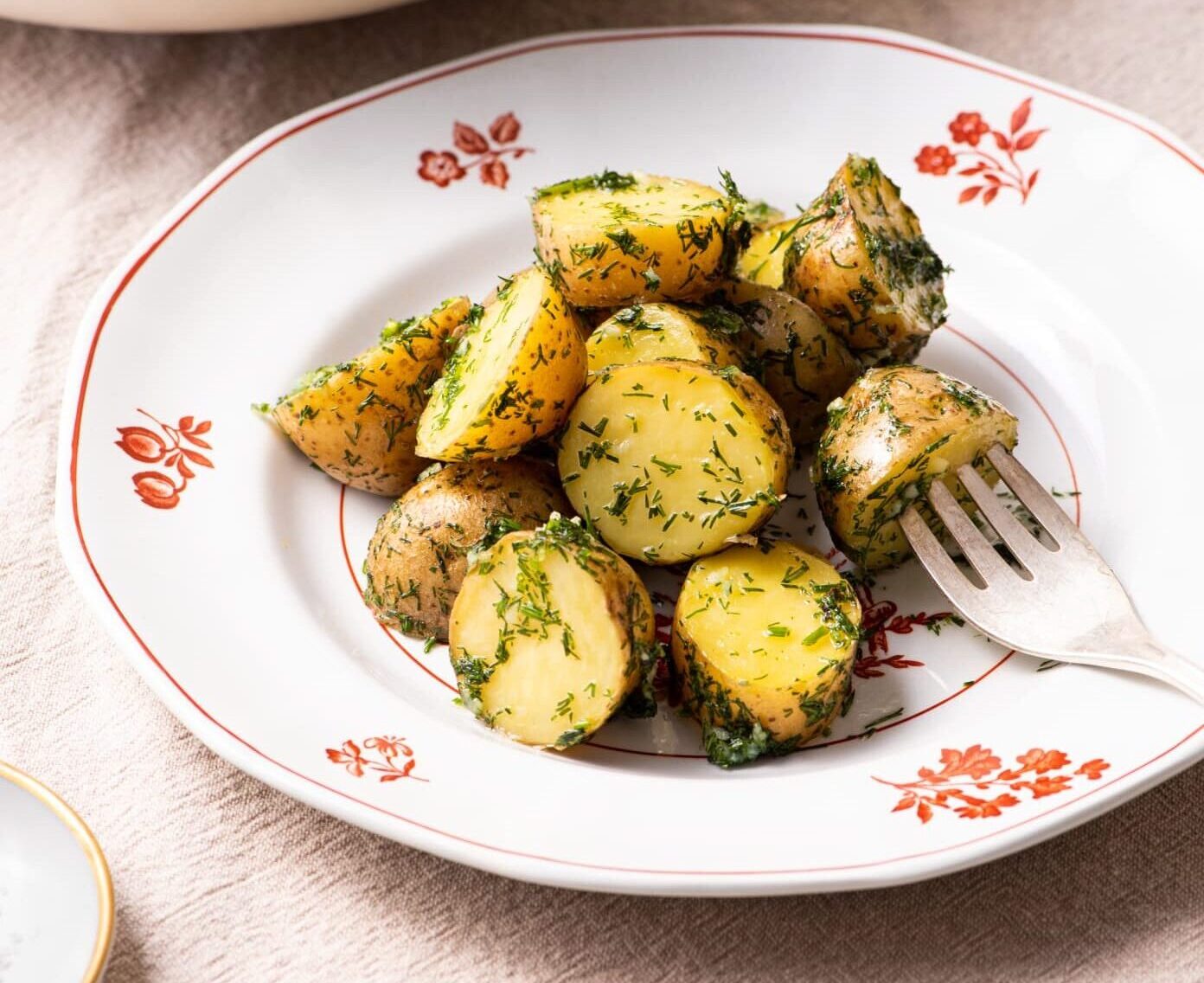 This traditional springtime dish requires just four ingredients — potatoes, dill, garlic, and sunflower oil — but it is far more than the sum of its parts. While you might be tempted to swap out the sunflower oil for another neutral oil, I’d recommend sticking with sunflower for this one: Sunflowers are the national flower of Ukraine, and the lightly nutty flavor and buttery finish of sunflower are important to the flavor and texture of this dish. For the healthiest sunflower oils, look for high oleic varieties — specifically, look for those that are 80% or more oleic acid. Studies have shown that high oleic sunflower oil may raise HDL (aka good cholesterol) and lower LDL (bad cholesterol), which may help reduce your risk of heart disease. 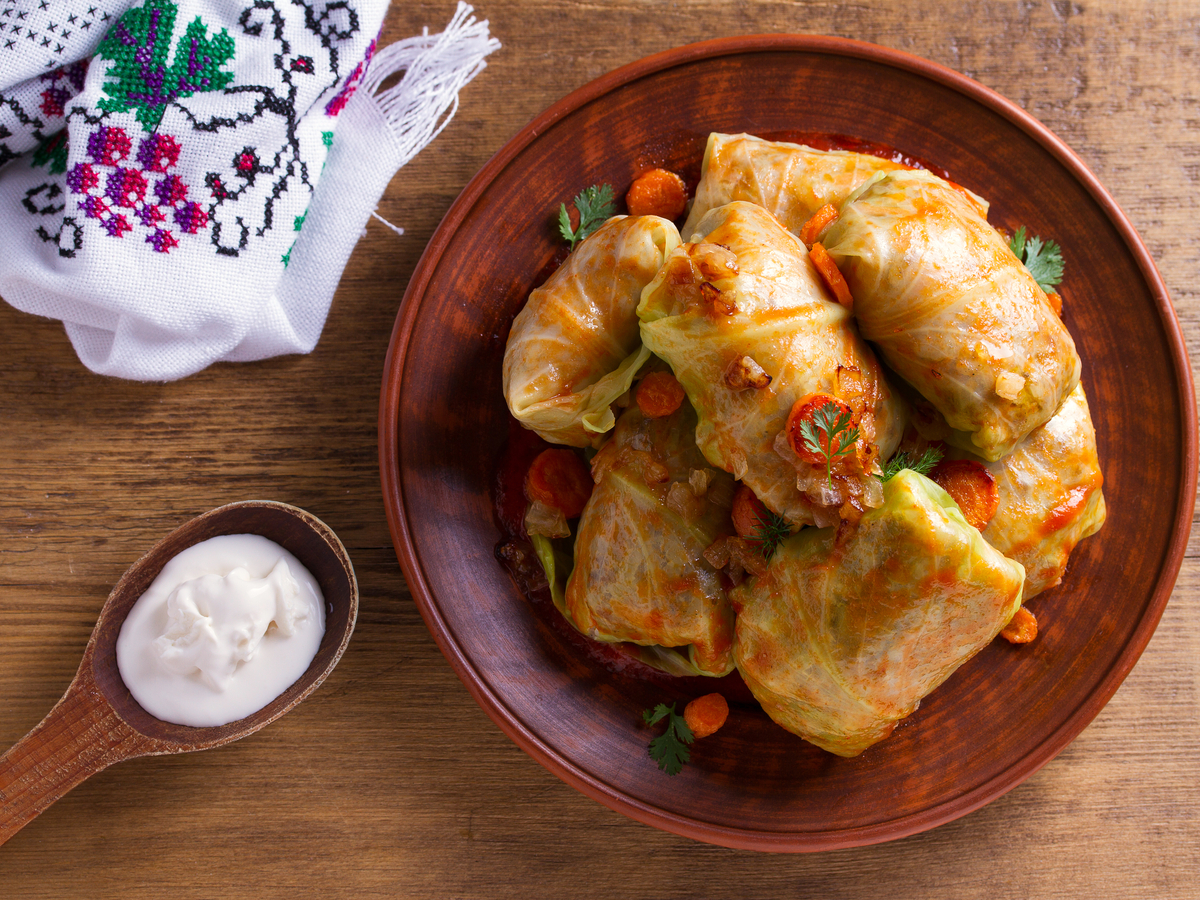 This is one of those keto recipes that’s honestly very true to the original — stuffed cabbage is, by its nature, going to be pretty keto-friendly, after all. By simply subbing out cauliflower rice for white rice, this stuffed cabbage recipe cuts out refined grains while increasing its phytonutrients and antioxidants, so that’s a win/win. If you want to make this dish vegan, you can simply swap out the ground meat for a vegan alternative, as well. 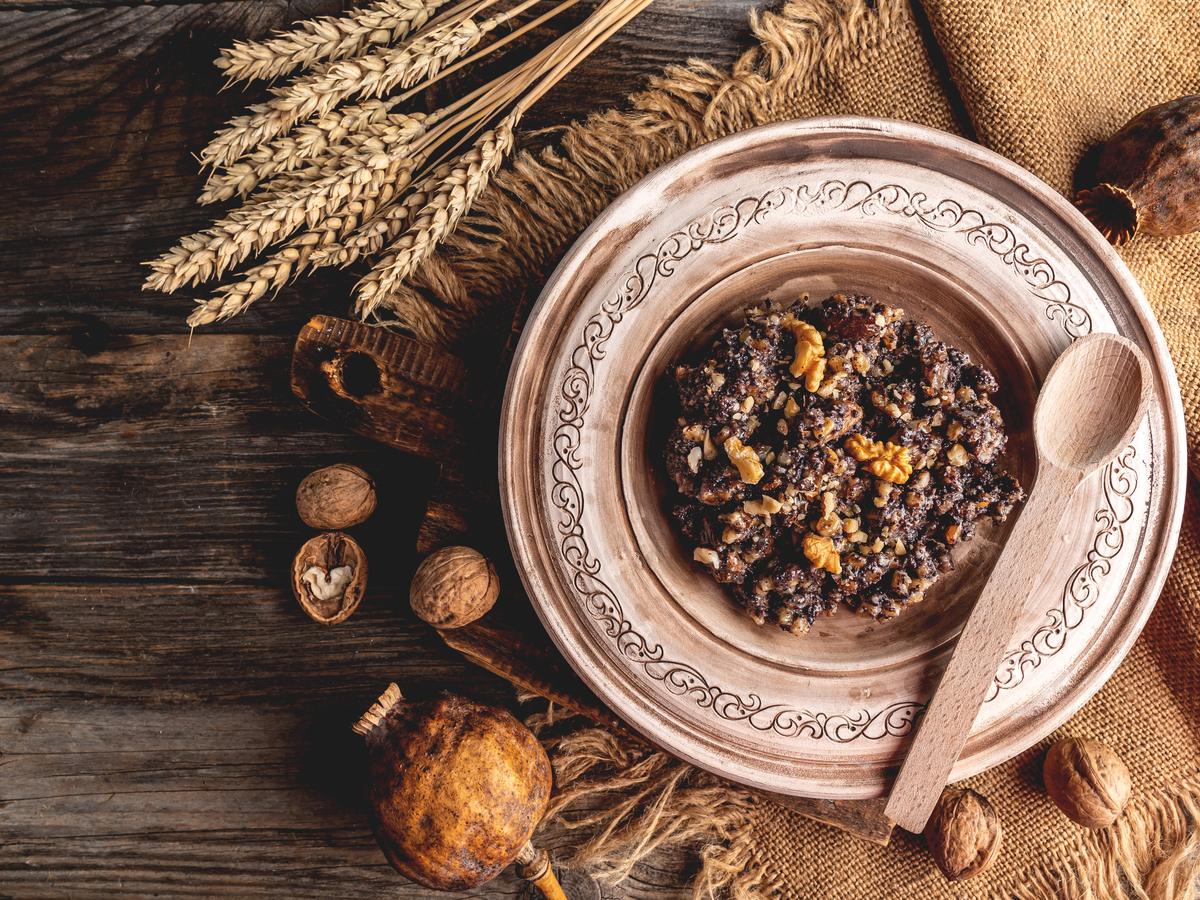 A traditional Ukrainian Christmas treat, Kutia is akin to rice pudding, but it’s made with wheat berries, which are minimally processed — since the wheat kernel remains intact, virtually none of the nutrients are stripped away, making them a pretty healthy grain filled with protein, fiber, and iron. As the recipe author Vera notes, this recipe doesn’t just have to be for the holidays, either: It can also be a healthy breakfast option similar to an overnight oat, and you should feel free to play with and adjust the mix-ins as you see fit. If you’re not super into raisins, you can swap them out with chopped dried apricots, cherries, or another dried fruit, and the walnuts can be easily replaced with pecans or hazelnuts — or for a nut-free option, sunflower seeds.

Jess Novak is the Head of Content and Audience Development for Clean Plates. She loves making meals that taste like they’re not healthy but secretly really are. You can follow her on Instagram @jtothenovak.