Whether they’re eaten raw or cooked, vegetables are some of the healthiest foods around, but a new study shows that raw vegetable consumption actually helps increase life expectancy. Surprisingly, cooked vegetables don’t have the same results.

The study focused on cardiovascular disease, and it tracked older participants for more than a decade. It found that those who consumed raw vegetables regularly were less likely to have cardiovascular disease, and also less likely to die from it. Cooked vegetables are still helpful in preventing some ailments, such as high blood pressure, but in the case of CVD, raw reigned supreme.

Read next: 10 Vegan Recipes That Support Your Plant-Based Whole30

There’s good reason that raw vegetables may be more beneficial for certain conditions: in their uncooked state, they haven’t yet lost any nutrients. While cooking is important for the bioavailability and concentration of some nutrients, such as lycopene in tomatoes, for most vegetables you’ll get the highest amount of nutrition from them in their raw state.

But this doesn’t mean you’re stuck in a carousel of endless salads. Instead, we’ve rounded up a variety of fun, flavorful raw vegetable recipes to help you pack more vegetables into your diet — without sacrificing flavor.

Spiralized zucchini, AKA zoodles, has been popular for some time. But carrots are starchier, so they make a slightly closer replacement for pasta, as in this raw carrot pasta with ginger-lime sauce. You can use peanut or almond butter for the sauce, so whether you want the comforting nature of PB or the satiation of almond, this recipe is for you. With liquid aminos, fresh ginger, lime, and garlic for plenty of kick, this “pasta” is a tasty way to eat your vegetables. 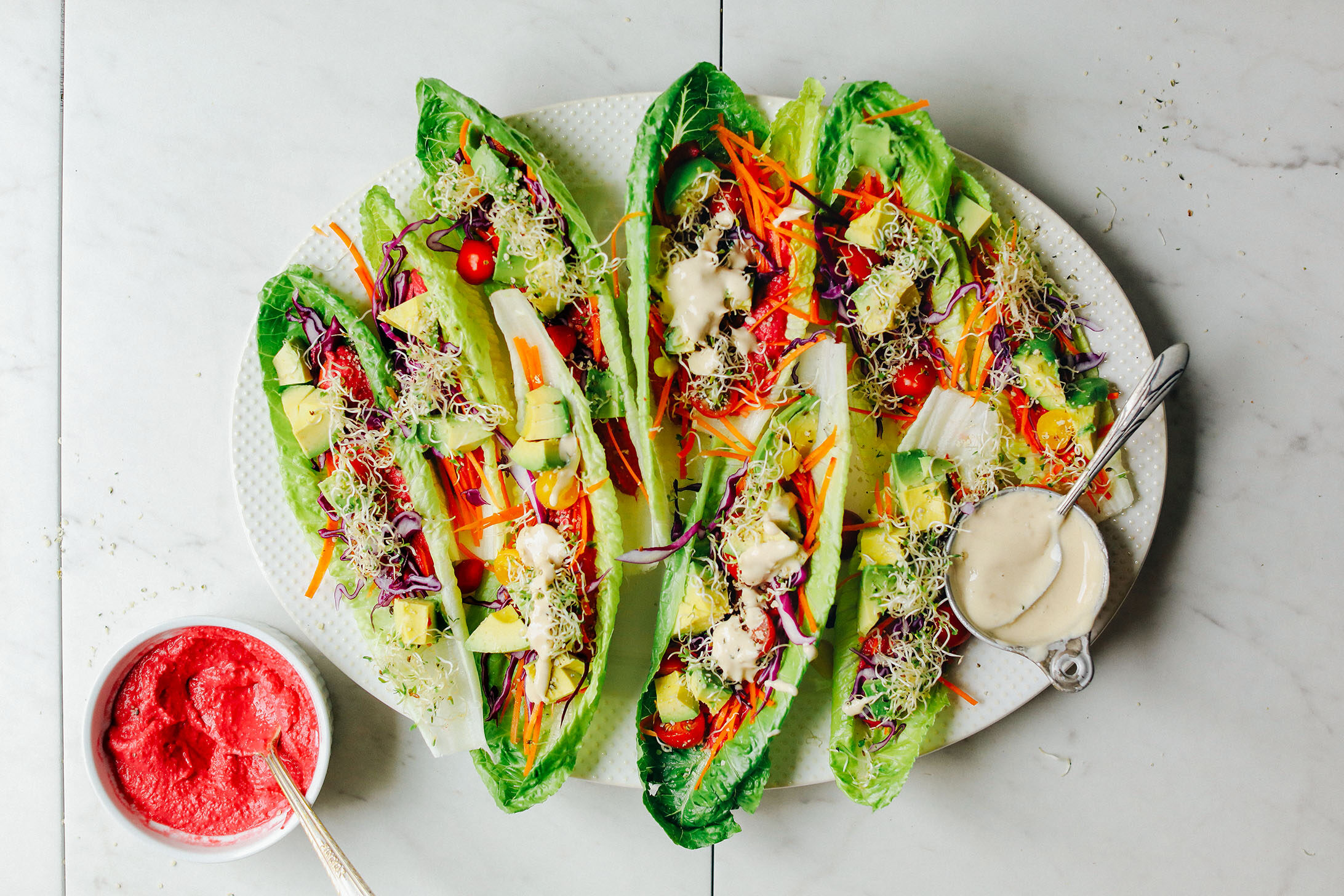 You can keep things completely raw in these rainbow raw-maine taco boats by using a sprouted hummus, but you’ll still get plenty of raw veg goodness even if you choose a conventional version. Lettuce leaves create the “boat,” and you’ll fill them with a hearty combo that includes alfalfa sprouts, carrots, avocado, and hemp seeds. With a sauce flavored by tahini and lemon, they won’t have anything like a Mexican-inspired flavor, but they will be tangy and bright. Tahini, which is made by grinding sesame seeds, is full of powerful antioxidants. Zoodles get new life, and quickly, in this ten minute raw vegan curry. We love how filling the curry base is, which includes lots of cashews and some coconut water. Having a heavier topping for a spiralized zucchini dish is an excellent way to make it more satiating, and it allows you to eat entire cups of raw zucchini without even thinking about it. Full of curry powder, chili paste, and cayenne, this raw dish is bound to spice things up for your meal.

Sushi is a pretty healthy food, but the health factor gets multiplied when you swap out white rice for raw riced cauliflower. And while once upon a time you had no choice but to rice your own, as is suggested in this vegan cauliflower rice sushi, you can opt for the pre-riced version, which removes a time-consuming step. Paired with a filling of scallions, bell peppers, and sunflower sprouts, these little rolls are pretty much all raw vegetables. We love that the sauce employs two dates, which is a whole food way to impart some balancing sweetness. 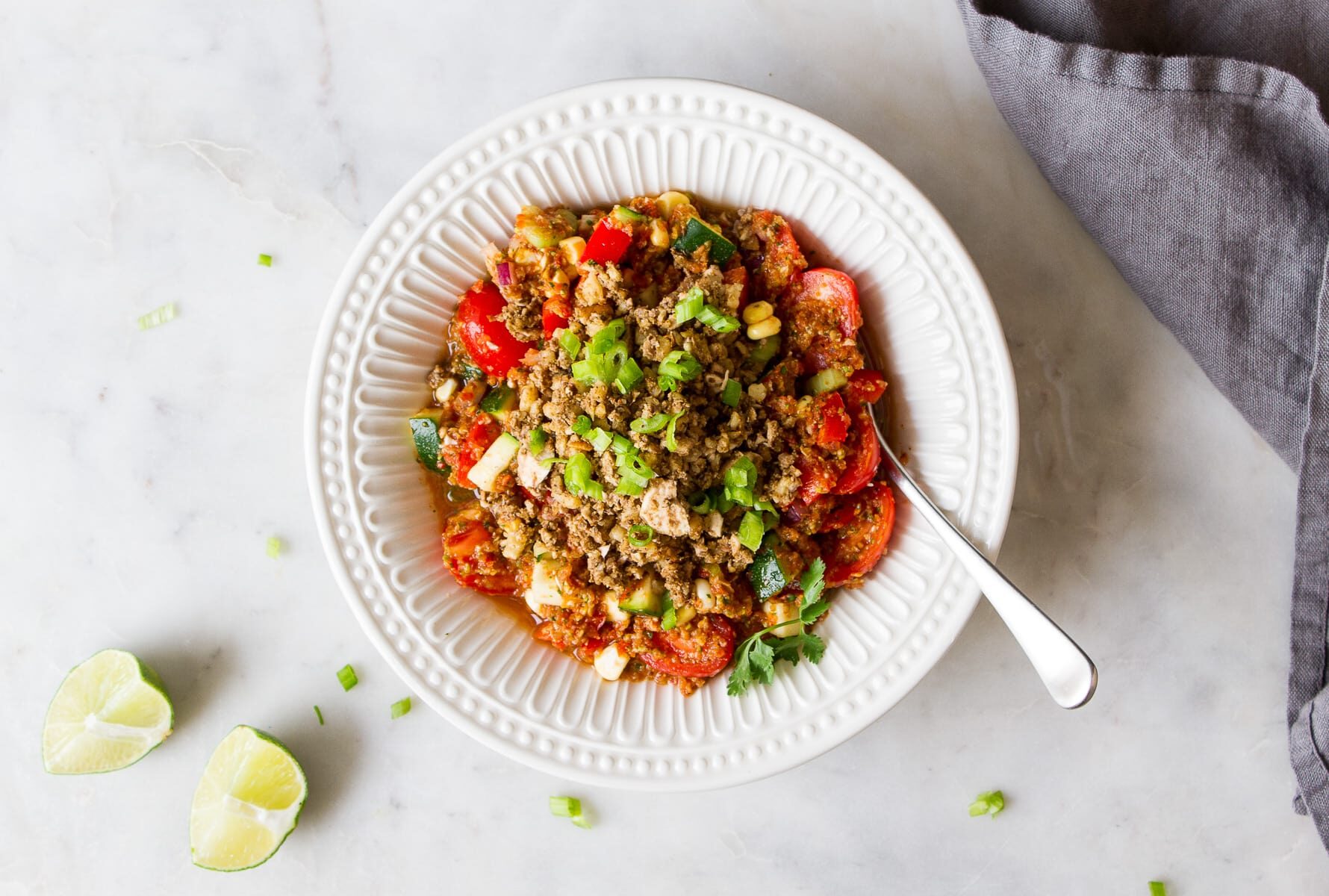 Of all the raw vegetable dishes you could think of, raw veggie chili is possibly the most unlikely to be on the list. But keep an open mind: it’s a great way to pack multiple cups of raw vegetables into your meal. There’s even a raw vegan “meat” made with mushrooms and walnuts, which will give the chili a richer, meaty quality that vegetables alone couldn’t. To get a chili-like texture, you’ll blend the incredibly healthful raw vegetable base that includes tomatoes, bell peppers, celery, onion, corn, and zucchini. Then you’ll add the mushroom-walnut meat, which acts as a topping for the vegetable base. This is a chili like you never imagined chili could be. 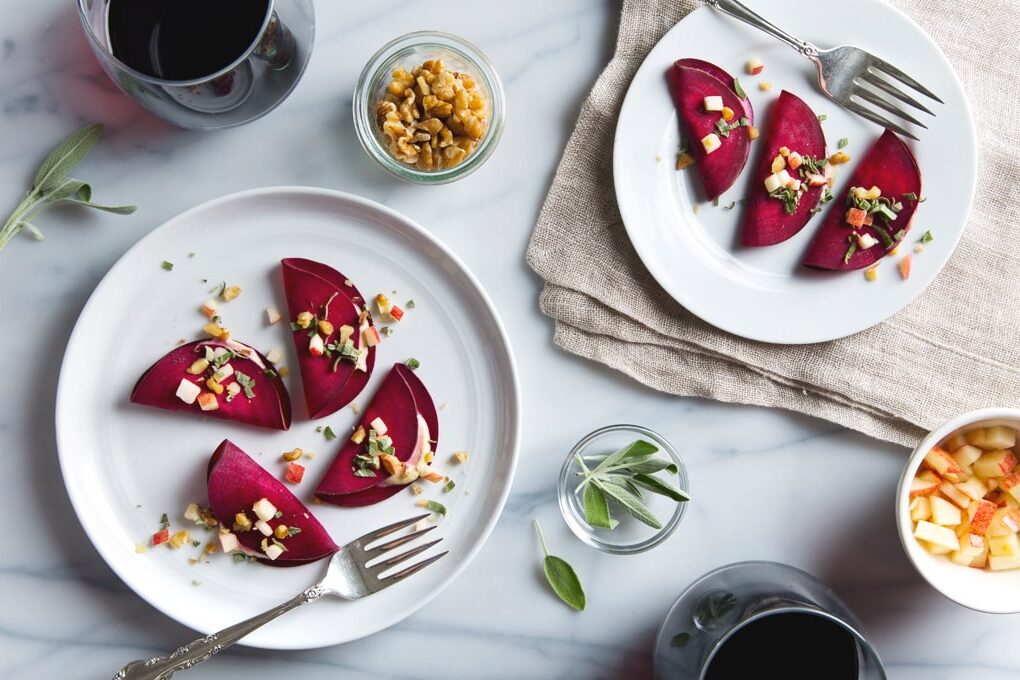 Could this raw beet ravioli be any more beautiful? We think not, and on top of being gorgeous, they’re an unusual way to add raw beets to your diet. Despite being high in sugar, beets actually aid in controlling diabetes, so let yourself off the hook for enjoying their sweetness in this dish. The filling is a cashew cheese, which takes on an umami richness with healthful nutritional yeast and probiotic white miso. 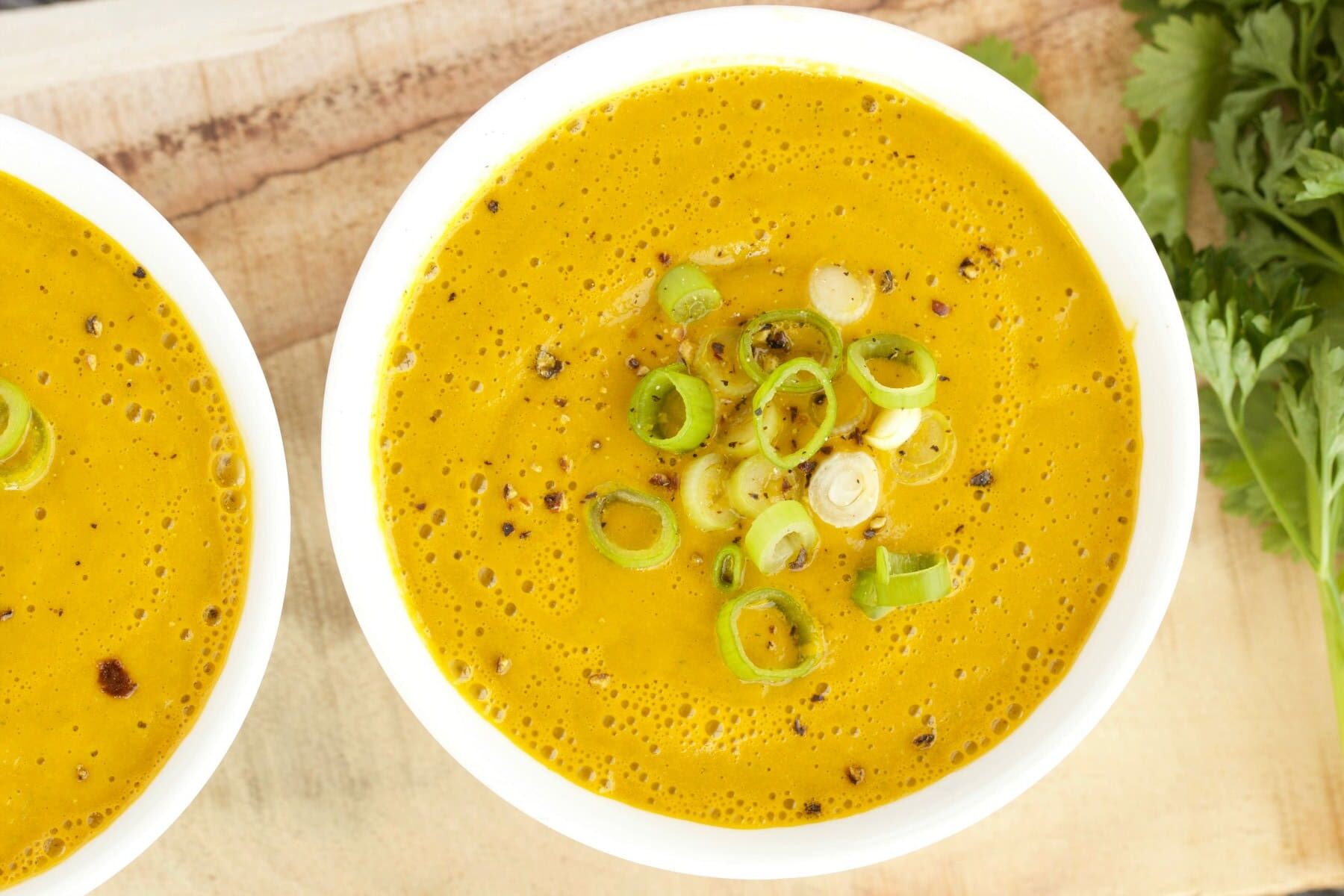 Because gazpacho is so common as a raw vegetable dish, we wanted to give you a recipe for one that wasn’t the usual tomato or cucumber. This carrot gazpacho has just a few ingredients, and uses avocado to provide a thick and creamy texture. The carrot flavor comes from freshly juiced carrots. If you don’t have a juicer, you can buy fresh carrot juice; we recommend avoiding the jarred version, as that won’t have the raw goodness that’s so important. Don’t skip the parsley and cilantro, as fresh raw herbs are equally as nutritious as other leafy greens and count as raw vegetables too. 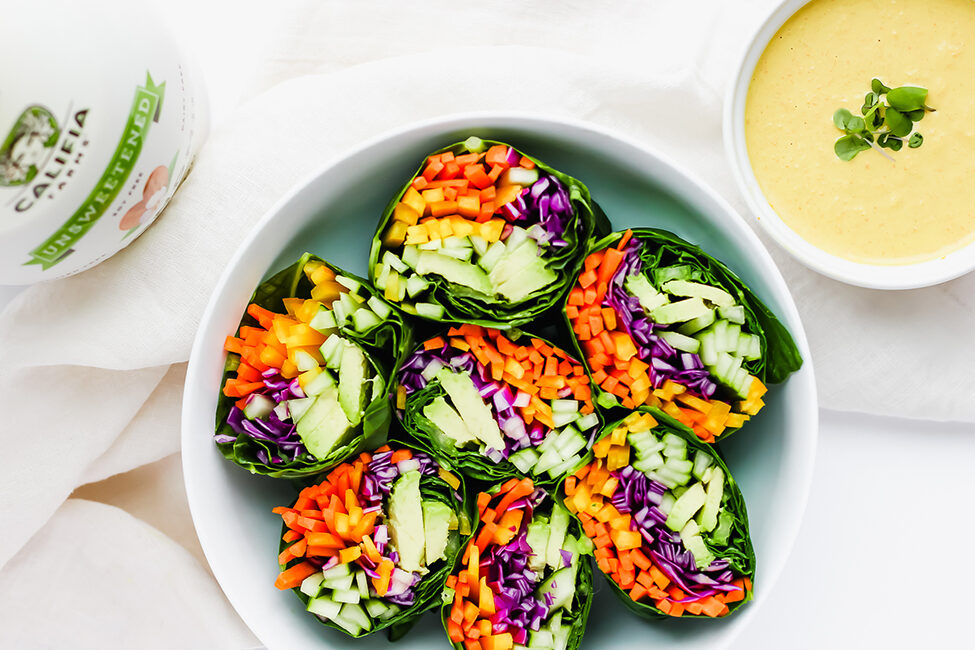 The beauty of a raw collard wrap is that you have endless choices for what you fill them with–and almost anything you choose will look beautiful when cut in half! This raw rainbow wrap goes full “ROYGBIV” thanks to vegetables like purple cabbage, yellow bell pepper, and cucumber. The ginger tahini dressing is used as a dipping sauce and contains even more vegetables by way of raw carrots. Fresh ginger is a potent anti-inflammatory, and by using multiple tablespoons of it raw, you’ll be getting it at full strength. This raw vegan lasagna is the highest rated one around. Unlike many raw vegan lasagna recipes that require days of dehydrating, sprouting, and otherwise uncooking your prep components, we chose this one because it takes only twenty minutes to make from start to finish. The “cheese” layer is made of soaked cashews and almonds, and the pesto layer is made extra creamy with avocado. We love the usage of thinly sliced zucchini, and the tomato layer that contains both fresh and sundried tomatoes. Topped with pine nuts and innovative poppy seeds, you’ll find this lasagna surprisingly filling, given that it’s mostly comprised of raw vegetables. 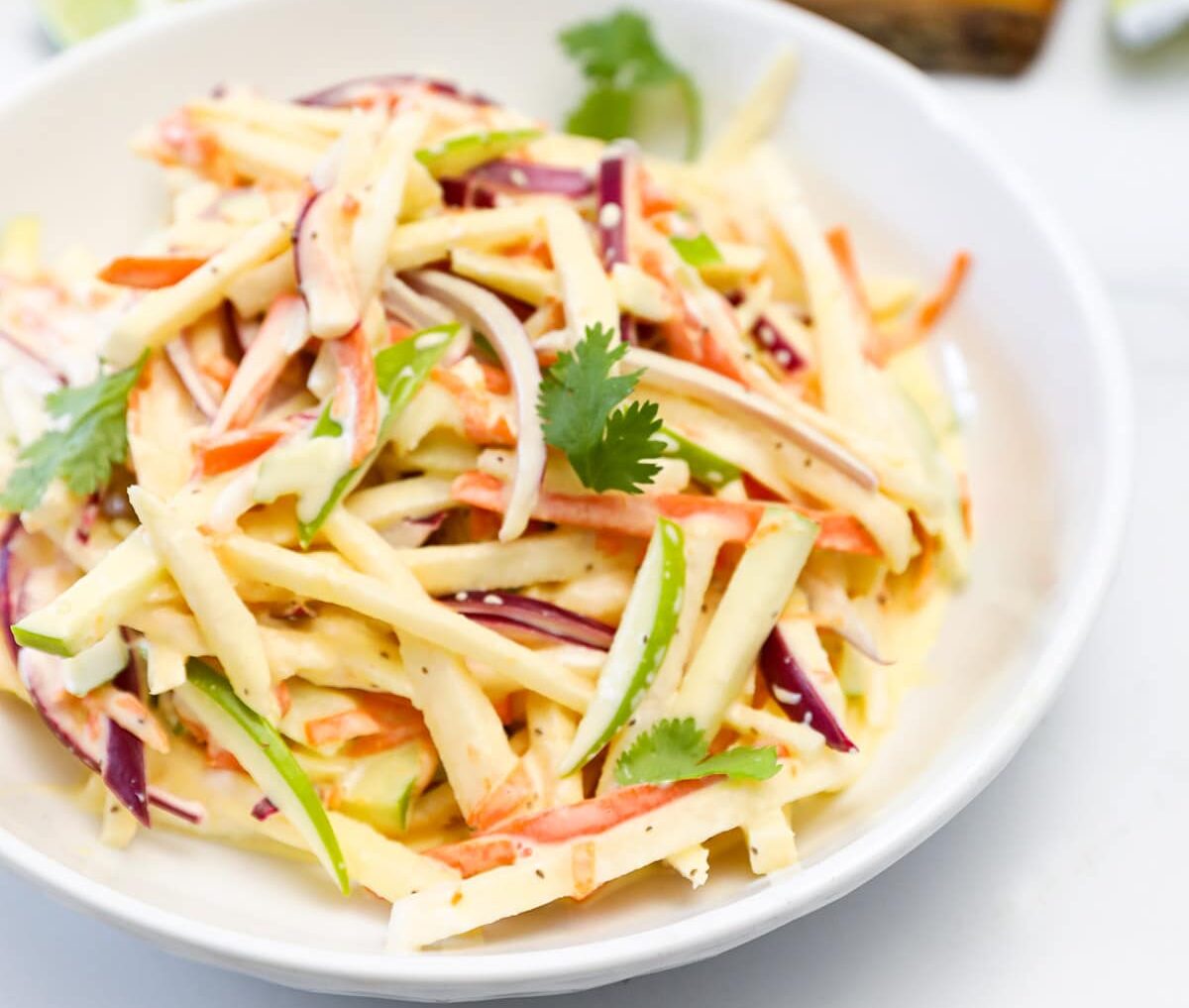 If you thought chopped cabbage was as far as slaws could go, there’s a new world available to you. This vegan jicama slaw is the perfect example of how versatile slaws can be, and they don’t even need any cabbage at all. Jicama and green apple are a delicious combination, with the mild sweetness of jicama naturally playing off of green apple’s tart nature. Jicama is a wonderful source of prebiotics, which are the fiber that probiotics eat, and it has a crispness and crunch that last for days after cutting into a matchstick shape. You can use a slaw like this as a topping for sandwiches and burgers, or served over greens for a bowl of raw vegetable bliss.

Read next: The Best Vegan Products on the Market According to Someone Who’s Been Vegan for 12 Years