10 Healthful Chickpea Soups from Around the World

Chickpeas are an incredibly important part of so many different cultures’ culinary traditions, and that makes sense when you consider exactly how ancient they are. The chickpea originated in southern Turkey over 10,000 years ago, and you can still find its wild ancestor growing there today. Domesticated versions of the plant have been found in that same region for over 9,000 years, and they spread across the Mediterranean by 6000 BCE and to India a few thousand years after that.

Read next: 10 Healthful Chicken Soups from Around the World

It makes sense that the chickpea would become such a globally popular legume. It has a buttery texture and mild flavor that lends itself well to a wide array of spices. It’s also incredibly healthful: They’re packed with fiber and protein, as well as minerals and vitamins. In a medical study, researchers discovered that people who regularly ate chickpeas also had a lower BMI. Legumes like chickpeas have also been shown to lower LDL cholesterol (the bad kind). We put together a collection of delicious chickpea soups from cultures across the globe that are genuinely delicious and can help you take advantage of the chickpea’s incredible health benefits. 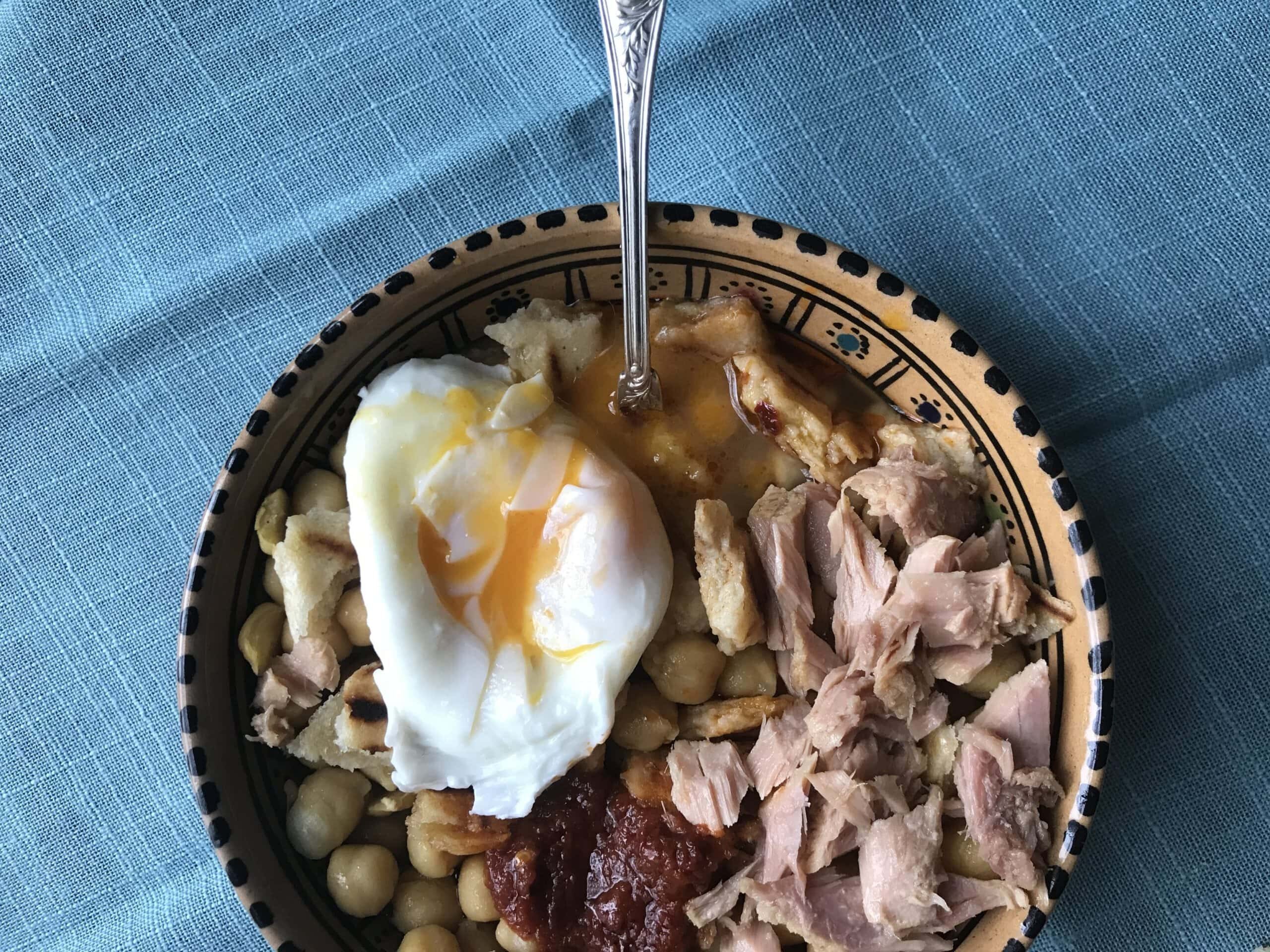 As recipe authors Rim and Munya note, Lablebi is basically the Tunisian version of “fast food” — meaning that it’s traditionally served in casual cafeterias as a quick meal, not that it’s an unhealthy treat. In fact, this soup is phenomenally good for you: It’s filled with protein, due to the use of both canned tuna and poached eggs, and the inclusion of harissa makes it brightly spicy — and studies show that spicy foods might help prolong your life. 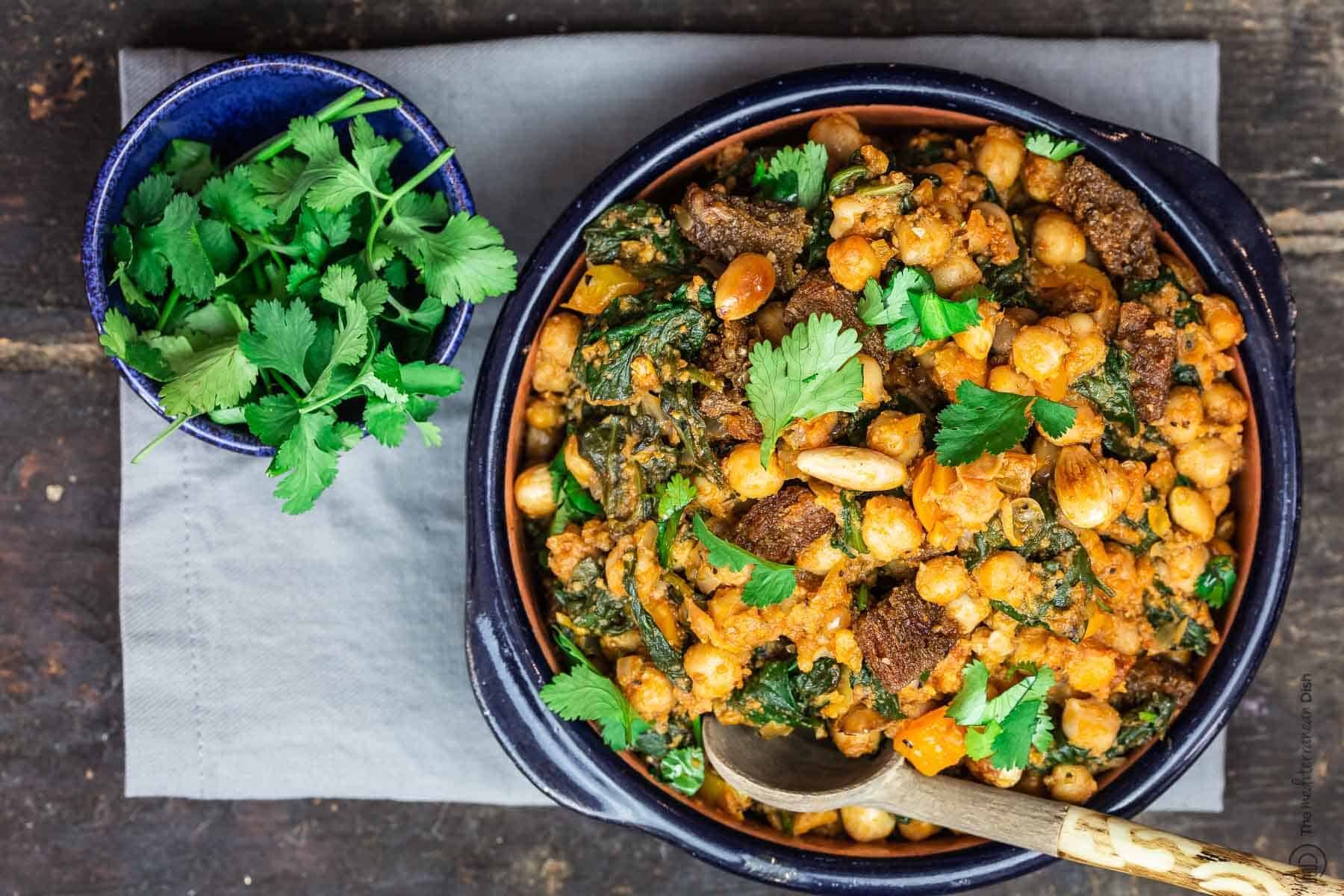 Traditionally served as tapas, this flavorful chickpea cazuela would be amazing served as a small portion alongside a Spanish tortilla, a tray of olives, some gambas pil pil… along with any other of your favorite tapas dishes. However, we’d definitely serve this stew as a standalone dinner, too. Because it makes use of spinach and almonds, this chickpea stew packs plenty of heart-healthy fiber and protein. Plus, red bell peppers are filled with carotenoids, an especially powerful antioxidant. 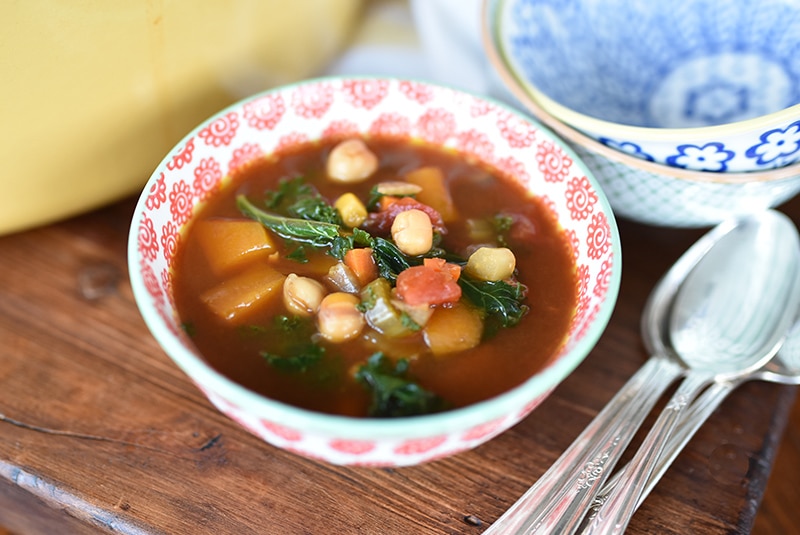 This vegetarian, gluten-free soup isn’t exactly a traditional Lebanese recipe, but as recipe author Maureen Abood notes, when she’s cooking it and adding her own Lebanese influence to a dish, she’s happy to claim it as part of her culture — and we’re on board. This delicately spiced dish is filled with good-for-you vegetables like kale and butternut squash, the latter of which is especially rich in vitamin A, a nutrient essential for good eye and bone health. 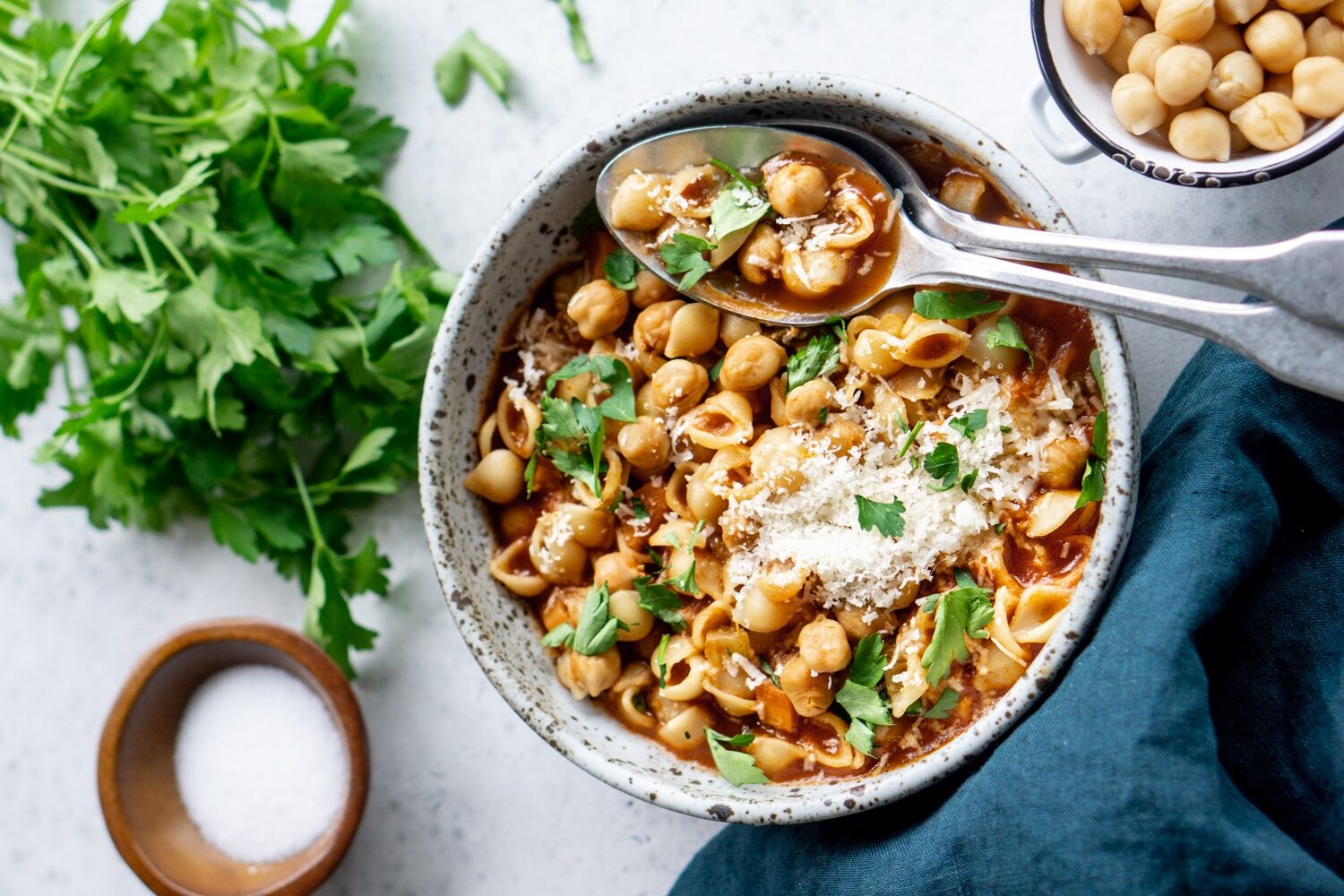 This Italian chickpea soup is comforting and delicious. As the recipe author notes, make sure you don’t leave out the liquid from the can of chickpeas, called aquafaba — it thickens the soup and underscores the chickpea’s flavor. We’d serve this soup with a big, lemon-y salad, or a plate of roasted asparagus. This dish does involve pasta, so if you’re trying to avoid refined grains, you can always use a 100% whole grain pasta or feel free to simply leave out the pasta altogether — with all the vegetables and chickpeas, it will still be quite filling. 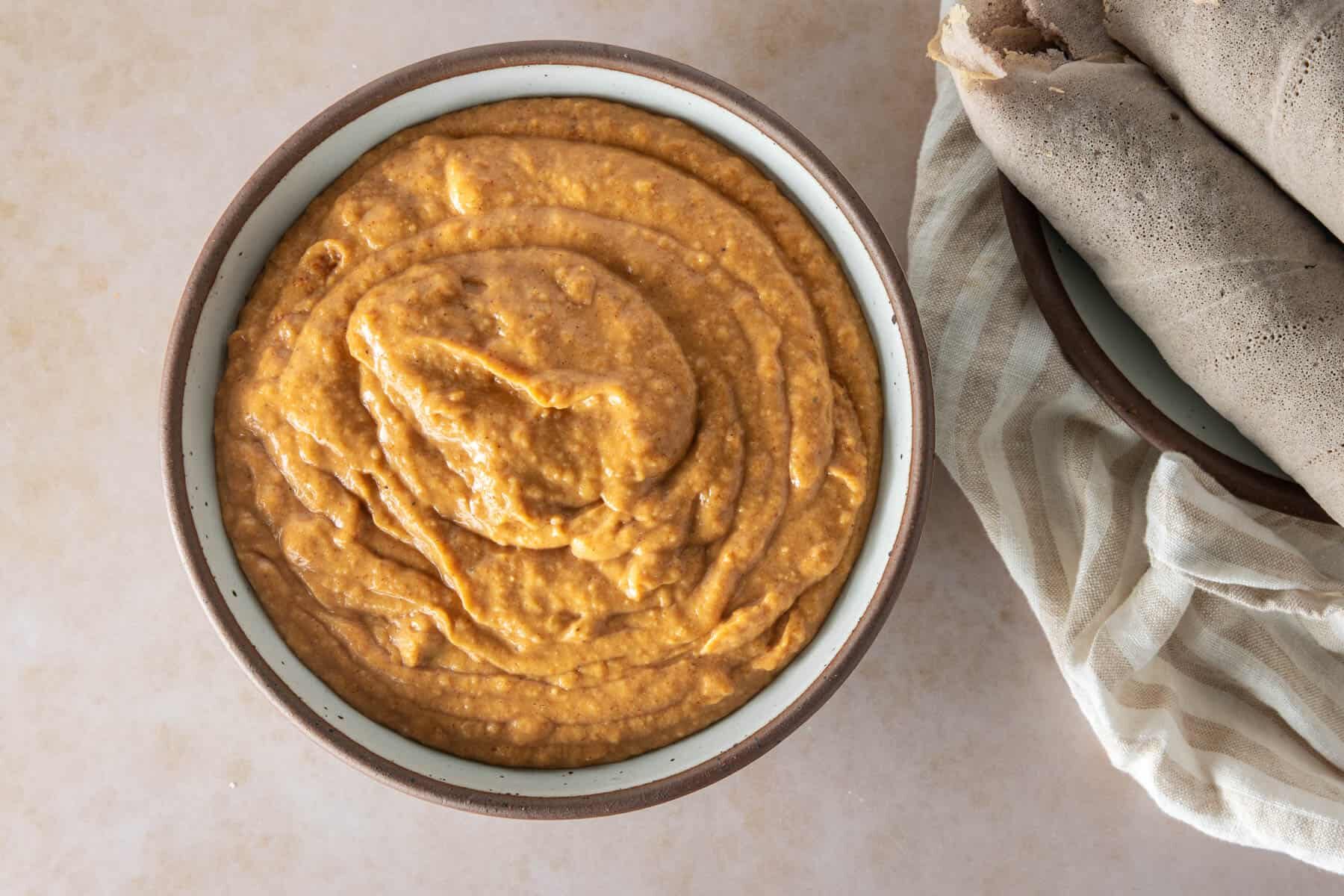 Shiro wat is absolutely delicious  — it’s layered, lightly spicy, and best of all, takes just 45 minutes from start to finish (and that’s if you make it from scratch). This dish is made using chickpea flour, which means it’s brimming with folate, and contains several other minerals, including iron and magnesium. Serve with injera (teff flatbread) and gomen (greens). We recommend making extra because it lasts in the fridge for days, and the flavors only get better the longer they have the chance to marry. 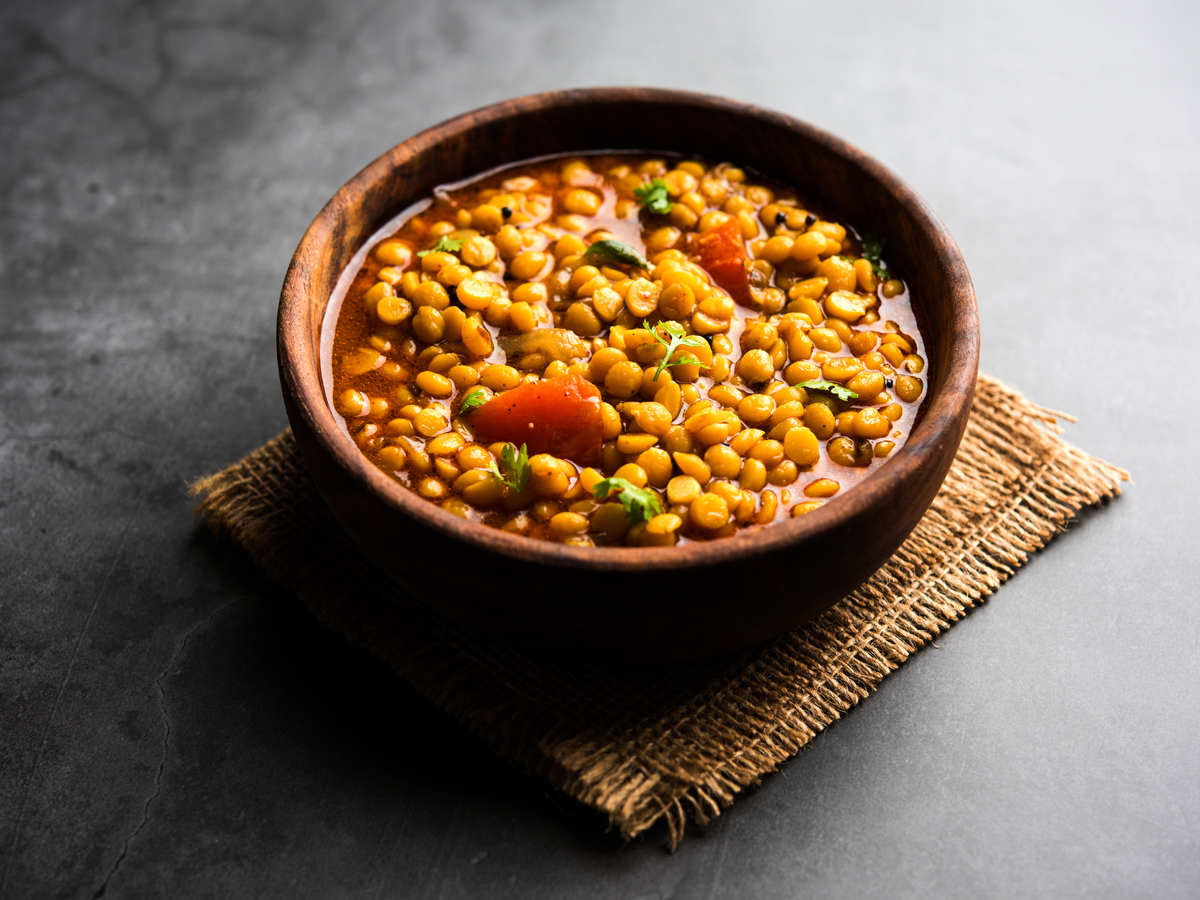 This chana dal recipe is as easy as it gets since it’s been adapted for use in an Instant Pot. Made with tons of flavorful spices, including anti-inflammatory turmeric, this dish takes just 30 minutes to make. To include some greens, recipe author Meeta notes that you can add fresh spinach to the dish by tossing it in when you open the instant pot right after the pressure cooking cycle has completed, then cover and let it rest for five minutes. For a grain-free option, serve over cauliflower rice in lieu of white rice. 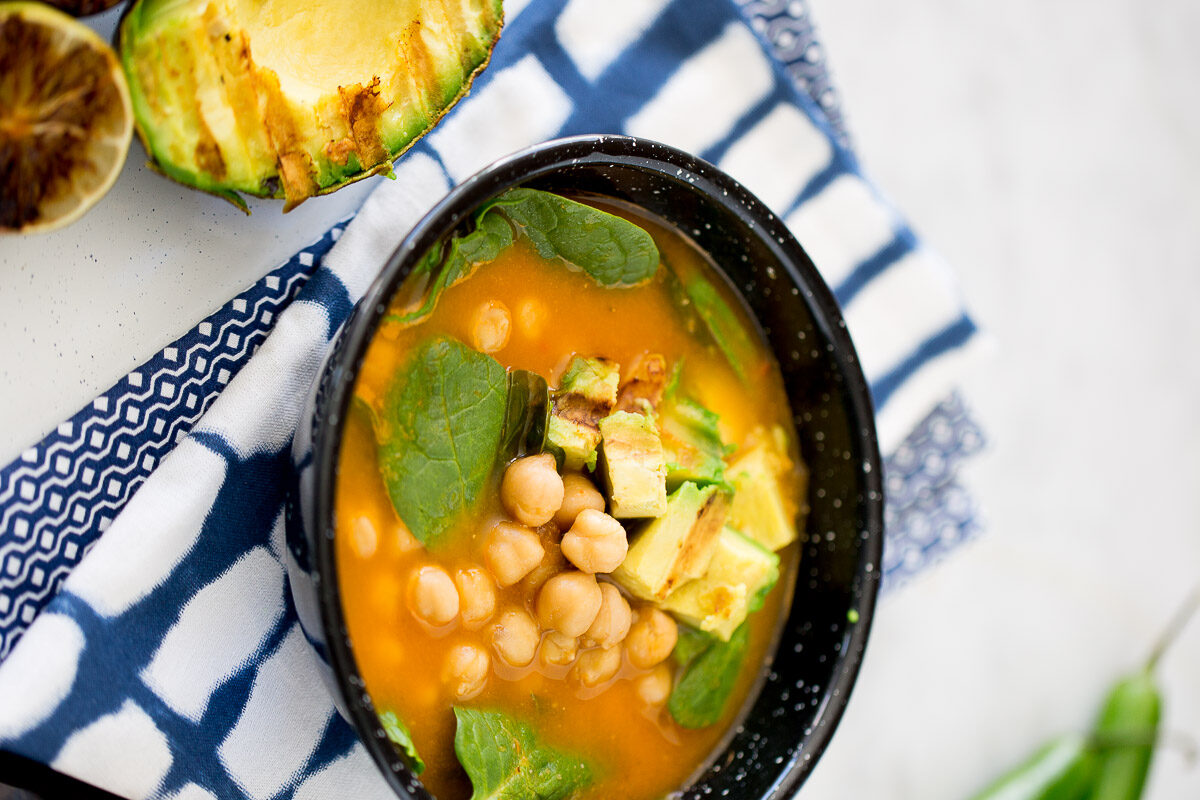 We’ve used avocados so many different ways over the years, but roasted avocado soup is a new one. This healthful, garlicky soup only requires a handful of ingredients, but becomes more than the sum of its parts as it comes together. While grilling the avocado, we’d throw some thick-sliced vegetables on there too, like bell peppers, eggplants, and zucchini for a super-easy, healthy side — just drizzle with some olive oil and lime juice, and top with a little finishing salt. This chickpea soup hails from Provence in the south of France, and while some French food can seem intimidating, we promise that this is incredibly easy to make. It’s also a very malleable recipe that works well with a lot of variations. Feel free to add sautéed leeks or shallots at the beginning, extra chickpeas, and some parmesan at the end.

Read next: These High-Protein Soups Will Give You Lasting Energy