There’s a lot to love about cast iron skillets, but their ability to go from the stovetop straight into the oven might be our favorite. You can sauté and sear on the stove, then move to simmer gently in the oven — or add a beautiful brown crust with a trip under the broiler.

Cast iron can seem overwhelming at first because it needs to be “seasoned” before the first use — which really just involves coating it in oil and baking it in the oven. Seasoning actually has nothing to do with flavor; it refers to the hard, protective coating that is formed as the oil bakes into the iron in a process called polymerization. This makes the skillet nonstick without the use of harsh chemicals. After the initial seasoning, cast iron should never be washed with soap, but rinsed out with salt and water, dried immediately, and re-oiled if necessary.

Cooking a dish entirely in a cast iron skillet means fewer dishes to wash, which is a clear win, but cast iron also holds heat for much longer than most other cooking materials. This means your food will stay piping hot — even when serving multi-course meals.

Healthy cast iron skillet recipes contain even more benefits than their ingredients might suggest: a small amount of iron is actually absorbed into food cooked in a cast iron skillet. In fact, studies show that people with low iron counts can build up their iron levels simply by cooking in cast iron.

We rounded up the best healthy cast iron skillet recipes that make great use of this versatile tool. (And thankfully, these one-pan dishes require very little clean-up, too.) 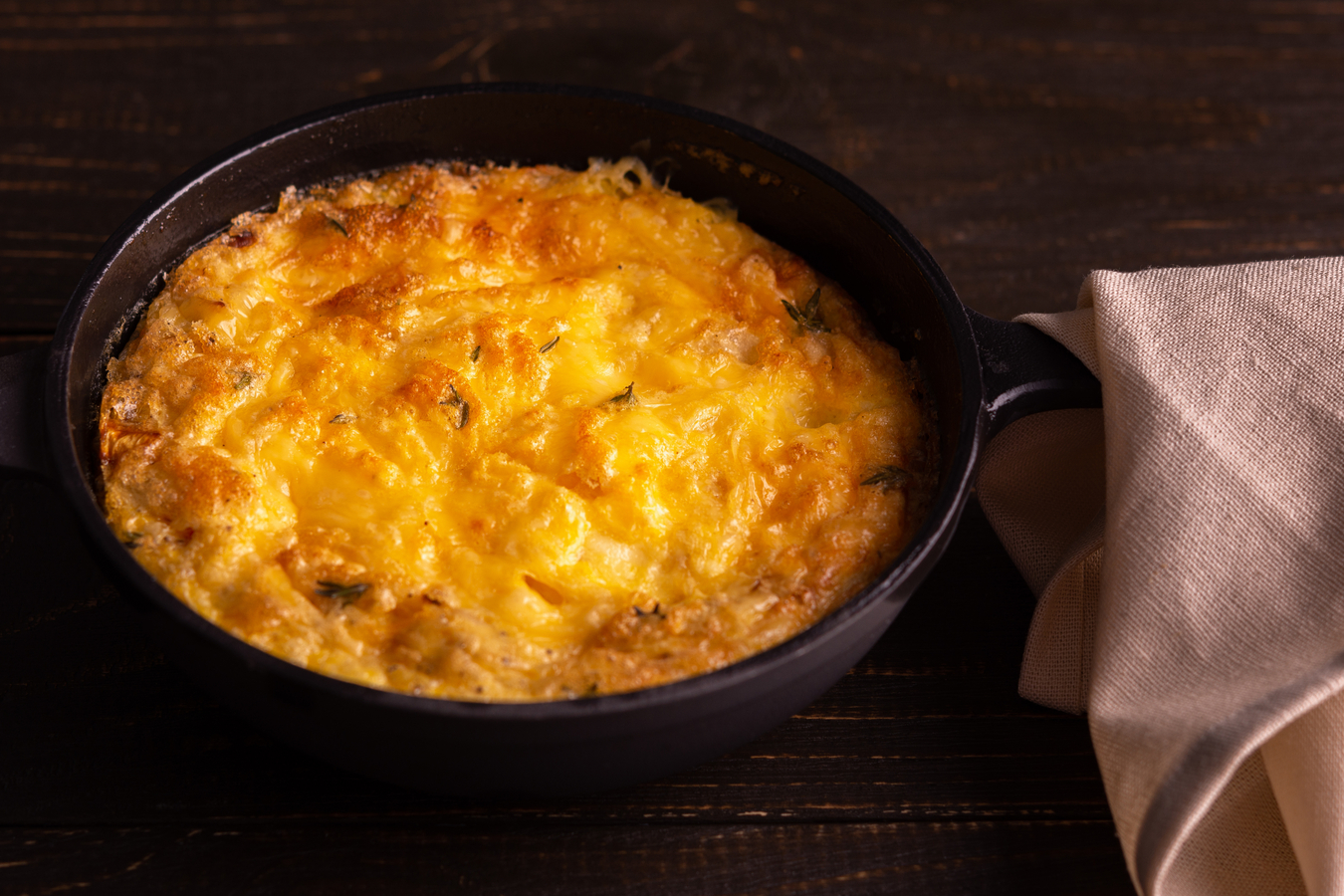 Leave the processed cheese on the shelf for this creamy, healthy queso that has a secret stash of squash packed inside. Red onion, chicken stock, and chipotles in adobo sauce amp up the flavor so most people might not even suspect there’s pumpkin within. Make sure to use a rubber whisk to keep your cast iron pan in prime condition and to make sure everything is evenly mixed up before putting the queso under the broiler for that extra-melty top layer. Serve with flaxseed tortilla chips and cut vegetables for an especially healthful meal. 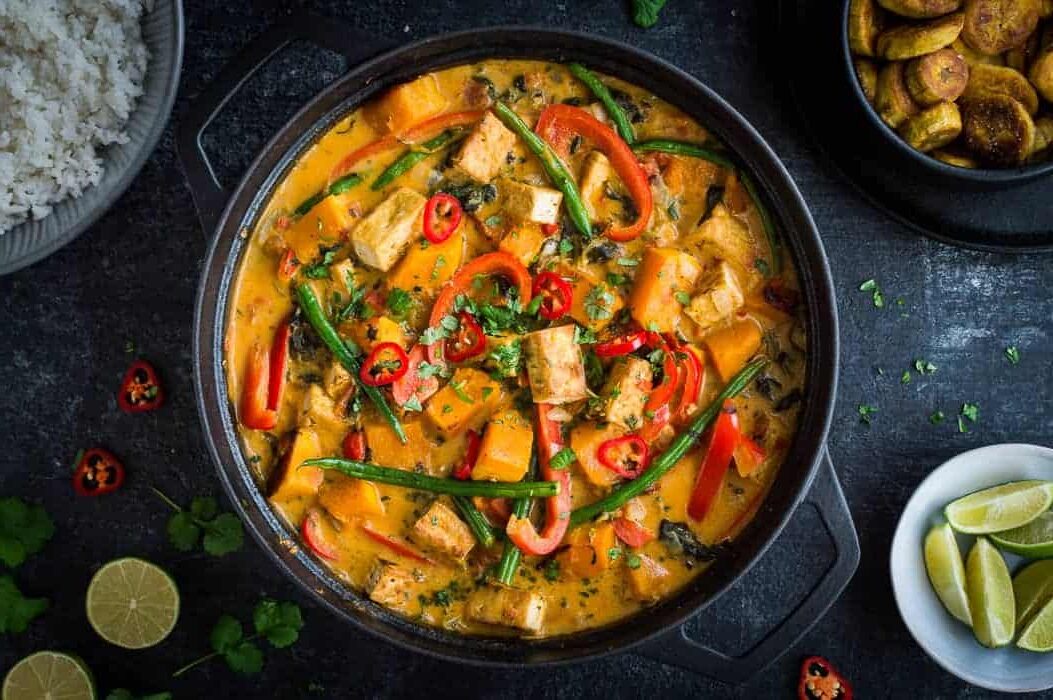 Shake up your stews with some Brazil flavor inspiration in this veganized version of moqueca, traditionally a fish-based dish. (Roasted butternut squash and tofu stand in for the fish in this recipe.) The coconut, lime, and tomato-based sauce is phenomenally fragrant and flavorful, and this recipe can be made completely one-pot, or the butternut squash can be roasted in the oven separately — cook’s choice. Just make sure to use a large enough skillet to hold all of the ingredients in this saucy stew. 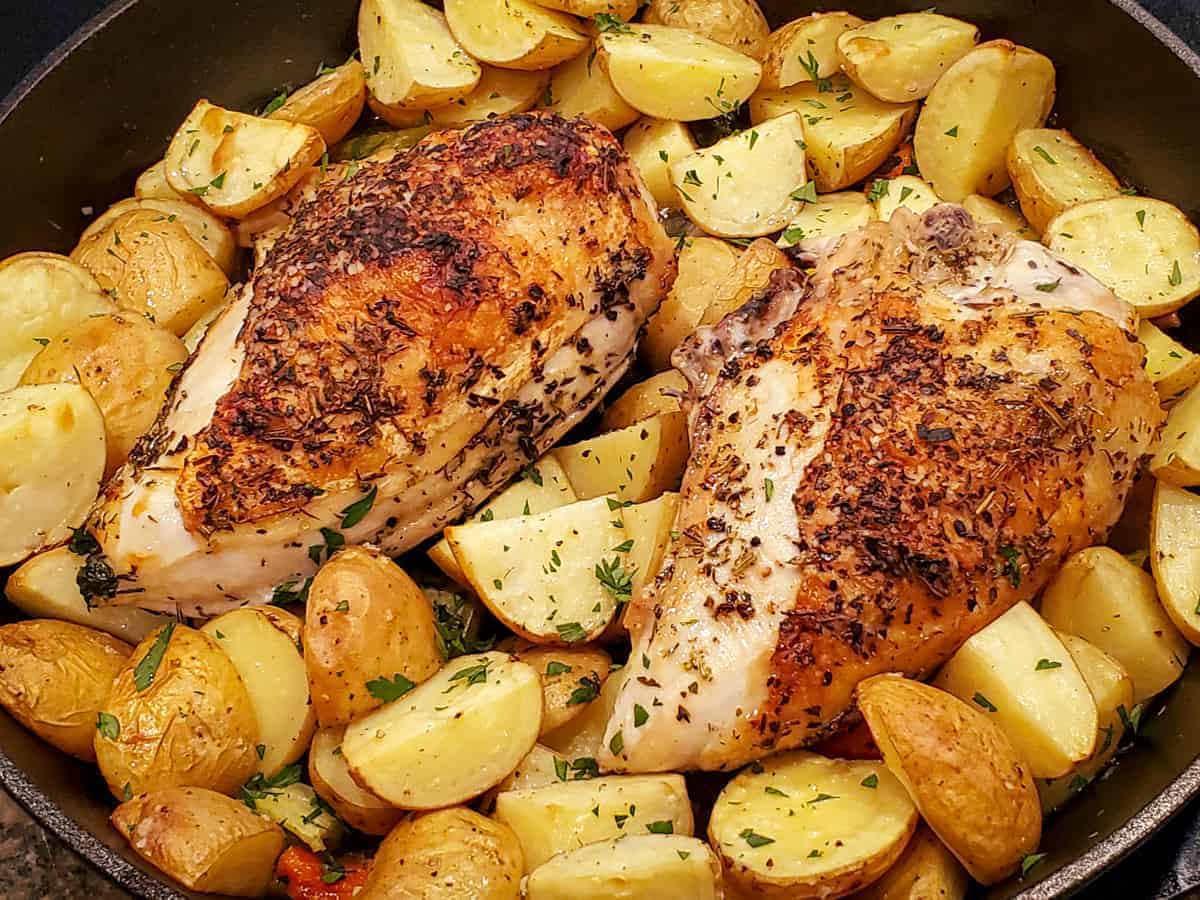 A meat-and-potatoes night doesn’t always have to mean beef. This tantalizing chicken recipe comes together in a cast iron skillet, where the small amount of fat from the chicken — plus a little oil and chicken stock — seasons the vegetables and creates a delectable pan sauce. The carrots and onions cooked in the same skillet make this a complete meal that’s perfect for a chilly autumn or winter evening.

4. Seafood Paella in a Skillet Ever seen a chef in a restaurant cooking paella in one of those big, curved pans? Those are great, but paella doesn’t actually have to be cooked in an enormous specialty pan. A cast iron skillet does the trick for a smaller crowd — and even gets you that crackling-crisp, caramelized rice, called socarrat, that’s such an important part of the dish. This is honestly one of our favorite healthy cast iron skillet recipes. It uses plenty of seafood for lean protein and adds a Spanish flair with white wine, bell peppers, and saffron. Can’t find (or don’t want to buy) the four types of seafood this recipe calls for? Mix and match with what you have on hand, and make this your own personal paella. Given the amount of acid in this dish, we’d recommend using an enameled cast iron skillet for this one. 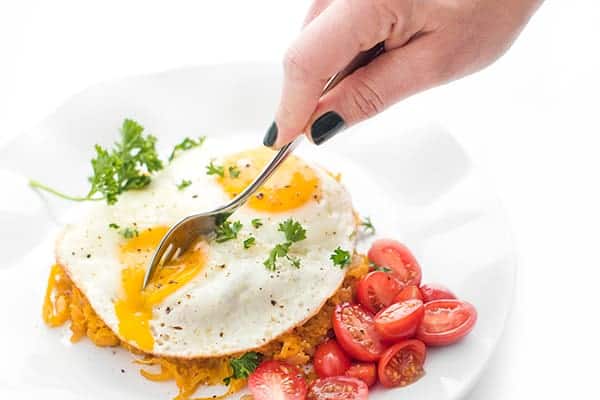 Pro tip: Cast iron is great for the morning, too. Spiralized butternut squash is the base for this hash, while onions, garlic, and cayenne pepper provide a flavorful zing. Using cast iron helps to crisp up a few edges of the butternut squash spirals for a perfect textural contrast. Because no breakfast is complete without protein, top the hash with sunny-side-up eggs for that gorgeous, golden yolk. For extra color and flavor, try adding other types of root vegetable spirals, like beet or potato spirals, too. Image credit: Ahead of Thyme

Recreate the sizzle and pop of fajitas at home with your cast iron skillet. Fajitas benefit from the kind of high-heat tolerance a cast iron skillet can offer, and it gives the vegetables that classic charred look. Besides smelling incredible, being extremely healthy, and easy to clean up, chicken fajitas can go from the stovetop to the dinner table in just 15 minutes. To save on carbs, these fajitas don’t necessarily need to be eaten in tortillas. Simply serve over steamed quinoa for a low-carb, healthful spin that’s just as tasty. 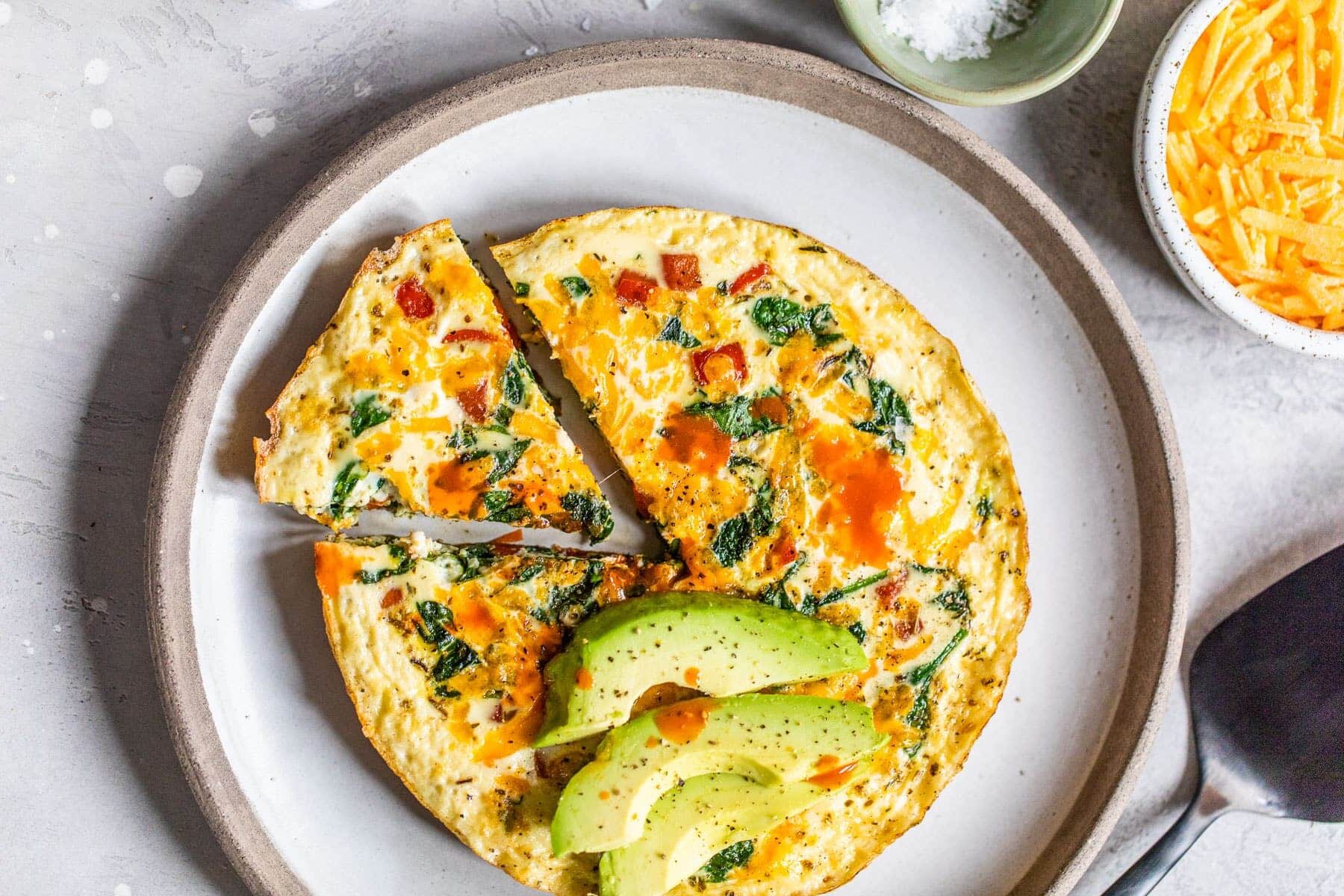 Egg white frittatas can sometimes be healthier than whole egg frittatas, but they need to be dressed up a little more to make them taste just as great: This is where bell peppers and onions come in, along with spices and hot sauce. Everything gets sautéed on the stovetop, then the eggs set in the oven. This frittata is totally customizable to your tastes (and what happens to be in the fridge) so you can add any vegetables you prefer to make your perfect breakfast. 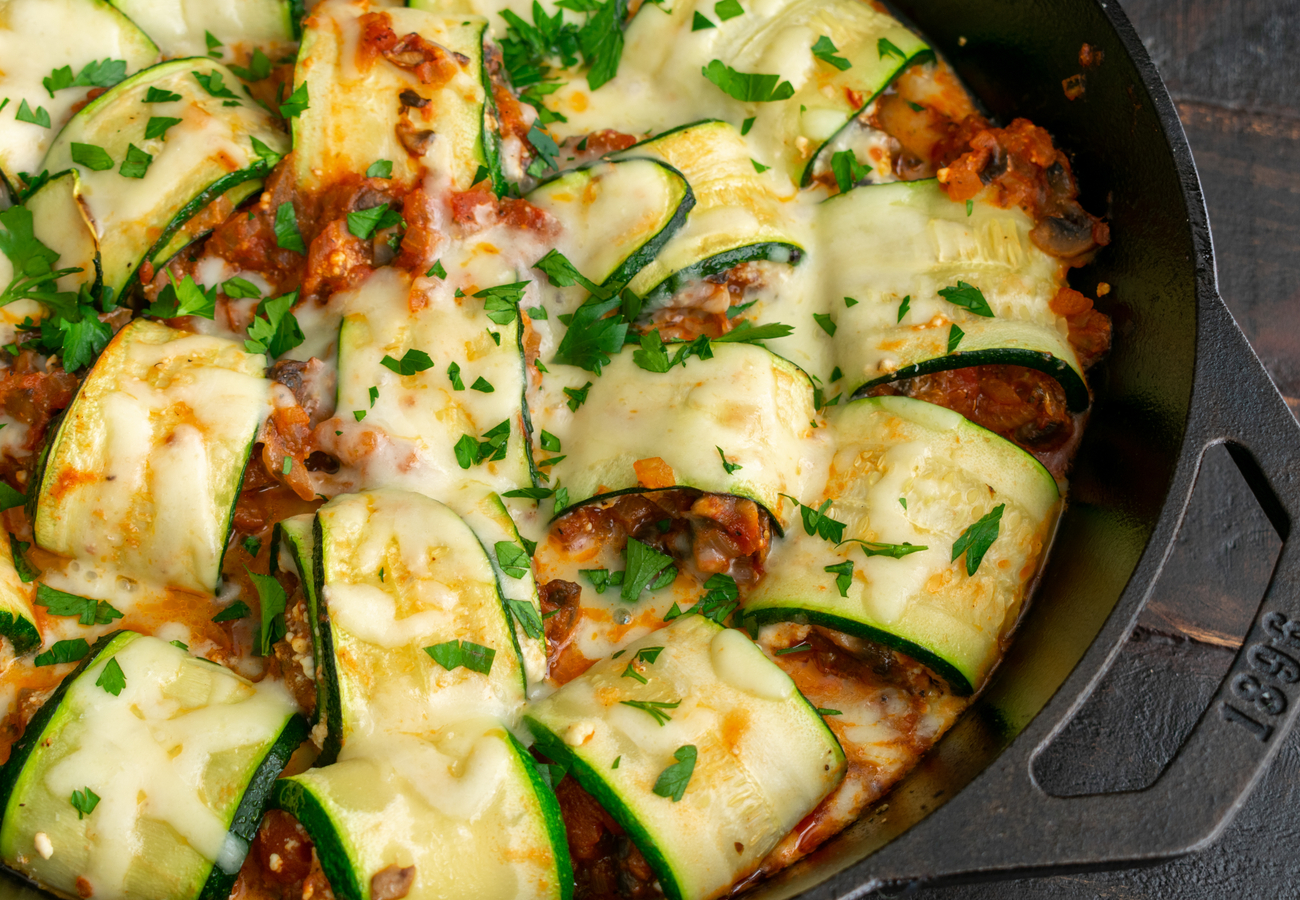 It’s true, you can enjoy the same flavors as lasagna with fewer carbs — and as a one-pan meal. Everything in these lasagna rolls gets prepped on the stovetop, then the cheese melts in the heat of the oven. It makes for a meal that can be eaten directly out of the skillet with a fork (or served with a turner, if you want to get fancy about it). When making this dish in a cast iron skillet, opt for a very well-seasoned or an enameled cast iron pan because acidic ingredients like tomatoes can strip the seasoning.

April Blake is a travel and food writer who lives in South Carolina. You can find her at theaprilblake.com, and enjoys trying new beverages, vinyasa yoga, and petting her dogs.