Is there anything better than creamy, dreamy mac and cheese? On your worst days it’s there to comfort you, and on your best days it feels like a celebration. No one — and I mean no one — doesn’t like mac and cheese. And it’s surprisingly easy to make your favorite dish just a little more healthful. By sneaking in some roasted vegetables or amping up the protein with alternative pasta, you don’t have to sacrifice flavor for a more nutrient-dense meal. Here are 10 healthier mac and cheese recipes.

Bookmark this Instant Pot recipe when you need mac and cheese in a hurry. It only takes four minutes to make after the pot comes to pressure! The healthy twist? Grated cauliflower. Erin of Well Plated says that no one ever guesses that there’s an added vegetable in this dish — even kids.

The “cheese” sauce in this macaroni and cheese is a mix of cashews, butternut squash, nutritional yeast, Dijon mustard, and spices. The butternut squash is responsible for that traditional orange color you normally find with cheddar, and it’s packed with nutrients like Vitamin A and Vitamin C. The gourd also adds a nice, subtle sweetness to the dish when it’s roasted beforehand.

The easiest way to make your macaroni and cheese a little more healthful is by adding some vegetables. This recipe calls for adding a sheet pan of roasted peppers, squash, broccoli, and mushrooms and also lightens up the sauce a little by using evaporated 2% milk instead of heavy cream.

Leave it to Giada de Laurentiis to create a recipe that looks and tastes like a full-fat macaroni and cheese, but is sneakily lightened up. Her trick? She swaps in Greek yogurt for butter, and adds crushed rice cereal for the perfect crunchy top and a boost of fiber. She also recommends using gluten-free noodles here (if that’s your thing).

For a low-carb option, swap the noodles for spaghetti squash! It’s easier to prepare than you think: Roast your squash, cut it open, and scrap out the “noodles.” Then you add the squash to your cheese sauce and bake.

This recipe amps up the protein in traditional mac and cheese by using chickpea pasta and Greek yogurt. I’m a huge fan of chickpea pasta. It’s delightfully nutty and has a great bite — and I would reach for it even if it didn’t have the added nutritional benefit.

Another way to add protein to your mac and cheese is simply by adding animal protein! This Tuscan-inspired recipe from Cafe Delites uses paprika-spiced chicken, mushrooms, sun-dried tomatoes, and spinach. It’s a little more work intensive than the other recipes on this list, but it’s worth the effort.

Kick your mac and cheese up a notch in health and flavor by adding some spicy cauliflower to the mix. This hot take on clean comfort uses gluten-free macaroni noodles loaded with buffalo-spiced roasted cauliflower and baked up in a vegan cheesy sauce to make a dish you’ll dream about. 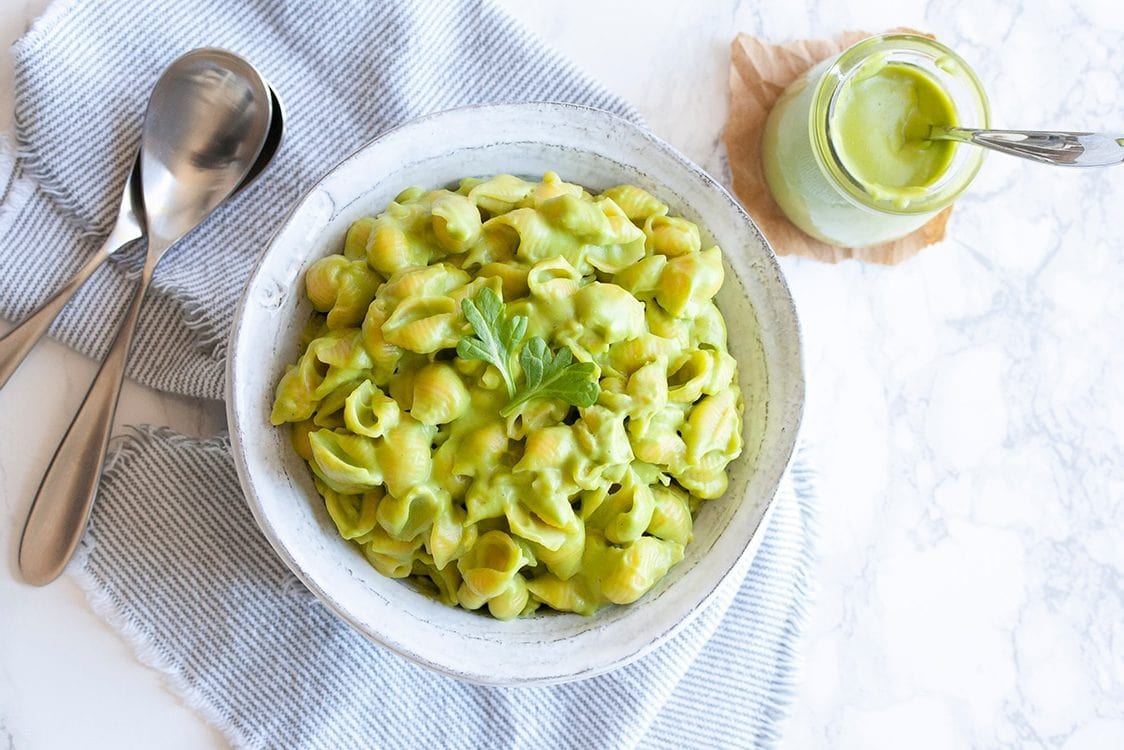 This delicious creamy dairy-free mac and cheese has a secret. It’s packed with cauliflower, potatoes, and spinach greens you don’t even taste! Talk about sneaking in some veggies.

Who would have thought the creamiest mac ‘n’ cheese ever is made with a simple eggplant-based cheese sauce? Throw in some caramelized onions and toasted breadcrumbs send to send this dish over the top.