Cold soup recipes might seem like a strange (possibly even unsettling) choice to many American palates, but there’s a reason that cultures around the globe have been enjoying a wide variety of cold soups for literally thousands of years: cold soup is quite possibly the perfect summertime meal. Hydrating and nourishing, cold soups are easy to enjoy even in the sweltering heat, when the thought of a heavy, hot meal is often profoundly unappetizing.

The most famous cold soups like gazpacho and borscht, which are absolutely delicious, but we decided to dig a bit deeper into global culinary traditions to find cold soups that are just as tasty — and a little less well-known. 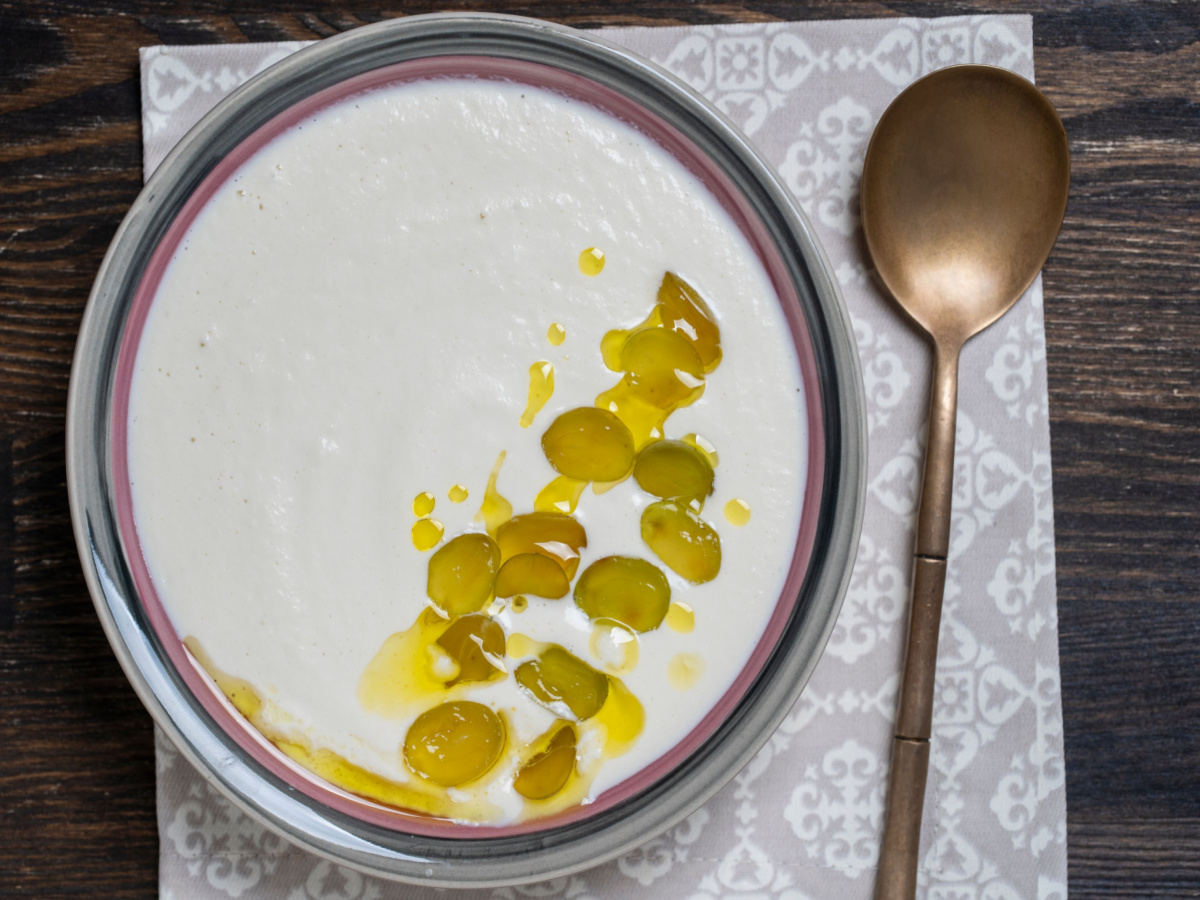 Ajo blanco is a time-honored tradition in southern Spanish cities like Granada and Málaga, where the blisteringly hot summers can make eating anything other than a cold soup feel like a chore. One of the oldest Spanish dishes still made, ajo blanco dates back to Roman cuisine, so although it is sometimes referred to as the “white gazpacho,” it actually predates its tomato-based cousin by over a thousand years. Feel free to replace the bread in this recipe with a gluten-free alternative, or for a less traditional (but still extremely delicious) take, use cooked wild rice to add body and texture without the use of refined grains. 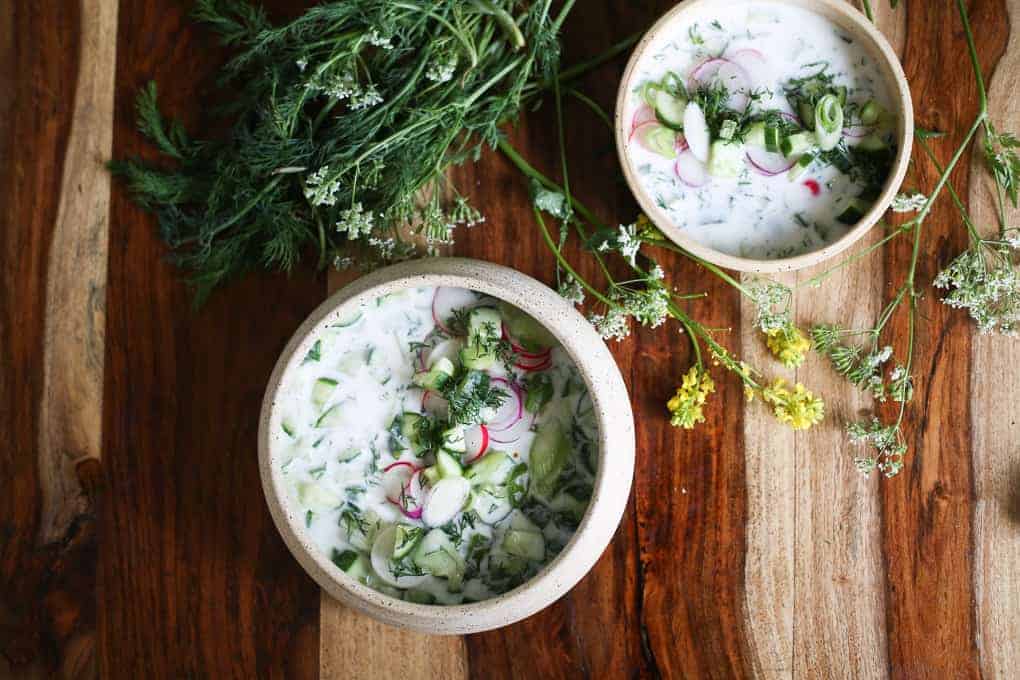 As recipe author Ksenia Prints notes, tarator challenges many conventions simultaneously: that soup is supposed to be hot, that it is an exclusively wintertime dish, and that it requires time cooking on the stove for the flavors to marry. This probiotic-packed, kefir-based soup takes only 10 minutes to whip together, and it’s the perfect antidote to hot summer days. Prints’ version is a slightly updated interpretation of the Bulgarian classic that remains true to the essence of the original, yogurt-based recipe — and she encourages everyone at the table to customize their bowl with garnishes like scallions and feta, creating individualized versions to suit everyone’s tastes. 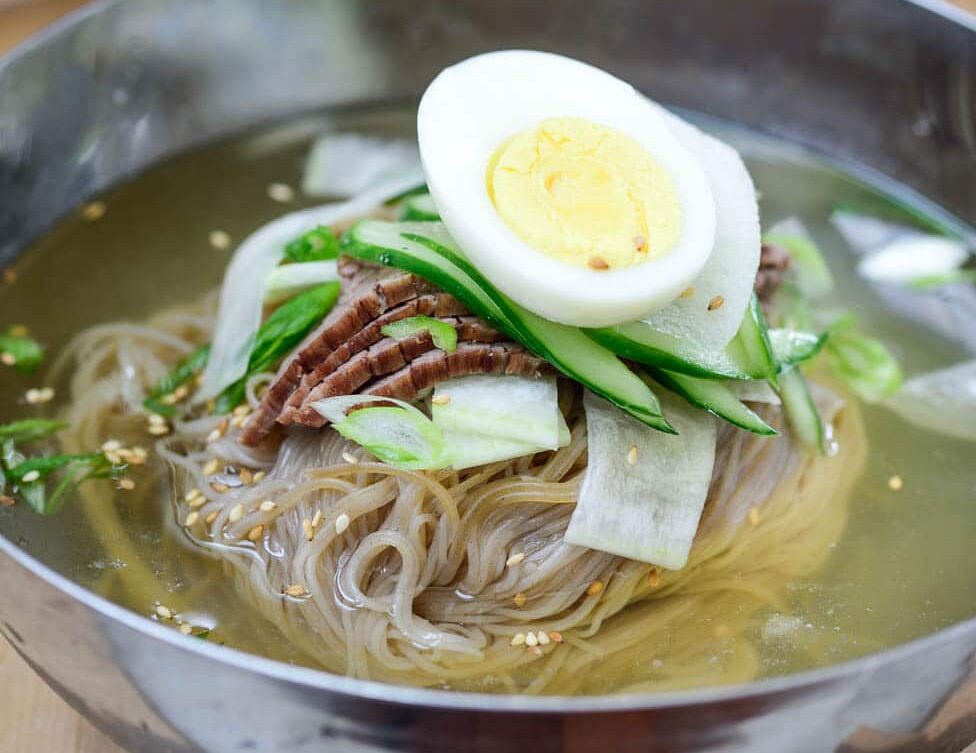 In Korea, cold noodles are a classic way to beat the summer heat while enjoying some delicious whole grains. In mul naengmyeon, buckwheat noodles are served with a cold, clear, flavorful beef broth, along with vegetables like radishes and cucumber. If you have a gluten sensitivity or you’re trying to avoid refined grains, be sure to check the label when buying buckwheat noodles: some are made with only buckwheat and water, while others incorporate white or wheat flour, as well. Another great Korean cold soup recipe you should consider this summer: kongguksu, a chilled soy milk soup featuring tomato and cucumber. 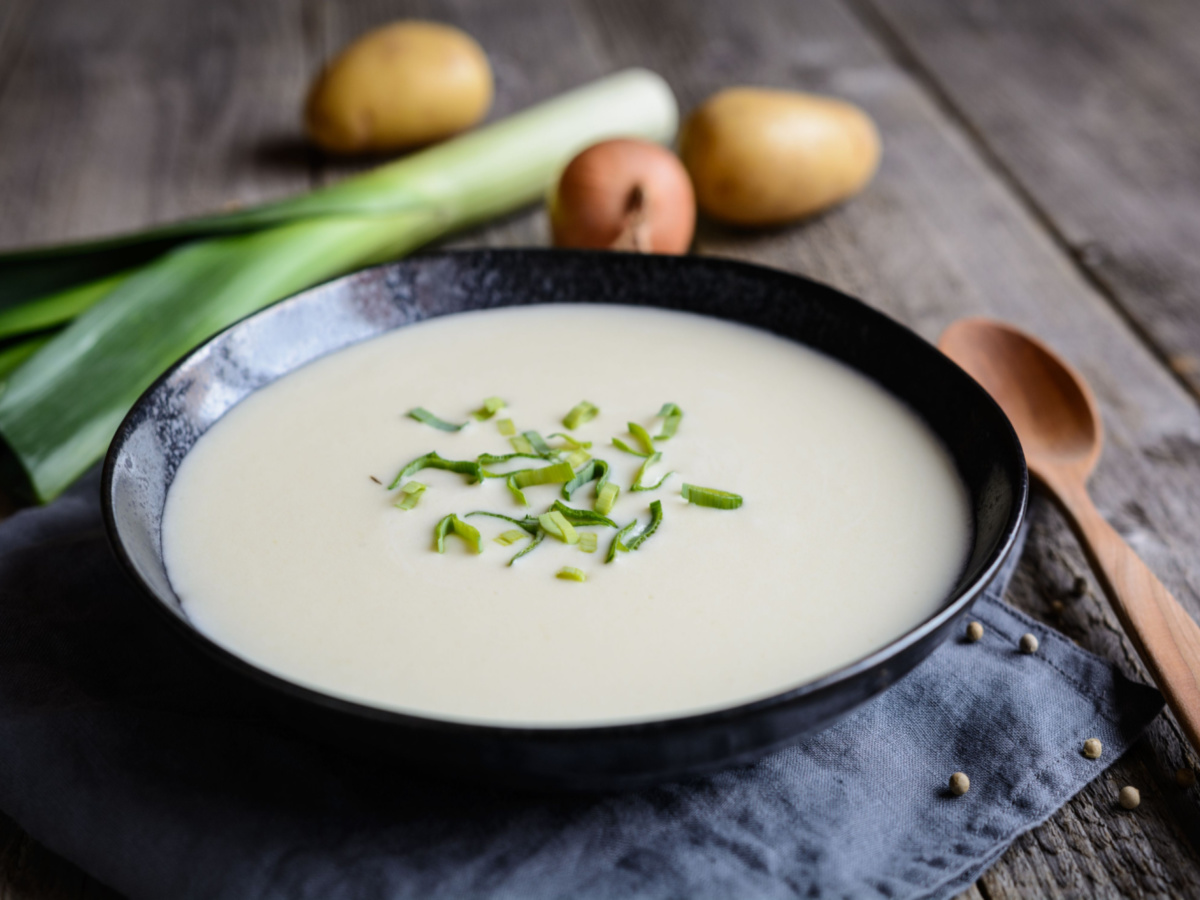 Traditional vichyssoise is absolutely delicious, but since it’s approximately 50% butter and cream, it’s generally a less-than-ideal fit for everyday cooking. This plant-based version is simple, delicious, and derives its creaminess from cashews instead of dairy, but the flavor profile and texture are extremely similar to the original. A regional dish served in Miyazaki, Japan, during the sticky-hot summer months, hiyajiru is usually served as a breakfast, but there’s no rule saying you can’t enjoy it any time of day. If you’d like to replace the small amount of sugar in this dish, you can substitute a little bit of honey instead. This faint hint of sweetness combine with the umami hit from the miso and dashi, the mild nuttiness of the sesame seeds, and the cool, and vegetal crispness of the cucumber, creating a perfectly balanced, light summer dish. 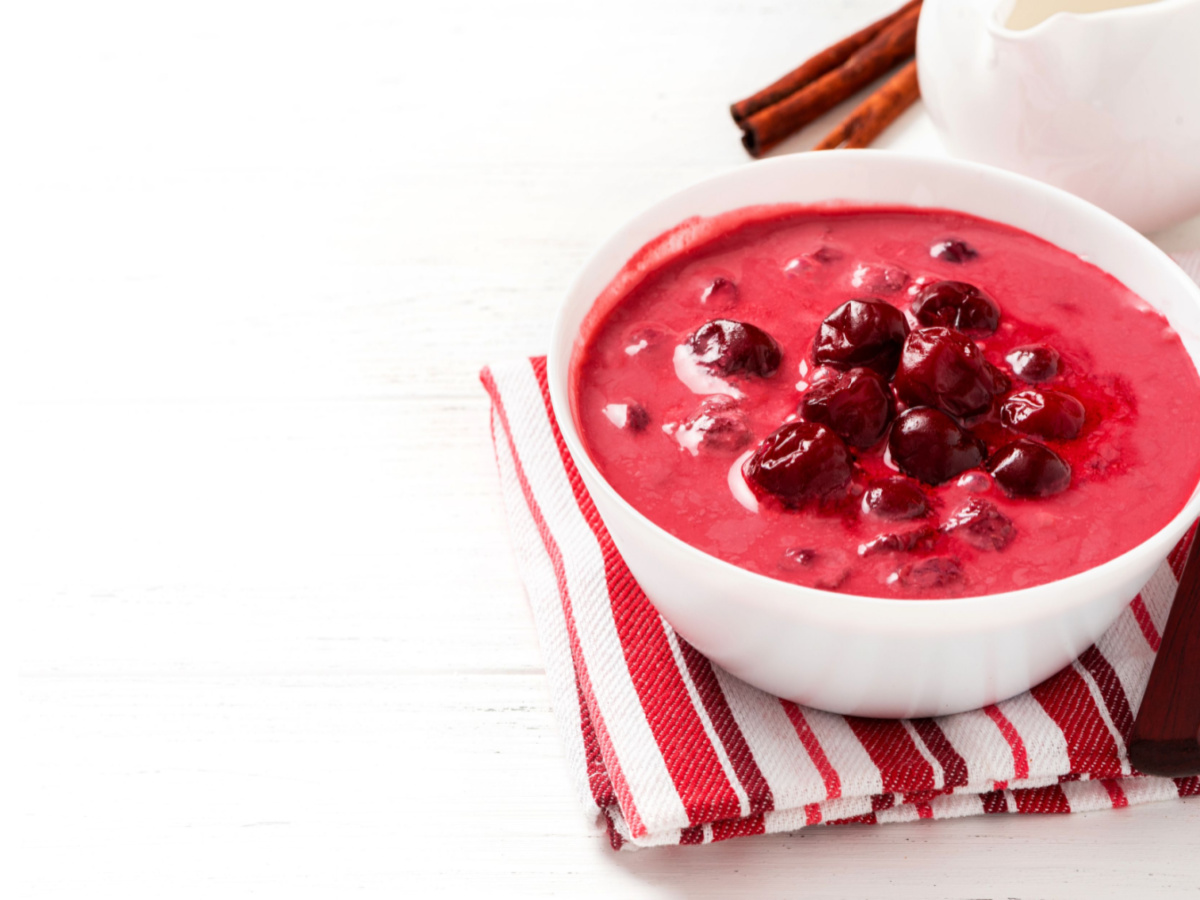 Fruit soup: it’s a thing, we swear. We’ve seen a lot of recipes for watermelon gazpacho lately, and in Norway, søtsuppe, a dried fruit soup, is often eaten at the holidays. Meggyleves is a cherry soup, and it’s an iconic summer dish in Hungary. This version uses sweet bing cherries paired with sour cherry juice instead of sour cherries, which are typically harder to find. Feel free to swap the sour cream suggested in this dish for Greek yogurt, which is higher in protein and lower in fat — and if you want to add a half cup of red wine at the end, that’s a pretty traditional and tasty choice, too. 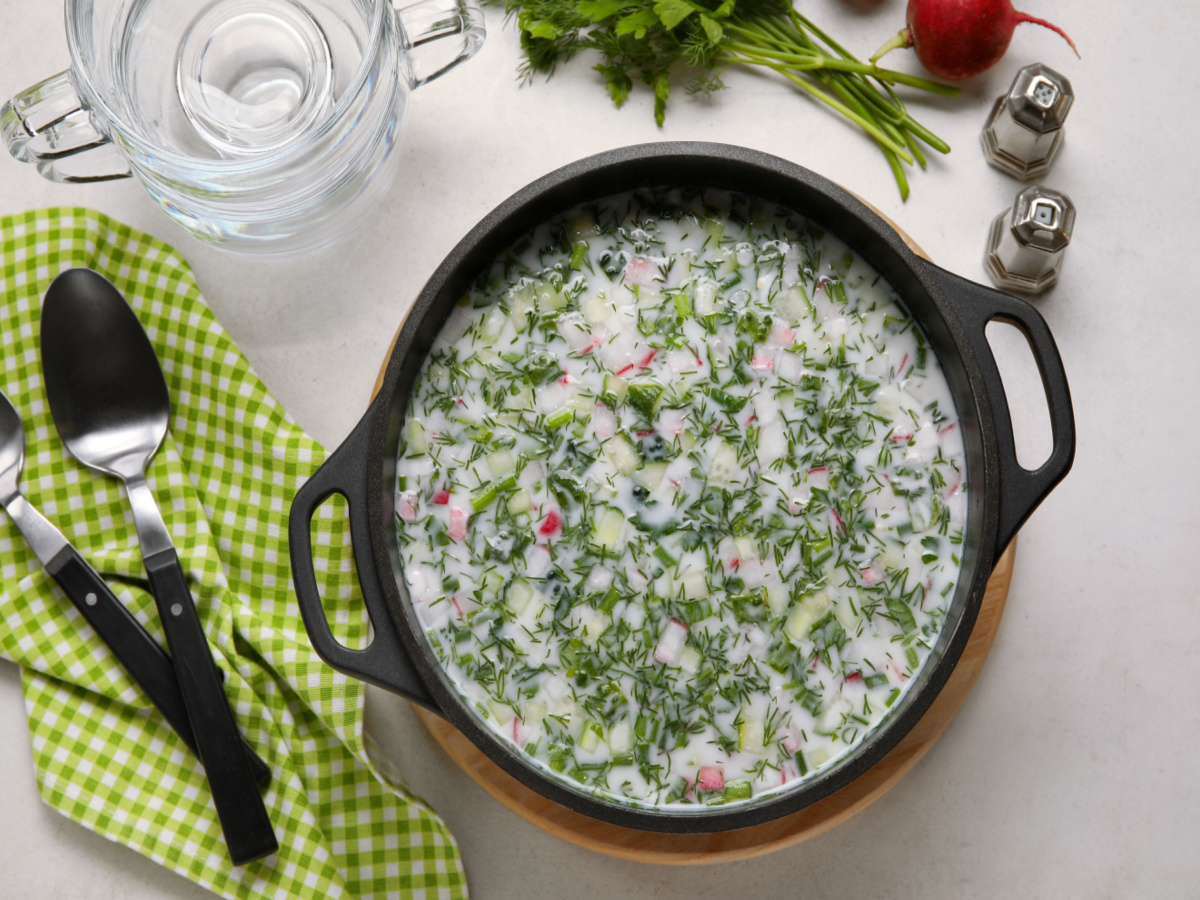 One of our favorite cold soup recipes, okroshka makes great use of fresh, seasonal vegetables and herbs, as well as satiating, high-protein ingredients like eggs and chicken. Originally made with kvass, a fermented rye drink, this and many other modern versions of this traditional Russian soup now rely on kefir or Greek yogurt instead. This is a really filling, hearty meal that’s still perfect for swelteringly hot days. 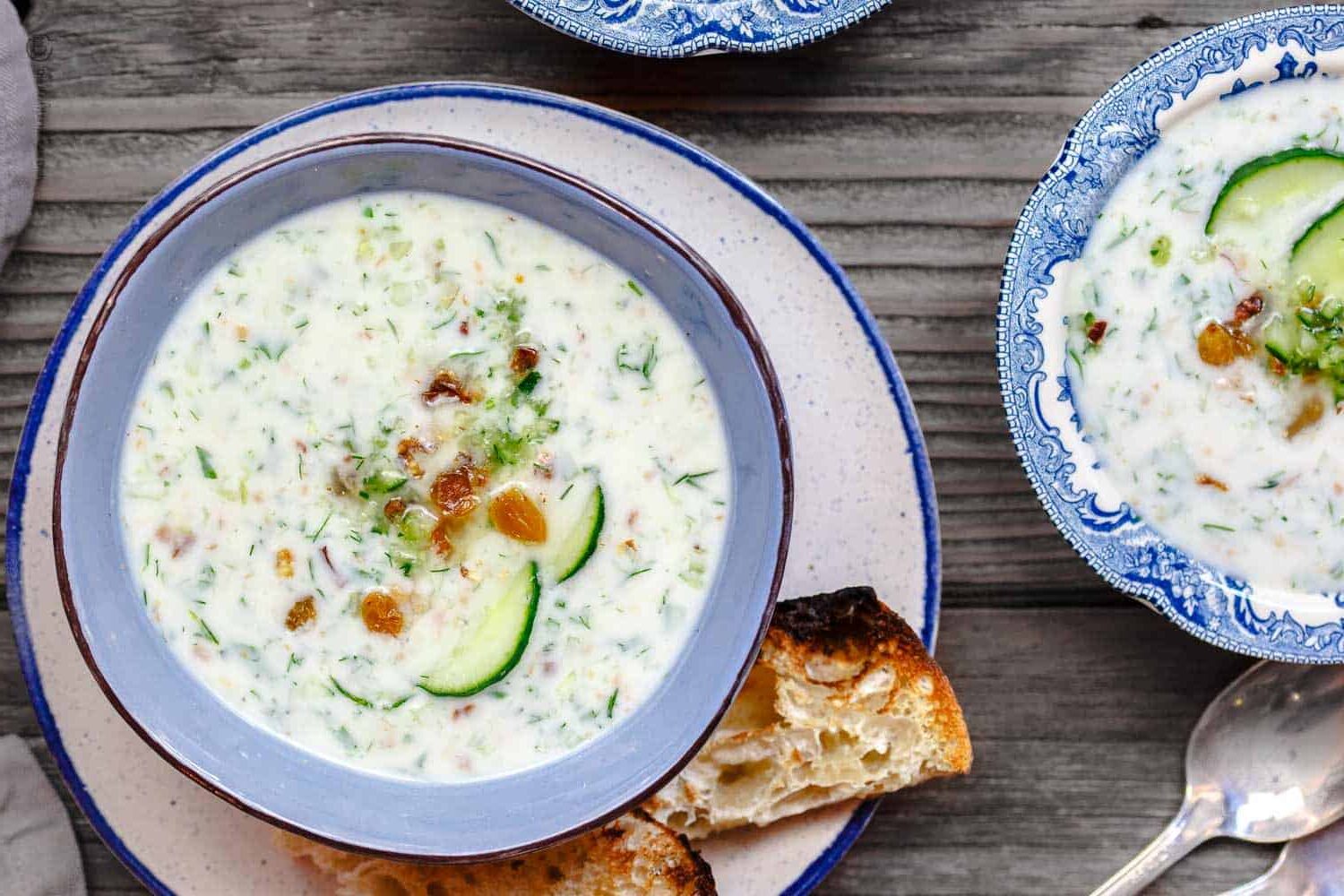 The ingredients list for this cold soup recipe is fairly similar to Bulgarian tarator — they’re both cucumber-and-yogurt soups, after all — but since the spicing is so different, we believe both soups deserve a place here. The probiotic-packed yogurt is great for your gut health, and the delicate flavors of this version really let more subtle spices like sumac shine through. Although this recipe does not call for them, most versions of this soup incorporate some dried rose petals on top, which we think adds a lot of traditional Persian flavor to this dish, and makes it unique. (They’re available on Amazon for ten bucks, and we think they’re worth it if there’s room in the budget.)