The Best Subscription and Delivery Services for Seafood Lovers 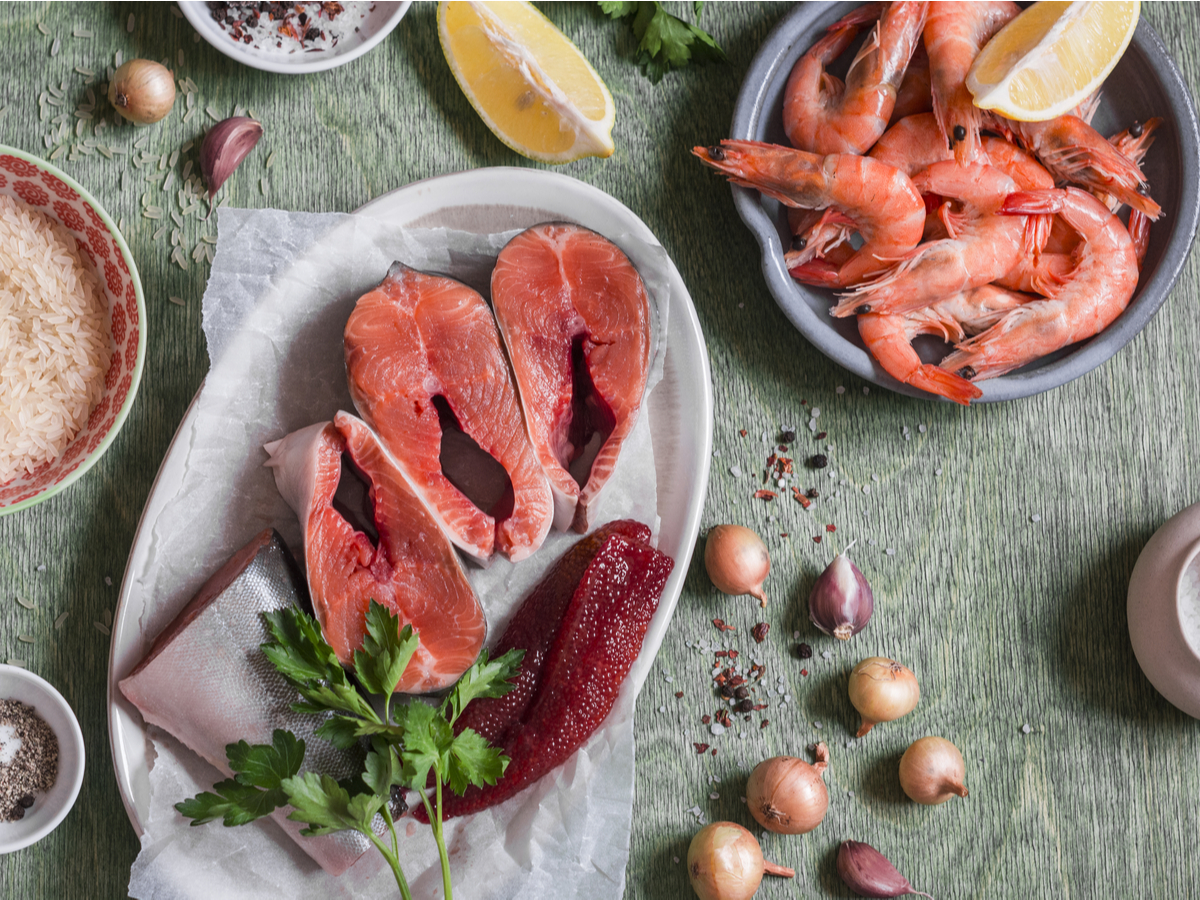 We only recommend products we seriously love and want to share. We may receive a portion of sales from products purchased from this article, which includes affiliate links.

The best thing about being a seafood lover is that seafood loves you back. Most guidelines for healthy eating promote eating plenty of fish, even if they eschew other meats. Those cultures that are well-documented as having the healthiest humans — Scandinavia, Japan, the Mediterranean, for example — all include plenty of seafood in their cuisines.

Liz Weiss, MS, RDN, and host of the “Eat, Drink, Live Longer” podcast, explains why fish and shellfish are such wellness powerhouses. “Seafood is packed with great nutrition. It’s low in saturated fat, and provides important nutrients like omega-3 fatty acids, which are good for heart health and brain health,” she says. “It also provides minerals like selenium and zinc, which are important for a healthy immune system, and it’s one of the few foods that actually provides Vitamin D. Most people don’t eat anywhere near the recommended amount of seafood, which is about two to three servings, or eight ounces, per week.”

Read next: 6 Delicious Ways to Use Inexpensive, Heart-Healthy Canned Fish

So what about all this talk of mercury in seafood, then? Is it possible to increase our seafood consumption without taking on additional risk? “We do ourselves a disservice when we eliminate an entire food group when there’s really just seven fish the FDA and EPA suggest we avoid when we’re pregnant,” says Weiss. “The benefits of eating seafood far outweigh any mercury risks,” she says, and especially when most of us aren’t eating nearly enough. The seven fish to avoid are big predator fish, whose mercury levels multiply because they feed on other fish: shark, swordfish, king mackerel, tilefish, marlin, bigeye tuna, and orange roughy. Otherwise, the FDA categorizes every other edible fish and shellfish into “best choices,” and “good choices,” which feels a little like everyone getting a participation trophy, but as avid consumers of seafood, we’re here for it.

With that in mind, it’s never been a better time to be a seafood lover, as a rise in subscription and delivery services has made it possible for seafood of exceptional quality to get from the dock to your door in record time, regardless of where you live in relation to a coast, and without having to guess whether your seafood has been responsibly handled. Most of these organizations utilize a flash-freezing method within hours of catch or harvest, ensuring freshness. Furthermore, all have great transparency regarding sustainable and ethical fishing practices, meaning you can feel even better about loving seafood while sparing yourself the moment at the supermarket where you wonder about the pedigree of what you’re buying. Here are eight of the best subscription and delivery services available for seafood lovers to consider:

Best for Box to Broiler: PureFish

PureFish began over 15 years ago as a seafood supplier for restaurants whose clients included Michelin-starred and James Beard award-winning organizations, meaning their center-cut portions have already passed muster for freshness, flavor, and appearance by the most discerning chefs around. PureFish curates numerous available boxes of 16 portions each, meant to meet healthy seafood consumption needs for about two to four people monthly, while minimizing the use of shipping materials — and you can just re-order as needed. Each tray of two portions apiece is composed of aluminum designed to go right from your fridge or freezer to the oven, with little handling of the fish itself. QR codes on each package allow you to connect to the individual fishing organizations and learn about their practices, and finally, your purchase through PureFish helps to support the Ocean Cleanup project, which all adds up to good news for your heart in more than just one way.

If your love of seafood extends to daydreaming about early mornings on the docks while fishermen bring in their hauls, consider a box or subscription from Fulton Fish Market, a cooperative of family-run fishing companies, and one of the oldest seafood purveyors in the U.S. Because they purchase daily only what is needed to fill orders, they’re one of very few companies who offer the possibility of shipping fresh, rather than frozen. You can either design your own weekly, bi-weekly, or monthly subscription boxes, or let them curate from their best catches of the day, with the added bonus of opting in on whole fish. (Coming soon to a grilling season near you.) The occasional high-mercury item such as swordfish might make an appearance, but again, unless you’re pregnant, it’s not a concern as an occasional indulgence.

Best for Surf and Turf: Sizzlefish

Appropriate for a seafood delivery company committed to the idea “eat well and live better,” the inspiration behind Sizzlefish began during a triathlon training run by its founder. The organization had previously supplied seafood to natural and premium grocery stores, but saw an opportunity to make high-quality seafood available directly to consumers, cutting down the time between sea and seasoning. Sizzlefish offers everything from one-time purchases of a single item, to recurring subscription packages, to boxes curated for particular programs such as paleo or Whole30. Need flavor inspiration? Sizzlefish provides pre-seasoned options such as Korean BBQ and Thai Curry salmon, in addition to certain smoked selections. If your sizzle needs this season also include some turf to go with your surf, Sizzlefish also offers several cuts of grass-fed, hormone-free beef.

If it seems too good to be true that a luxury item such as lobster can be a regular part of healthy eating, it’s not. “Lobster is another treasure trove for nutrients and often gets a bad rap because of the company it keeps: Butter, mayonnaise, rolls, etc.,” says Weiss. If you need more convincing, lobster even has a spot on the FDA’s “best choices” list where mercury is concerned. If you’ve ever felt dubious finding your lobster from a grocery store tank, Lobster Anywhere aims to be your lobster matchmaking service, with their hand-selected, wild-caught products that arrive at your door via next-day delivery. Offerings include live lobsters, as well as lobster tails, lobster meat, and other quality shellfish such as shrimp and scallops.

Turns out there actually is truth to this myth: “Oysters bring lots of good nutrients to the body, especially zinc,” says Weiss. “We always hear about oysters being an aphrodisiac food, and zinc is important for the production of our sexual organ development.” So… in addition to this, um, “enhanced” benefit, oysters can also have a regular spot on the table for being full of protein and nutrients, and low in saturated fat and mercury. Real Oyster Cult is your at-home oyster bar, sourcing oysters from over 90 farms in North America. You can order as needed for your at-home happy hours, or opt-in to their monthly “cult membership” for regularly scheduled happiness.

It is possible to be a bonafide seafood lover but still prefer the milder-tasting fishes. So, white fish lovers, rejoice: While most curated seafood subscription boxes seem to always include the most popular pink fishes such as salmon and tuna in their lineups, Oceanbox curates an ideal selection for those with a paler-leaning palate: their White Fish Box includes portions of chef-quality black sea bass, bronzini, cod, halibut, red snapper, and sea scallops. Their procurement and shipping process promises that your seafood was in the ocean just 2 days prior to when you received it.

Sea to Table is a family-owned business with a mission to get Americans to “eat better fish.” To this end, they work closely with U.S. fisheries from Florida to Alaska to source the best, most responsibly-sourced seafood selections. A traceability label on each package includes where your seafood was caught, by what method, and a best-by date for quality. For a taste of the vast diversity that American waters offer, try their Pescatarian Pack, which includes 16 portions of flash-frozen fish and shellfish from nearly every corner of the coastal U.S. Boxes may be ordered as-needed or by subscription, and additionally, Sea to Table offers seven varieties of tinned seafood, which is not to be underestimated in its nutritional benefits, according to Weiss.

As a seafood lover, it can be challenging to keep track of what you should or should not be eating where sustainability and ethical practices are concerned. This is precisely the basis on which KnowSeafood was founded, in order to establish consumer confidence and trust about their seafood selections. Certain species benefit from aqua-farming, but KnowSeafood also maintains a Wild Caught collection if it makes it simpler for you to feel good about what you’re getting. They also champion underutilized seafood such as monkfish, lingcod, cobia, and kanpachi to combat overfishing tendencies, and what’s more, they check every catch for mercury levels before approving it for packaging.