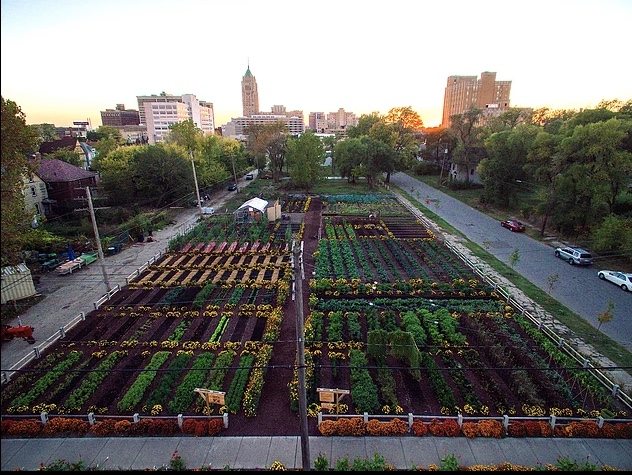 Across the country, urban agriculture has taken root in neglected neighborhoods where abandoned lots were once more likely to sprout tires and trash piles than compost heaps. Between the bean rows, these grassroots urban farms are sprouting solutions of food security and social justice.

“The act of cultivating crops, along with the community activities that take place within these spaces, can make a difference by giving people greater control over the food system and by demonstrating how political, economic, and social patterns that perpetuate inequality can be weeded out,” wrote Nevin Cohen and Kristin Reynolds, authors of 2016’s Beyond the Kale: Urban Agriculture and Social Justice Activism in New York City.

“Bringing these patterns to the surface is one of the most important contributions urban agriculture can make to improving the food system—not only for locavores, but for all those who need to eat.”

From small plots to full-blow urban farms, here are some of our favorite urban agriculture projects working to nurture healthy communities.

Since it planted its first seeds five years ago, the nonprofit Michigan Urban Farming Initiative or MUFI (pictured above) has transformed a small community garden into an abundant and productive green space in Detroit’s North End. The two-acre farm grows more than 300 types of vegetables and has provided more than 50,000 pounds of free produce to more than 2,000 households within two square miles. This spring, 200 cherry, plum, pear and apple trees will burst into blossom.

MUFI has made the most of existing infrastructure as they have grown, waterproofing the foundation of a razed house for a rainwater cistern and utilizing a former commercial building as a retail store for pesto and tomato sauce. Now in the works is a 3,200 square-foot resource center that will house educational programs and two commercial kitchens to serve a for-profit farm-to-table cafe.

“MUFI has truly rooted itself within the local community,” a volunteer wrote on MUFI’s Facebook page. “Seeing the diversity and acceptance represented on the farm today proved that yes, MUFI can provide produce, but it can also serve as a home that stands to educate and empower by growing the local economy and increasing nearby property value. It’s truly an amazing place.” 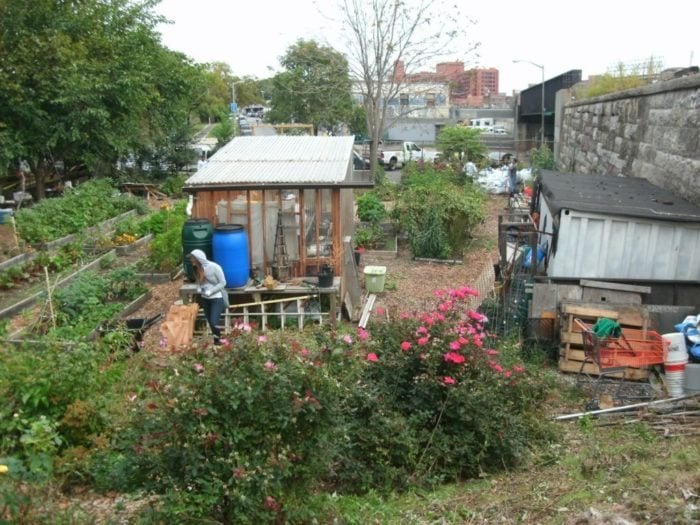 Tucked between a highway ramp and a commuter rail in the poorest congressional district in the United States, 2 ½ acre La Finca del Sur was founded by a group of black and Latina women to provide a safe, empowering space for minority women through economic and food security.

They harvest vegetables that are sold at local farmers markets, educate school groups and neighbors on good nutrition, and host cultural events. Among the growers are a single mom tending lavender for her own line of beauty products, and a family of recent Mexican immigrants who cultivate vegetables for their own meals and their friends.

“When people come to New York, because of economic issues they buy and eat what they can afford,” co-founder Nancy Ortiz-Surun, whose family is from Puerto Rico, told The New York Times. “This, to me, is all about laying down roots. Puerto Ricans have moved so far from that, yet we brought that tradition here. Our grandmothers grew herbs that could heal. We need to show that.” 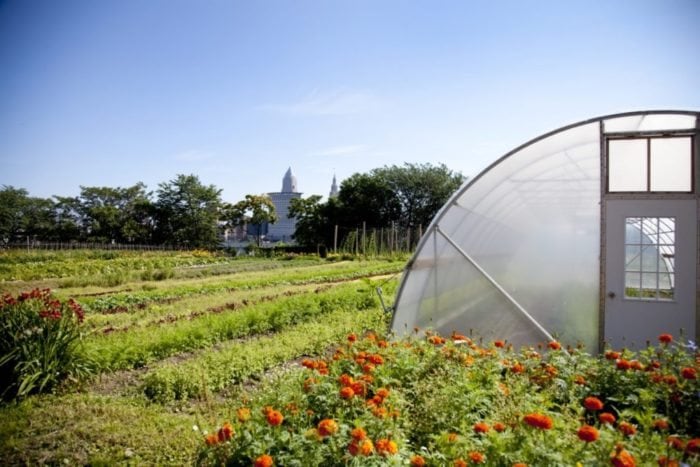 At six acres, Ohio City Farm is one of the largest contiguous urban farms in the United States, and a U.S. Department of Agriculture-recognized model of successful urban agriculture. Among the farm’s tenants is Refugee Response, which runs an employment training program to help the city’s recent arrivals acquire skills to succeed in their new communities by growing and selling organically farmed fresh produce.

The program has assisted people like Pawkee, who fled Burma at 9 and lived in a refugee camp for the next 19 years before landing in Cleveland. Farming was once an important part of her life, and with Refugee Response, she has been able to farm again.

“People who have done something with their hands their entire life—to be able to keep that one bit of consistency is incredibly comforting,” said Maggie Fitzpatrick, director of agricultural empowerment. 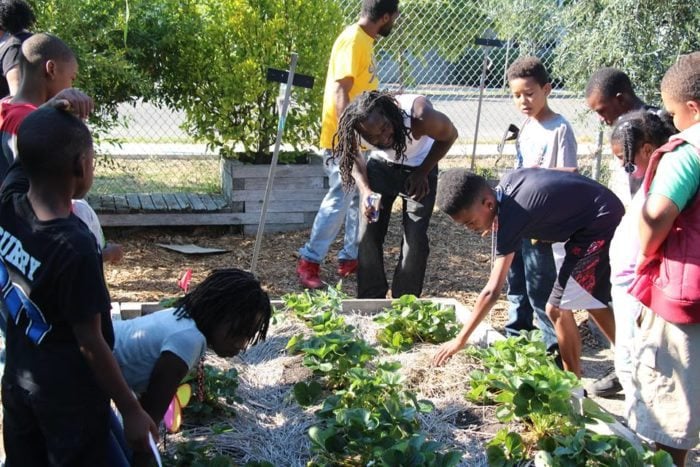 This quarter-acre nonprofit farm in East Oakland’s Tassafaronga Park is planned, planted, harvested, and sold by local elementary and middle school-aged kids. The program’s goal is to introduce students to growing food from seed and contribute to their financial future; 100 percent of the proceeds from Acta Non Verba are deposited into individual savings accounts for those who participate.

“Most of the children here think that food comes from the grocery store,” founder Kelly Carlisle told ABC News. “We’re giving the kids the whole experience, from seed to table, from raw to sandwich… the excitement of seeing these seeds turn into actual fruit is magical for them and they don’t see it coming. The kids go wild.”

Carlisle, a U.S. Navy veteran and East Oakland-native, founded the farm in 2010 after reports named her hometown one of the most dangerous in the country. She wanted kids to be spared her childhood frustrations when play was limited to a one-block radius.

“As Oaklanders, I want them to be forward thinking about their future. I want them to remember this experience as something that at least gave them a window into something better and a different way to live.” 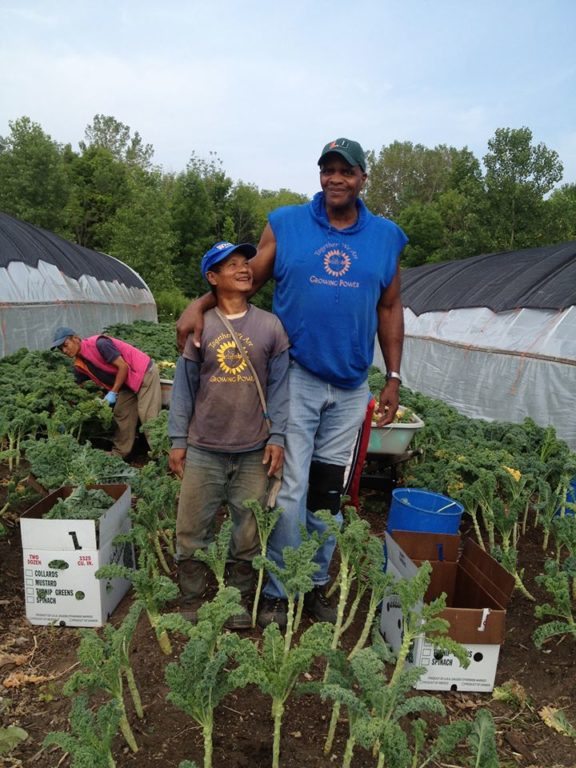 Founded by former professional basketball player and MacArthur Foundation “genius” fellow Will Allen, this nonprofit has training centers throughout the country, but its flagship urban farms in Milwaukee and Chicago have drawn attention since 1993. Six blocks from the Cream City’s largest public housing project is a historic two-acre farm—the last remaining farm and greenhouse operation in the city.

“When people drive by the street and they see the greenhouses on the front, they have no idea that we feed about 10,000 people just from this farm alone,” Allen told the Huffington Post.

And it’s not only produce found inside but the whole busy barnyard, complete with goats, chickens, ducks, turkeys, and bees.

The six urban farms in Chicago claim more than 12 acres of the city, employee teen farmers, provide produce to public housing and senior living facilities and have received national recognition in the form of a visit from former first lady, Michelle Obama.

Growing Power isn’t just about growing food; the group teaches community members how to develop job skills, foster a sense of community, and nurture a feeling of calm and connection that can come through the soil.

“Kids that come in here, they’re wired and they’re bouncing off the walls. But as soon as I put some soil in their hands, they just calm down,” Allen said. “There’s something very spiritual about touching the soil.”

It’s true for Allen, too. “When I touch the soil, I actually feel good. I feel something,” he said. “If you have fertile soil, then your food is going to taste good, and that’s one of the joys of life.”

Bio: Sarah McColl was founding editor in chief of Yahoo Food. Her food writing has been featured in print and online for Bon Appétit, House Beautiful, Modern Farmer, Extra Crispy and others.