It seems we’re finally being as adventuresome with plants as nature has been, with plant-based restaurants, products and festivals sprouting up everywhere. Count chef Marcel Vigneron among those making food designed to appeal to vegans and omnivores alike.

Those who watched Top Chef‘s second season would be hard pressed to forget Vigneron. Cast as that season’s villain, Vigneron created innovative cuisine with a side of drama and eventually won runner-up with his signature blend of confidence, trash talking, molecular gastronomy and talent.

Retired from small-screen drama, Vigneron can now be found starring in a West Hollywood kitchen, with two restaurants opened this year, Wolf and Beefsteak. Wolf is more meat-forward, while Beefsteak (named in a cheeky nod to the beefsteak tomato) is plant-focused, though meat and cheese are still available as sides. Vigneron spoke with Clean Plates about what motivated him to create a restaurant with a plant-based menu, the reason behind including meat and why he thinks plant-based dining is on the rise.

Clean Plates: When did you get the inspiration to have a more plant-focused restaurant like Beefsteak?

Marcel Vigneron: When I turned 30 I realized what you put in your body directly affects your system. Being a chef is very grueling from a physical standpoint—you’re always on your feet, always working really hard. But also we tend to not have the best diets. We wake up really early in the morning, we drink coffee and then we don’t eat anything all day, you taste 15 cream-based sauces and then 5 vinaigrettes and your body’s like, ‘What are you doing to me right now?’ That started to catch up with me so I thought it was time to make a change and I started eating healthier. That’s when I started playing around with the idea of Beefsteak.

I also took a job with some friends of mine who are focused on lifestyle, health and wellness at a company called Summit based out of Utah. We had like 60 employees and about 20 were vegan or vegetarian and all 60 were very health conscious. They really liked my food but at the same time were like, ‘Maybe you can swap the butter with some olive oil and try to make everything as healthy as you possibly can’ and I said, ‘Sure,’ so I made a very conscious switch to make a much more healthy cuisine.

I feel like chefs are nurturers by nature anyway. What we do is cook and feed people all the time so that was already ingrained. As chefs I think we have a responsibility to make things that will make [people] feel good after eating not just during eating.

C.P.: Where did you get your inspiration for Beefsteak’s dishes?

M.V.: A lot of the inspiration comes from just what I like to eat or what I enjoy eating on my day off. I love a good rice bowl or salad, like the Sunflower Caesar Salad (below). There are so many different colors and flavors of vegetables you can play with. With meat you have just a couple textures and colors, mostly being brown or red, whereas with vegetables you have copious amounts of textures and a whole palette of colors.

“We have a responsibility to make things that will make people feel good after eating, not just during. One of the best ways to do that is with a plant-based menu.”

C.P.: Why did you choose to still include meat on Beefsteak’s menu as a side?

M.V.: It’s basically taking the concept of the menu and turning it around: Most of the time, vegans and vegetarians go into a restaurant and have to extract things off the menu, but [I’m] building a menu that’s entirely plant-based and designed for them—which is basically for everybody because everybody can eat vegetables. And then if someone is an omnivore and wants to add a protein, they can do that.

Right now I am working on adding plant-based protein. We’ve been playing around with jackfruit and this really good tempeh. I’m not really that fond of a lot of fake meats. I don’t really like seitan, it’s basically like concentrated gluten and when you eat it, it feels like you ate a cinder block. No offense to anyone who likes it! 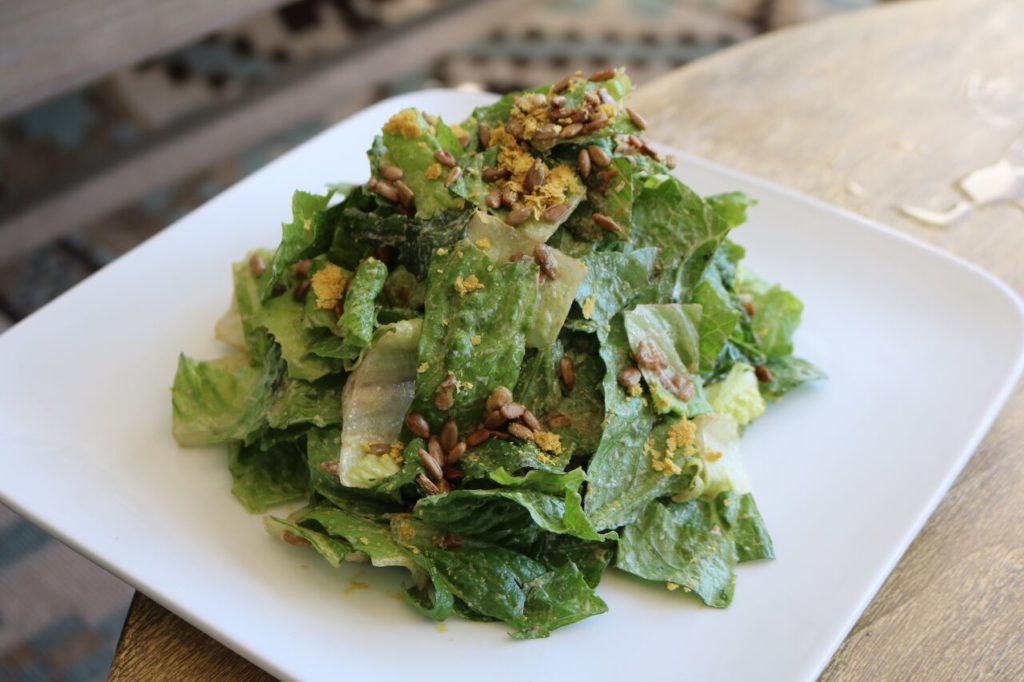 C.P.: How is creating a menu based around plants different from creating more meat-based dishes like those at Wolf?

M.V.: I’m always taking into account something that’s sustaining and fulfilling when engineering dishes centered around vegetables. If it was an omnivore eating it, they won’t necessarily miss the meat. If it’s a vegetarian or vegan eating it they’re going to have all their necessary amino acids, protein from mutual supplementation, a textural extravaganza and delicious flavors. Anytime I design a dish there are several different elements I take into consideration: taste, temperature, technique and texture.

C.P.: Why do you think plant-focused menus are becoming more popular, especially from chefs such as yourself who also cook meat?

M.V.: I’d say because vegetables are so much fun to cook. And when you live in a place like Southern California, we have some of the best vegetables in the world, so why wouldn’t you take advantage of being that close to the epicenter of incredible products?

C.P.:  What are your future plans for Beefsteak and in general?

M.V.: Taking care of the Wolf wife and Beefsteak baby. I think a lot of people expand too quickly—this coming from the guy who just opened two restaurants in six months. I want to make sure these are up and running and successful, my employees are happy, my guests are satisfied. We’ve had offers to do Beefsteaks and Wolf in other areas but you can only do so much. We are working on a cookbook right now for both, we’ll probably do Wolf first.

In a food processor, combine 1 cup sunflower seeds with 2 tablespoons water and puree until the seeds are smooth.

In a large bowl, combine the lettuce with the remaining 1 tablespoon sunflower and the hemp seeds. Drizzle with the grapeseed oil dressing and serve.