When you try to define a “healthy brain,” what probably springs to mind (so to speak) is talk therapy and medication, not nutrition. Dr. Drew Ramsey, a practicing psychiatrist and assistant clinical professor of psychiatry at Columbia University College of Physicians and Surgeons, suggests another approach. A nutrition expert and cookbook author who believes in the powerful healing abilities of a plant-based whole-foods diet, Ramsey is so passionate about kale that he wrote a cookbook about it (50 Shades of Kale) and co-founded National Kale Day (October 5—hope you celebrated it).

Did we mention that he’s also a farmer? In short, this is one doctor with food, well, on the brain. 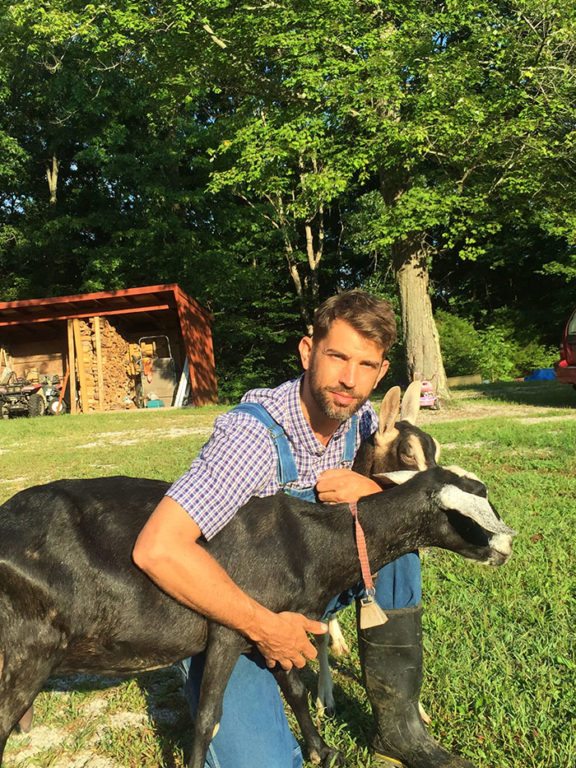 Clean Plates talked with Dr. Ramsey about why eating for brain health is crucial, what’s wrong with the idea of superfoods and why nothing can dethrone kale.

Clean Plates: Your cookbook Eat Complete covers foods that are optimal for brain health. How is that different from eating for heart health, or cancer prevention?

C.P.: What can we do to keep our brains as healthy as possible?

D.R.: It all comes down to a few basic sets of similar rules. We want people eating more rainbows, more colorful plants. An easy way to assess how brain-healthy your diet is, is to look at your plate, and if it’s full of natural colors, you’re taking a good step.

One food category that is missing for most Americans is an increased intake of seafood, particularly fatty fish and bivalves, like mussels, clams and oysters. The brain-health reason that we want more seafood revolves around three nutrients, which are the long-chain omega-3 fats, particularly EPA and DHA. I think a lot of people are confused—they think that chia, kale and flax are great sources of Omega-3 fats, and they really aren’t when it comes to the long-chain Omega-3 fats. Those are the ones we’re after for brain health.

The second nutrient most Americans aren’t getting enough of is vitamin B-12. This vitamin only comes from meat, seafood and dairy, and seafood is an excellent nutrient-dense source, especially mussels and oysters.

And then zinc; about half of Americans aren’t getting enough of zinc on a daily basis. And you find great concentrations of zinc in seafood, particularly oysters.

I have a little mnemonic: Seafood, greens, nuts and beans. Most Americans aren’t eating raw, unsalted nuts, especially almonds, cashews and walnuts. Nuts are important because they are composed mainly of fat and protein, mainly very healthy fat, monounsaturated. Also phytonutrients. Nuts are a wonderful snack food, a good way to exorcise empty carbohydrates from your diet. I prefer raw nuts and seeds, which are fresher. One reason to roast nuts is to make them more shelf stable, but that isn’t necessarily what you want. A lot of foods that are good for our brain health don’t last very long.

C.P.: Are anti-inflammatory foods important? Which ones are particularly good and why?

D.R.: Inflammation is our body fighting against environmental and dietary stressors and attempting to maintain homeostasis. Overall, anti-inflammatory foods really guide us toward a diet that is composed mostly of plants, of foods that don’t stress or tax our system. There are two ways that foods do this. One is through burdening the body with excess simple sugars and empty calories. So we get the fuel but we don’t have the nutrients necessary to burn that fuel, so one way to think about it is that we’re overloading our body with cellular exhaust.

Turmeric gets a lot of press, for example, but there’s nothing magical about turmeric. It activates some anti-inflammatory pathways. That’s great. But instead of a singular superfood or specialty food, what’s a much more powerful intervention is to eliminate the “toxic” foods from your diet, the highly processed foods that are very hard on the body. Whether you eat turmeric or not is less important than whether you eat Twinkies.

CP: How much of brain health is tied to emotional health?

If you got rejected from your dream college, or you got fired from your job, you’re going to wake up in a bad mood or a little emotional, no matter what you ate for dinner. You’re going to have a tough morning. The way we think food relates is really around the depth of that low mood and the ability for you to bounce back. Some of that is certainly psychological. But also at the foundation is having a well-nourished brain.

A large percentage of Americans are missing some of the most key nutrients for their brain health. That was one of the most surprising parts of researching Eat Complete, seeing the sad state of overnutrition in America. We are overfed and undernourished.

C.P.: You’re obsessed with kale. When you hear people say, “Cauliflower is the new kale” or something else is the new kale, is it? Or is kale’s nutrition profile really different from other vegetables?

D.R.: Does it matter if you’re eating kale or purslane or bok choy, no. I’ve evolved with this. I was very concerned initially as an anti-kale movement began to take hold. Kale won’t kill you; there isn’t a single documented case of anyone’s thyroid being damaged.

In terms of foods wanting to be the new kale? I love that. You really think kelp is going to be a flavor at Pinkberry or on the menu at McDonalds?

Kale’s a four-letter word. Cauliflower’s never going to fit on Beyonce’s T-shirt. Broccoli has held the mantle of America’s healthiest vegetable for years. But broccoli chips? Not gonna happen. Broccoli cocktails? Haven’t seen those. And yet I’ve mixed hundreds of kale cocktails at this point.

None of the other vegetables meet all the rules of kale. Those rules are nutrient density, accessibility and culinary versatility. Kale is an amazing food and it’s taken the wellness world by storm. It has more nutrients per calorie. You can be incredibly creative with it. My book has everything from amazing smoothies to interesting appetizers to cookies and cocktails.

I think it’s fun watching the other vegetables chase kale. No one’s gotten close, and I don’t think anyone will. Kale has hit a level of celebrity that no other vegetable has ever achieved. Nothing has really captured the public’s attention about a vegetable like kale. “Eat more kale” is a very simple directive that would turn around the health of a lot of folks.