Here’s an experiment for you: Ask a friend if they’ve tried Bulletproof coffee. Most likely you’ll get one of two responses. Either an expression of pure bliss with an “Oh yeah, it’s amazing,” or a wrinkled-nose confused look and, “Is that the thing where you put butter in your coffee? Weird.”

No matter where you stand on fattened-up coffee, no doubt you’ve heard about it. (It’s been endorsed by everyone from doctors Mark Hyman and Christiane Northrup  to actors like Shailene Woodley and Brandon Routh.) The trendy coffee is the gateway drug into the world of “biohacking,” the practice of employing both ancient and ultra-modern techniques, including nutrition, technology, and in some cases, lab science, to generate more energy and boost the body’s performance.

Dave Asprey is the pied piper of biohacking: He introduced many to the concept in his bestselling books The Bulletproof Diet and Bulletproof: The Cookbook. 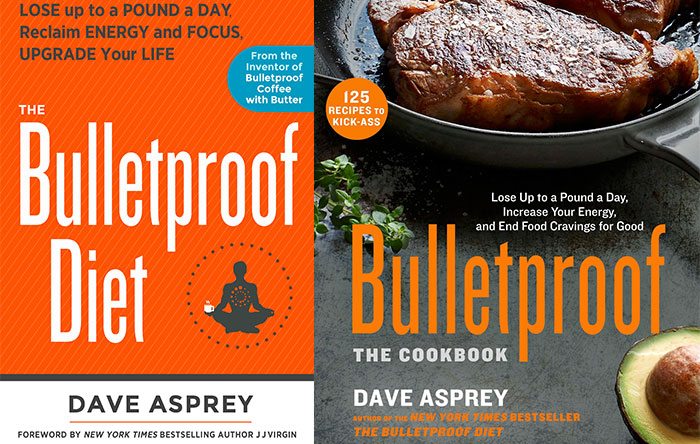 Asprey has expanded his reach with two Bulletproof Café in Los Angeles and a host of nutrition products, supplements and gadgets. He also has a new book coming out next spring focusing on how to optimize cognitive performance and energize your mitochondria, parts of cells that take in nutrients and metabolize them to create energy.

He sat down with Clean Plates during his recent Bulletproof Biohacking Conference in Pasadena, California, to talk about how Bulletproof is different from Paleo, neurofeedback, gratitude, and of course, coffee.

Clean Plates: The Bulletproof Diet shares some of the basic principles that the Paleo diet espouses, but it isn’t the same as Paleo. Can you explain the major differences?

Our ancestors ate what they had. They did not have microscopes, mass spectrometers, epidemiology, or the Internet. So they weren’t as good at research. But they could definitely tell you what didn’t kill you very quickly. They could tell you, “This will kill you quickly,” they couldn’t tell you, “This will kill you slowly.” Because as long as you reproduced, you were ok. The whole goal of Bulletproof is to completely exceed those limits. My stated goal is to live to 180 years old, or longer, and I don’t think it’s an unreasonable goal, because I’m not going to do what the cavemen did. I’m going to do the things that I can measure and identify as working the best. I can do things to coconut oil that cavemen could not do. They didn’t have Brain Octane. But I do. Things like that are meaningfully different.

From a choice perspective, Paleo tends to have too much meat, and too much protein is not good for you. I would say eating low protein is not good for you either. So Bulletproof is a moderate-protein diet. It’s also a lower-toxin diet. One of the things Paleo does accidentally is eliminate mold toxins, because grains tend to have most of these mold toxins that directly damage mitochondria, the power plants that make us who we are. What if you intentionally eliminated the other foods that contain mold, which is a big part of Bulletproof? And it’s not just mold. I look at all of the sources of anti-nutrients that affect some people and don’t affect other people.

So I have a lot of respect for the Paleo diet, and the primal diet. Mark Sisson is speaking at the conference here. So we’re all in the same tribe. We’re all working to get people eating healthier things, but with the perspective of, let’s do it as perfectly as we can with every tool at our disposal—that’s not what cavemen did.

CP: What are the biggest mistakes you see people making in their diet?

DA: One of the biggest mistakes that people make when they go Bulletproof is they say, “Oh, ketosis is amazing, so I’m going to do it nonstop.” And the Bulletproof diet is a cyclical ketosis diet. There are some people, including some of my friends, who go in ketosis and stay in ketosis forever, and it works really well for them. There’s nothing wrong with doing that, but one of the biggest mistakes I see is people who say, “I do something, and I feel really good, so I’m going to do that religiously and forever.” And if you want to feel really good, become a raw vegan—you’ll feel great for a month. Do it for 3 or 6 months, and you might not like what happens to your biology, and it may be hard to climb out of the hole you put yourself in.

The same thing can happen for some people—but not all—in ketosis. There is no harm that I can see in coming out of ketosis on a regular basis and going back in—it teaches metabolic flexibility. Don’t just go low carb all the time. Come out of it, even just for a day, every now and then, and you will have more of the building blocks that help your immune system function, that help your thyroid function, and things like that.

CP: You’re trying new things all the time. Anything new in the last six months or so, any new habit, that’s had a particular impact on you?

DA: There are two things that really stand out. One is the new 40 Years of Zen, the new technology that we developed that has really shifted my brain. Even after years of doing it with a very powerful technology before it, I just feel like we made a quantum leap there. I’m feeling an ability to handle and manage more. My sense of groundedness and my sense of stress is just not there.

I have a new New York Times’ bestseller coming out—I like to think that way, anyway—and I’ve been writing that. And when I was right in the middle of a deadline, I was like, “Yeah, I’ll go to Burning Man, sure, why not?” Just to be able to handle it with no stress and no fear, and just to have this sense of effortlessness in almost everything I do, that has shifted from this new technology.

The other thing that’s made a big difference is that I did a couple of stem cell procedures this year. This is really cutting-edge stuff. That’s also been a really powerful thing. It does core rejuvenation things that I think are groundbreaking and I expect that to sweep the world over the next few years as people realize what’s possible. It’s going to put a lot of surgeons out of business, though.

I’ve injected it into my brain; I’m only the second person ever to do that prophylactically. But when you do it intravenously, the stem cells go to sites of inflammation and then rebuild tissue so that they’ll stop being inflamed. That’s amazing. I even look different this year because I did stem cells into my face. Lots of people have been coming to me online and people who I know have been saying, “You look younger this year.” I’m pretty sure the stem cells played a role in that, along with some light therapy stuff we’ll be talking about [at the conference] as well. But between the stem cells and the neurofeedback, it’s been a good year.

CP: We’d like to ask you the same question you ask your guests at the end of the Bulletproof Radio podcasts: If someone came to you tomorrow and said, “I want to kick more ass at life, what are the three things I should do that will help me the most,” what would you say?

DA: One of the biggest things that matters has nothing to do with food, or anything like that. It’s actually forgiveness. The reason for that is that every time someone offends you or does something that you find offensive or hurtful, or that stimulates negative emotions in you, it extracts a biological cost from you. And it keeps doing that; it’s like you’re carrying someone else’s baggage. And when you master the power to forgive something and actually let it go—not to tell yourself that you’ve let it go, but to actually let it go—then it frees that energy up so you can actually do something useful with it.

And the other reason that forgiveness is on the list is that forgiveness opens up the pathway to the second thing that would be on my top three, which is gratitude. The reason for this is that when you authentically forgive something, you’ve let go, you have more energy, and you stop telling yourself stories about things that happened, because you don’t have an incentive to do that. In order to authentically forgive something, though, you have to have a sense of gratitude.

So I teach my kids every night this basic gratitude thing. I say, “Hey guys, what are three things that you’re most grateful for that happened today?” And here’s the thing: They could have had the worst day a 7-year-old could ever have. But as soon as they just sit there and ponder for a second, and think of what they’re grateful for, they shift from “I’m whiny” to “I’m going to sleep well. And I’m safe and comfortable and happy.”

As adults, for us to actually forgive something or someone, the first step is actually to be grateful for something. Gratitude is a core part of being Bulletproof. So if you go through life every day and you don’t do anything else Bulletproof and you just every day when you wake up or when you go to bed, you say, “You know, here’s three things I’m grateful for today. I’m grateful that at least the tree didn’t fall on my house and my car,” it just reframes the situation from “Oh my God, it’s the end of the world, a tree just fell on my car,” to “Wow, I’m actually grateful for that.”

The third one would just be, set up the environment around you, and that includes your food, your air, your light, and all the things that influence you, so that you have the most energy to give back. If you set up an environment that is the most comfortable but that doesn’t give you the most energy, you’ll have less energy to enjoy your life. The most important thing you can do there is be grateful for things, make sure you forgive things often, and make sure you set up everything else in your life so that you’re full of energy. If you do those three things, you’ll pretty much kick ass at everything you do.