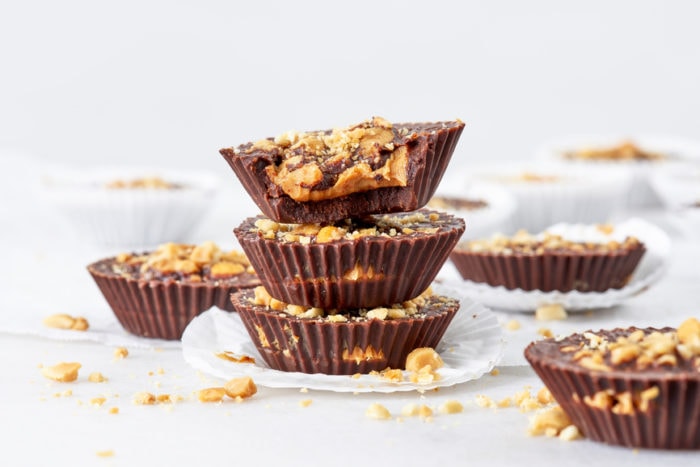 Sugar alcohols can be an appropriate sugar substitute while on a keto diet. However, some sugar alcohols may impact blood sugar and knock you out of ketosis.

There are many hurdles to navigate when you’re on a low-carb diet like keto. But even on the keto diet, it’s important to personalize your diet to what works best for you. Your ideal meal plan should not be the same as your neighbor’s.

What is keto, and why do sugar alcohols matter? The ketogenic diet limits your carb intake (which traditionally turns carbohydrates into glucose for energy) in such a way that your blood sugar never spikes throughout the day.

After several days with very few carbs and a high amount of fat, your liver begins to produce ketones, a more efficient form of energy. When you get your energy from ketones, rather than glucose, you are in a state of ketosis.

However, if your net carb count goes above a certain limit (usually anywhere from 20-50 net carbs per day, depending on the person), your blood glucose will spike too high for your body to transition to ketone-based energy.

Artificial or natural sugars can kick you out of ketosis. Two tablespoons of sugar alone can tell your body it has enough glucose to stop producing ketones, thus kicking you out of a state of ketosis.

While sugar alcohols are not the same as sugar, some will still create an unwanted impact on your blood glucose levels and disrupt ketosis.

For many people on the keto diet, sugar alcohols are an appropriate low- or no-carb substitute for sugar. Every person — and every sugar alcohol — is different, but some sugar alcohols, like erythritol, can sweeten your food or drink without raising your blood sugar.

What are sugar alcohols?

Sugar alcohols are low-calorie sweeteners that have molecular similarities to sugar and alcohol. They are also known as polyols. They aren’t artificial sweeteners (like sucralose or aspartame) because they’re found in nature.

Sugar alcohols are not always as sweet as sugar, and they don’t contain ethanol like alcohol (translation: they won’t get you drunk, no matter how much you consume). They have fewer calories per gram than either sugar or alcohol.

They are less digestible than sugar, which is why sugar alcohols typically have a smaller impact on blood sugar than other forms of carbohydrates.

Some sugar alcohols offer significant health benefits, the most popular being cavity prevention.

Because their molecular structure is similar to sugar’s, you can find sugar alcohol sweeteners in both liquid and solid beverages and food items. Some of these sugar alternatives are also available in granulated form.

Erythritol is the most keto-friendly sugar alcohol because it only has 0.2 calories per gram and a glycemic index of 0-1.

Sorbitol has the most calories of the sugar alcohols, while maltitol has the highest glycemic index.

Because each sugar alcohol contains a different amount of calories and has a different glycemic index, subtracting all sugar alcohols from total carbohydrate count is not an accurate way to measure their impact on ketosis.

Do you count sugar alcohols as carbs? Ultimately, you can subtract all sugar alcohols except maltitol from total carbs to calculate your net carb count.

Sorbitol, isomalt, and xylitol are somewhat keto-friendly, but should be consumed in moderation as they may impact blood sugar more than erythritol, lactitol, and mannitol.

There are 7 sugar alcohols frequently used in foods and drinks:

Because sugar alcohols have fewer calories than sugar, switching out sugar for sugar alcohols may contribute to weight loss and a maintained state of ketosis.

Sugar alcohols are used in “sugar-free” ice cream, chewing gum, yogurt, salad dressing, low-carb drinks… if you have a favorite sweet treat, chances are there’s a low-carb version of it sweetened with sugar alcohols.

Erythritol is essentially a zero-calorie sugar alcohol sometimes found in fruits and fermented foods, making it the best sugar alcohol for keto. It’s usually synthesized by fermenting glucose from cornstarch.

Erythritol is fully absorbed in your small intestine.

Erythritol is 70% as sweet as table sugar (AKA sucrose) and comes in at less than 1 on the glycemic index.

When you’re on keto, you can subtract erythritol to calculate net carbs, as it contains so few calories and is so low on the glycemic index.

Isomalt is a sugar alcohol often used in sugar-free candy. This sugar alcohol, derived from beets, is created in a two-step process in which sucrose is transformed into isomaltulose.

It contains 2.1 calories per gram and has a glycemic index of 9.

On a keto diet, consume isomalt in moderation — its calories and elevated glycemic index make it slightly more likely to interrupt ketosis.

Lactitol is a less common sugar alcohol used as a sweetener or sometimes for its laxative effect. Lactitol is derived from lactose (milk sugar).

There are 2.4 calories per gram in lactitol and it sits between 3 and 6 out of 100 on the glycemic index.

Its glycemic index is low, so it may or may not greatly impact blood sugar. But because its calories per gram are higher, lactitol should be consumed in moderation on keto.

Maltitol is the sweetest of the sugar alcohols, yet it may help prevent tooth decay. It is often synthesized by hydrogenating maltose.

Maltitol has about 2.1 calories per gram and its glycemic index is between 35 and 36.

Maltitol syrup is different from plain maltitol and is created by hydrogenating corn syrup. Maltitol syrup has more calories (3.0, 75% of table sugar) and a higher glycemic index (48-53).

Brand names of maltitol include:

Maltitol is up to 90% as sweet as sucrose.

It can spike your blood sugar levels, so you should not subtract maltitol to calculate your net carb count on keto.

Mannitol is one of the most common energy storage molecules found in nature. To synthesize mannitol, manufacturers often hydrogenate fructose.

In mannitol, there are only 1.6 calories per gram. This is the second lowest of any sugar alcohol, making mannitol keto-friendly. It comes in at 0-2 on the glycemic index.

Mannitol is half (50%) as sweet as sugar, though some sources say that it may measure up to 70%.

It’s frequently used as a coating for candies or chewing gum because of its taste, mouthfeel, and resistance to air humidity.

You should be able to subtract mannitol to get an accurate net carb count when you’re on keto.

Also known as glucitol, sorbitol is a common sugar alcohol that your body metabolizes very slowly. It is found naturally in fruits and berries.

For commercial use, sorbitol can be synthesized by reducing glucose.

Sorbitol has 2.6 calories per gram, the highest of any sugar alcohol. The glycemic index of sorbitol is between 4 and 9.

Sorbitol is about 60% as sweet as table sugar.

You can technically subtract sorbitol carbs from net carbs, but it does have a potential to impact your blood sugar because of its high calorie count. For the best results, consume sorbitol in moderation.

Xylitol is, perhaps, the most famous sugar alcohol. Xylitol is used in many sugar-free gums and is popular for its cavity prevention power.

Xylitol occurs naturally in many fruits and vegetables. However, xylitol is often commercially manufactured from corn, wheat, or certain tree barks to use as a sugar substitute.

There are 2.4 calories per gram of xylitol. It has the second highest glycemic index on our list: 13 out of 100 — though some sources claim its GI goes as low as 7.

Xylitol is the sweetest sugar alcohol, at 100% as sweet as table sugar.

It may be safe to subtract xylitol carbs from net carbs, but with a higher glycemic index, this sweetener is another one to consume only in moderation.

What are calories? A calorie is the amount of heat needed to raise the temperature of one gram of water one degree Celsius. A calorie is a unit of energy, an abbreviation for “kilocalorie”. The more calories you consume, the more energy is stored in your body.

Here are the calories, glycemic index, and sweetness of the 7 sugar alcohols:

Side Effects of Sugar Alcohols

Sugar alcohols may cause side effects when consumed in large amounts or for people with IBS. There is also evidence that regular consumption of sugar alcohols can cause problems with your gut bacteria.

Side effects of sugar alcohols:

Most of these side effects occur because sugar alcohols are slow to be digested, like fiber.

Mannitol and sorbitol seem to cause these symptoms most often, while xylitol seems to cause symptoms least often.

Issues with gut bacteria are probably due to the fact that sugar alcohols pass through the small intestine undigested and become “food” for the bacteria in your large intestine, similar to fiber. While this is a positive for the keto diet — no blood sugar spikes — too much of these compounds in the large intestine may negatively influence your gut microbiome.

In other words, it’s a good idea not to consume sugar alcohols on a daily basis to support a healthy gut.

Do not consume sugar alcohols if you have irritable bowel syndrome (IBS). Sugar alcohols are FODMAPs, fermentable carbs that can trigger IBS symptoms.

Warning to dog lovers: Xylitol is toxic to dogs although it is well-tolerated by humans. Unfortunately, a dog’s body confuses xylitol for sugar. This leads to a domino effect that may result in increased insulin levels and low blood sugar, which can be fatal. If you have mischievous canines in your home, it may be a good idea not to keep xylitol around.

When to Talk to Your Doctor

If you are on a ketogenic diet to treat a medical condition, talk to your doctor before consuming sugar alcohols.

If you experience any of the following symptoms while consuming sugar alcohols, seek medical attention:

When you are on keto, sugar alcohols may be a great natural sweetener to add a sweet taste to your low-carb food or drink.

Erythritol, in particular, contains virtually no calories and doesn’t cause an effect on blood sugar.

Be careful not to overload on sugar alcohols, as this can lead to digestive issues like bloating, diarrhea, or a disruption of the gut microbiome.

Overall, sugar alcohols may be an excellent way for you to satisfy your sweet tooth while you adhere to your version of the keto diet.

Looking for a safer sugar substitute? Stevia is a great option — it is sweeter than sugar, has zero calories, and doesn’t cause digestive tract symptoms like sugar alcohols do.

Monk fruit is another safe and beneficial natural sweetener with zero calories and no impact on blood sugar.