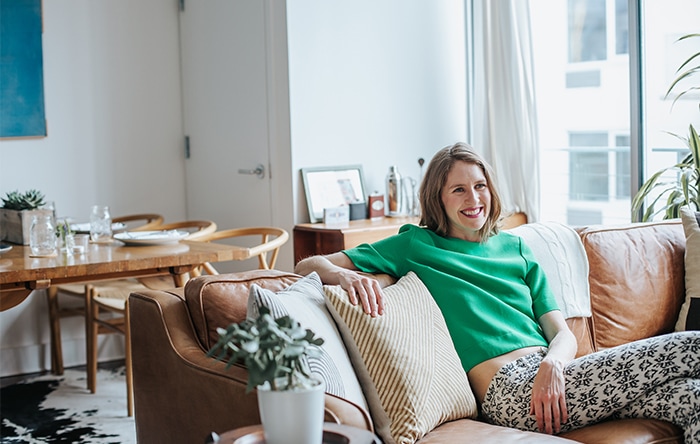 The rash blooming across her nose was not the only sign something was amiss inside Phoebe Lapine’s body, but it was the one that looked back at her in the bathroom mirror. Between the rash, muscle pain, hot and cold flashes, and crushing fatigue, Lapine was fed up with feeling bad.

A diagnosis of Hashimoto’s disease corralled her constellation of symptoms with one explanation—her immune system was attacking her thyroid gland.

Lapine’s doctor suggested a daily dose of hormone replacement therapy, but Lapine, who who had grown up in a homeopathic household, turned to food and other lifestyle changes instead to heal herself.

The chef and food writer’s new book, The Wellness Project, is the result of a year of experimentation with 12 of her own wellness directives—one for each month over the course of a year—to discover which lifestyle changes truly improved her health. Clean Plates spoke with Lapine about her experiences and her best advice for dealing with autoimmune disease.

Clean Plates: What are the most important habits when preventing or treating autoimmune disease?

Phoebe Lapine: Food is huge. It has the power to heal, and can be an incredible agent of change. If you have yet to make any anti-inflammatory updates to your diet, I would start there.

But I will also say that I think people can fall through the trap door of focusing too intensely on diet, and thereby forgetting about all the other elements that contribute to our wellness. Food is more than just medicine. And wellness is more than just food.

Being autoimmune means you’re a highly sensitive person. Every toxin, every ounce of stress adds up. When I was first diagnosed, and started falling down the rabbit hole of healthy living, I let that overwhelm me. But now I see it from the other side. My health is a patchwork quilt of choices. While all the small things do add up, I have to tell myself that no one small choice is going to derail me in the long term. I can pick and choose my own toxic adventure, and the practices that counteract it.

C.P.: Of all the wellness projects, which was the hardest to try?

P.L.: Definitely the first experiment: Giving up alcohol, caffeine and sugar for 30 days. I knew getting rid of my three biggest vices would be the hardest, which is why I tackled them first when my wellness willpower was at its strongest.

As tough as it was to give up all three at once, though, I also recognized that there was a big benefit from doing them in tandem. Without the morning-after exhaustion from a night of drinking or the post-breakfast blood sugar crash from a fructose-laden bowl of cereal, I found I didn’t really need coffee. It also meant I had to find healthier ways to reward good behavior or a hard day’s work than a glass of wine, cookie or latte.

C.P.: Which project made the most impact on your overall sense of wellness?

P.L.: The vice detox had a huge physical impact. But it was also at the very beginning, so I had the most health ground to make up.

Bad skin was my biggest motivator to find a new approach to my wellness. So during this first experiment, the biggest barometer of my success was my face. I took a selfie every morning and by the end of just 30 days, my skin was significantly calmer and on the way to being fully healed. Though I’ve returned to each of my vices in moderation, two years later, my skin has never returned to its previous state of chaos. It took that extreme to give my body a jumpstart, so that I could find a better middle ground going forward.

The experiment that gave me the biggest overall sense of wellness, though, was the last one to combat stress: Creating a morning routine, learning to meditate, and giving myself a brain dump through journaling.

Physical problems are endlessly driven by mental ailments and vice versa. Sometimes it can be hard to tell where the screw is loose, upstairs or down. But I think we often don’t recognize the emotional sources of physical pain. Especially for autoimmune peeps, getting your mental game under control is often the final frontier of healing. But it’s also, perhaps, where we should start in the first place.

C.P.: Were there any projects you considered a flop?

P.L.: I tried not to be too gimmicky with my health experiments. I ruled out things that were too extreme or unrealistic. For example, I wasn’t going to throw out my entire wardrobe because the clothes contained toxic dyes.

The only month where I got a little too caught up in trying things for the sake of trying them was the movement challenge. I had been out of the exercise game for a while, and decided to do two new boutique classes each week to see what all my fitness junkie friends had been up to for all these years. They included spinning, barre method, pole dancing, hip hop yoga, trampoline, and dance cardio. Almost all of them were way too intense for me.

As someone with endocrine issues, I would have benefited from more of a slow and gentle return to fitness. But by facing my physical fears, I did successfully jump a few mental hurdles.

C.P.: What were the biggest surprises in your year-long journey?

P.L.: As I connected the dots of my health, I realized how the internal dialogue of doubt I always thought just made me human—the self-deprecation I had mistaken for modesty—was actually causing me the most harm. Discovering that underlying anxiety was behind my back problems, my insomnia, my adrenal fatigue, and perhaps my autoimmune disease itself was a big revelation that came up again and again during my project.

C.P.: When readers who struggle with autoimmune disease approach you asking for advice, what initial lifestyle changes might you suggest?

P.L.: Go on an elimination diet. Hidden food sensitivities are at the root of so many symptoms. Figuring out what triggers them will quiet a lot of the questioning around your diet, and certainly some of the shame surrounding your “shoulds.” It will also put a pin in your overall inflammation by dedicating a month or so to a simpler diet. Again, those extremes are great for jump starting your immune system. Then you can find a more moderate middle ground going forward.

I would also say, set yourself up for success at home so you can find more flexibility out in the world. I did this over the course of my year—putting water filters on my kitchen tap and shower head, detoxing my pantry, switching my personal care products to naturals. I know that I’ve really chipped away at my “toxic burden” by doing all of these things. And though it takes some upfront investment, these one-time changes are some of the easiest to make, because you won’t have to think about them again.

C.P.: There’s often a sense of desperation and panic that comes with a diagnosis of any disease. What do you say to people who may be freaking out that they may never be able to drink a dirty martini or eat gluten again?

Seeking perfection often causes more stress than the end result is worth. And as someone who’s autoimmune, I really believe that stress is a much more toxic ingredient than the occasional martini.

The best way to find your sweet spot—what works for your body, mind and spirit, and what despite the best scientific and spiritual intentions, may not—is to self-experiment. What I did with my wellness project was make lifestyle changes slowly, steadily, and with the first intention being to pay attention. And I did them in isolation so I could really tease out the impact on both my health and my hedonism (what lifts your spirit and brings you pleasure).

Second piece of advice: Your body will change over the course of months and years, as will your definition of hedonism. Nothing is a life sentence. But you may also find that feeling good is worth more than a second martini or slice of pizza.

BIO: Sarah McColl was founding editor in chief of Yahoo Food. Her food writing has been featured in print and online for Bon Appétit, House Beautiful, Modern Farmer, Extra Crispy and others.

1 bunch of radishes (about 6 medium), cut into ½-inch cubes

Bring a large pot of salted water to a boil. Cook the soba noodles according to package directions until al dente. Drain and rinse with cool water until room temperature, shaking out all the excess. Transfer to a large mixing bowl and set aside.

While the noodles are cooking, in a medium mixing bowl, combine the radishes, cucumber, vinegar, and 1 teaspoon salt. Allow the veggies to marinate for 10 minutes, tossing occasionally.

In the bowl of a small food processor, puree the almond butter, garlic, lime juice, tamari, honey, sesame oil, 1 teaspoon salt, and ¼ cup water. Add more water, 1 tablespoon at a time, until you reach the consistency of peanut sauce. Transfer to the mixing bowl with the soba noodles. Add the zucchini and toss until everything is well coated. Divide among serving bowls, top with the quick pickled veggies, and garnish with the sesame seeds.