A full ten million Americans are iron deficient. Why does this matter? Iron is an important part of hemoglobin, which is a form of protein in our red blood cells. It plays the vital role of transporting oxygen from our lungs to the rest of our bodies, so this means that if you don’t have enough iron for your red blood cells to do that work, you’re likely going to feel very tired and weak, and generally not at the top of your game. Fortunately, there are ways to get more iron out of the foods we eat — in addition to eating more iron-rich foods. Ahead, we’re going to discuss the steps you can take to bulk up on this much-needed mineral.

Know the types of iron

There are two types of iron: heme and non-heme. Heme iron is found in animal foods, most famously red meat. It’s also found in poultry and fish, although in smaller concentrations. Non-heme iron is also available in plant foods, with high concentrations in leafy greens, beans, nuts, fruits, and seeds. While that might make it seem like plant foods can give you all the iron you need, that isn’t exactly the case. Heme iron, meaning iron from animal sources, is much easier for our bodies to use. A whopping 95% of the functional iron in our bodies is heme iron. This is one reason why it’s so common for plant-based dieters to be iron deficient: Even if they eat “enough” iron, that doesn’t mean their body is getting enough iron.

In addition to the complexities of iron types, it’s also important to understand what forms your body can absorb. While heme iron is more bioavailable than non-heme iron in general, the bioavailability of iron in a given food may also depend on how you consume it. For example, cooked spinach is strongly recommended over raw for iron absorption.

Factor in the role of vitamin C

You may know that vitamin C is good for your immunity (and that it’s necessary if you want to avoid scurvy), but few people know the role this vitamin plays in iron absorption. Non-heme iron, AKA the plant-based iron that is hard to absorb, is made more bioavailable by eating it with vitamin C.

Adding foods that are high in vitamin C to your plant-based meals and dishes will help you absorb more of the iron that you eat. Thankfully, this is a super easy ask: We’re talking a squeeze of lemon on cooked spinach (which incidentally will also help prevent that weird fuzzy feeling that spinach can leave on your teeth) or some chopped bell peppers tossed in with your salad or stir-fry. Vitamin C can also help reverse the temporary iron-blocking effect of foods that are high in calcium, which we’ll delve further into below.

Sprouting foods makes them easier to digest because it removes phytates, which are anti-nutrients that prevent your body from absorbing everything a food has to offer. Not surprisingly, iron is one of the many nutrients that’s hard to get from un-sprouted foods due to their phytic acid. Opt for sprouted grains and flours over non-sprouted ones; they’re easy to find these days, and don’t cost much more. You can also get sprouted nuts and seeds, as well as processed foods containing them, such as cracking and chips.

You may have been told it’s a myth that cooking in cast iron can help you top off your iron intake, but it’s actually true. One study yielded the result that “the introduction of iron pots or improving their use in communities in developing countries for the preparation of food maybe a promising innovative intervention for reducing iron deficiency and iron deficiency anemia.” A meta-analysis of eleven different studies agreed, noting that iron increase was particularly high among children.

Polyphenols are antioxidants that are found in coffee, tea, and wine. In general, they’re very healthy for you, and you want them in your diet. However, polyphenols significantly reduce the amount of non-heme iron you can absorb from your food.

It’s important to note that calcium can temporarily inhibit iron absorption, but that effect is considered less serious and the iron is usually absorbed later, unlike when iron is consumed with coffee, tea, or wine. It can also be mitigated by adding vitamin C to your meal, as referenced above.

The following recipes either contain foods high in heme iron, which is absorbable on its own, or foods high in non-heme iron that are paired with other ingredients that contain nutrients to help your body absorb iron.

1. Brothy Greens and Beans with Lemon 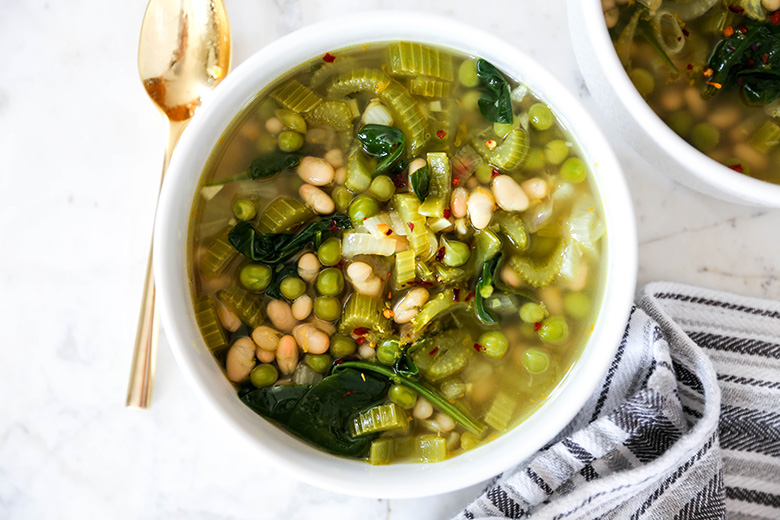 Both beans and leafy greens offer hearty amounts of iron, but it’s the lemon in this dish that enables you to get that into your blood where it can be used. A full two tablespoons of olive oil makes the healthful dish rich and satiating, and it employs convenience foods like canned beans and frozen peas for quick preparation. We love everything about this stew, from the high-iron ground lamb that cooks quickly to the high-in-vitamin C tomatoes and apricots that will enable you to absorb the iron from the chickpeas. Additionally, it’s full of antioxidant-laden spices like cumin, turmeric, allspice, cayenne, and coriander — so it’s bound to taste absolutely delicious. 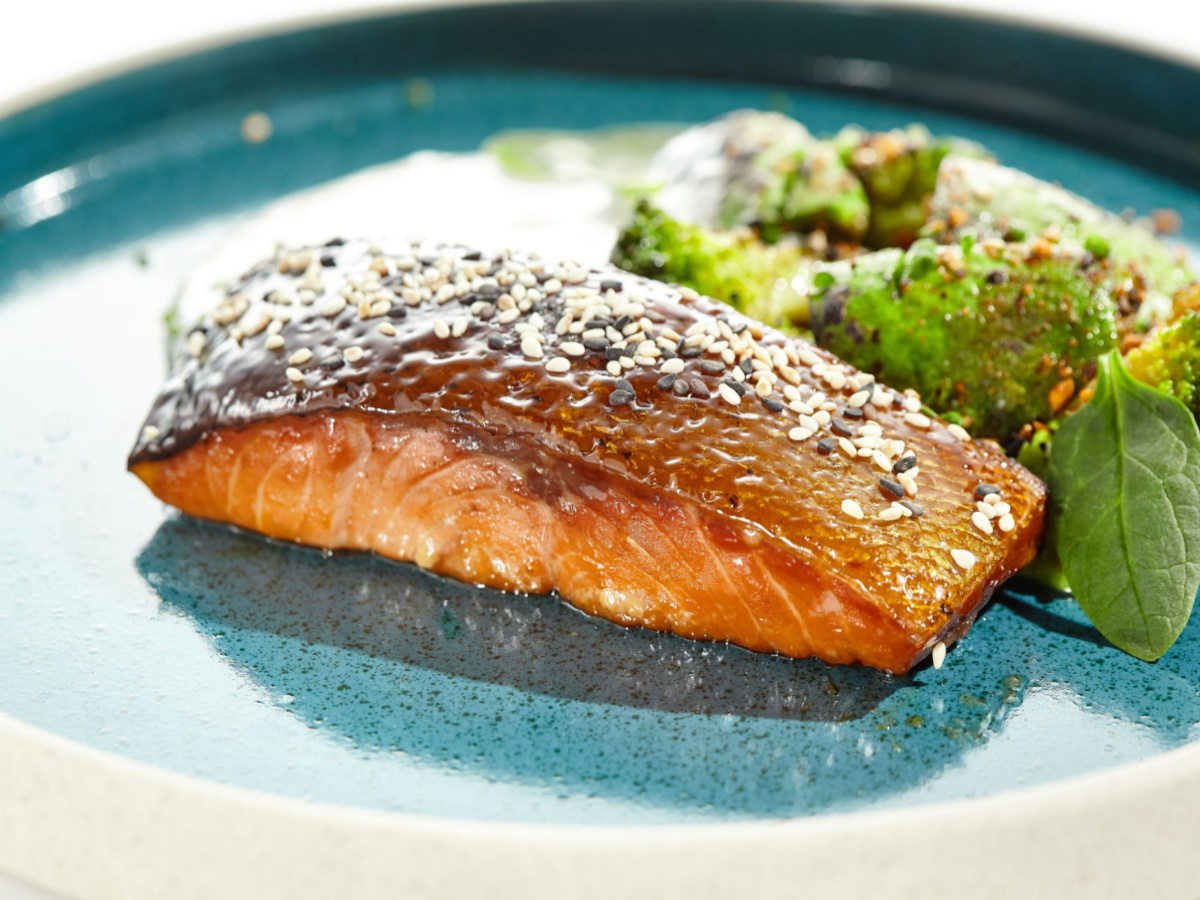 Like red meat, the iron in fish is the heme, easier-to-absorb variety. Here, salmon is pan roasted and then paired with kale and grapefruit, a combo which is perfect for iron absorption since grapefruit is high in vitamin C, which helps you get the iron out of kale. The recipe calls for two garlic cloves, but we think you could easily double that. 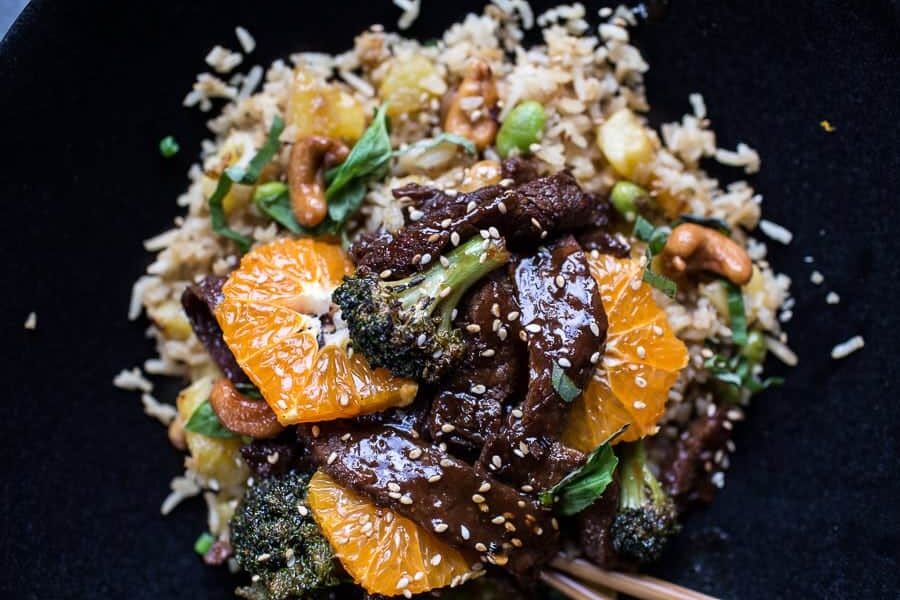 What’s not to love about teriyaki beef? We were fans of this recipe from those words on, but we’re particularly impressed with how it employs a full cup of freeze squeezed orange juice, which is perfect for helping you absorb the non-heme iron of the broccoli. Swap the quarter cup of brown sugar for maple syrup or a noncaloric alternative, and this dish will be all the healthier for it. 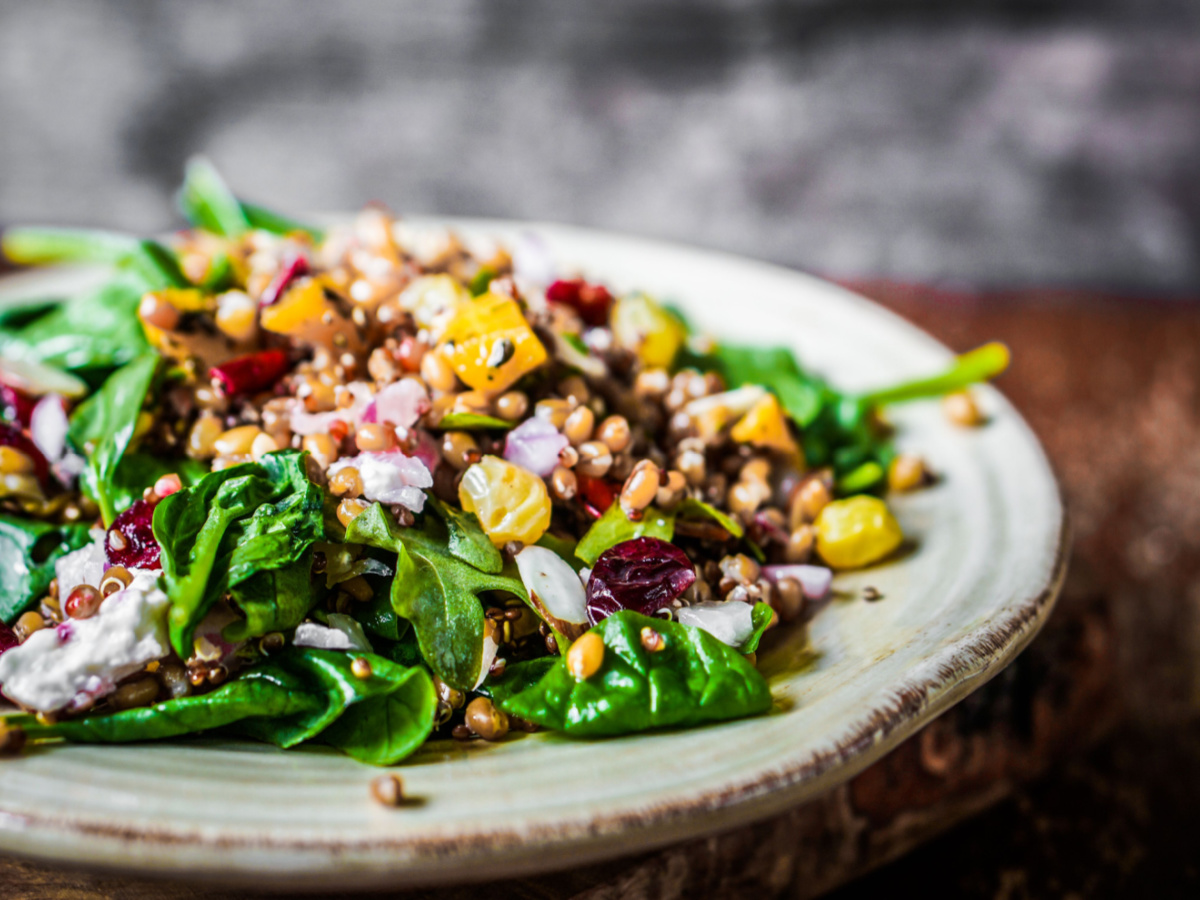 Rainbow quinoa might sound intimidating, but it’s simply a blend of multiple quinoa varieties in one bag. And yes, it’s available for purchase already sprouted, so you don’t have to DIY it. Here, non-heme, iron-rich quinoa and arugula are paired with fresh strawberries, which are high in vitamin C, along with lemon and orange juice. Strips of orange carrot and a roasted golden beet make this salad a truly colorful, delicious meal, as well.