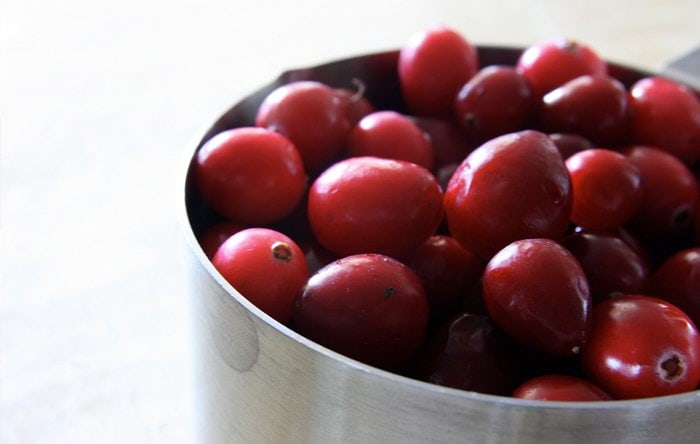 If votes were being cast for favorite Thanksgiving dish, cranberry sauce would earn mine, hands down. Just to be clear: We’re talking about the real deal made from fresh, short-season cranberries, not the garnet-colored Slinky-look-alike out of a can.

Even as an invited guest, I always volunteer to whip up a pot of ruby sweet-tart goodness, ensuring its appearance on the holiday table. It cuts the fat in my gravy, adds color to the stuffing and plays nicely with cooked green veggies.

Along with the blueberry and the Concord grape, the cranberry (aka vaccinium oxycoccos) is a North American native that the Wampanoag and other tribes introduced to English settlers. Although it’s unclear if the fruit was part of the 1621 harvest celebration (“The First Thanksgiving”), cranberries got their first bit of colonial ink in 1643, according to Giving Thanks: Thanksgiving Recipes and History, from Pilgrims to Pumpkin Pie (a must-read for Thanksgiving nerds). It would be another 250 years or so (1912) before they would be squiggled into cans.

Nutritionally, the cran is an excellent source of Vitamin C and fiber and is super low-cal (23 calories per half cup). But the real news lays within the ruby pigments, which are loaded with disease-fighting antioxidants and anti-inflammatory powers. In addition to its ability to fight urinary tract infections, there’s growing evidence that the cran can reduce the risk of gum disease and heart disease.

If you live in one of the top five cranberry states (Washington, Massachusetts, Wisconsin, New Jersey and Oregon), do yourself a favor and hightail it to your year-round farmers’ market while the oh-so-short season lasts. If you don’t live in one of those states, buy a supermarket bag—no, buy two and freeze one—because when it comes to the tin can versus DIY, there’s no comparison. Crans for Valentine’s Day, anyone?

BIO: Kim O’Donnel is a trained chef, longtime journalist and cookbook author. Her work also appears in USA Today. Kim is at work on her second book, The Meat Lover’s Meatless Holiday Table, coming in Fall 2012.