Feeling Tired? Here’s How to Maximize Your Caffeine Kick

We all associate a java jolt with waking up first thing in the a.m., but what if there’s another hour that’s actually better to drink that cold brew for maximum energy? We asked health experts to weigh in on the best times to get that energy kick—whether it’s matcha, mocha, unicorn, chai or a cold brew.

THE BENEFITS OF COFFEE


Caffeine consumption may help speed your metabolism and boost alertness (we could have told you that last part), according to a review published in 2011 in the journal Obesity Reviews. It may also aid in weight loss. Nutrition researcher Kris Gunnars, BSc, notes that drinking coffee mobilizes fat burning, as the body’s fat cells respond to caffeine’s stimulating effect.

Coffee itself offers significant benefits beyond the caffeine. Coffee drinkers, according to recent research, are less likely to have type 2 diabetes, Parkinson’s disease, dementia, and strokes, as well as liver and prostate cancer. It’s loaded with antioxidants, which can also protect the skin from free radical damage and may help prevent cancer. In fact, coffee is the top source of antioxidants in the American diet, says Joe A. Vinson, Ph.D., a professor of chemistry at the University of Scranton.

Of course, there can be drawbacks to coffee. “Drinking too much coffee before you leave the house can be problematic if it affects your bowels,” warns Dr. Lisa Ashe, medical director of BeWell Medicine. “It makes some people have increased bowel movements, and you don’t want to be running to the bathroom, especially if you’re far from home.”

THE BEST—AND WORST—TIMES FOR YOUR CAFFEINE FIX 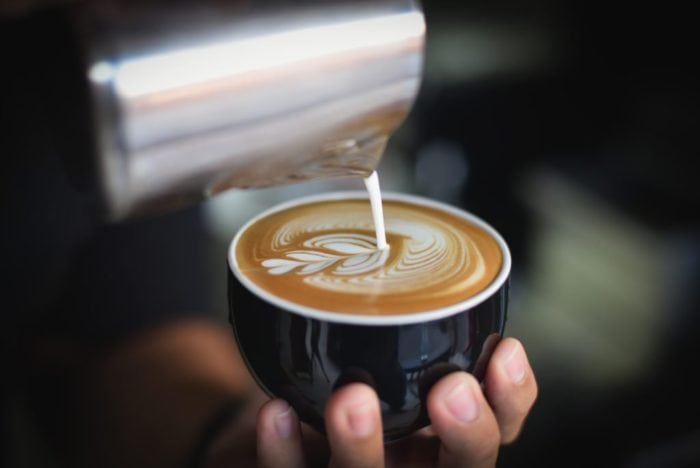 We hate to be the bearer of bad news, but it turns out that your early morning cup of coffee might not be the best idea. Before 10 a.m., levels of the hormone cortisol are at their peak, and caffeine could increase that surge and lead to anxiety in some people, advises registered dietitian Keri Gans. According to research published in the journal Neuroscience, the best time of day to drink coffee is either between 10 a.m. and noon or between 2 to 5 p.m.

An exception to the no-coffee-before-10 idea: Morning exercisers. If you hit the gym in the a.m., that morning cup can help you train longer and harder, while also making the effort seem easier, registered dietician Lauren Koffler tells Clean Plates. “However, if you’re drinking coffee prior to exercising, make sure that you’re also consuming adequate water, since coffee can have a dehydrating effect.” she adds.

As for an afternoon or evening espresso or latte, experts agree that it’s likely to make sleep difficult. The cut-off hour can be different based on the individual; some might need to stop at 2 p.m., while others may be ok until that 5 p.m. deadline.

Wondering about decaf? It’s a maybe as far as sleep is concerned. “Decaf coffee may not impact your sleep schedule; however, you’re still consuming a small amount of caffeine in your decaf coffee. So, if you’re particularly sensitive to caffeine, I’d recommend steering clear,” says Koffler. “Additionally, if you’re drinking decaf coffee at a restaurant, be wary: you may actually be drinking regularly caffeinated coffee.”

Switching to tea and other less-caffeinated beverages is another option, says registered dietician Ashley Koff: “The later in the morning or early afternoon, start moving to tea. And if you need it as it gets later, switch to cacao or white tea.”

So how to balance the benefits of coffee with the potential issues? One solution is to drink it with your midday meal. “I like to drink it with lunch. It helps you get through the afternoon, especially after lunch when many people get tired. It’s still early enough in the day so it won’t prevent you from sleep,” says Ashe.

Plus, caffeine is an appetite suppressant, so it may help you avoid the dreaded munchies that hit many of us around 3 p.m., she adds. We’ll drink to that.