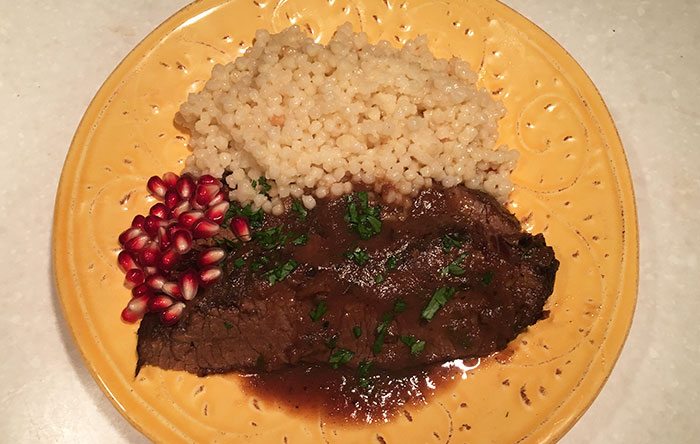 Few things are as homey and comforting as brisket—food’s answer to the Snuggie, tender brisket is cosily wrapped up in a velvety sauce. Eating it makes you feel grateful for the coolness of the air and the crackling of a fire.

One of the many attributes brisket has is its versatility: You can bathe it in almost any liquid to imbue it with flavor. In celebration of the coming holidays, we chose a bath of pomegranates. This ancient fruit, so beloved by Egyptian mummies that they were buried with it, bursts not just with 40% of your daily vitamin C but its anti-oxidant polyphenols act as antibacterial, cancer-fighting agents. Medical Daily even reports on a study that mice who were fed pomegranate juice had lower levels of amyloid plaque in their brains, thus reducing their risk of Alzheimer’s. According to the article, POM Wonderful is 100% pomegranate juice and the best on the market.

Besides a glass (or two) of organic merlot, and a mixed green salad, we’ve paired this brisket with an Apple-Raspberry Oat Crumble. Sugar, butter and white flour are usually found in voluminous amounts in crumbles but our version requires minimal sugar, uses coconut oil instead of butter and oats in place of flour. The result is a delicious treat you can feel great about scarfing up before you get into your Snuggie.

Step 1: Preheat the oven for the brisket, brown the meat on the stovetop and cook the onions. Pour in the pomegranate juice and place in the oven.

Step 4: Mix the crumble and preheat your second oven. (If you don’t have two ovens, remove the brisket when done, turn the oven to 400 and bake the crumble.)

Step 7: Puree onion gravy in a blender and pour over brisket.

5 medium sweet-tart apples, such as Gala (about 2 pounds)

Peel and quarter the apples; cut out the cores and cut each wedge in half lengthwise. Toss in a bowl with the granulated sugar, lemon juice, tapioca, ¾ teaspoon cinnamon and a pinch of salt. Transfer the apple mixture to a 1½-quart baking dish (10 by 6-inch oval), and let stand for 20 minutes to soften the tapioca.

Meanwhile, in a small bowl, mix the oats, oil, brown sugar, remaining ¼ teaspoon cinnamon and a pinch of salt. Set aside: this is a necessary step to moisten the oats.

Preheat the oven to 400 °F. Mix up the apples one more time in their dish, and then cover with foil. Bake the apples for 30 minutes. Remove the casserole from the oven, give the apples a gentle stir and sprinkle the raspberries on top. Top with the oats, reduce the heat to 350 and bake until fruit is bubbly and topping is golden brown, about 30 minutes more. Let cool 20 minutes before serving.