Gretchen Lidicker is a writer, researcher, and the author of the books CBD Oil Everyday Secrets and Magnesium Everyday Secrets. She has a degree in biology and a masters in physiology with a concentration in complementary and integrative medicine. She's been featured in the New York Times, Marie Claire, Forbes, and Travel & Leisure.
|
October 6, 2019

For Dr. Ellen Vora, a holistic psychiatrist practicing in New York City, there aren’t many things that are more important than eating home-cooked meals. Unfortunately, small NYC kitchens, busy schedules, and the temptation of thousands of restaurants that deliver less-than-healthy food to her door in under 30 minutes can make that a hard goal to meet.

And yet, Dr. Vora and her husband would still batch cook all their meals on Sunday afternoon and put them into Tupperware containers for the week. They were making it work!

And then, they had a kid.

“We were practically getting divorced every Sunday,” she says through laughter. “We didn’t have the time or the energy and it was just a mess.” Eventually, her husband thought of a solution. They found a woman on TaskRabbit—an online marketplace that helps users find immediate help with everyday tasks—who had “cooking” listed as one of her skills and hired her to come one Sunday to help. She arrived and spent the hour chopping and putting their food into Tupperware containers, which made cooking during the week so much easier. “We felt like Emeril when we would just throw the already chopped food into a pan,” she says. 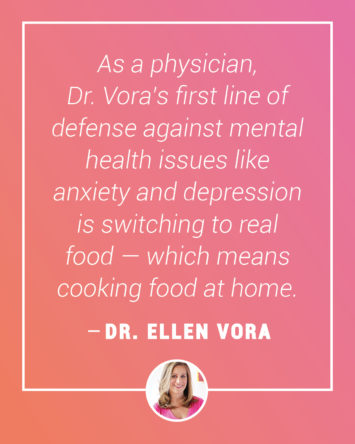 Leave the Chopping to a Pro

Hiring a professional chopper might sound like a luxury, but according to Dr. Vora, the whole hour cost them a grand total of $22 dollars, which in her words, is the same amount “as any crappy takeout meal. And she’s not wrong; those extra $22 dollars guaranteed the whole family home-cooked meals for an entire week. “We were very much saving money in the long run,” she says.

As a physician, Dr. Vora’s first line of defense against mental health issues like anxiety and depression is switching to real food — which means cooking food at home. By doing this she’s often able to help her patients avoid the need to take pharmaceutical drugs. And while that may seem like a rebellious idea today, what we eat does affect our mental health. “Hopefully ten years from now it will seem like the most obvious thing in the world,” she says.

How To Do it: Don’t be afraid to make investments in your  home-cooked meals that seem a little outside the norm. As long as it helps you make better decisions, sustainably, it’s likely to save you money in the long run. Download TaskRabbit to try Dr. Vora’s tip out for yourself.