Have you ever inched away from that person sitting next to you emitting a less-than-pleasant odor? What would you do if we told you that some foods might make you into that person? Yikes.

Unfortunately, some of the foods that can bring on the stink are really good for you. But don’t worry: We have not only the foods to watch out for, but also expert advice on how to eat them without repelling your friends and coworkers.

Eggs are a healthy eater’s friend. They’re versatile, inexpensive and loaded with good nutrition. But they aren’t winning any awards for smelling good. Their familiar unpleasant smell comes from sulfur, and it can be contagious, registered dietician nutritionist Maggie Moon, author of the MIND diet book, tells Clean Plates. And it isn’t unique to eggs; other sulfur-containing foods include onions, garlic, and cruciferous vegetables such as broccoli, cabbage, and cauliflower. Eliminating them isn’t a good idea since they’re some of the most nutritious foods you can eat. Instead, watch your portion sizes if you’re concerned about the smell, says Dr. Lisa Ashe, medical director at BeWell Medicine. She recommends sticking with a typical serving of cooked veggies (half a cup or a cup), but cautions against combining multiple offenders in a sitting, as smell worsens with quantity. So, you might want to choose either the onions or eggs to go with broccoli (or swap for ginger and chicken, to really lower the stink).

One of the many essential nutrients in fish is choline–but it can have a disadvantage as well. “Choline containing foods such as eggs, beans, wheat germ, saltwater fish, and organ meats produce a chemical called trimethylamine (TMA), and some people can’t metabolize it, resulting in a fishy body odor that can be smelled in sweat, saliva, breath, and urine,” Moon says. Ashe recommends spritzing some fresh citrus zest or grapefruit juice on the fish for both flavor and masking properties.

High protein/low carb diets are trendy–but go too far and you may need to reach for the breath mints, stat.

“Carbs are your body’s most important source of energy, so when you eat too few, you start burning your fat stores for energy instead,” explains Lauren Koffler, RD. While this type of ketogenic diet can be great for some but cause others to lose energy and stamina, regardless, the lack of carbs might contribute to some bad smells. “It prompts your body to release a substance called ketones, which cause very unpleasant-smelling breath,” she adds.

If you’re experiencing bad breath, experiment with adding more carbohydrates to your plate, mostly in the form of vegetables and fruit. You can also toss a few spoonfuls of cooked whole grains or beans into your salad for another carb hit.

Red meat may be especially troublesome, especially for guys. “A 2006 study found that men who ate red meat were perceived to have a much stronger foul odor than vegetarian men, after a two-week span. The difference in smells is likely due to the fact that red meat is difficult to digest, and spends a while sitting in the digestive tract, which results in the release of toxins and foul-smelling gasses,” says Koffler.

While some people might not be able to digest plant proteins well, either, such as beans (it’s the musical fruit, after all), there’s something about red meat in particular, because of its density and texture, that can take excess time to pass through, explains Koffler. This can lead to bad odors in sweat, breath, and bowels. Ashe recommends popping a probiotic to help. 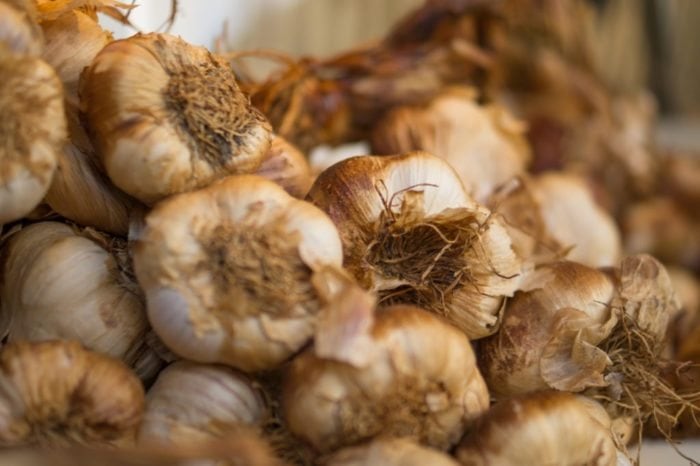 Onions and garlic from the allium family, as well as curry, can lead to some foul smells, says Koffler.

Garlic, onion, and curry, the spice, can cause both bad breath and body odor thanks to the sulfur-containing gasses that these ingredients produce during digestion, as well as their ability to stew within your skin for several days later. Most of these gasses are metabolized, but some make their way into the bloodstream and come out through your lungs and pores, after they’ve nestled in for a bit, Koffler notes. This waiting period can make them especially stinky when they come out through the skin.

When cooking these spices and alliums with veggies, par-boil them in a large pot of water, with some salt, to simmer and remove some of the sulfur, explains Koffler, as you won’t lose any nutritional value or taste, adds Ashe. It’ll take roughly 2-3 minutes, but you should check online for guidance depending on whichever vegetable you’re using. Or, add flavors like ginger, parsley, mint, and cilantro, when roasting, baking, or sautéing to help mask the smell, Ashe suggests.

You can usually tell when someone has had a night of heavy drinking. Aside from the hangover, there’s usually a stale alcohol smell that carries over. “Drink too much the night before, and people will know about it the day after,” Moon says. “When you drink alcohol, most of it is metabolized by the liver as a poison, but a smaller amount literally leaves the body through your sweat and breath.”

No doubt you’ve heard the advice to drink plenty of water while you’re sipping wine or cocktails to avoid hangovers–turns out this may help mitigate the boozy smell, too.

There are a few tricks for counteracting the effects of stinky foods. Moon says that eating dairy can help, so try adding a dollop of yogurt or cheese to your morning eggs, which will also up the protein factor. Also, lemon may help cut the smell, says Ashe, in both the cooking process and the clean-up. Squeeze some on your hands after chopping onions, mincing garlic or preparing fish, and use some within the dish to counteract the smell.

As for the deal with spices, there’s no need to eat flavorless food—instead, try other enhancers like ginger or cardamom, the latter being a bit stronger, but floral, from the ginger family, recommends Koffler. And, while meat is a great source of protein and iron, swap out red meat on occasion for plant-based proteins, as well as chicken or turkey.