May is Celiac Awareness Month, bringing attention to an autoimmune disease that causes intestinal damage and other severe symptoms when gluten is consumed.

In addition to the roughly 1 percent of the population with celiac disease, research estimates that an additional 6 percent have gluten sensitivity, according to Claire Baker, director of communications and new media for the advocacy group Beyond Celiac. Others, most often children, are allergic to wheat. Separately, many people choose to avoid or cut down on gluten in their diets simply because it makes them feel better. That explains why about 25% of the population now eats gluten-free products, according to the market research firm Mintel.

So what is gluten, exactly? It’s a protein found in wheat and some other grains, including rye and barley, and it helps foods like breads maintain their shape. But it also sneaks into packaged foods like soy sauce, salad dressing, and even some potato chips. (If you see “malted” or “malt” on your bag of BBQ chips or any other product, that most likely means it contains gluten.)

Fortunately, awareness about gluten and options for people avoiding it have gotten much better. Sales of gluten-free foods grew by 136 percent from 2013 to 2015, according to Mintel, which estimated sales at $11.6 billion in 2015. Gluten-free offerings on restaurant menus have also shot up and some college campuses, including Cornell and Kent State, now have gluten-free dining halls.

Though the “gluten-free” label is voluntary, any package that carries it must meet the FDA gluten-free regulation standard. Just remember that “wheat-free is not gluten-free,” Baker warns. “Because not all gluten-containing grains are required to be called out on a package label, consumers need to educate themselves about identifying sources of hidden gluten.” That advice about identifying hidden sources of gluten goes for eating at restaurants, too.

Of course, cooking at home is one sure way to avoid gluten, so we’ve rounded up some of our favorite gluten-free products and recipes to get you started.

Gluten-Free Pastas: Avoiding gluten doesn’t mean you have to say so long to noodles. Dig your fork into these six no-wheat pasta products, including ones made from chickpeas, buckwheat, and rice.

Three Bakers Breads: A lot of commercial gluten-free breads are small, fragile and flavorless but Three Bakers is not loafing around. It tastes as hearty and substantial as any other high-quality whole-grain loaf. You won’t ever want to toast up anything else.

Simple Mills Almond Crackers: There’s still a tasty way to get your crunch on and enjoy your favorite cheese. These gluten-free almond flour crackers come in a variety of flavors, including a Cheddar variety that you would swear is a certain favorite tiny square-shaped orange cracker. We also love Jilz Crackerz, which are gluten-free, vegan, and paleo.

Mikey’s English Muffins: These toaster-ready muffins are made with a blend of coconut flour, almond flour, and eggs for a breakfast treat that’s gluten free and low in carbs. Available in original, toasted onion and cinnamon-raisin.

Siete Family Foods’ Almond Flour and Coconut & Cassava Tortillas: Did somebody say tacos? Gluten-free corn tortillas are an option (check the label), but if you’d rather go completely grain-free, these tasty tortillas will be your jam.

Emmy’s Organic Macaroons: When you need a treat, these organic, gluten-free, dairy-free bites are just the sweet, chewy ticket. 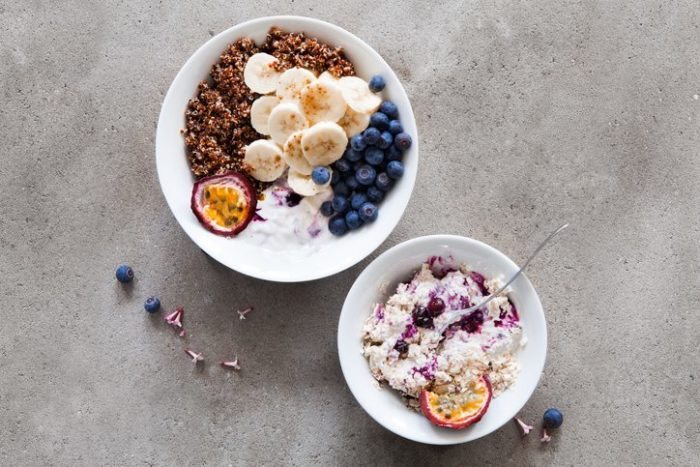 Note: When making these recipes, be sure to check the labels for ingredients such as oats and baking powder, as well as condiments like honey mustard, which sometimes contain gluten.

Quinoa with Avocado and Pumpkin Seeds

Quinoa Tabbouleh with Corn and Chia

Sauteed Green and Yellow Zucchini with Pistachios, Mint, and Lime

Blistered Broccoli with Garlic and Chiles

Want more? Beyond Celiac has handy guides to reading food labels and avoiding gluten when dining out.

BIO: Megan O. Steintrager holds a master’s in journalism from New York University and has been an editor and writer for Epicurious, Gourmet.com, TODAY, Food Network Magazine, and Zagat, among other outlets.