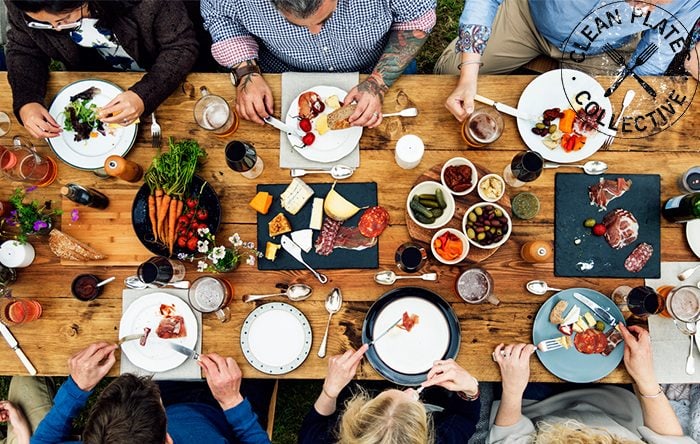 As adults, we don’t remember how we learned to eat. But when you become a parent, you get a chance to step back and think about all your ingrained habits around mealtimes. Now that my wife and I are teaching my daughter to be a mindful eater, we’re looking at the whole picture—the time we spend at the table, our food choices, and even the way we chew each bite.

As I’ve brought fresh awareness to the process, I’ve developed some approaches for creating a more conscious mealtime experience. Here’s my step-by-step guide to eating mindfully.

There’s nothing more distracting than jumping up throughout the meal to grab the mustard, get another glass of water, change the music, etc. Take the time to think about exactly what you’ll need. One thing you don’t need: Your phone. (Even the members of the Super Bowl champion Philadelphia Eagles defense adopted a no-phone policy for their weekly team dinners.) Setting the table is also a nice ritual to do with friends and family, so that everyone feels included even if they didn’t help prepare the meal.

2. Get quiet before digging in

Wait until everyone has served themselves or each other, and then take a few silent minutes to close your eyes, settle in, and get centered after the bustle of getting the food prepared and on the table. Sitting and breathing together kicks off an effect known as entrainment, in which everyone in the group syncs up and there’s a collective sense of energy and focus. You’re creating an atmosphere of connection and positivity before the meal even begins.

3. Offer thanks and praise

Take some time to express gratitude—to the animals and plants you’re eating for their nutritious offering, to the people who raised and grew them, and to the cooks and helpers at the table.

You can go a little deeper with the gratitude ritual if you wish: I’ve spent some time with an elder at the Chumash reservation near my home in Ojai, California, and he’s shared with me the traditional Native prayers said before a meal, which include expressing gratitude for the intangible elements of our food—the energy and power that we get from this nourishment. There’s also a tradition in his culture of not just thanking, but also praising the animals we eat for their strength and health, which they pass on to us.

4. Make your first bite a vegetable

When we get to the table, we’re hungry, and our first impulse is to shovel in the food. When my little daughter eats, she’s acting on pure instinct, with the one goal of satisfying that drive to survive. It takes effort to override that primal conditioning. The way I do this is by making my first bite a vegetable. There are a couple of reasons for this: One, it encourages me, as the cook, to make veggie dishes that are just as delicious as the meat or other main courses, instead of being afterthoughts. That first bite is always the best, so I want to really enjoy it. Two, it slows me down. Instead of obeying that hunger instinct and digging into the dish that I might consider most filling, I’m making the meal last longer. Third, the flavors of vegetables are often more subtle than meat or dairy, so we need to really tune in so we can fully experience the complexities of the taste experience.

There’s a mindfulness ritual in which practitioners chew each mouthful as many as 50 or 100 times. Try counting how many times you typically chew a bite, and you’ll realize how quickly we swallow our food. From a health and wellness perspective, chewing is vital to nutrient absorption; amylase, an enzyme in our saliva, does the first work of breaking down and digesting our food. Try chewing each bite five or 10 times for maximum nutritional impact. As a reminder to pause between mouthfuls, put your silverware down after every bite, and don’t pick it up again until you’re consciously ready to move on to the next bite.

When we’re chewing and swallowing quickly, we’re probably not breathing deeply and slowly. Take time to focus on your breath as you eat and between bites—it will also increase your enjoyment, because the olfactory receptors in the nose are as important as our taste buds in communicating flavor to the brain. Slow, deep breaths also calm the nervous system, which improves digestive function.

7. Stay at the table until everyone’s done

Instead of jumping up to start clearing or washing dishes (or to check your phone), stay at the table until everyone is finished. This encourages more leisurely eating, since the group has to adjust to the pace of the slowest eater. It also extends the conversation and the positive group dynamic that’s been created throughout the evening. An added benefit: There are more people around to help with the cleanup.

BIO: Chef Jeffrey Zurofsky is the co-founder of NYC restaurants ’wichcraft and Riverpark, as well as Riverpark Farm. He is also the culinary program director at Newport Academy, a treatment center for teenagers. Jeffrey recently appeared as a co-host on Bravo’s Best New Restaurant.