A Smoothie Bowl That Fights Inflammation (and Tastes Like a Treat) 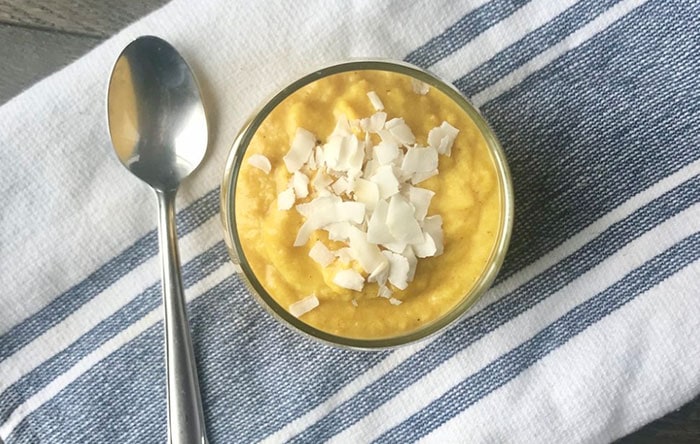 When it comes to smoothie bowls, we want Clark Kent and Superman—that is, we want it to taste indulgent, but we also want it to have inflammation-fighting superpowers.

Registered dietician Jenna Gorham swooped in to the rescue with this Coconut Turmeric Smoothie, which combines an orange, some frozen cauliflower, coconut milk, flax, collagen peptides and 2 scoops of Further Food Turmeric Tonic. Her smoothie “tastes almost tropical, so it’s perfect for spring or summer,” she says. “It has a subtle coconut flavor, plus the turmeric and orange, nice and fresh.”

Turmeric, the star of the Further Food powder, is known for its anti-inflammatory properties. (The powder also contains a touch of black pepper, which boosts the bioavailability of the turmeric.) Plus, it has cinnamon and ginger, which are also anti-inflammatory, Gorham says. And did we mention the adaptogens? Meet your new friends Boswella and Schisandra, which help with pain reduction and stress relief. (P.S. Turmeric Tonic’s superpowers don’t end with smoothies—you can also use it to make the ultimate golden milk or turmeric tea.)

Adding cauliflower to your smoothie bowl is another way to fight inflammation, Gorham notes. “I always throw a vegetable into my smoothies,” she says. “People find it challenging to get all the vegetables they need every day, so it’s a simple way to get them in.” Flax, a good source of fiber, fights inflammation, too, and the collagen peptides provide protein.

Gorham recommends making the smoothie nice and thick and serving it in a bowl. Top it with granola for breakfast or just some coconut flakes for a snack. “It’s good to have smoothies in a bowl, with a spoon,” she says. “It causes you to be more mindful, to engage in the act of eating.”

Ready to enjoy the ultimate healthy, delicious, inflammation-busting smoothie bowl? Bonus: Further Food is offering Clean Plates readers 20% off. Just use the code CLEANPLATES at checkout, or use this link and the discount will be added automatically.