Crunch On These 7 Healthy Chip Alternatives 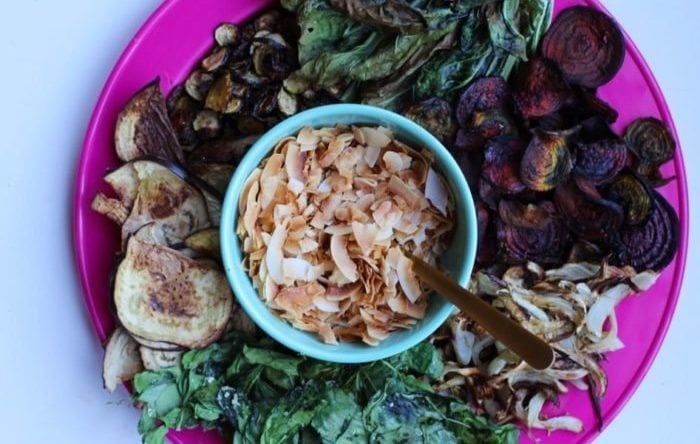 Craving the crunch of potato chips, but not in the mood for the grease and the junk-food crash that comes when the crinkly bag is empty? Good news: You can make tasty chips that will satisfy the urge to crunch, and give you tons of nutrients to fuel the rest of your day.

The secret is to start with flavorful vegetables. Slice them, toss with a little heart-healthy olive oil and you’re on your way.  Plus, “by using your own blend of seasonings, you’re able to control sodium and avoid preservatives,” and make them any flavor you like, registered dietician Elizabeth Shaw tells Clean Plates.

CHIP AND CHARGE WITH THESE TIPS

Here’s a quick guide to making the best batch of chips: 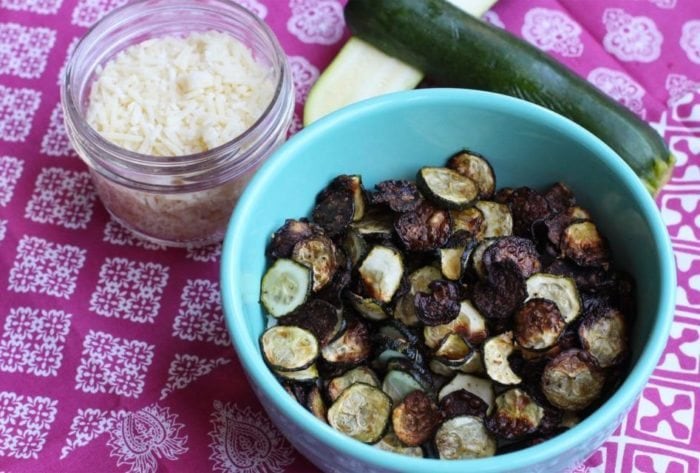 High in fiber and low in calories to keep you full, zucchini has a neutral flavor that goes well with pretty much anything. Loaded with vitamins C and A, it keeps eyes, bones, teeth, skin, and nails strong. Shaw recommends making DIY ranch dressing to put on them. “Slice a zucchini into quarter-inch-thick rounds and liberally season with DIY Ranch and olive oil. Bake at 275ºF for just under an hour for a nice, crisp texture. Be sure not to burn and check the oven halfway through.” For another flavor profile, “My favorite [seasonings] are Parmesan, garlic powder or smoked paprika to spice things up,” says registered dietician Lauren Harris-Pincus. 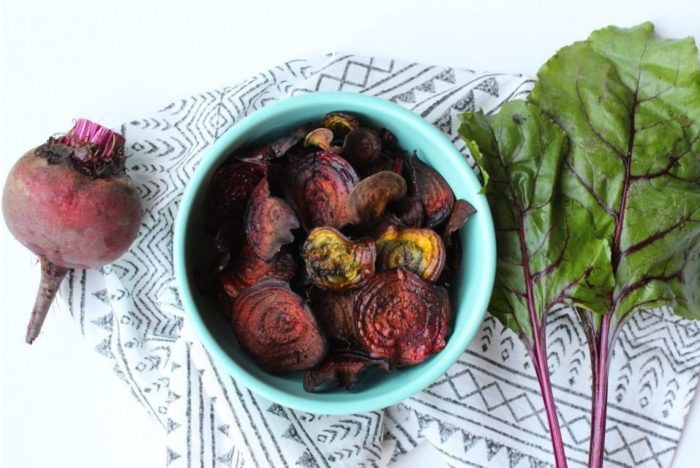 Who can resist munching on a pink chip—especially when they’re only 65 calories per serving? Plus, beets are packed with nutrients to build endurance, strengthen bones, and fill you up, advises registered dietician nutritionist Maggie Moon, author of the MIND diet. In fact, eating beets pre-workout may increase performance and circulation, according to a 2013 study published in the Journal of Applied Physiology. Moon seasons her beet chips with 1 tablespoon lemon zest, 2 tablespoons heart-healthy olive oil and bakes them at 275ºF for just under an hour. Pro tip: Be sure to buy medium to large beets, since they shrink when baking, Moon notes. Don’t care for beets? You can do the same thing with turnips, Beverly says. Turnips are especially high in B vitamins, calcium, and fiber, as well as potassium—so snack on a few post-workout to rebuild electrolytes. 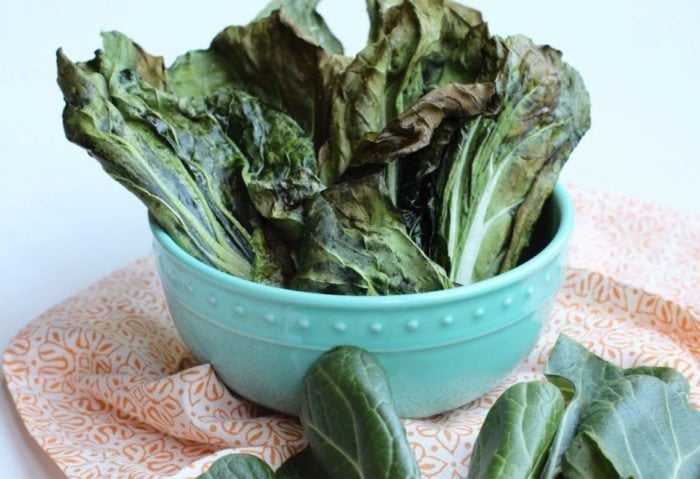 “Bok choy is one of the most nutrient-dense vegetables on the planet, with abundant calcium, iron, vitamins A, C and K, folate and B6,” Lauren Blake, a registered dietician at The Ohio State University Wexner Medical Center, tells Clean Plates. Plus, it’s “extremely low in sodium, [and] it has only two grams of carbohydrates per serving.” Here’s how to do it: “Cut the bottoms off of 2 heads of baby bok choy, leaving the green tops (if the leaves are large, tear the leaves in half). Place the leaves in a large mixing bowl and toss with about ½ tsp. olive oil and a few pinches of salt. Spread the leaves on a baking sheet and bake for only about 6 minutes at 325ºF. Watch closely, as these leaves can burn quickly,” Blake notes. 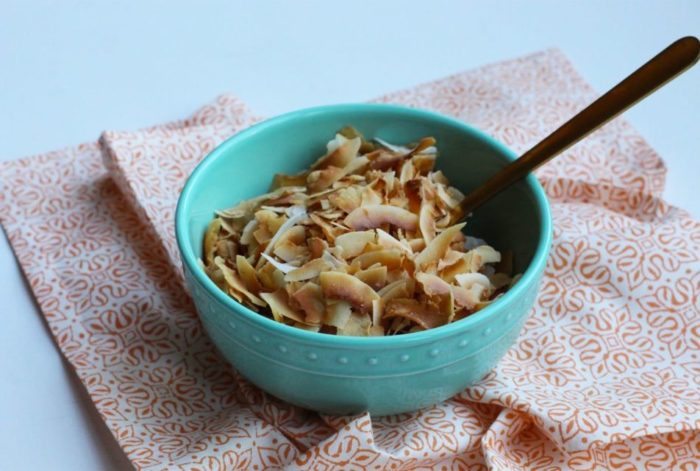 If you’re looking to satisfy a sweet craving, this one’s for you. And coconut is so versatile; sprinkle them on salads or soups, on top of your favorite chicken or fish, or mix them into a granola. And, they’re high in the healthy fat, linoleic acid, which promotes brain and heart health and lowers risk of cancer, says Walter C. Willett, M.D. at Harvard Medical School. Here’s how to do it: “For a simple sweet and salty combination, toss about 3 cups of dried unsweetened coconut with 1 Tbsp. water or coconut milk, ¼ cup coconut sugar, and ½ tsp. salt. Spread on a baking sheet and bake at 325ºF for about 5 to 7 minutes, then flip the pan around and bake for another 5 minutes or until the coconut is golden brown,” says Blake. 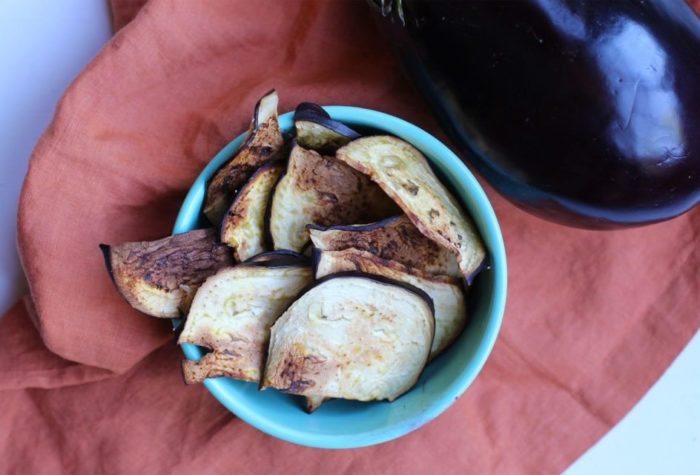 Forget the sauce and cheese—though we love eggplant Parm, too, we have another, healthier way to enjoy this purple wonder. Slice a firm Japanese eggplant into thin rounds using a mandolin or very sharp knife. Arrange on a baking sheet in a single layer, coat the eggplant with a drizzle of olive oil, and sprinkle with salt, says Blake. Bake at 250ºF  for about 50 minutes, rotating the baking sheet halfway through. Flip the slices and continue baking until browned, about 20 minutes longer. 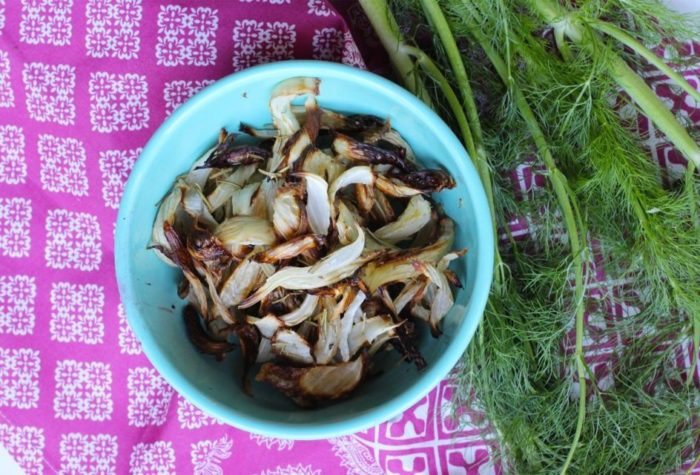 This licorice-flavored vegetable may not be the first thing you think of when we say “chips”—until you try them. “Fennel provides cell protective flavonols and antioxidants, fiber, and potassium, as well as small amounts of iron, selenium, calcium and magnesium, manganese and zinc,” says Blake. To make fennel chips, remove the stalk and fronds from 1 fennel bulb. Cut the fennel into quarters, remove the tough core and finely slice the rest. Place on a paper towel, top with another paper towel and press to remove extra moisture. Then, toss fennel in a bowl with 1 Tbsp. olive oil, a pinch of sea salt, a squeeze of fresh lemon, and herbs such as dill, cumin, chipotle, or rosemary. Bake at 250ºF for 30 minutes, then flip the slices and bake for 30 minutes longer, or until the edges are brown and crispy. 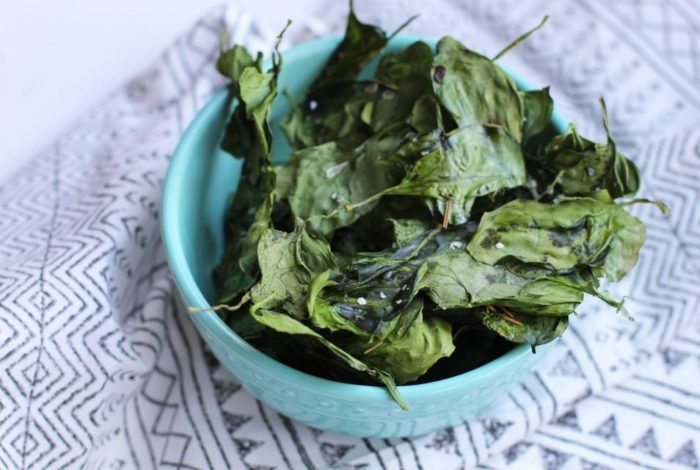 Kale chips get all the love, but many leafy greens like spinach make for healthy, simple chips. It’s super simple: Combine 2 cups baby spinach leaves with 1 Tbsp. olive oil. Spread in a single row on a baking sheet lined with parchment paper, and sprinkle with seasonings, such as garlic, nutritional yeast, turmeric or ginger. Bake for 12 minutes at 325ºF. “Turn off the oven but leave the pan in there for an additional 5 minutes, to let it cool. Remove the pan from the oven and let the spinach sit in the pan for another 5 minutes to crisp up even more,” Blake suggests.

You can even do this with Brussels sprouts: Remove the leaves from about 1 lb. of sprouts, starting slowly at the bottom and working your way up, and place in a single layer on a baking sheet. Drizzle with 3 Tbsp. olive oil, sprinkle with sea salt and toss to coat. Bake at 350ºF, turning every 5 to 7 minutes, until brown and crunchy, says Blake.