Why I Fell in Love with This Italian Vegetable (and You Should, Too)

After living and studying in Italy for a year, I returned with all the things you’d expect: A knowledge of (and thirst for) good wine, the need to eat pasta on a regular basis, and some semblance of fluency in the language. What I didn’t think I’d come back with was a deep love for a single vegetable: radicchio.

I fell hard for its deep purple hue and bitter flavor. While it doesn’t receive the same care and attention in the U.S. as it does in Italy, I firmly believe it should. Let me try to convince you.

But, First: What Is Radicchio?

Radicchio is a leafy vegetable that’s part of the chicory family; other members include endive, escarole, and frisée. Just like you’ll find different types of endive, such as red and yellow, there are many different varieties of radicchio. The most popular and easy to find in the U.S. is Chioggia, which looks like a small red cabbage. Other varieties include Treviso, which is elongated in shape, Tardivo, which has almost finger-like leaves, and Castelfranco, which is especially unique: Instead of being simply reddish-purple in color like the others, it looks like a pale green head of lettuce that’s been speckled with purple. All varieties have an unmistakable bitterness, though some varieties, such as Treviso, have a tamer bite. A touch of sweetness plays in the background, which helps counter radicchio’s sharp edge slightly.

Nutrition-wise, radicchio is low in calories and carbohydrates just like other leafy vegetables. It’s a rich source of vitamin K and contains a small amount of vitamin C, zinc, and potassium. Radicchio is also a good source of antioxidants. That’s thanks to its purple color, which comes from a plant pigment anthocyanin, a natural antioxidant found in all deep red, purple, and blue fruits and vegetables, including blueberries, eggplant, and cherries.

How to Buy and Store Radicchio

Though I’ve seen heads of radicchio at the grocery store all year long, their true season is late fall through winter. When buying, it’s normal to see the cut root lightly brown, but the leaves should be crisp, without any browned edges or spots. Generally, the smaller the head, the less bitter it will be.

When you get home, store radicchio in your refrigerator’s crisper drawer, loosely wrapped in plastic wrap or an open plastic bag. It will stay fresh for at least a week, if not longer, when kept this way. 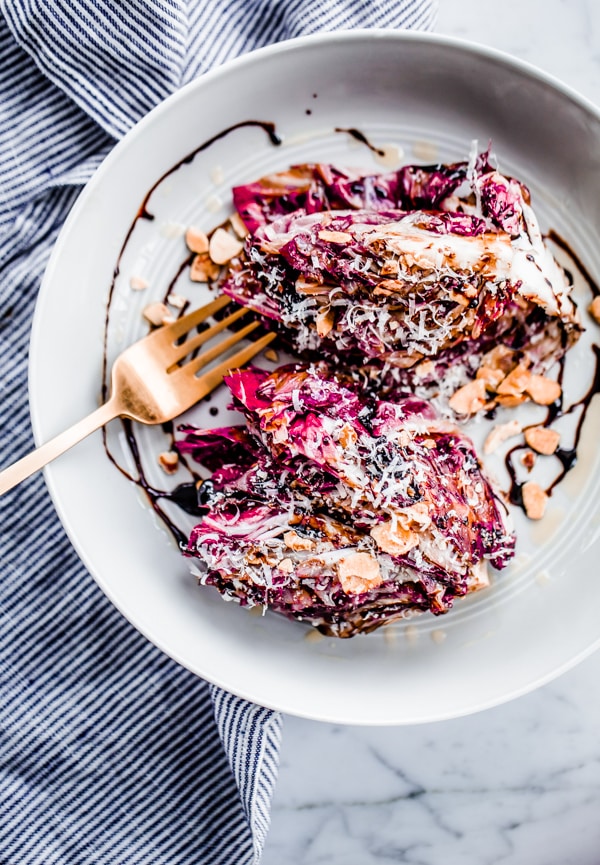 Why I Fell in Love with Radicchio

Radicchio brings vibrancy to the prevailing beigeness of winter vegetables, but it’s so much more than its purple hue. It has a bold bitterness and slightly-spicy flavor that can be toned down or paired with other strong flavors. In short, radicchio is a versatile veggie that can go in endless directions, both raw and cooked.

It’s wonderful in salads, especially in the winter, because it brings color to the bowl. Use it in combination with other chicories, such as escarole or frisée, or balance its bitter flavor by mixing it with other lettuces, such as butter lettuce, arugula, or romaine. A dressing with a touch of honey or maple syrup nicely counters radicchio’s flavor, but it can also stand up to rich and creamy dressings and ones that feature bold ingredients such as anchovies and olives.

I love thinly slicing radicchio and stirring it into a cheesy risotto or wilting it into a meaty pasta sauce when I want its flavor to sing quietly in the background. When I want it front and center, though, I like cutting the head into wedges and grilling or roasting them so the edges char and soften.

Do you love radicchio as much as I do? What’s your favorite way to eat it?