If mushrooms are typically an afterthought in your cooking life—we’re not asking about the other kind of shroom—it’s time to shine a spotlight on these unsung funky fungi.

In the past, they weren’t considered a big nutrition source, but actually they boast a host of impressive health benefits. Depending on the type, they can be antimicrobial, immune-boosting, and anti-inflammatory. Plus, “mushrooms add a rich umami flavor to dishes,” says registered dietician and personal chef Allison Schaaf, founder of meal planning website PrepDish.com. Personal chef Katie Simmons, who specializes in plant-based recipes, says their beefy texture makes mushrooms the easiest go-to meat substitute.

In terms of getting the most nutritional bang for your grocery buck, sourcing your mushrooms can make a big difference, since growing conditions greatly affect their nutrient content, notes Jerry Angelini, education director for Host Defense mushrooms. Enoki and oyster mushrooms are raised on hay, which boosts vitamin B levels; hay grown in composted soil adds even more nutrients. Varieties raised under UV lights may have high levels of vitamin D. But not all mushrooms are grown in these conditions. So when possible, experts suggest buying from your local farmer’s market or specialty stores, where sellers are more likely to know these kinds of details. And if you don’t have access to many varieties, Schaaf suggests ordering dried mushrooms online; rehydrate and add to soups and sauces.

A few pro cooking tips: All mushrooms need to be cooked for at least 10 minutes to get the most nutritional benefits, says Angelini. Since mushrooms release water as they cook and can become soggy, don’t overcrowd when sautéing, Schaaf notes. If you have a lot of mushrooms to cook, work in batches on high heat.

Here are 6 delicious, healthy, readily accessible mushroom varieties and how to use them. 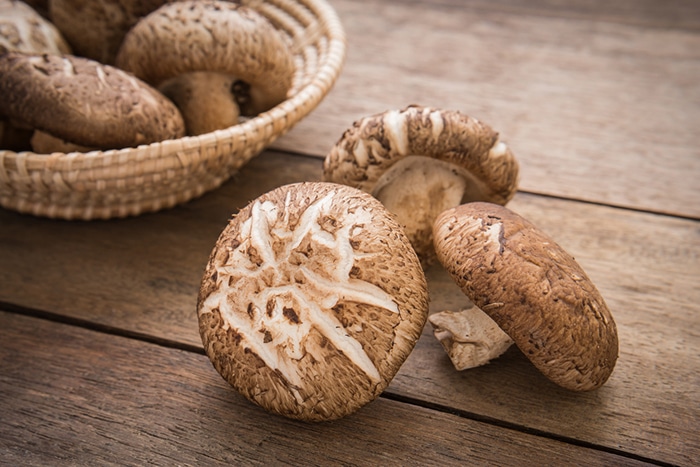 Why We Love Them: Simmons calls shiitakes a two-for-one deal, because you can add the inedible stem when making stock to add flavor, while the edible caps soak up tons of flavor. Preliminary research indicates that shiitakes may fight harmful oral bacteria and support mouth health, says Angelini. Dr. Weil also loves shiitakes because they help with immune function and lower the amount of cholesterol circulating in your blood.

Mushroom Recipes: Simmons recommends making a miso-shitake ramen broth using a handful of seaweed, two cloves of garlic, a pinch of grated ginger, two chopped Thai chili peppers, 1 tablespoon miso paste, 4 to 5 cups of water, and one pound of shitake stems, separated from caps. Simmer all together for 15 minutes, then strain to collect the broth. Add chopped 5 ounces diced firm tofu, one can of drained and rinsed black beans, and sliced mushroom caps to the broth, simmer for an additional five minutes, and serve. 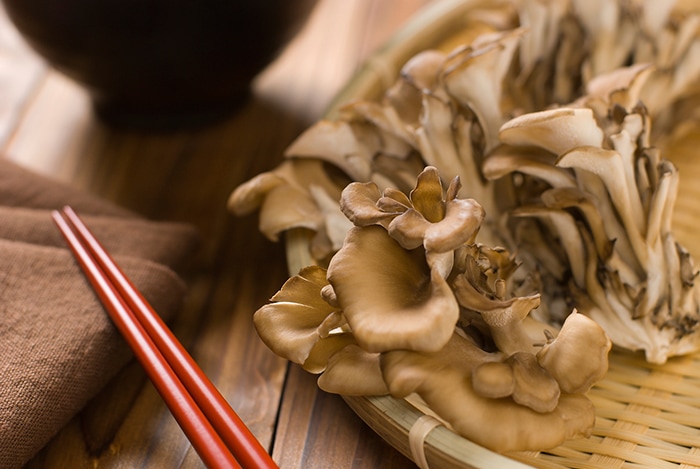 Why We Love Them: “Maitakes are crazy mushrooms in the wild,” says Simmons. “They grow in a big clump that looks like a big bush or a rooster comb.” No wonder their other name is “hen of the woods.” Maitakes are one of very few plant sources of vitamin D—containing nearly double the daily recommended intake for most people in 1/2 cup—as long as they’re exposed to UV light while they’re grown. Animal studies have indicated that maitakes might help regulate blood sugar levels, Angelini adds.

Mushroom Recipes: Simmons suggests dry roasting these giant mushrooms whole in a 400ºF oven for 15 to 20 minutes until the tops are brown and they shrink to about half their original size, then flipping and roasting for another 5 to 10 minutes, until brown around the edges. Sprinkle with salt and pepper, then top with chopped parsley and sprinkle with lemon juice. “Roasting this way releases moisture and intensifies flavor,” Simmons says. “The large pieces take on a steak quality and can become an impressive centerpiece for a vegan dinner.”

Another option, given their unique texture: Make them into a crab alternative, Brill suggests. Mix 1/4 cup Cajun seafood seasoning*, 1/8 cup chili paste, 1/8 cup olive oil, 1/8 cup fresh dill, 1 tablespoon tamari, and the juice of 1/2 lemon. Chop mushrooms coarsely, baste in the seasoning, and bake uncovered in a 350ºF oven for 45 minutes, until crisp. 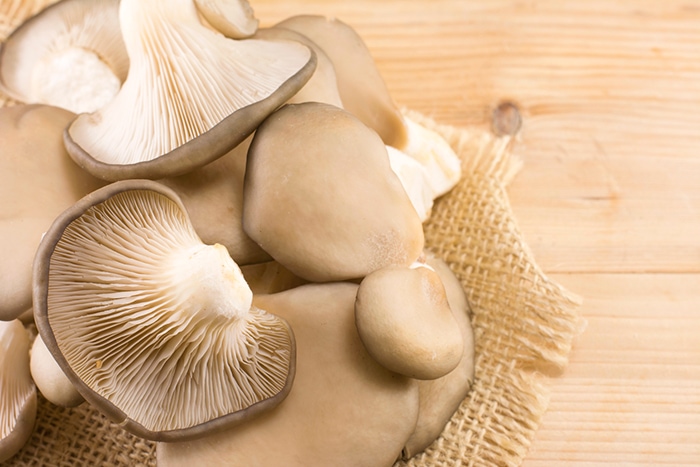 Why We Love Them: These delicate, long-stemmed white mushrooms are most common in the fall, says Steve Brill, a naturalist and environmental educator who leads foraging toursl. An animal study indicated that they may help with weight control and heart health. Oyster mushrooms also have a significant amount of potassium, nearly 10% of your DV. Potassium not only helps with blood circulation, but also helps regulate blood sugar and electrolytes. 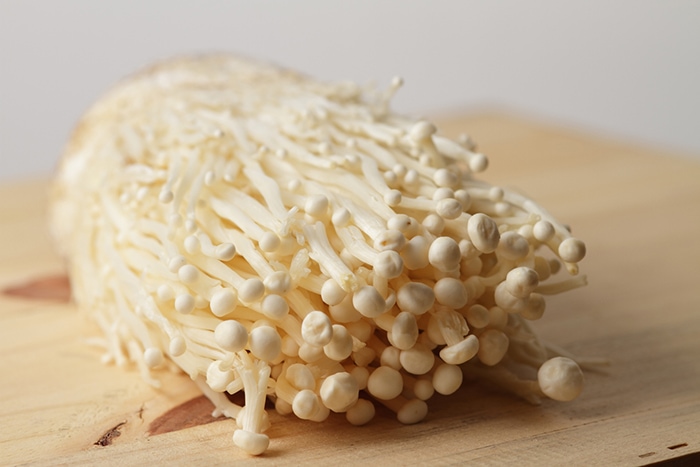 Why We Love Them: These funky tall and skinny mushrooms, sometimes found in miso soup, may be a powerful immune system booster, says Angelini. They also contain nearly half your daily intake of Vitamin B3 also known as Niacin. This helps with cardiovascular health and lowers LDL cholesterol. Enoki can be trickier to find than the other varieties, but are available in Asian specialty and farmers’ markets. “These hold up better when you cook them” than some other varieties, says Schaaf.

Mushroom Recipes: Simmons recommends pickling enokis and using as a textured garnish to balance rich dishes like burgers or creamy pasta. Simmer 1 cup of water, 1 tablespoon red wine vinegar, one chopped garlic clove, and a pinch each of salt, pepper, and red chili flakes for two minutes. Toss in 1 cup in enoki mushrooms and soak for about two minutes. Drain and serve. 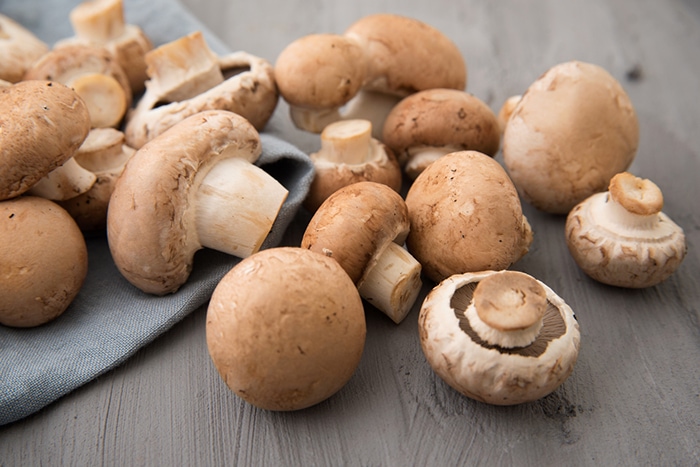 Why We Love Them: Also known as baby bellas, criminis are early-stage Portobellos. Both may contain Vitamin D, depending on how they’re grown, says Schaaf. Simmons calls the crimini the “gateway” variety for mushroom newbies: They’re available at most grocery stores and have all the meatiness of Portobello mushrooms with less work, since you don’t have to remove the gills, simply wash and slice.

Mushroom Recipes: Schaaf uses crimini to replace 25 percent of the ground meat in tacos and lasagna. For a hearty vegetable side dish, she quarters criminis, combines with cut-up Brussels sprouts, zucchini, and sweet potatoes, coats with oil, seasons with salt and pepper, and roasts at 400ºF for 20 to 30 minutes, stirring halfway through, until mushrooms are golden brown.

Simmons makes a hearty, healthy ragout by swapping mushrooms for meat: Cut 1 lb. crimini mushrooms into bite-sized pieces. Chop 1 medium onion and 1 medium carrot and saute in oil until brown. Add 2 heaping tablespoons of tomato paste and caramelize, stirring over medium-low heat until paste is a brownish-red, brick color. Add a dose of 1/4 cup red wine and cook, stirring, until browned bits are released from the bottom of the pan. Stir in two chopped garlic and 1 cup of water, bring to a simmer and cook, stirring occasionally, for 10 to 30 minutes, depending on how thick you like your ragout. Serve over polenta. 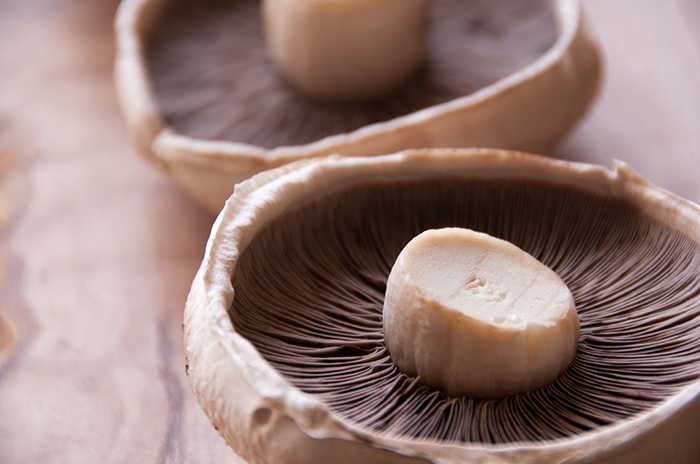 Why We Love Them: Simmons recommends breaking off the stems and removing the gills using a spoon to help Portobellos cook better and soak up flavor. Like Criminis, Portobello mushrooms contain a large amount of Vitamin D. They also have a notable amount of potassium, more than a medium banana.

Mushroom Recipes: For Portobello burgers, brush 4 teaspoons balsamic vinegar, 2 teaspoons crushed rosemary, 1 teaspoon thyme, 2 teaspoons Dijon mustard, salt, and pepper onto two caps and allow to marinade for 10 minutes over medium-high heat for 8 to 10 minutes until brown around the edges, flip, and cook an 5 minutes longer until golden brown. Serve on a bun with caramelized onions or roasted red peppers. Or use Portobellos as a bread-free “bun.” Roast at 400ºF for 10 minutes, flip, and cook for 5 minutes longer. Fill one cap with grilled halumi cheese, sautéed spinach, sweet potato puree, and caramelized onions, or grilled chicken breast and pesto.

Bio: Colleen de Bellefonds is a Paris-based health and wellness journalist and content strategist. She regularly writes and edits for publications including WhatToExpect.com, Women’s Health, WebMD, Daily Burn and Healthgrades.com.