Why Yuca Should Love Cassava

Whether you’re full-on gluten free or Paleo, or you’re just looking for simple ways to avoid so much wheat, chances are you’ve come across cassava. And if you haven’t yet, you will soon.

Cassava (pronounced kuh-SAH-vuh), also known as yuca, is a shrubby root native to South America that is also grown in Malaysia, the Philippines and parts of Africa. It behaves similarly to wheat, giving good texture and neutral flavor to crackers, bread, pasta and chips, and it’s nut free. (Another popular alternative starch, tapioca, is part of the same plant.)

“Cassava … creates a neutral flour, which can be used in various forms of baking,” holistic chef Daniella Hunter tells Clean Plates. “Cassava starch (tapioca) goes even further in that it can help to create a smooth consistency, and can, in a small way, help to mimic gluten. It’s not nearly as ‘glue-like’ as gluten, but it helps when formulating gluten-free baked goods.”

Tapioca can also help thicken foods, including sauces, ice creams and puddings, says Hunter. (Try it in her easy Coconut Yogurt With Tapioca below.)

Hunter, who opened The Real Coconut restaurant in Tulum, Mexico, crafts recipes for digestive health that are free of gluten, grains and dairy. One of her popular creations is a type of chip that has cassava flour as the main ingredient.

“I chose cassava as it is an abundant crop, fits with our philosophy of digestive health, and is one of my ‘top three’ in choices of crops that we focus on: Coconut, plantain, and cassava,” says Hunter. “All grow in Belize—as well as many other countries—abundantly, and can be multi-cropped together. In Belize, we are working on agricultural programs which will support farmers to produce these three crops.” 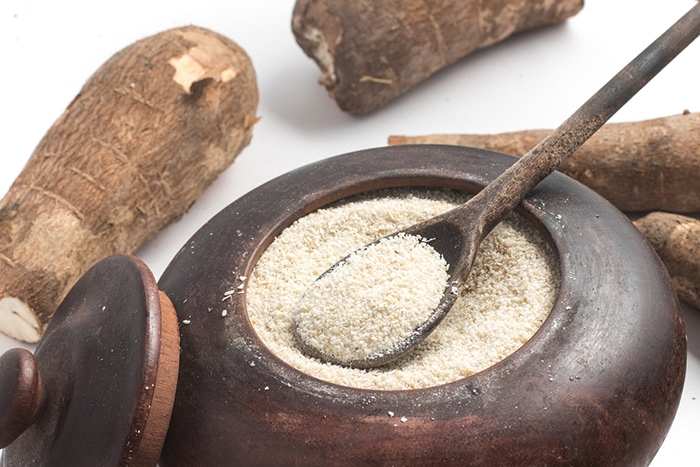 Cassava is a diet staple in some countries due to its high caloric content. One cup of cassava has 330 calories compared to 104 calories in one cup of diced potato.

Cassava is also higher in carbohydrates, with more than double the carbs in 100 grams compared to white potatoes. However, cassava has a low glycemic index, so it is less likely to cause a sharp spike in blood glucose levels as long as it’s eaten in moderation, especially by diabetics.

Hunter, and Paleo lifestyle expert and Primal Blueprint author Mark Sisson, note that cassava flour and tapioca are good sources of resistant starch, which acts as a prebiotic since it helps feed healthy gut bacteria.

A scientific analysis found a variety of cassava products “can be considered good sources of resistant starch; which make them beneficial products to the gastrointestinal tract.”

WHAT TO WATCH OUT FOR 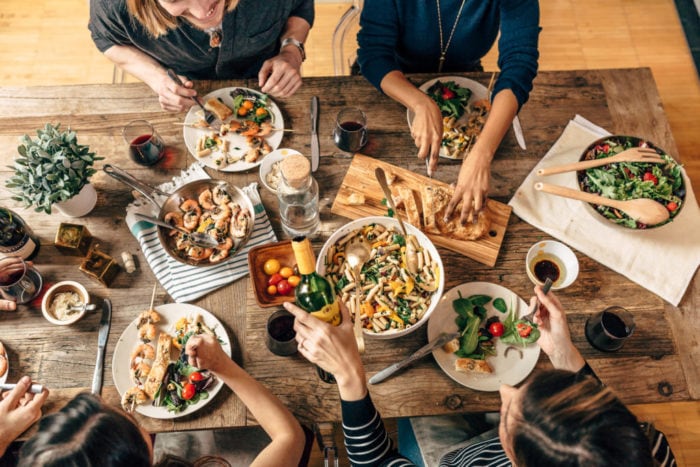 Despite some of the touted benefits of cassava, some, such as certified nutritionist, chef and cookbook author Ariane Resnick, don’t recommend it, finding it “constipating” due to its “high starch/low fiber” ratio. Plus, she finds it “gummy” in baked goods.

Resnick prefers almond flour, coconut flour, chickpea flour, brown rice flour, banana flour, or any other whole-food based flour. “Fortunately, some brands are taking heed and mixing cassava flour with healthier ingredients, which is better than brands that combine cassava or tapioca with other starches and gums,” Resnick notes in an article.

With ever-greater demand for gluten-free and grain-free products, cassava is showing up in all kinds of products, including the below:

Banza Chickpea Pasta: This line of grain-free penne, rotini, shells, elbows and spaghetti (and mac and cheese) made with tapioca have a texture and mild flavor that rival traditional pasta. The noodles are full of protein and fiber from chickpeas and pea protein. (Available in stores and online; $2.95 and up)

Birch Benders Paleo Pancake Mix: Just add water to this mix, which includes eggs, coconut and almond flours and cassava, and you’re on your way to delicious, fluffy pancakes. (Available in stores and online; $5.99)

The Real Coconut Coconut Flour Chips: Hunter developed the recipe for these vegan, paleo-friendly chips, made with cassava flour, coconut flour, coconut oil and spices (mentioned above).  They’re similar in texture to tortilla chips and come in plain, sea salt and vinegar or Himalayan pink salt. (Available in some stores and online; $3.99)

Otto’s Cassava Flour: Made from the whole cassava root, this flour is not as starchy as tapioca. And since it subs 1:1 in recipes that call for traditional wheat flour, you can use it to make some of your favorite dishes grain-free. It’s certified paleo by the Paleo Foundation and Autoimmune Protocol friendly as well. (Available in stores and online; $17.99)

Simple Mills Artisan Bread Mix: Nosh on fresh baked paleo-friendly bread that you’d never guess is grain-free. Make it into flatbread, a loaf or divine fluffy rolls that are particularly delicious fresh out of the oven. (Available in stores and online; $7.99)

Julian Bakery Paleo Thin Crackers: These organic, vegan and paleo crackers, made with almond flour, cassava flour, seeds and garlic powder, are substantial and crunchy with a fairly neutral flavor, good for pairing with a mild creamy cheese. (Available online; $16.99 for two boxes)

Siete Grain-Free Tortillas: Created by a Mexican-American family of seven (hence “siete”) to help one of its members dealing with autoimmunity, these tortillas come in three varieties—almond flour with tapioca; cassava and coconut; and cassava and chia. Each flavor is made to replicate the taste and texture of corn, flour, or wheat tortillas. (Available in stores and online; $9 for a bag.) 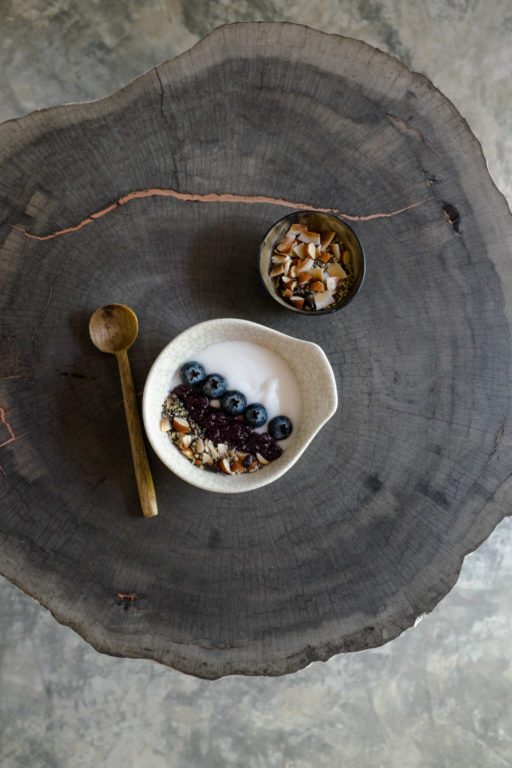 Recipe and photo from Daniella Hunter of The Real Coconut

In a heavy bottomed sauce pot, whisk together Coconut Milk, Tapioca, and Maple Syrup until smooth.

Heat over low flame until thickened, about 15 min. Stir occasionally with a rubber spatula.

Cover and leave to ferment at room temp for 32 hours. Check for tangy flavor after 24 hours if room temp is very warm. Store in fridge for up to 5 days.